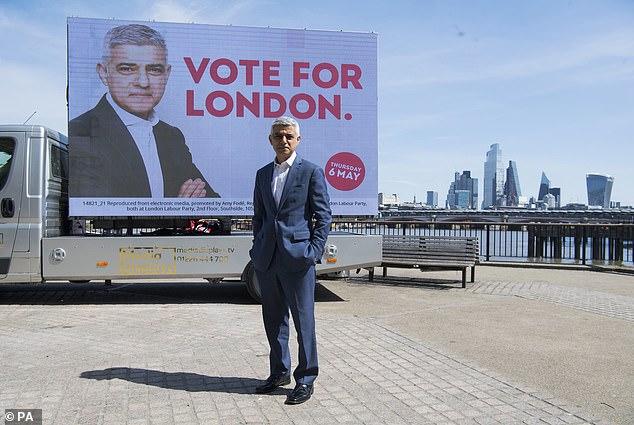 Sadiq Khan today announced he will axe the £15 seven-day congestion charge he imposed a year ago when he claimed Transport for London was about to go bust and needed a £1.6billion taxpayer-funded bailout.

The Labour Mayor of London, who is favourite to win on May 6, has been accused of making a pre-election promise voters will end up paying for after the election by returning to the £11.50 levy on weekdays only.

Mr Khan insists he would be ‘negotiating with the Government’ to reduce the charge if he continues at City Hall having already demanding billions to bail out the capital’s Tube, bus and train network during the pandemic.

A senior government source said of Sadiq: ‘I don’t think we’ll be writing him a cheque to help win the election’, while online critics demanded to know why he isn’t cutting the charge back to £11.50 today.

Mayor Khan is also planning to extend the £12.50-a-day ultra-low emission zone (Ulez) to the boundaries of the North and South Circular roads, costing London’s motorists millions more in taxes from October 25.

Tory MP for Wimbledon Stephen Hammond told MailOnline: ‘The Mayor’s only response is to any question is give me more money. The trouble Is that over the last five years Londoners have seen this Mayor’s financial waste and mismanagement leading to less investment and poor delivery of the services our communities need’.

He added: ‘Sadiq Khan’s record is one of broken promises on housing , on transport and on boosting local economies. If the Government gave him the money he asks for, Londoners would be worried he would just fail on his promise again.’

Last year Mayor Khan was today accused of risking lives and forcing people out of their cars and on to the Tube where social distancing is ‘impossible’ because of a lack of trains after he jacked up the central London congestion charge to £15 from £11.50 last June and made it seven days a week.

The Mayor of London also decided the daily charge, introduced by Ken Livingstone in 2003, would be extended out of rush hour from 6pm to 10pm – just hours after accepting a £1.6billion taxpayer-funded bailout from the Government.

He has frozen single fares every year since he became mayor in May 2016.

Sadiq Khan, who is standing for re-election, pictured today on the South Bank as he revealed he plans to axe the £15 seven-day congestion charge and return it to £11.50

As tens of thousands of people were forced to drive into London during the pandemic, only NHS workers were be able to claim it back.

‘The mayor decided to raise the Congestion Charge, and the mayor can choose to reverse it — today. The fact that he isn’t tells us everything we need to know.

‘As mayor, I’ll reverse the Congestion Charge hike on day one — no consultation, no studies, no ifs, no buts. This is the fresh start that London needs’.

Mr Khan insisted that he had to put it up as part of the Government’s first £1.6billion bailout for Transport for London last spring.

What are the charging times for London drivers?

He said today that he would be ‘negotiating with the Government’ to reduce the charge if he can continue as mayor.

The charge reduction has been a policy of Mr Khan’s rival Conservative mayoral candidate Shaun Bailey since June last year when he pledged to reverse the rise.

And critics claimed today that 50-year-old Mr Khan’s plans to abandon the levy were against his vow to avoid a ‘car-led recovery’ following the coronavirus pandemic.

The charge was initially suspended on March 23 last year so essential workers could drive in during lockdown but then brought back on May 18 amid a surge in traffic.

Now, the Evening Standard has reported how Mr Khan told LBC’s hustings that if he is re-elected: ‘I will be negotiating with the Government so we don’t have to have it seven days a week or up until 10pm.’

But Green candidate Sian Berry criticised Mr Khan’s comments as showing that he ‘simply isn’t serious about cutting traffic in London’, while Lib Dem hopeful Luisa Porritt condemned him as ‘a backwards-looking mayor with no forward-thinking plan for London’s recovery’

It comes as TfL plans to extend the £12.50-a-day ultra-low emission zone (Ulez) to the boundaries of the North and South Circular roads from October 25.

A Labour spokesman told the Standard: ‘Government ministers made it a requirement of the [second TfL] funding deal [in October] that the temporary changes to the congestion charge remained in place, and they rolled this condition forward when they extended the funding deal in March.

‘As Covid restrictions are eased and travel patterns change, Sadiq will – if re-elected – have discussions with the Government about the best arrangements to have in place to support London’s economic recovery and to ensure it is a green and sustainable one.

‘It is likely that temporary restrictions will need to remain in place until the autumn, whilst these discussions are conducted.’

The charge reduction has been a policy of Mr Khan’s rival Conservative mayoral candidate Shaun Bailey since June last year. Mr Bailey is pictured in the capital on April 22

It comes just over a fortnight after a study in Norway found the congestion charge has actually increased diesel pollution in the city centre.

The charge led to more buses and taxis in the capital, increasing levels of nitrogen dioxide – one of the most dangerous forms of pollution.

This was because journeys by diesel-powered buses and black taxis increased in the centre, pouring out harmful NO2 gas, the researchers said.

Colin Green, from the Norwegian University of Science and Technology, studied the impact of the charge brought in by the Greater London Authority in 2003.

He said: ‘The purpose was first and foremost to improve traffic flow. In central London, vehicles were at a standstill with the engine idling a third of the time.

‘The congestion charge eased the flow of traffic and also helped with air pollutants. But we saw an increase in the most harmful part of the pollution.’