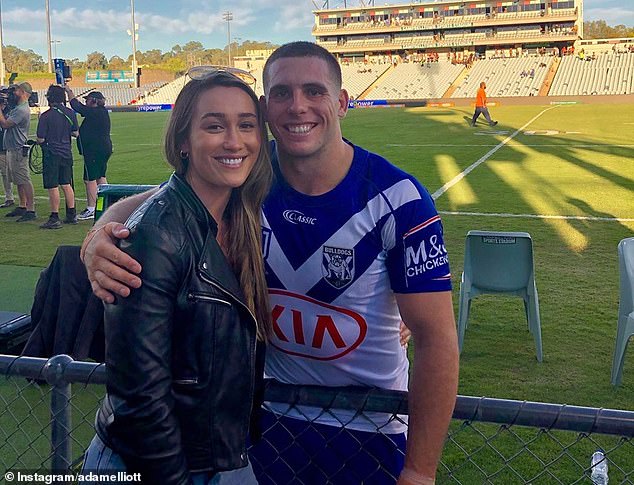 An NRL star caught in an ‘intimate act’ with an ex-teammate’s fiancee at a housewarming party has apologised for his behaviour.

Canterbury-Bankstown forward Adam Elliott, 26, issued a statement via the club on Saturday about the incident at Connells Point in Sydney’s south, on Sunday.

‘This is an extremely difficult time for my family and I. I ask that people can respect mine and my family’s privacy at this time,’ Elliot said in his statement.

‘In consultation with the club, I will be undertaking the necessary help that I require with appropriate measures and checks.

‘I would also like to take this opportunity to apologise to all Bulldogs members, fans and sponsors about recent events. I have brought unnecessary attention to the club.’

Lichaa has been charged by police with three offences, including common assault, over the incident.

The matter was in briefly mentioned in Sutherland Local Court this week, which Lichaa’s partner attended to show her support.

Lichaa was excused from the court proceedings after undergoing surgery to his hand.

Elliott had been expected to be a groomsman at Lichaa’s upcoming wedding.

Following the housewarming drama, Elliott’s partner Robyn and their nine-month-old son Lennex returned to the Northern Territory – but the couple are said to still be on speaking terms.

Canterbury also issued a statement on Saturday, acknowledging Elliott is a repeat offender when it comes to off-field indiscretions.

‘The Bulldogs have conducted their own review and have decided that Adam will undertake professional help in regard to issues with alcohol, with the Bulldogs to provide full support including a strict monitoring process,’ the club said in a statement.

Elliott, who has avoided any sanction from the NRL and is still to reach out to Lichaa, is no stranger to alcohol-fuelled moments with dire consequences.

In 2018, Elliott was fined $25,000 by the Bulldogs following his drunken antics on Mad Monday in September at the Harbour View Hotel in Sydney’s Rocks precinct.

Along with teammate Asipeli Fine, the pair were charged with wilful and obscene exposure and landed up in court.

Elliott later told the Daily Telegraph in February 2019 he experienced some ‘dark’ and ‘horrible times, but he had ‘learnt from what happened.’