The number of migrants risking their lives to cross the Channel in tiny boats in the first three months of 2021 has nearly tripled compared to the same period last year, shocking government figures reveal.

On Tuesday alone, some 148 people in six incidents tried to enter the UK as we experienced the hottest day of the year so far.

A further 81 people were then intercepted during another six incidents on Wednesday.

It comes as around 30 migrants, including young children and a man in a wheelchair, crossed the Channel earlier today despite worsening weather including 30mph winds. 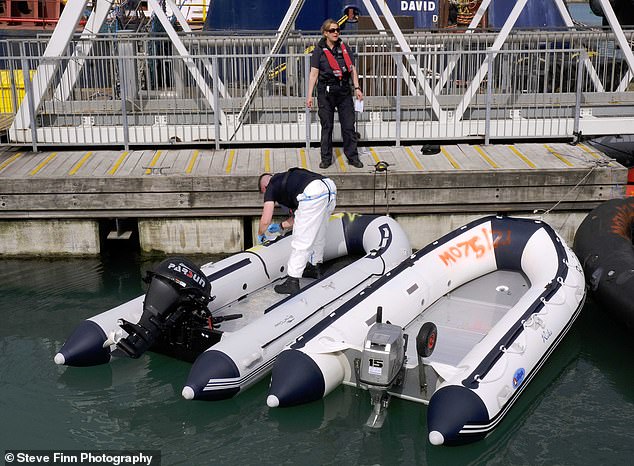 Tiny boats are kept in a holding area at Dover Marina on the Kent coast, called ‘The Graveyard’, as the number of migrants risking their lives continue to rise 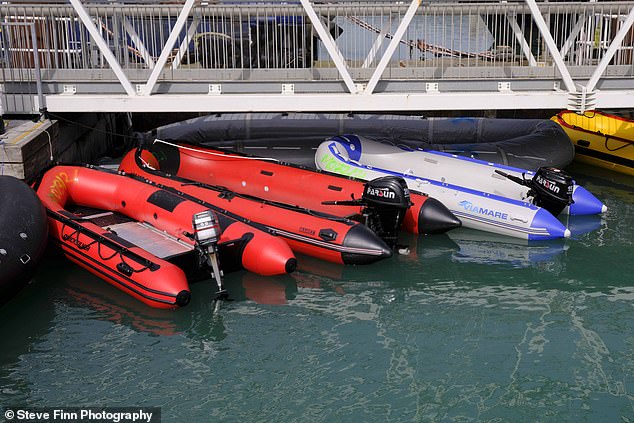 Figures reveal that the number of migrants risking their lives to cross the Channel in the first three months of 2021 has nearly tripled. Pictured: Boats are kept at the storage bay in Dover 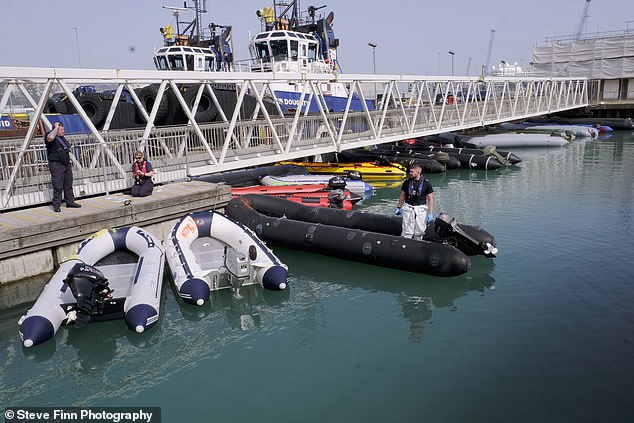 No crossings had been expected today as conditions deteriorated following this week’s mini-heatwave – which saw people smugglers taking advantage of the warm weather to traffick dozens of asylum seekers across from France.

But Border Force vessel Vigilant was seen unloading around 30 migrants shortly after midday at Dover Marina, Kent. The landing was was extremely late for the first arrivals of the day – which usually happen before dawn.

It came as stark images showed the tiny crafts used by the migrants, now stored in an area on the Kent coast called ‘The Graveyard’.

Some of the crudest vessels to have made it across were so unseaworthy they had visible holes in their hulls, adding extra dangers to those who pay thousands for the risky journey across the busiest shipping waters in the world in the hope of a better life.

The latest victory for people smugglers took place at Dover when a boat arrived carrying 12 people, including a heavily pregnant woman and children.

Each boat is disinfected against Covid when it has been seized before they are transported to private waters behind Dover Marina.

The flotilla of inflatable and hard-shell small craft, many powered by engines stolen from leisure boats based in the marinas around Calais, has been growing daily.

In a series of incidents more than 200 asylum seekers have made it to the Kent coast in recent days – in a bumper week for the people smugglers who prey on them.

On the other side of the Channel the French authorities prevented another seven attempted crossings this week involving 142 people, according to the Home Office. 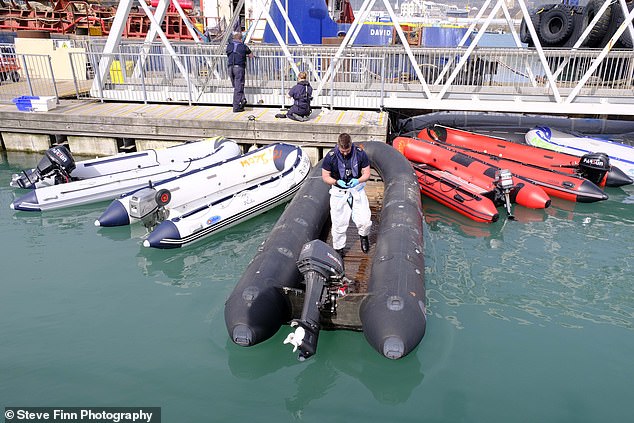 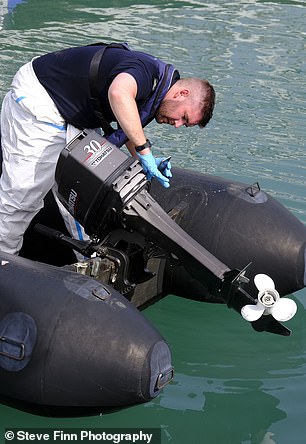 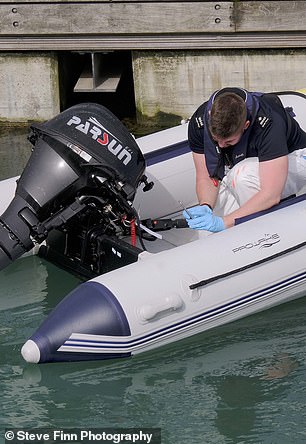 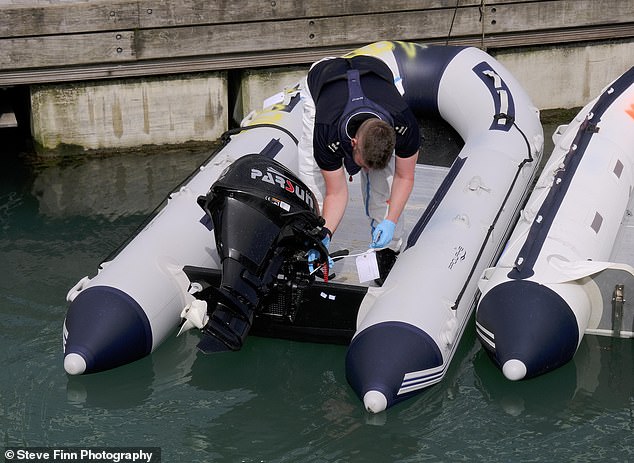 On Tuesday alone, some 148 people tried to enter the UK and a further 81 people were then intercepted during another six incidents on Wednesday 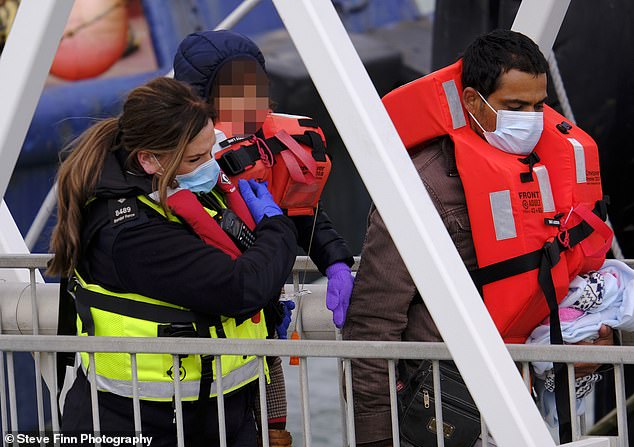 Around 30 more migrants, including young children, crossed the Channel and arrived in Dover earlier today

Home Secretary Priti Patel recently set out plans to target criminal organised gangs running crossings and change rules for asylum seekers so that people who arrive in the UK without permission will no longer have the same entitlements.

Chris Philp, minister for immigration compliance and justice, said the government plans to ‘break the business model of smuggling gangs and protect the lives of those they endanger’.

They were mostly led ashore at Dover but one group of a dozen landed on the beach along the coast at Dungeness after slipping past search boats.

Over 1,300 migrants have made the 21-mile journey so far this year, which is almost triple the 466 who arrived in the first three months of 2020. Last year saw an overall record of 8,400 arrivals.

One youngster was seen wearing a woolly hat shaped like a rabbit and another wore rainbow-coloured waterproof leggings as they stepped foot in the harbour.

Another toddler, who was too young to walk, had to be carried by an Immigration Enforcement officer.

And a disabled man was also seen needing a wheelchair to make his way up the gangway for processing.

All of the migrants were wearing red lifejackets and disposable face masks as they disembarked from a black Border Force vessel.

The Home Office is yet to confirm how many people have arrived on UK shores so far today but it is thought that there were around 30 on board. 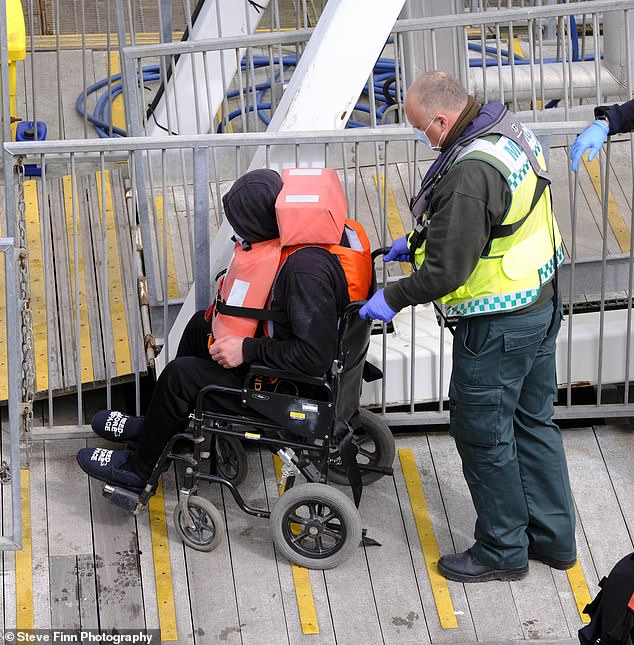 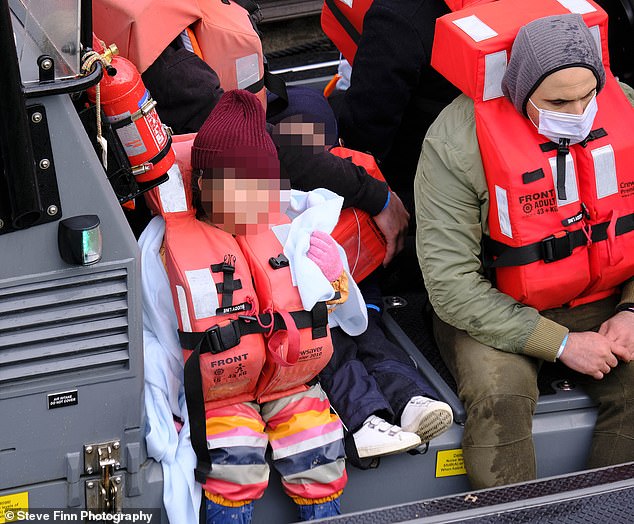 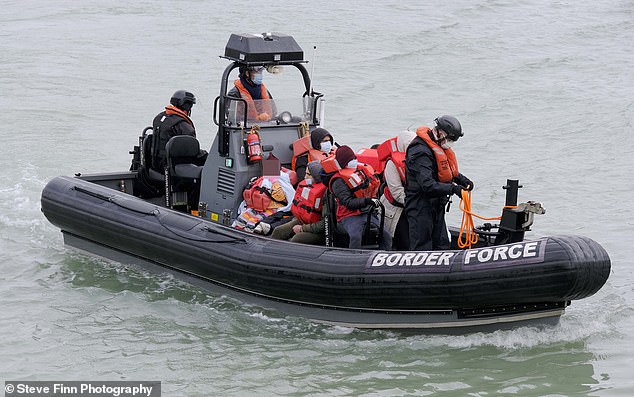 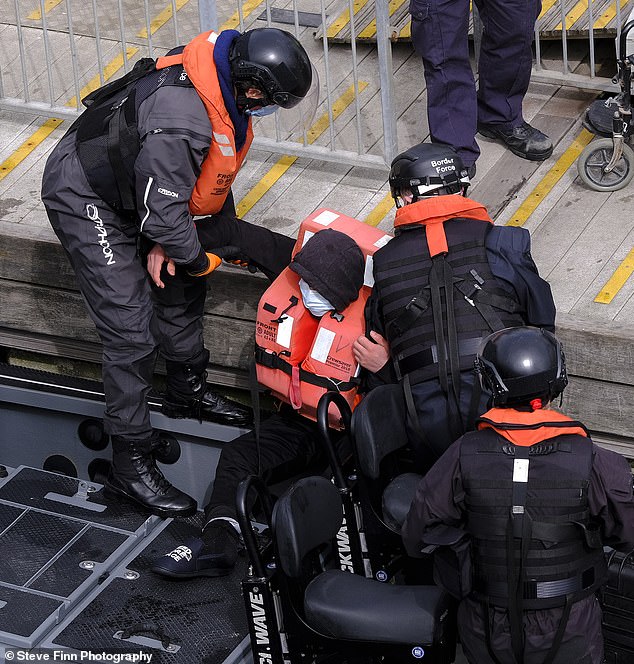 Immigration Enforcement officer having to help one man into a wheelchair after the boat arrived at Dover Marina, Kent, earlier today

The extremely risky crossing comes after 229 migrants made the trip across the busiest shipping route in the world in just two days as people smugglers took advantage of unseasonably warm weather in recent days.

It means 831 migrants made the dangerous journey in 42 vessels last month – more than four times the 187 who made the 21-mile trip in 13 boats in March last year.

The latest crossings come a week after Home Secretary Priti Patel announced a series of radical new policies for a ‘firm but fair’ immigration system. 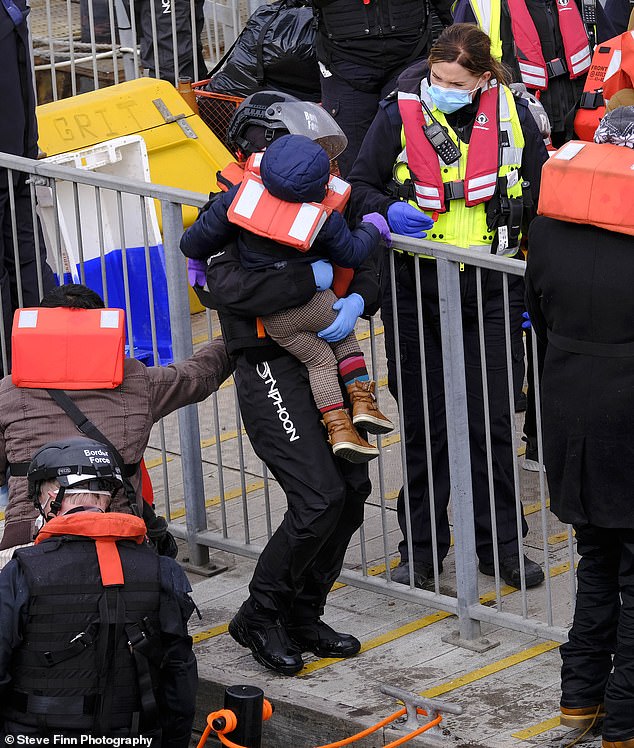 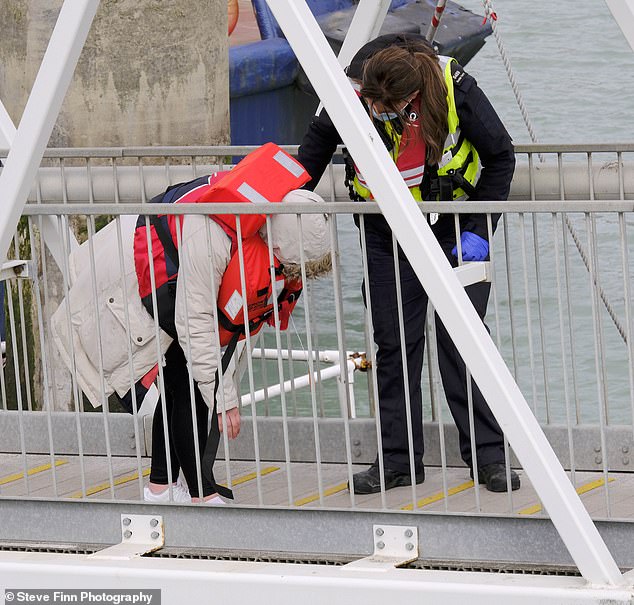 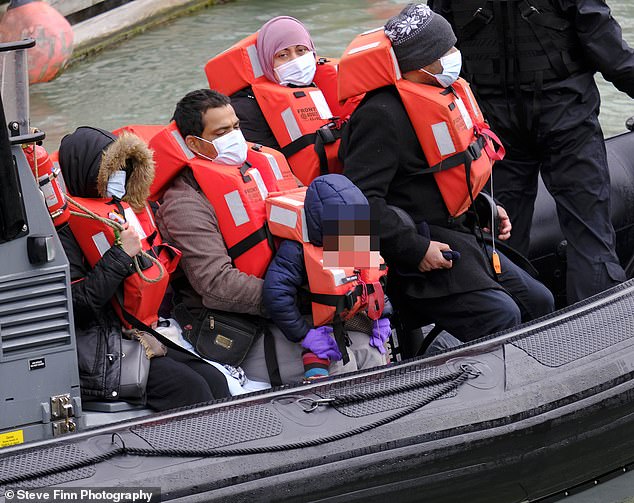 Minister for Immigration Compliance and Justice Chris Philp said on Wednesday: ‘People should claim asylum in the first safe European country they have travelled through.

‘Last week, we announced the most significant overhaul of our asylum system in decades – a new, comprehensive fair but firm long-term plan.

‘Under these plans, we will break the business model of smuggling gangs and protect the lives of those they endanger.’

Facebook on a new mission to curb COVID-19 vaccine misinformation