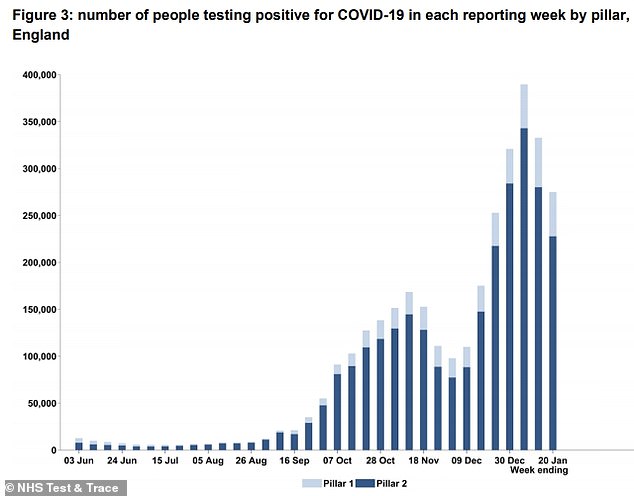 Coronavirus cases in England have fallen 17 per cent in a week amid brutal lockdown restrictions, official figures reveal.

Test and Trace said 274,898 people tested positive for the virus in the week to January 20, the lowest number since before Christmas and the second week in a row a dip has been recorded.

It is another glimmer of hope that measures are turning the tide on the second wave after separate statistics from a Government-commissioned study also showed cases were dipping in England – although scientists insisted the drop was ‘shallow’.

And Department of Health figures are indicating the number of Britons testing positive for the virus every day is falling – with yesterday’s figures 88 per cent below the levels two weeks ago.

Experts say lockdown is reducing transmission of the virus, although some worry this isn’t happening fast enough to relieve pressure on over-stretched hospitals.

Test and Trace – run by the Department of Health and private contracters – has been dogged by allegations it is too slow to reach positive cases and had failed to plan ahead for spiking numbers of infections in September when schools returned.

This graph shows the proportion of close contacts of positive cases who were asked to quarantine within 24 hours of the case being identified. It is essential to get contacts to quarantine quickly to stop them inadvertently spreading the virus

NEXT PANDEMIC IS A MATTER OF WHEN NOT IF, SAYS SCIENTIST

A leading British scientist has suggested another pandemic-causing ‘Disease X’ could be around the corner – and it is a matter of ‘when, not if’.

Professor Mark Woolhouse added that it is difficult to tell when such a disease may emerge, and the precise mechanism of how it comes out is always unpredictable.

The expert in infectious disease epidemiology at the University of Edinburgh said that pandemic flu is at the top of the list for outbreaks to be concerned about, but he added that there is a whole range of other viruses to be aware of.

Mr Woolhouse told how he and some colleagues got the World Health Organisation to add something called Disease X to its list of priority diseases four years ago.

He said: ‘We thought that the next emerging pandemic might be a virus that we don’t even know about yet – quite frankly we thought it was the most likely scenario.’

Mr Woolhouse added that in a meeting the following year experts considered what the disease might be, and one possibility they came up with was a novel coronavirus related to Mers or Sars.

The figures published today show almost 56,000 fewer Britons tested positive for the virus in the third week of January than the week before.

Test and Trace figures only pick up symptomatic cases – when someone gets a swab after suffering a high temperature, new continuous cough or loss of taste and smell.

But they leave out those that are infected but are not experiencing any symptoms of the virus.

The Health Minister Lord Bethell today warned one in three people who are infected with the virus do not suffer symptoms, ‘meaning you can infect others unknowingly’.

‘It is therefore crucial that we continue to follow public health guidance, and all play our part by following the rules and reducing our social contact to slow the spread of the virus,’ he said.

The figures also showed nine in ten people who go for tests are now receiving their results within 24 hours, in a boost to the system.

Test and Trace bosses added they managed to reach 85.9 per cent of all those who tested positive for the virus in the week to January 20.

And told 93.2 per cent of their close contacts to isolate, meaning fewer people were walking the high street after being exposed to someone who had tested positive.

There are more than 800 test sites now in operation across the UK, with a median distance of just 2.1 miles from someone’s home to a site.

It comes after the REACT-1 study admitted today that Covid-19 cases did start falling in the third week of lockdown, but said this was a ‘mixed’ picture across the country leaving many hospitals still under pressure.

Professor Paul Elliot, the director of the Imperial College London study, said infections rose slightly in the East Midlands over the first three weeks of the national shutdown and flattened in the West Midlands and the North.

‘I think it’s difficult to know (why this is happening),’ he said. ‘Certainly compared to the first lockdown, we know from mobility data that there is more activity happening generally, more people are going to work, the rules around the schools are slightly different to last time.

‘But also, you know, it really behoves us all to pay attention to the public health message. We know how the virus is transmitted through social contact, so the social distancing, face coverings and hand washing are extremely important.’

The study used random swabbing of 167,000 people in England to indicate about 1.57 per cent had the virus over the first three weeks of lockdown – the equivalent of almost 880,000 residents.

They also estimated the national R rate is 0.98, below the critical threshold of one, suggesting the second wave is receding as fewer people are catching the virus each week, but the decline is moving slowly.

Britain yesterday recorded another 25,308 coronavirus infections as the second wave continues to run out of steam during the third national lockdown — but it was the second deadliest day of the pandemic.

Department of Health statistics show the number of new cases is 35 per cent below last Wednesday, when 38,905 were recorded. It also marks an 88 per cent fall on the 47,525 infections announced two weeks ago.