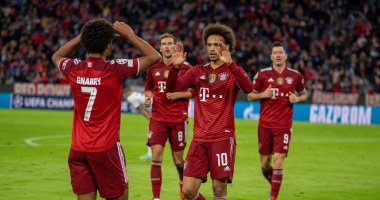 Bayern Munich seeks to continue its impressive start in the Bundesliga when it hosts its counterpart Eintracht Frankfurt, in the confrontation scheduled for Sunday evening, at the Allianz Arena, in the seventh round of the German League.

Bayern Munich’s official website stated that the Bavarian team collected 16 points in the first six rounds of the Bundesliga this season, achieving 5 victories and a draw, which is the best start for the Bavaria giants since the 2016-2017 season, when it also scored 16 points.

The two teams met in 100 previous matches in the German League, which witnessed the Bavarian team scoring 203 goals, achieving 55 victories, while Eintracht Frankfurt won 23 matches, and settled the tie as a result of 22 matches.

Bayern Munich also beat Eintracht Frankfurt in their last 12 matches at the Allianz Arena, and the Bavarian team maintains an unbeaten record at home in the last 30 matches in the Bundesliga (25 wins and 5 draws).

Bayern Munich achieved a series of distinguished victories throughout 7 consecutive meetings, starting with the German Super Cup after beating Borussia Dortmund 3-1 and crowning the title, then 5 German Badlory victories, in addition to defeating Barcelona by three in the opening of the Champions League campaign.

Is it better to eat before or after exercising?

Big storm on the east coast of the United States: news and forecasts