A nurse has warned against trying the ‘microwave poached egg hack’ after she was hospitalised with second-degree burns to her face and arms after attempting the popular cooking trick.

Alice Seymour, 27, from Manchester, said she’d seen the trick of making a poached egg in a microwave online and decided to try it after getting home from a shift.

But disaster soon hit when she opened the microwave door and the water exploded in her face, meaning she was rushed to hospital.

Cooking eggs in the microwave is dangerous because the yolk becomes ‘superheated’ and can then explode. 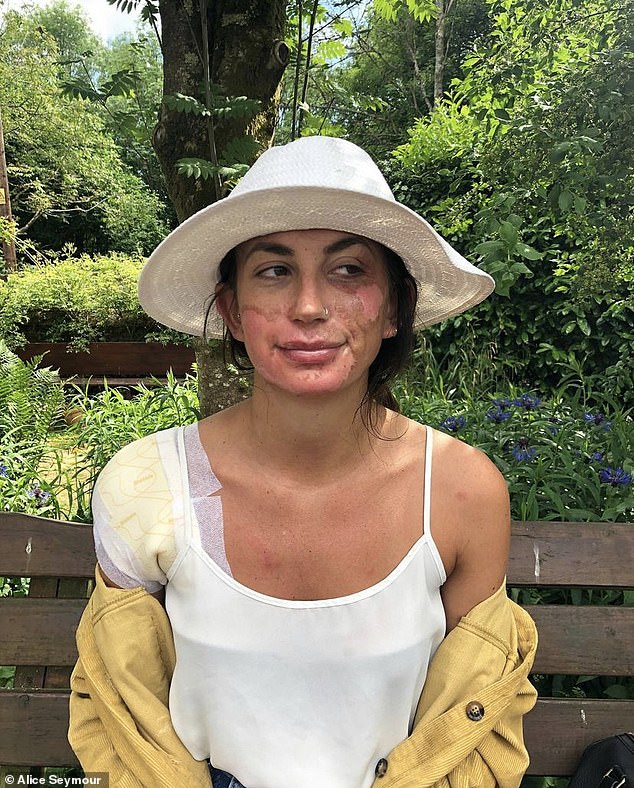 Alice Seymour, 27, from Manchester, has warned against trying the ‘microwave poached egg hack’ after she was hospitalised with second-degree burns to her face and arms after attempting the popular cooking trick

What are the dangers of microwaving eggs?

Cooking shelled eggs in a microwave is dangerous because the casing holds in heat.

This means that, once you’ve removed the egg from the microwave, it will carry on cooking itself, and any disruption can cause an explosion.

Similar dangers apply when cooking sunny side up or poached eggs in the microwave.

But once this is broken, the suddenly boil and release bubbles rapidly, causing what appears to be an explosion.

Speaking exclusively to FEMAIL, Alice said: ‘It was really scary.

‘I just got in from a shift, I’d put the hot water into the jug, cracked an egg in it, put it in the microwave.

‘It was the first time I’d tried it.

‘It just exploded. My boyfriend drove me to A&E and I was in so much pain.

‘I kind had to guess what had happened,’ she added.

Following the 2019 accident, Alice, who was 25 at the time, had to take a month off work to avoid contracting an infection.

She added that if she wasn’t wearing her glasses her would have been blinded and that’s she speaking out now after seeing stories of other people being injured in the same way.

‘Just don’t do it, poached your egg in a pan,’ she added. 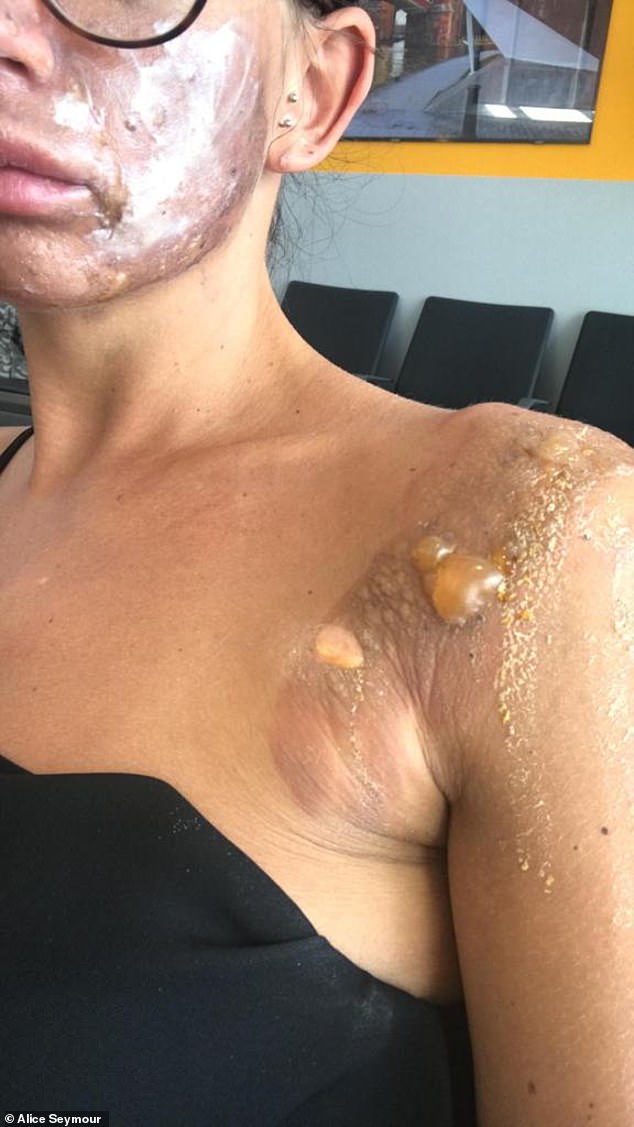 Speaking to FEMAIL, Alice said she was ‘scared’ as her boyfriend rushed her to hospital. Her injury is pictured 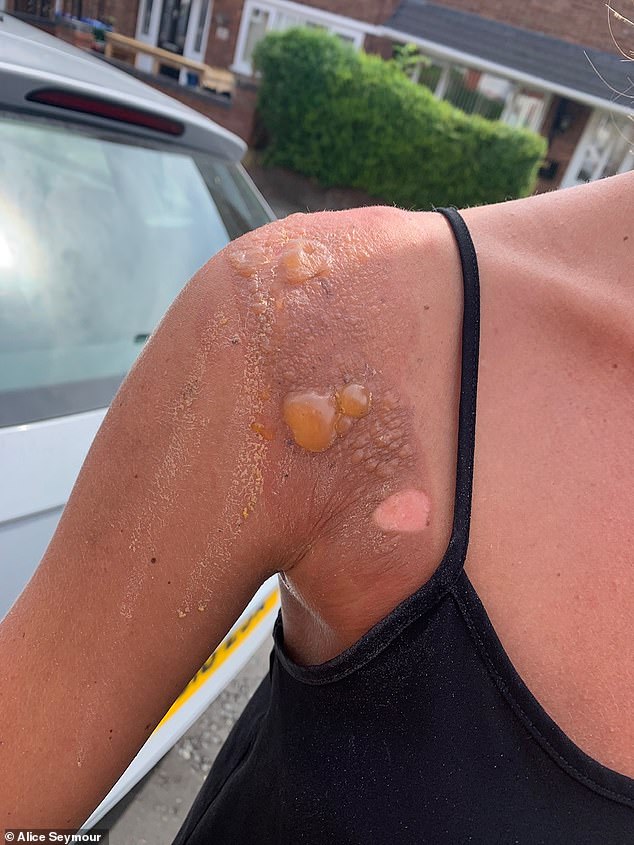 Following the 2019 accident, Alice, who was 25 at the time, had to take a month off work to avoid contracting an infection 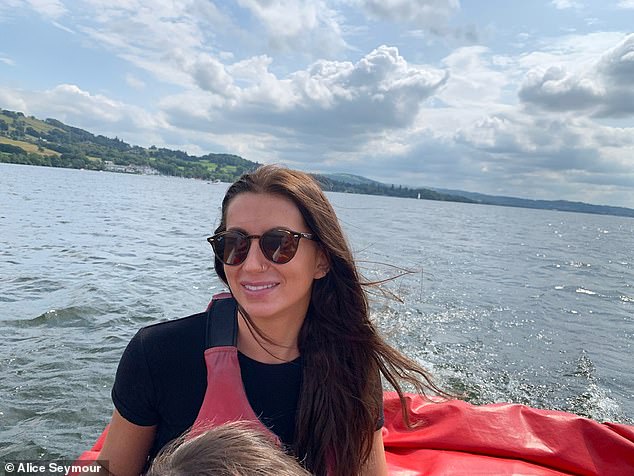 Alice added that if she wasn’t wearing her glasses her would have been blinded and that’s she speaking out now after seeing stories of other people being injured in the same way. She is pictured now, recovered

It comes after a mother-of-two was left with burns to her face, neck and chest after attempting the hack, which was shown recently on Loose Women.

Áine Lynch, 35, from Mayobridge, Co Down, Northern Ireland, was watching Loose Women on 15th April when panellist Frankie Bridge showed off a hack to cook poached eggs in the microwave.

The former Saturdays singer taught her fellow presenters and viewers at home – how to crack an egg into a mug filled partly with water and place it in the microwave. 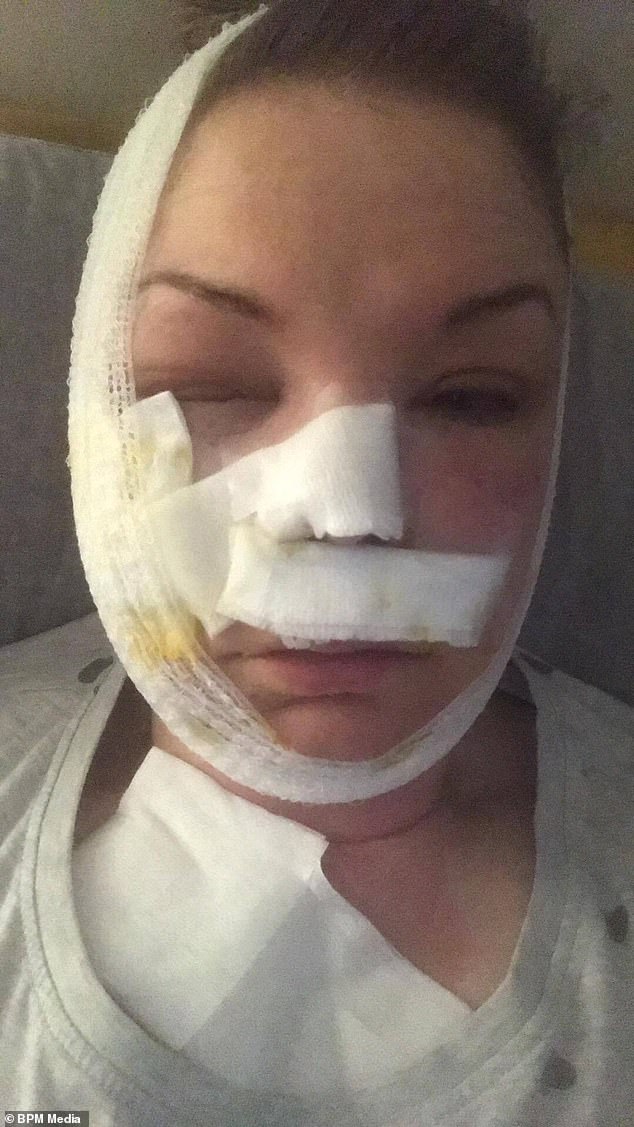 A mother-of-two has been left with burns to her face, neck and chest after attempting a hack shown recently on Loose Women. Áine Lynch, 35, from Mayobridge, Co Down, Northern Ireland, had been watching Loose Women on 15th April when panellist Frankie Bridge showed off a hack to cook poached eggs in the microwave, but was left burned (pictured in hospital) 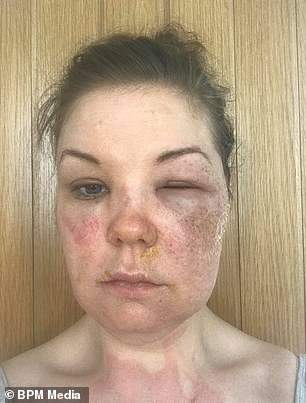 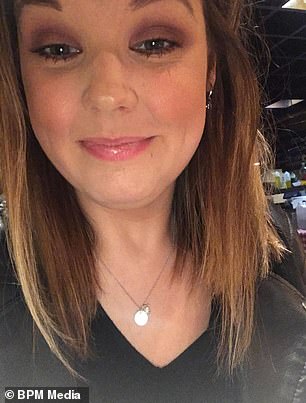 Áine, a mother-of-two who works as a client executive for Vodafone was scarred after the egg exploded in her face, she is pictured left after and right before

‘My emotions are really erratic now too, one minute I’m fine the next I’m crying my eyes out. I’m so afraid of being left with permanent scarring on my face.’

Explaining how she got her injury, Aine said:  ‘On Saturday morning, my husband Johnny and I both got up and got the kids sorted out with breakfast and I started to make us breakfast at about 10.30am.

‘I’d seen this hack on Loose Women and thought I’d give poached eggs and bacon a go.

‘I filled a mug halfway with water, swirled it, cracked an egg in and put it on for 60 seconds,’

‘The egg came out overdone so I got another mug and did the same, only this time I put it in for 50 seconds.

‘Once it was done, I lifted the mug out of the microwave and within seconds the egg exploded and sprayed the boiling water all over my chest, neck and face.

‘I just started screaming for Johnny to come and I ran into the bathroom and started covering my chest and face in cold water.

‘I soaked two flannels and kept the wounds cool while Johnny ran to our local chemist where Paul, the pharmacist, gave him cream and a burns pad and advised we go to A&E,’ Áine, who has two young children, aged 22 months and 12 weeks added.

Áine hopes that she can spread awareness and warn others about the dangers of trying hacks like this one.

‘We’re very lucky, but even though it was just a 10-minute drive it felt like hours because the pain was excruciating.

‘I was taken straight in, without Johnny because of Covid restrictions, and the nurses covered me in burns pads and blankets because my body was shivering with the cold caused by shock.

‘All that kept going though my head was thank God I didn’t have one of the kids in my arms, especially my youngest as I’m usually holding her.

‘I was in A&E for five hours and sent home with a bag of pain relief and lotions and dressings.’ 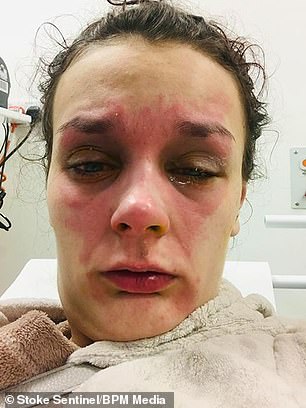 Courtney Wood, 19, was left in excruciating pain after an egg exploded in her face

‘Thankfully Johnny’s work is very understanding and have given him the week off to look after the kids because the pain killers are so strong they leave me a bit drowsy, so it’s not safe to be alone with them’.

In 2018, a 55-year-old grandmother was hospitalised and left bandaged ‘like a mummy’ after her poached egg made in the microwave exploded – shooting a jet of scalding steam onto her face.

Diane Cobb, 55, from Accrington, Greater Manchester, cooked an egg in a mug of water by blasting it in the microwave for 60 seconds, after being inspired by a foodie she had seen online.

But as she placed her spoon in the mug the egg ‘blew’ and fired a scalding spray onto her face, neck and chest and the corner of her eye.

The horrified mother-of-four was taken to hospital and spent four days receiving treatment in a specialist burns unit.

The full-time carer, who wanted a bacon and egg sandwich for lunch, said she had cooked eggs in exactly the same way at least 20 times before without any problem.

In another case, care worker Courtney Wood, then 19, was left in excruciating pain with blistering skin when an egg she was cooking in the microwave exploded in her face, while she was making breakfast on Boxing Day 2018.

The teenager, from Newcastle, said that the egg exploded after she popped it in the microwave in a jug with a bit of water for a minute.

She said: ‘The microwave didn’t ping so I took the egg back out, popped it on the side and checked on the bacon. When I turned back towards the jug the egg exploded in my face.’ 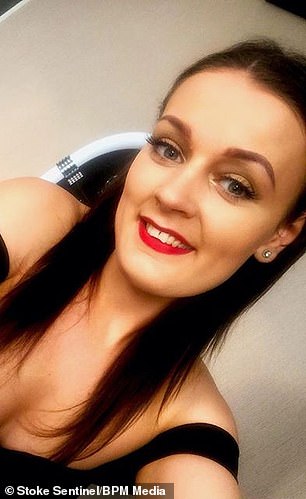 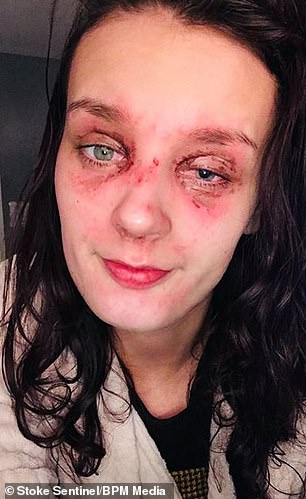 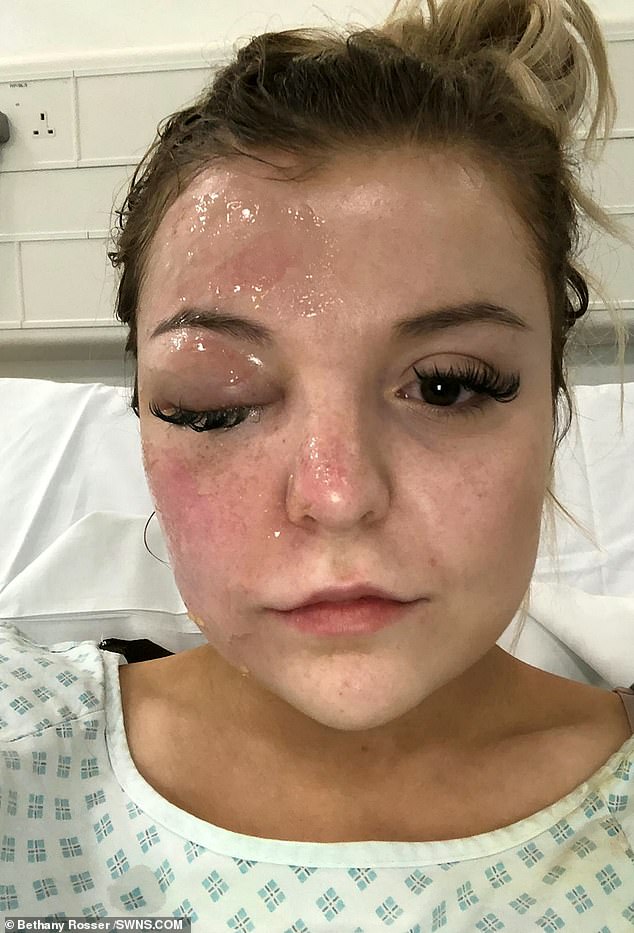 Elsewhere, Bethany Rosser, 22,  from Redditch was blinded in one eye after two microwave boiled eggs exploded in her face when she microwaved them for six minutes, following instructions online.

She had read online that it was safe to microwave eggs in water so long as she added salt.

When Ms Rosser checked to see if they were ready to eat, they exploded and hit the right side of her face.

She warned against people following the ‘endless’ websites and YouTube videos that say you can cook eggs safely in a microwave.

The insurance worker says she read instruction on food website Delish that advised cooking eggs for between six and eight minutes.

BURNS – WHAT ARE THEY, AND HOW DO YOU TREAT THEM?

Burns are damage to the skin caused by dry heat, such as an iron or a fire.

This is different to scalds, which occur due to wet heat like hot water or steam.

Burns can be very painful and may cause:

But the amount of pain a person feels is not always related to how serious the burn is.

Even a very serious burn can be painless.

To treat a burn:

Pregnant women, children under five, the elderly, those with a weak immune system and people suffering from a medical condition, like diabetes, should also go to hospital.

Treatment depends on what layers of the skin are affected.

In severe cases, a skin graft may be required.

Tesla stock price prediction for May after Q1 revenue soared 74%