Milking it for viral fame! Nursing bridesmaid is pictured PUMPING during wedding photoshoot as the photographer captures ‘what the day truly looked like’

One of the most memorable photos to come out of one Florida wedding wasn’t perfectly poised and polished — but it was real.

Photographer Amber Fletcher was shooting a wedding in the Sunshine State last October when she finished up shooting the groomsmen and turned to the bridesmaids.

The matron of honor, Allison Helper, was still in the middle of pumping breastmilk — but instead of waiting, Amber snapped a fun posed shot of the women in the woods, with Allison still pumping away. 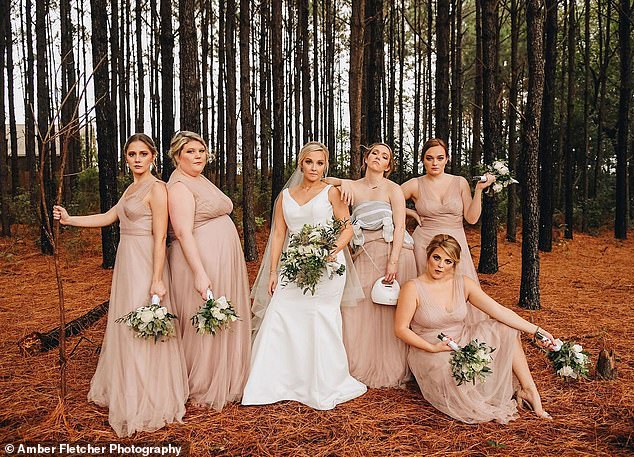 Real life: At her friend Rachael Downs’ wedding, matron of honor Allison Helper posed for a picture in the middle of pumping

‘What happened moments coming up on the photo was that I finished the groomsmen a little early and Allison was still pumping,’ the photographer told People.

‘I always do a photo like the Bridesmaids movie cover, so this seemed like the perfect time to utilize not only that photo in a humorous way, but to show the realness of the specific day.’

So she had Allison, bride Rachael Downs, and the other four bridesmaids all pose together in a relaxed stance.

Each wore matching blush dresses, but Allison’s was pulled down to her waist, with the pump attached and a towel covering her on top.

‘It brought light to what a day looks like for a bridesmaid who is currently breastfeeding/pumping,’ said the photographer. ‘Rachael (the bride) and Allison (the one pumping) were down with it as it’s what the day truly looked like in a way and they are all for normalizing breastfeeding and pumping.’

The bride told Today that she also nursed her daughter — for 18 months — and even pumped at Allison’s wedding. 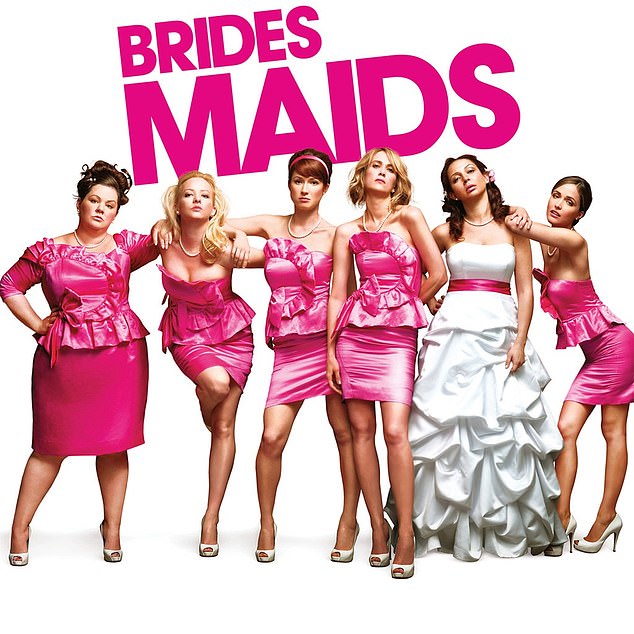 Inspo: Photographer Amber Fletcher said she always likes to do a Bridesmaids-inspired shot, but this one was particularly special

She said she ‘never thought it would blow up the way it did’ but ‘I’m glad it did.’

The photo has earned a fair bit of attention on Facebook, where commenters are pouring on the praise.

‘I love this. Support for the bride by being present and support for the bridesmaid by not making a fuss over her having to pump. I wish I had friends like these. Women building women up and not being selfish. LOVE IT!’ wrote one.

‘I love how they look like bridal thugs in this shot. This bride is absolutely fantastic. What a treasure of a friend! I see way too many stories in my breastfeeding groups about bridezillas throwing fits over the party leaving for any reason or “inconveniencing” the wedding in any way,’ said another.

‘What a bride! She looks so happy. kudos to the pumping mum. Everybody should have friends like this!’ wrote a third.

‘Kudos to you, that amazing bride/friend (not a selfish bone in her body), and this momma who said “I can be a good mom, and good friend, AND take care of my needs simultaneously.”’ commented yet another.