Chlöe Swarbrick made history in October this year when she became just the second Green MP to win an electorate seat in New Zealand – and she’s already proved to be a thorn in the side of Prime Minister Jacinda Ardern.

The 26-year-old’s victory in the Auckland Central electorate is even more astonishing considering Ardern tried and failed twice to turn the long-time National stronghold over to her Labour Party.

And with plenty of time on her side, there’s no telling what else Swarbrick could achieve. 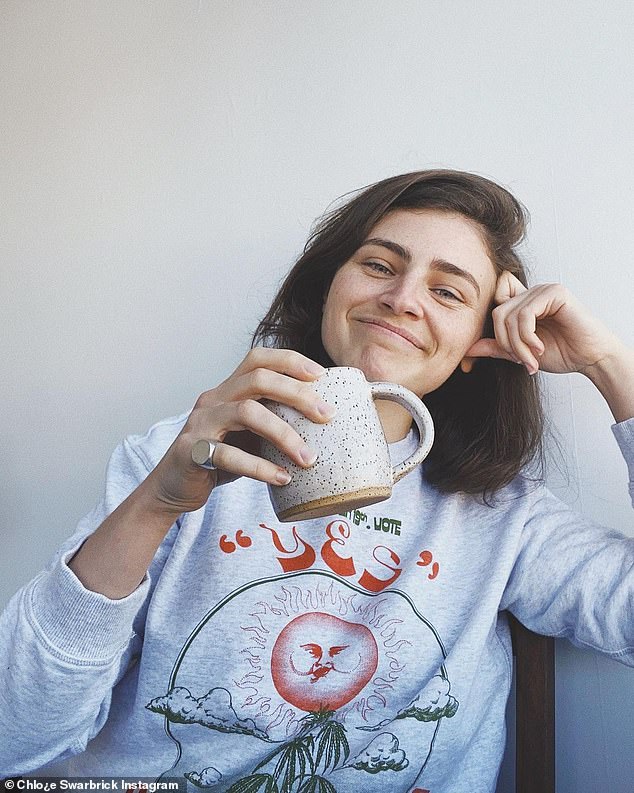 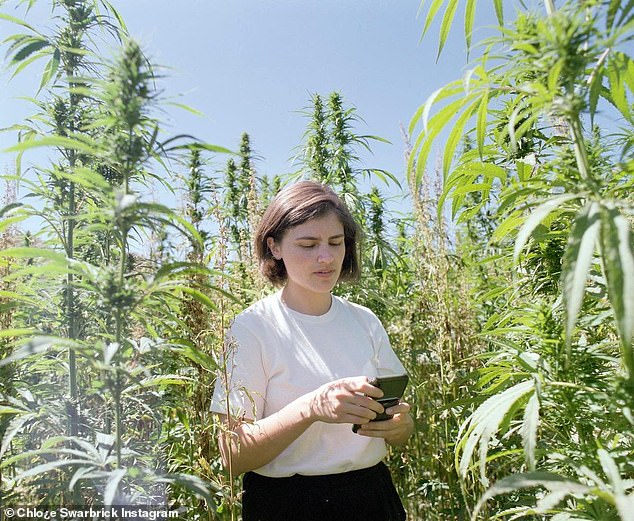 The young MP, a staunch advocate for legalising cannabis, didn’t always have her sights set on becoming a lawmaker.

Swarbrick was a philosophy and law student, ran an art gallery and coffee shop and worked as a radio journalist before being drawn to politics at the tender age of 22.

Uninspired by the potential candidates, she decided to run for Mayor of Auckland in 2016.

At the time, she said she was frustrated by low voter turnout and simply wanted to help boost engagement.

‘I wanted to energise people, stir up some controversy and make some changes to the status quo. I wanted to make people realise just how much impact councils have on their individual lives,’ she told Verve magazine. 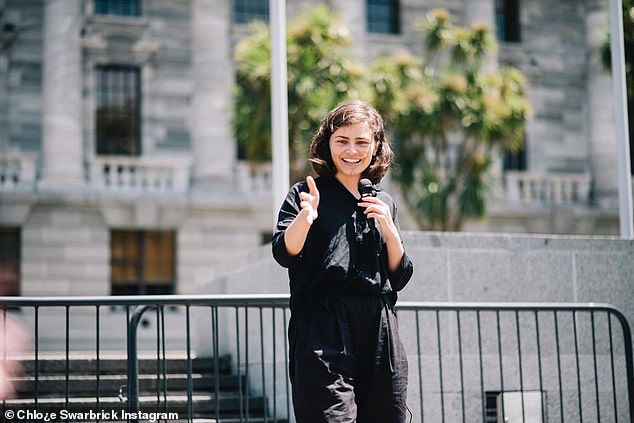 Uninspired by the potential candidates, she decided run for Mayor of Auckland in 2016 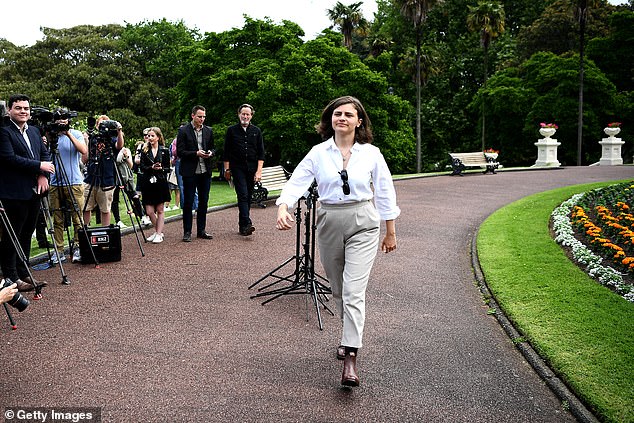 Sawbrick grew up in the Auckland suburb of Hillsborough in a house filled with National voters, but found the Greens were more aligned with her views on the world

But Swarbrick still managed to secure 30,000 votes – an impressive feat for someone running a campaign on a shoestring budget.

In the following year she was elected to parliament as a list member for the Green Party and began to make waves among the millennials.

In New Zealand, list parliamentary positions are filled by giving parties a certain number of seats based on the percentage of the overall vote they win, then allowing the parties to pick who fills the seats.

Sawbrick grew up in Hillsborough in a house filled with National voters, but found the Greens were more aligned with her views.

‘I was raised on a robust diet of politics and philosophy,’ she explained.

‘To that extent I have always had a healthy appetite for critiquing and holding accountable those at the top of the pecking order.’ 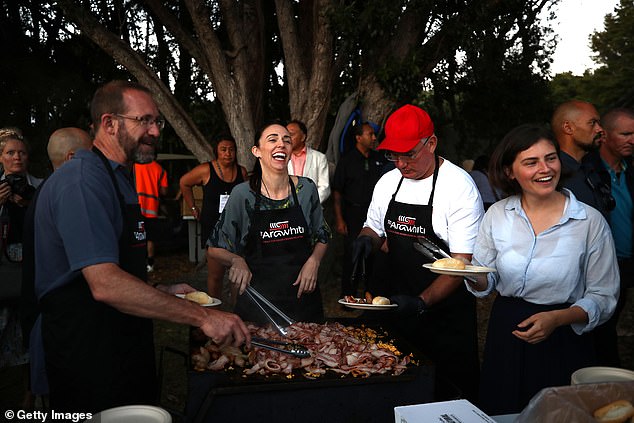 In October this year, Swarbrick, 26, (Pictured with Labour’s Andrew Little, Jacinda Ardern and Kelvin Davis) won the Auckland Central electorate – a seat Jacinda Ardern twice failed to turn over to her Labour Party 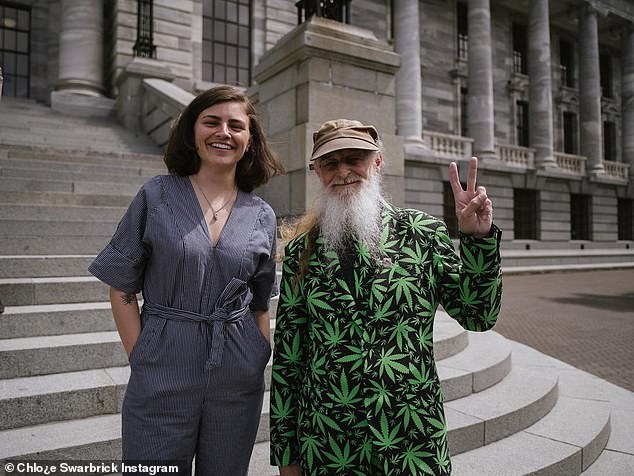 During the 2020 election Swarbrick’s focus was on youth-oriented issues such as mental health, education, housing affordability and cannabis legalisation

Her most prominent moment came in November last year when she went viral for her witty retort during her Parliamentary address.

She was in the middle of a speech about climate change when she was interrupted by a heckler.

‘OK, boomer,’ she quipped, drawing attention to the generational gap between herself and her fellow politicians.

‘OK boomer’ is a Generation Z and millennial retort to older people who are out of touch with younger generations.

In a text message to Stuff, Ms Swarbrick explained the term is a ‘simple summarisation of collective exhaustion’.

What does ‘boomer’ mean?

Boomer, short for baby boomer, is slang used for people born in the years after the Second World War.

It refers to the marginal increase in birth rate in the post-war era.

The generation that reached adulthood in the early 2000s is referred to as Generation Y or Millennials.

With climate change increasingly evident in recent years, young people, including 16-year-old Swedish activist Greta Thunberg, have taken a stand in a bid to save the planet for their and their children’s futures.

Some youths have accused the ‘boomer’ generation before them of causing the climate crisis by polluting the planet and using up non-renewable resources.

In this sense, the term ‘boomer’ has been used as an insult.

When she first announced she was standing for the Auckland Central electorate for the 2020 election, her competitor, Labour’s Helen White labelled her a ‘celebrity nominee’.

Swarbrick decided once again to shake things up.

Unlike most other Greens candidates, who aim for the party vote, Swarbrick ran a two-tick campaign, ultimately splitting the left-wing vote.

Her focus was on youth-oriented issues such as mental health, education and housing affordability.

Speaking to the New Zealand Herald, she said her win proved young people care about politics.

‘We don’t have to accept politics that is uninspiring, non-transformational, blase and boring. It should not be a chore. It should be something we are excited by and is genuinely representative.’

But Swarbrick doesn’t just want to remain a youth-focused MP. She has been studying public policy and economics and has her sights set on one day taking on the economics portfolio.

Her ultimate goal, however, is to make the House of Representatives a true representation of New Zealand.

‘The key is greater devolution of power, and greater connections with communities because there is a massive gap between those making decisions, and those who the decisions impact on.’