A police officer who lost his leg when he was hit by a drunk-driver is ‘absolutely disgusted’ that the man could be released on licence just 10 months into a five-year jail sentence.

Hayden Brown, then 25, was found guilty of three counts of causing serious injury by dangerous driving at Reading Crown Court, and sentenced in December last year.

He was almost twice the legal drink drive limit and had been taking cocaine when the silver Ford Focus he was driving hit Thames Valley Police Constables Thomas Dorman and Wai-man Lam in Maidenhead in September 2018.

Thomas Dorman, now a Sergeant, needed to have his left leg amputated below the knee as a result of the crash, while his colleague suffered puncture wounds, fractured ribs, a dislocated shoulder and severe bruising to his legs. 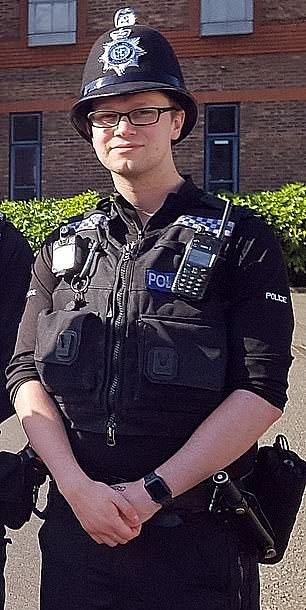 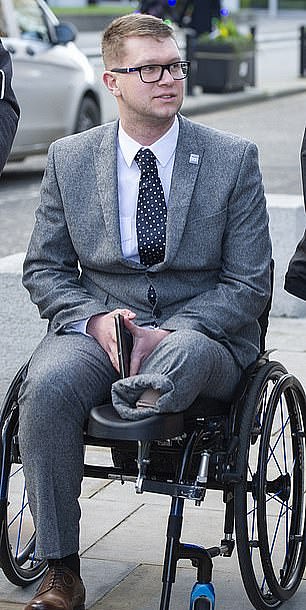 Thomas Dorman pictured left, before the crash, and right, outside court in December last year.  The Sergeant said he is ‘absolutely disgusted’ that Hayden Brown could be released on licence

A 19-year-old female passenger in the car being driven by Brown, from Maidenhead, broke 24 bones and suffered internal injuries.

It is understood Brown has been moved to an open prison, making him eligible for release on temporary licence.

Sergeant Dorman, who previously said he thought Brown’s five-year sentence was too lenient, believes he and the other victims have been sentenced to a ‘lifetime of punishment’ and that the ‘justice system is flawed’.

He said: ‘Where is the justice for the victim?

‘I am absolutely disgusted to find out that Hayden Brown has been already moved to an open prison and will now be allowed to be temporarily released on licence.

‘He’s served 10 months of a five-year sentence. What an insult. The justice system is broken and failing victims of crime. 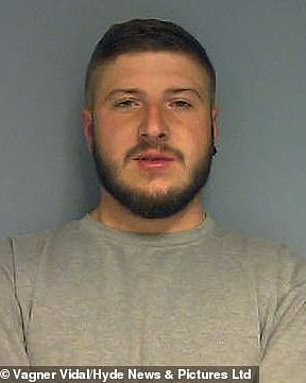 Hayden Brown, pictured above, then 25, was previously found guilty of three counts of causing serious injury by dangerous driving

‘How can the system be so fundamentally flawed that his actions effectively sentenced myself, my crew mate and his passenger to a lifetime of punishment, but he gets to leave prison months later?

‘How is this protecting our protectors and creating a culture where criminals who harm officers face the full consequences for their actions?’

Sergeant Dorman is calling for Prime Minister Boris Johnson and Home Secretary Priti Patel to look into the case.

Craig O’Leary, Thames Valley Police Federation chairman, added: ‘We are shocked and appalled to hear that Brown will not serve the full five years he was handed.

‘Brown chose to get behind the wheel, having drunk alcohol and taken cocaine. In doing so he drove into two police officers.

‘His actions that day changed Tom’s life forever, and yet Brown has spent only a few short months behind bars. 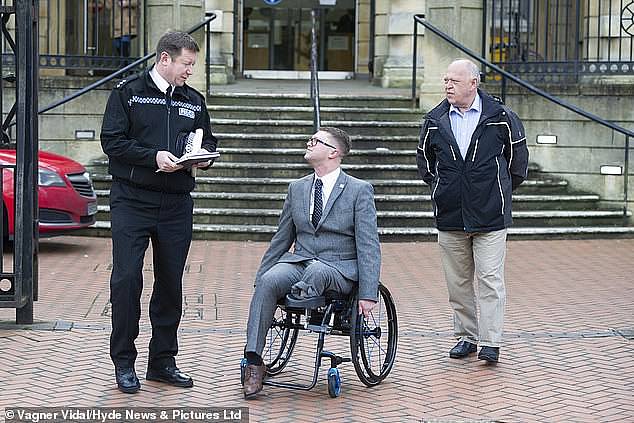 Sergeant Dorman, pictured outside court last year, believes he and the other victims have been sentenced to a ‘lifetime of punishment’ and that the ‘justice system is flawed’

‘How is this justice for these officers? How can he be deemed safe to roam society? How will his sentence act as a deterrent?

‘Police officers around the country will be disgusted to hear that Brown will walk free after such a short time behind bars.’

A Ministry of Justice spokesman said: ‘Drink drivers ruin lives which is why we are introducing tougher sentences so they feel the full force of the law.

‘Offenders in open jails face strict conditions and can be returned to closed prison if they breach them.’

Armenia says its fighter jet ‘shot down by Turkey’