Officers have revealed how baying crowds shouted ‘light them up’ after a man doused them in petrol – as shocking new footage of the incident emerged today.

The aerial footage, shot by a police helicopter, shows a grey-track-suited man running at a group of police officers while carrying a petrol can.

As he nears the officers, the man stops to throw fuel over the group before lobbing the can and running away.

Officers could reportedly hear the crowd saying ‘who’s got matches, who’s got a lighter, let’s set them on fire’.

The footage, taken during an incident in Basildon, Essex, in May 2019, has emerged as part of a new documentary released today. 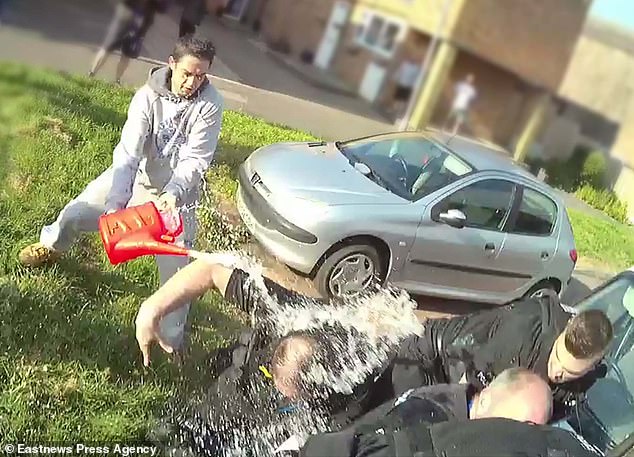 Aired on BBC, the documentary, named Critical Incident, featured officers who looked back on what happened on that day, which with from a police chase.

Officers on duty in Canvey Island were monitoring an organised event when they were made aware of a motorbike being ridden dangerously.

An eight-mile pursuit, involving a police helicopter, ensued, ending with police attempting to make the arrest of a youth at an estate in Basildon.

It was then the man, later named as Justin Jackson, then 28, attacked the officers with the petrol.

A large crowd of around 20 to 30 people gathered to watch the incident.

PC Andrew Bird, PC Matthew Cutts and Chief Inspector Jonathan Baldwin were all at the scene and have spoken openly about the events that unfolded that day.

Speaking during the documentary, one of the officers, PC Andrew Bird, said: ‘As I was trying to control a gentleman who had run out of the middle of nowhere this other chap has appeared with a watering can. 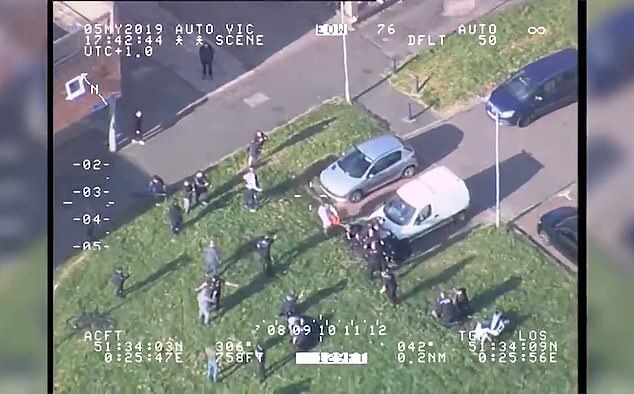 Footage of the attack was also captured by police helicopter. Then yob flicks the noxious fluid into his face before being knocked over and running from the scene 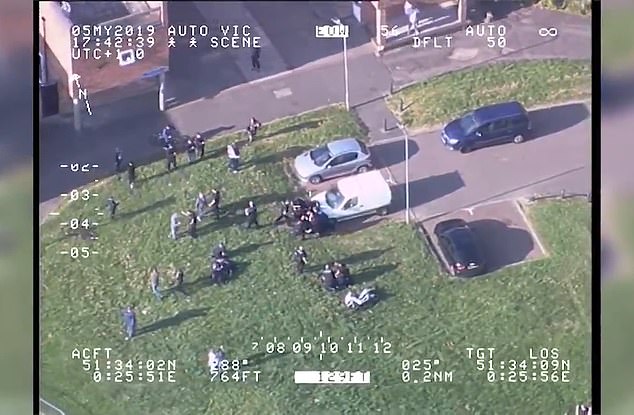 Jackson attacked the officers as police tried to arrest a youth riding a stolen motorbike in Basildon, Essex 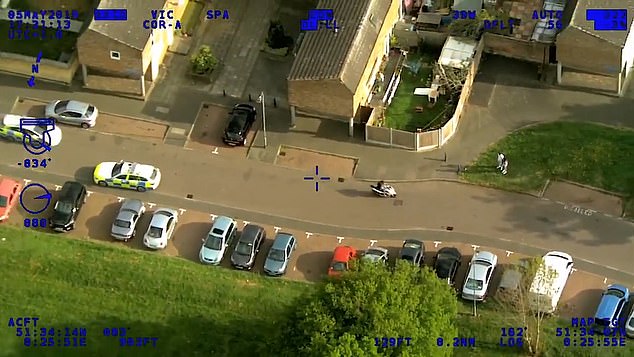 Aired today on BBC, a documentary, named Critical Incident, featured officers who looked back on what happened on that day, which with from a police chase (pictured)

His colleague, PC Matthew Cutts, stepped in to fend off the new attacker.

He said: ‘I could smell petrol so I sort of fumbled around to get my baton out but once I’ve got it out I’ve put it behind my head and just struck him in line with my training.

‘It’s not a random act of violence, it’s a controlled measure that we are taught to use to get people away from us.’

PC Cutts, who was unaware of the contents of the watering can, then started to feel his skin stinging and tingling down the front of his body. 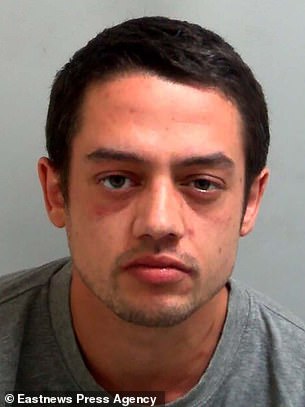 Jackson (pictured) appeared in Basildon Crown Court last year, where he was jailed for three years and nine months for eight counts of administering a noxious substance with intent to injury, aggrieve or annoy

The team began to panic as some of the watching crowd were smoking.

The officers were also armed with tasers which could have sparked and set fire to the petrol.

Chief Inspector Jonathan Baldwin said: ‘I was hearing them shout ‘light them up’.

‘I don’t know how we didn’t just cut and run but then that’s not the way we’re wired – we all stuck together.

‘There’s something running in the core of us that says you don’t run away from the danger, you run towards it.’

He added: ‘One match, one lighter, one spark could result in us going up in flames and being disfigured for life or possibly even dead.’

A large back up team of around 90 officers raced to the scene and several people were arrested.

Jackson later appeared at Basildon Crown Court and pleaded guilty to eight counts of administering a noxious substance with intent to cause injury.

During the hearing, police body-cam footage showed Jackson chucking the petrol over the eight officers.

CI Baldwin, reading from his victim impact statement in court, said: ‘At the time of the incident while being covered with petrol I remember thinking “we could all go up in flames here like Roman candles”.’

He said he could not see if anyone was smoking in the vicinity, adding: ‘It was one of those days I realised I might not have got home at all.’

‘This was in my view a calculated attack carried out without regard for the lives of police officers, their loved ones and others who were nearby at the time,’ he said.

He said that some people came out from their homes carrying kitchen pans full of water and inviting officers to use their sinks and showers to help them.

‘These particular memories have helped me keep a tight grip on the hope that what some people did that day is not representative of the wider community,’ said Mr Baldwin.

Judge Samantha Cohen, sentencing Jackson in November 2019, said it must have been a ‘terrifying experience’ for the police officers and found that Jackson did it to prevent them from making arrests.

She said: ‘Initially some (of the officers) thought they were splashed with a disfiguring acid or bleach, but when they smelled it was petrol they feared they would be set alight.’

Judge Cohen praised the officers involved as a ‘credit to their force’.

Jackson, of Ward Close, Basildon, was jailed for three years and nine months.

During the hearing the court heard he had written an apology to the officers and claimed her was ‘just trying to defuse the situation.’

Investing Show: Can investors make money by keeping it simple?

Investing Show: Can investors make money by keeping it simple?