Officially .. Coca is in the Turkish League through the Konyaspor gate and wears the number 9 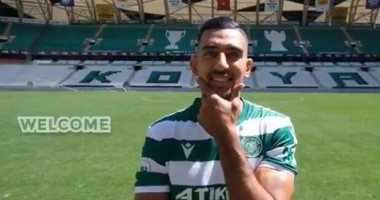 The Turkish club Konyaspor announced today, Wednesday, that it has officially signed the Egyptian international Ahmed Hassan Koca, the striker of the Pharaohs, from Olympiakos of Greece, on the last day of the summer transfer period in Turkey, and he will wear the number 9 player with his new team.

Konyaspor managed to sign the Egyptian international before the end of the summer Mercato, which ends today, Wednesday, September 8, after he became the third striker in Olympiacos.

The Turkish club Konyaspor submitted an official offer during the past hours, to sign the Egyptian international Ahmed Hassan Koca, the striker of the Greek club Olympiacos, before the end of the summer transfer market..

Olympiacos coach Pedro Martinez intends to rely this season on both the newcomer from the Chinese League and the Tianjin Teda team, Tekinho, and then the team’s top scorer in recent years, Youssef Al-Arabi, and thus Coca’s opportunity is difficult to participate in the matches..

Koca went on loan to the Turkish team for one season It will contain The contract has the eligibility clause to buy at the end of the loan period in June 2022 if Konya wishes to include Coca.

According to the Greek Nova Sports channel, Konya made the offer during the past hours, and asked Olympiacos to specify its demands to dispense with Coca, and therefore the channel explained in its report, that the next few hours will witness new developments in the deal..

For his part, Koca published a video on his account on the social networking site “Twitter”, while he was on the plane and did not comment on it.

Oxford scientists have found a new vaccine for the Nipah virus, which is spreading in India