Older drinkers who do not have smartphones could be discriminated against by pubs and restaurants – because they cannot order through an app.

Many venues are insisting customers place food and drink purchases through their devices to cut down contact with staff.

But charity Age UK said the measure rules out half of those aged 65 to 74 and 70% of the over-75s because they do not use a smartphone.

Widower David Walters, 78, found himself at the mercy of the rules when he tried to go to his local The Angel of Corbridge pub in Northumberland.

He said: ‘They could give me a seat, but could only take my order by app.

‘Apparently this is a government regulation for Test and Trace.

‘So an elderly person like me, who only has a 20-year-old Nokia with no apps, cannot have a drink. 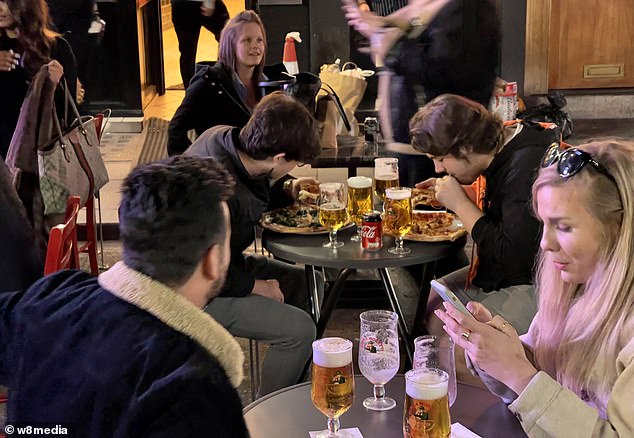 People out for a drink in Soho, London, on Tuesday night now that pubs have reopened 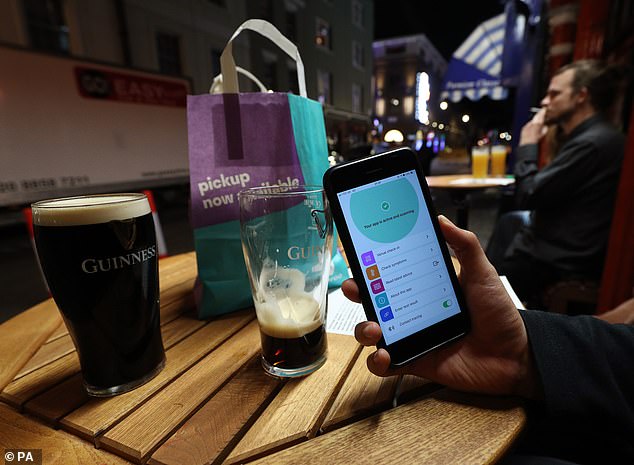 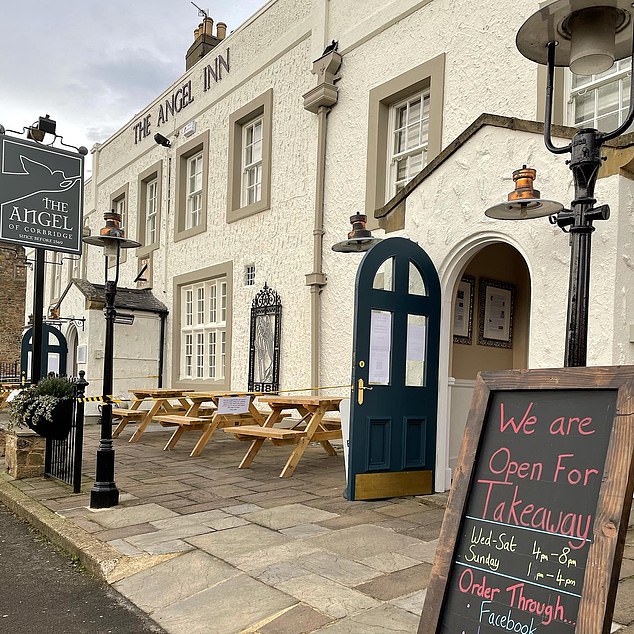 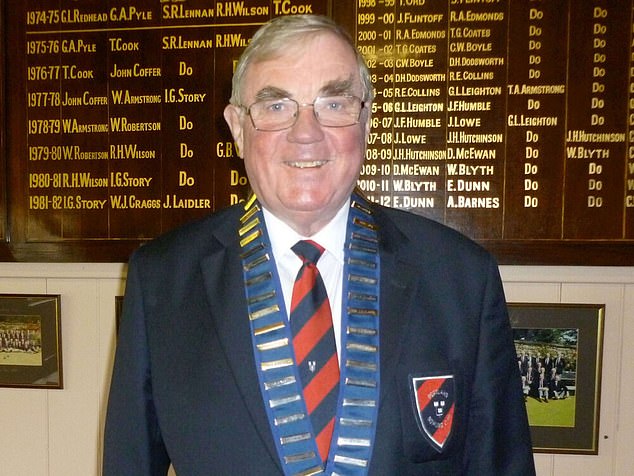 Corbridge resident David Walters tried to get a pint at The Angel, but his phone was too old

He added to the Telegraph: ‘I just thought it was terrible. Older people like me don’t have this computer knowledge because we weren’t brought up with computers.’

Official Government guidance states venues should ensure there is a way for an individual to provide their contact details ‘if they do not own a smartphone or have access to digital routes’, and suggests paper records.

It says: ‘You must make sure that there is a method of checking in that does not rely on the customer using a smartphone or other technology in order not to digitally exclude people without access to these technologies.’

Pub owner Kevin Laing said the app was a temporary measure until indoor hospitality is set to return on May 17, and that he and his staff were ‘just doing the best we could at the time, and following the advice and guidelines to try and keep guests and staff safe’.

He said: ‘I’m not discriminating against elderly people or young people, it just seems that if people haven’t got a smartphone then it doesn’t suit them.’

In a report published last month, Age UK found that while just under a quarter of over-75s in England have increased their internet usage since the pandemic hit, most older online users say their use has remained unchanged, with nearly one in 10 using it less. 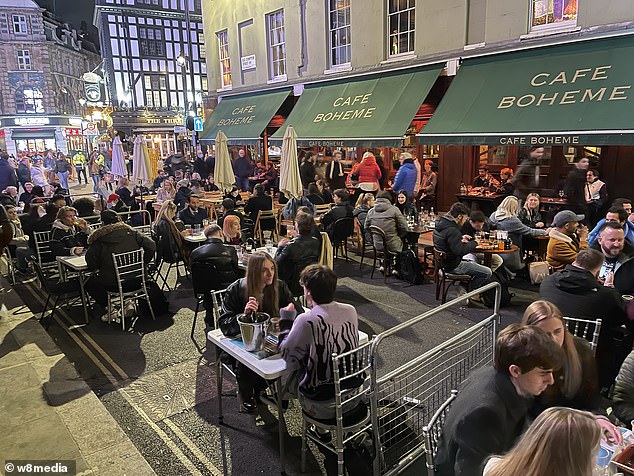 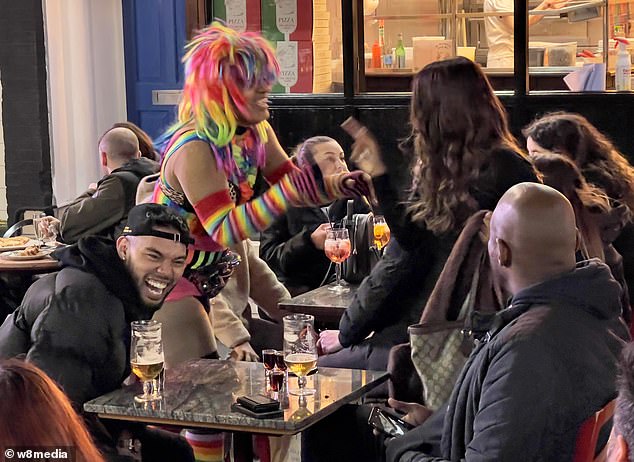 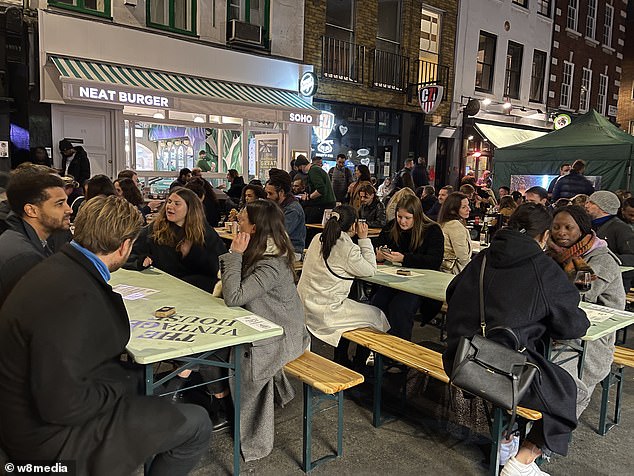 What restrictions have now been eased from the strict lockdown?

Until May 17 at the earliest: Gatherings of up to 30 people outdoors, with the rule of six and two-household rule indoors; pubs and restaurants will reopen indoors; and controlled indoor events of up to 1,000 people or 50 per cent of a venue’s capacity, whichever is lower, will be permitted.

Up to 30 people will be allowed to attend weddings, receptions, funerals, and commemorative events, including wakes. Indoor gatherings like exercise classes will be given the go ahead.

Until June 21 at the earliest: All legal limits on social contact will be lifted and nightclubs reopened.

Caroline Abrahams, charity director at Age UK, said the requirement for people to use apps in pubs and restaurants ‘risks widening the digital divide and reducing the opportunities for some older people to enjoy socialising once again’.

She added: ‘We fully understand the need for venues to pay attention to infection control but it would be helpful to their bottom lines, as well as to older people, if they ensure that smartphone use is not a precondition for buying a drink or a meal.’

It Britons were claimed to have already made 14 million pub bookings with venues booked up until May.

A poll by the Caterer.com showed six million Brits have planned or booked this month with another eight million over the following three months.

The Sun said Cocktail bar One Eight Six in Manchester was fully booked for ten consecutive weekends from May.

While in Birmingham, Craft bar and restaurant, reported most outdoor tables were taken until July.

The Prime Minister warned throwing caution to the wind risked derailing the pandemic roadmap and stressed that lockdown – not vaccinations – were driving down infections, hospitalisations and deaths.

He sounded the gentle note of caution as millions of people in England yesterday woke up to their first pub hangover of the year after beer gardens were given the green light to reopen after four months shut.

All stages of the government’s roadmap – May 17 and June 21 are next – fall on a Monday, meaning plenty were nursing sore heads at their desks today.

Sporting his own trimmed-back trademark blonde locks in Downing Street, the PM warned: ‘People have been able to go to the pub, to go shopping, get a haircut and so on, and that’s great.