NHS workers and their relatives account for one in six Covid-19 patients of working age who are hospitalised, a study has found.

Scientists at the University of Glasgow analysed data for hospital admissions among adults aged 18 to 65 in Scotland against the general p.

Healthcare staff in ‘patient-facing’ roles, such as working in A&E, were three times as likely to be admitted with the disease as the general population.

Their family members were also twice as likely to be hospitalised with the disease, results of the research showed.

Healthcare workers are more susceptible to picking up the infection because they work in close proximity to Covid-19 patients.

They then may unknowingly take the coronavirus to their home, where there are potentially older and more vulnerable people, the researchers warned.

Their work highlights the importance of adequate personal protective equipment (PPE), such as medical masks, gloves, and goggles, which were in huge shortages in the first wave of the pandemic. 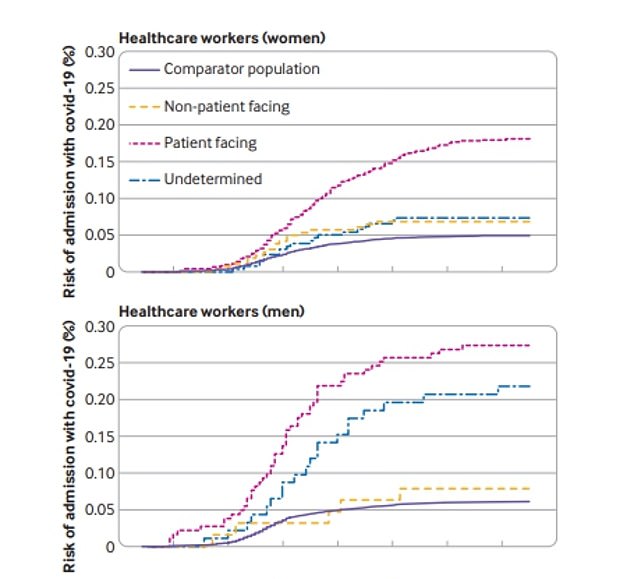 The risk of admission to hospital with Covid-19 (side axis) in healthcare workers over the course of the first wave of the pandemic (dates on bottom axis) compared wit the general population. Those in ‘patient-facing’ roles, such as paramedics, were most at risk 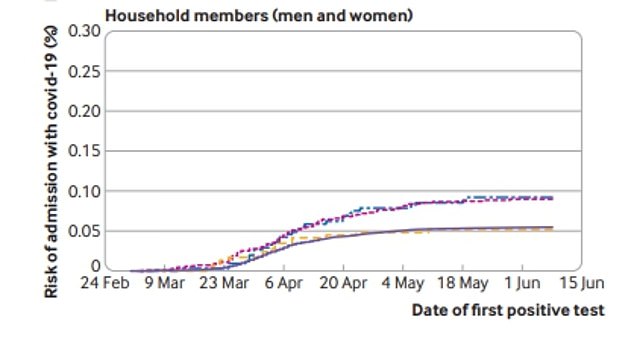 The risk of admission to hospital with Covid-19 (side axis) in household members over the course of the first wave of the pandemic (dates on bottom axis). The pink dotted line represents people who live with NHS staff in ‘patient-facing’ jobs

Death rates for Covid-19 patients admitted to hospital halved during the first wave of the pandemic, according to research.

Survival rates were lowest at the end of March, when 26 per cent of patients in high dependency units and 41 per cent in intensive care succumbed to the virus.

But by the end of June the risk of severely-ill coronavirus patients dying had dropped to just seven per cent and 21 per cent, respectively.

Scientists say the fall is likely due to improved treatments, including doctors having more experience handling Covid-19 patients and medical breakthroughs such as the discovery that dexamethasone can save the lives of the critically-ill.

They added that fewer admissions to critical care units due to improved treatments on hospital wards may also have triggered a fall in the death rate.

The findings, published in the journal Critical Care Medicine, are based on more than 21,000 hospital admissions in 108 critical care units in England that were submitted to the Covid-19 Hospitalisation in England Surveillance System.

The scientists said in the study: ‘There has been a substantial improvement in survival amongst people admitted to critical care with coronavirus disease 2019 in England.

Dr John Dennis, from the University of Exeter Medical School who led the research, said: ‘Importantly, we controlled for factors including age, sex, ethnicity and other health conditions such as diabetes.

‘This suggests the improvement in death rates in more recent months is not simply due to younger, or previously healthier, people being admitted to critical care.’

The data was matched with separate data that has tracked hospital admissions from Covid-19 in the general population.

Healthcare workers accounted for 11.2 per cent of hospital admissions and their household members made up for 5.6 per cent – 17 per cent overall.

This is despite the fact they represent only 11 per cent of the working age population.

On closer inspection, staff who worked in jobs that didn’t involve directly coming into contact with patients, such as lab technicians, were not found to be at any more risk than the general population.

But those in patient-facing roles, such as nurses, surgeons, and paramedics, were three times more likely to be admitted to hospital for Covid-19.

Members of their households, which may include children, parents or housemates, were nearly twice as likely to be admitted to hospital for Covid-19 than other working age adults.

The study, in the British Medical Journal, concluded: ‘Healthcare workers and their households contributed a sixth of hospital admissions with Covid-19 among working age adults.

‘Healthcare workers in patient-facing roles — especially those in ‘front door’ roles — are, along with their households, at higher risk of admission with Covid-19.

‘As the northern hemisphere enters winter and nonpharmacological measures in populations are relaxed, governments, healthcare managers, and occupational health specialists need to consider how best to protect healthcare workers in the event of a resurgent pandemic.

‘This is necessary to protect the healthcare workers and their families, in addition to reducing onward transmission into the community.’

Among the healthcare workers in the study who were admitted to hospital, one in eight went into critical care. Six of them (2.5 per cent) died.

The paper said: ‘Within healthcare workers who were admitted to hospital, a non-trivial proportion resulted in admission to critical care or death.’

In admitted household members, one in five were admitted to critical care and 18 (13 per cent) died.

These findings should inform decisions about the organisation of health services, the use of PPE and staff organisation, the team conclude.

David McAllister, a public health doctor based at the University of Glasgow, said: ‘Healthcare workers continue to play a vital role in our response to the pandemic, every day.

‘It is vital that we understand the risks associated with Covid-19 for them and their families, and not just for their own health, but also so that we can protect and plan for the workforce in the future.

‘This work helps us to do that. It highlights that whilst the risk for many healthcare staff is similar to that of the general population, there is higher risk to some staff.

‘Knowing this can help us to take action to protect those staff at greatest risk as we work through this pandemic. With other organisations across Scotland, we are working to make sure that we do that.’ 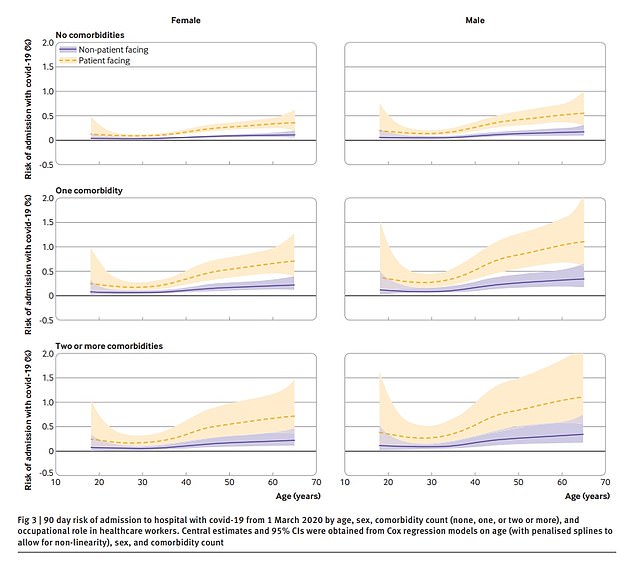 The risk of hospital admission in patient-facing (yellow) and non-patient facing (purple) in NHS workers depending on their age, sex and whether they have a health condition