One woman, 23 lovers, no regrets: Author NELL DUNN reveals all about her muse and best friend Josie

She may be an almost forgotten name now but, in the Sixties, Nell Dunn was one of the most controversial and talked-about writers in Britain.

Her books Up The Junction and Poor Cow were an unflinching look at the lives of working-class women, presented without any moralising or judgment, and caused a sensation.

The women Dunn writes about talk endlessly about men, sex, motherhood, families, work and friendship. Husbands drift in and out of prison and the women sometimes dabble in prostitution to make ends meet. Their lives may be grim but they are remarkably philosophical about it all. 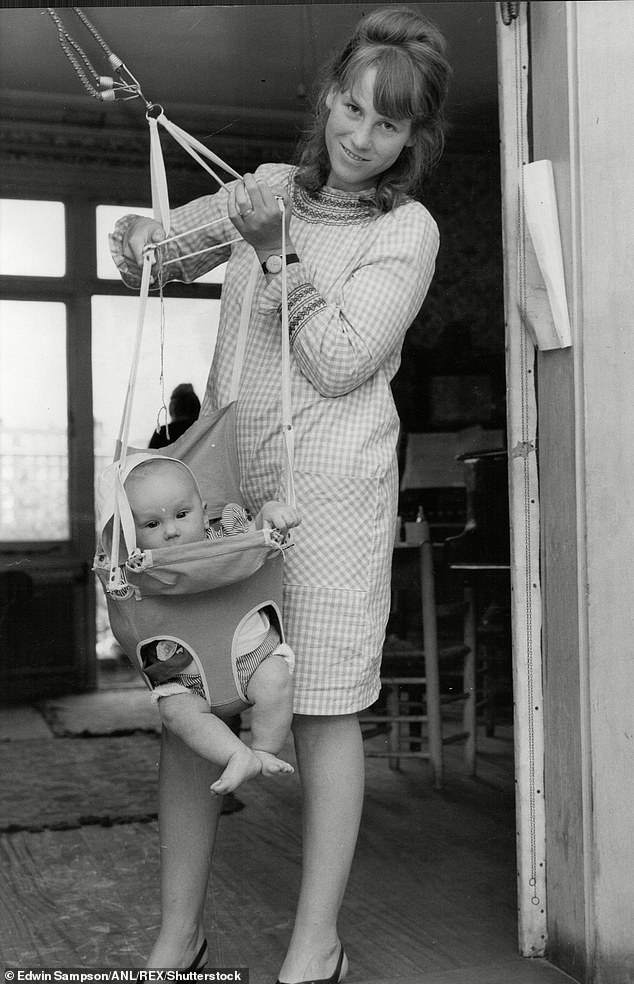 Nell Dunn, one of the most controversial authors of the 1960s has revealed more about the life of her muse – her best friend Josie. Pictured, Nell Dunn and her son Rueben Sandford in 1964 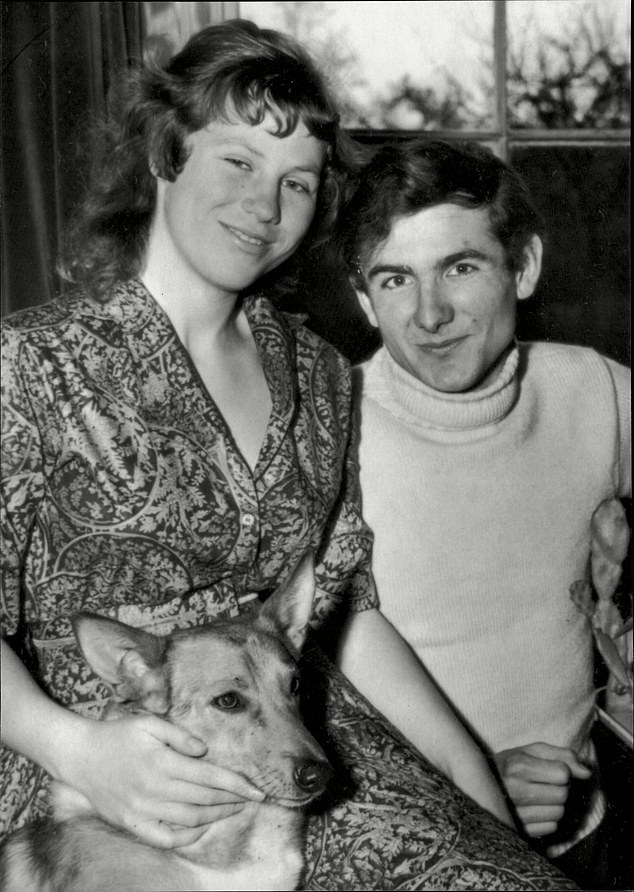 Living in Chelsea, Nell’s grandfather was an earl, but she moved to Battersea in 1959 with her TV screenwriter husband Jeremy Sandford. Pictured, Nell and Jeremy

Nell Dunn, the granddaughter of an earl, moved from Chelsea to Battersea in 1959 with her old Etonian husband Jeremy Sandford, who was to write the classic play Cathy Come Home. Nowadays, Battersea is popular with wealthy professionals — Sting owns a flat there — but when they moved in it was solidly working class. ‘I had the only bath in the street, so there was always a queue for it,’ Nell writes.

In 1960, on the night of Princess Margaret’s wedding when everyone was drunk, she met Josie, who would become her best friend and her muse.

Josie had got married at 16 and had a son at 17. Her husband was often in prison and being married didn’t stop her having lovers: she once listed 23 of them for Nell, adding, ‘I loved them all — while I was with them.’

Through Josie, Nell found her writer’s voice, not just because of Josie’s use of language but also ‘the freedom and daring of her life’. Poor Cow was made into a film by Ken Loach and, last year, the BBC chose it as one of the 100 most inspiring novels in the English language. Novelist Margaret Drabble has said it was one of the first books ‘to treat women’s sexuality as though it were entirely natural’. 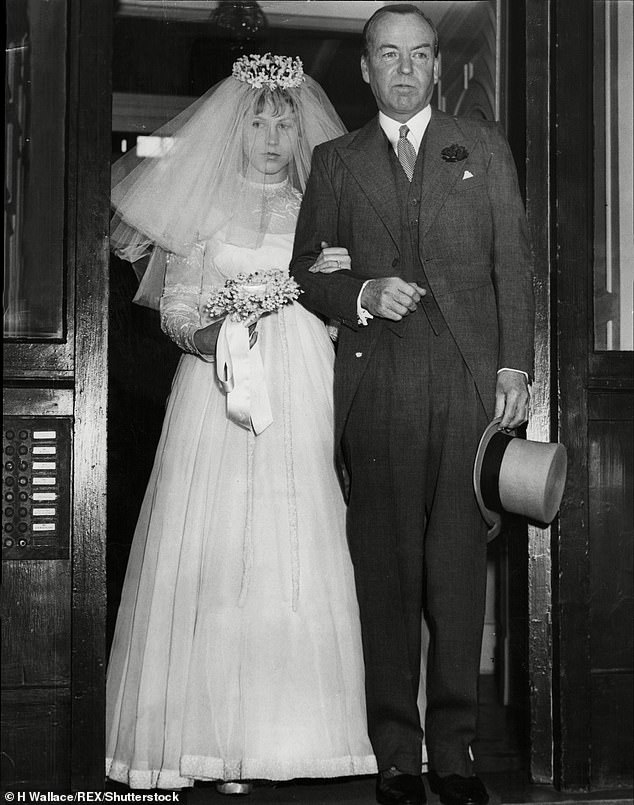 After they got married, the young couple moved to Battersea, which was not the highly sought after area it is now – with their house being the only one on the street with a bath. Pictured: Nell on her wedding day with her father 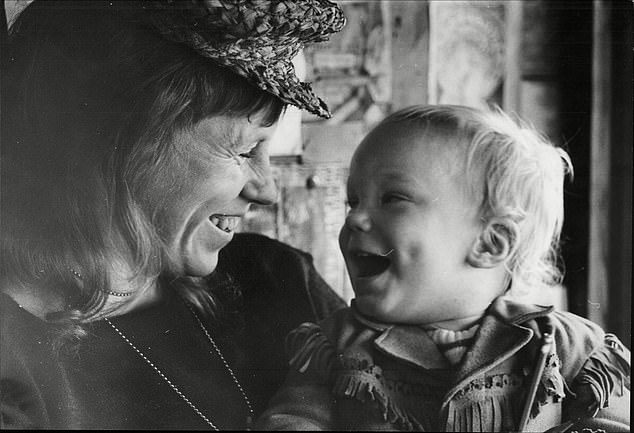 In her latest book, Nell describes the life of her best friend Josie, who she says helped her find her voice , including her numerous lovers while her husband was in prison and having a baby at 17. Pictured: Nell and son Rueben in 1965

In her early 30s, Josie met a South African called Bill. Nell disliked him on sight but Josie fell madly in love and took off with him to Australia on Christmas Day, ‘leaving the turkey in the oven to burn’, and abandoning her 15-year-old son. 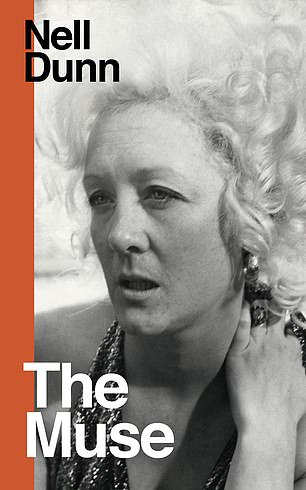 Despite this, the women exchanged frequent affectionate letters. Josie writes in a near stream of consciousness, with appalling spelling, about the ups and downs of her life. ‘I got a job in a club but Bill didn’t like it. (Jelosee). So after a week I had to leave,’ she writes from Australia. Soon Bill falls foul of the law, ‘Smuggling uncut diamonds I think … I am trying hard not to get to deprest but some times failing.’

Bill turns violent and Josie flees home, in time for the opening of Dunn’s latest play Steaming, which is a great success.

She now lives on the south coast ‘with a handsome man’, and the two women still talk most days. Why has their friendship been so close and so enduring? Josie reminds Nell of her mother, who had the same ‘freedom and generosity’. As for Josie, ‘I think she loved me as an audience. She liked making me laugh. She loved me loving her.’

This slim volume is entertaining but frustrating because there are so many gaps. You long to know more about Nell’s life — her husband is never mentioned; did she ever move back to the posh side of town? What became of Josie’s abandoned son? While Poor Cow is a masterpiece, The Muse is no more than a pleasant addendum.

Patriots QB Cam Newton on struggles: 'I just haven't been good' this year

Patriots QB Cam Newton on struggles: 'I just haven't been good' this year