Just one in five Britons with tell-tale symptoms of coronavirus are choosing to self-isolate, research revealed today.

King’s College London scientists, working alongside academics from Public Health England, quizzed 30,000 people living in the UK about how they have acted during the Covid-19 pandemic.

Results showed just 18.2 per cent of respondents admitted to actually quarantining themselves for 14 days, when they had a cough, fever or lost their sense of taste or smell.

And the figures were even lower for Britons who had been tracked down and asked to self-isolate by NHS Test and Trace. Just 10.9 per cent of the volunteers confessed to adhering to the guidance.

Experts behind the study claimed younger people, men, key workers and those from deprived backgrounds were most likely to break the rules.

Their paper, which was first published last week, suggested ministers should up the financial payments given to those asked to quarantine at home.

Matt Hancock has since promised £500 as an ‘isolation support income’ for people on benefits who are urged to self-isolate, so they don’t ‘worry about their finances while they’re doing the right thing’. Self-isolation can be costly because statutory sick pay does not always give people enough to live on. 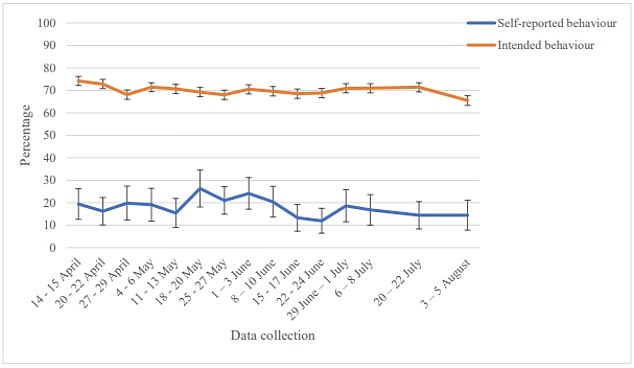 Results showed intention to self isolate was high at 70 per cent. But of those who actually reported tell-tale signs of Covid-19 in the last seven days, only 18.2 per cent stayed at home for the duration of their symptoms 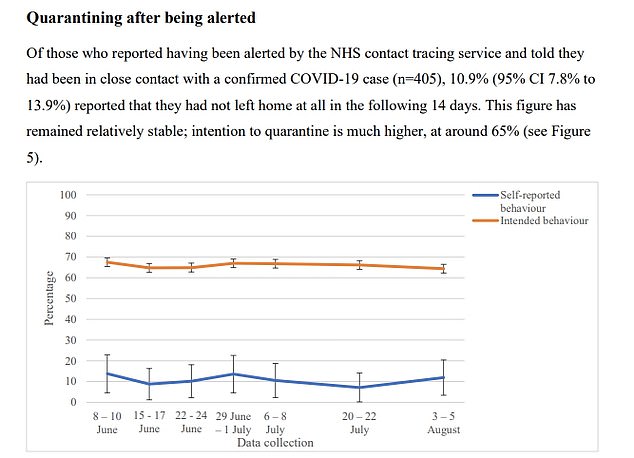 Similar results were seen for those who had been asked to self isolate by NHS workers. Some 65 per cent said they would quarantine if contacted by Test and Trace but only 10.9 per cent actually did 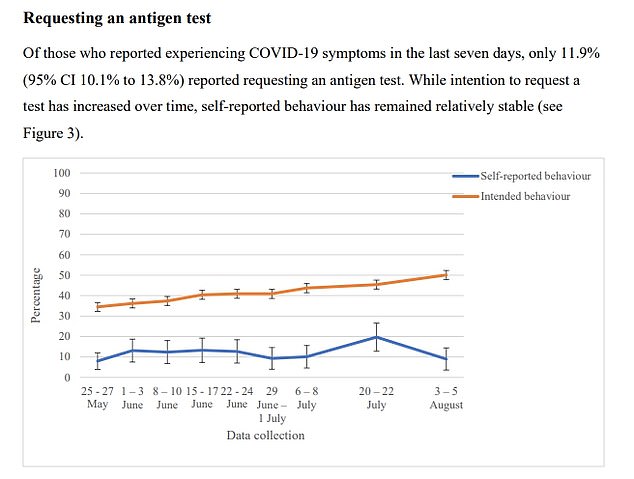 Only 11.9 per cent of those with symptoms said they had requested an antigen test. People commonly said they didn’t get checked because their symptoms were only mild or because they hadn’t realised they were caused by the coronavirus

Government guidance says if you have Covid-19, you must self isolate for at least ten days. If have been in close contact with someone with the disease, you must remain at home for 14 days from the time of their contact.

The government’s advice page states: ‘It can take up to 14 days for you to develop coronavirus symptoms after you catch the virus. In this time you can unknowingly pass it on to others, even if you don’t have symptoms.’

Failure to abide the rules in England could face fines of up to £10,000, the Government warned last week amid deepening concern at the sharp upsurge in coronavirus infections.

One in 16 suspected coronavirus patients are wrongly told they are negative, according to an assessment of the tests used by the Government in laboratories across the UK.

The Times reported court action brought by a British firm whose technology was rejected in favour of a Belgian companies – shown to be less effective at spotting the disease.

The two rival businesses competed for the £1.5million, year-long contract to handle laboratory tests in April.

The Belgian company, Ugentec, which won the contract to provide testing for the Lighthouse megalabs, gave three ‘false negatives’, the court papers said.

The Belgians classed 44 samples as ‘negative’ which Diagnostics AI labelled as ‘negative/inconclusive’, which may have led to a second test.

The total number of samples which had a result of either positive or negative/inconclusive in the trial run is believed to have been more than 700.

Ugentec missed 47 such cases, meaning that it falsely told almost one in 16 suspect coronavirus patients they were virus-free.

This meant they would have carried on their daily lives, potentially spreading the coronavirus on to dozens more people.

Diagnostics AI will claim in the High Court that the selection process was rigged in favour of Ugentec. They will suggest that the Lighthouse Labs were biased against the British contenders and treated them unfairly, it’s reported.

Fines will initially start at £1,000 rising to £10,000 for repeat offenders and for ‘the most egregious breaches’ including those who stop other people from self-isolating, such an employer who requires a staff member to come into work.

The new regulations will come into force in England on September 28, although ministers are in discussion with the devolved administrations for Scotland, Wales and Northern Ireland about extending them UK-wide.

Writing in the pre-print paper, which has yet to be published in a journal, the team said: ‘In the absence of a vaccine, governments around the world are relying on test, trace and isolate strategies to prevent the spread of Covid-19.’

But they warned the ability of the test, trace and isolate system to keep rates of the disease under control ‘relies on how well people adhere to it’.

When announcing a new self-isolation pay packet last week, Mr Hancock said: ‘Self-isolating if you have tested positive for Covid-19, or have come into contact with someone who has, remains vital to keeping on top of local outbreaks.’

It’s difficult to ascertain the proportion of infected people that need to self-isolate in order to stop the chain of transmission. Studies have previously modelled around 75 per cent of symptomatic cases would need to be isolated in a world where schools and workplaces are running as normal.

The researchers, which also involved experts from University College London, used data from 21 different surveys carried out since the pandemic began. All volunteers were over the age of 16 and were given the equivalent of 70p for taking part.

They were asked whether they had left home in the past week, despite having one of the three NHS-recognised symptoms of Covid-19.

They were also asked to imagine they developed a cough the next morning, and quizzed on whether they would leave their home.

Results showed intention to self isolate was high; 70 per cent of those who had not suffered Covid-19 symptoms said they would if they fell ill.

But of those who actually reported tell-tale signs of Covid-19 in the last seven days, only 18.2 per cent stayed at home for the duration of their symptoms.

Similar results were seen for those who had been asked to self isolate by NHS workers. Some 65 per cent said they would quarantine if contacted by Test and Trace but only 10.9 per cent actually did.

Only 11.9 per cent of those with symptoms said they had requested an antigen test. People commonly said they didn’t get checked because their symptoms were only mild or because they hadn’t realised they were caused by the coronavirus.

The most common reasons people broke their self isolation were to go to the shops for groceries or medicine (18.2 per cent), because symptoms got better (15.6 per cent), and to go out for a medical need other than for Covid-19 (14.9 per cent).

Having a dependent child in the house and working in a key sector were other factors that led people to break the rules.

The researchers warned knowledge of symptoms has been poor, which explained why some people in the study did not self isolate.

The symptoms – which range from a persistent cough, fever, headaches and fatigue – could be mistook for something else, and it took months before officials listed ‘loss of taste and smell’ as a key symptom that requires a test.

In this survey, less than half (48.9 per cent) identified cough, high temperature/fever and loss of sense of smell or taste as symptoms of Covid-19 between March and August.

There will also be a natural variation in how much people perceive Covid-19 as a true threat to others.

If a person has been told they have been in close contact with a Covid-19 case, and therefore need to self isolate, they may refuse because they think they have already had it, and are therefore immune, or don’t agree with a 14-day isolation period if no symptoms present.

There are also financial constraints that inhibit a person’s ability to stay off work for 14 days, while crowded living situations can make quarantining less appealing.

Now, eligible people who test positive for the virus will receive £130 for their 10-day period of self-isolation while other members of their household, who under current rules must isolate for 14 days, will get £182.

People on benefits in England will be eligible for a one off support payment of £500 if they face a loss of earnings as a result of being required to self-isolate.

What next for Neil Woodford and his investors? Investing Show