Number of weekly opioid-related deaths during coronavirus pandemic spiked by 135% with a 320% increase among under-35s, Canadian study finds

Opioid deaths in Canada jumped by 135 percent during the COVID-19 pandemic, with younger people being hit especially hard, a new study finds.

Researchers from the Ontario Drug Policy Research Network, St Michaels University and Drexel University gathered overdose death data from the province of Ontario and compared the first six months of the pandemic to overdose deaths in previous six month timespans.

Additionally, weekly deaths among those 35 and younger jumped from five to 21, an increase of 320 percent in the same time span.

The results show that Canada’s largest province also dealt with a surge in opioid deaths last year across North America.

The findings also reflect similar trends in the US, with with at least 42 states reporting an increase in fatalities, since the crisis began, according to the American Medical Association. 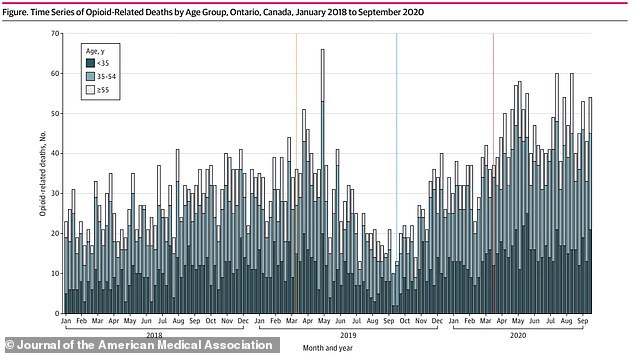 A new study finds that weekly opioid deaths surged by 135% the first six months of the COVID-19 pandemic in Ontario, Canada, with weekly deaths among those 35 and younger jumping 320%

Opioid deaths in the months prior to the pandemic’s start in March 2020 were relatively consistent, and then surged when COVID-19 begin to spread across the world, according to the study, published in JAMA Network Open on Wednesday.

Researchers found that 1,237 opioid overdose deaths were recorded in Ontario from March to September 2020.

Deaths increased across all age groups as well.

Individuals aged 35 to 54 also saw a rise of opioid deaths of over 50 percent.

The gender breakdown of deaths stayed relatively consistent over all three time spans, with men accounting for around 75 percent of opioid overdose deaths.

Researchers blame the sharp increase in opioid deaths during the first six months of the pandemic to a multitude of factors.

Deaths among individuals aged 15 to 34 increased to 426 from 249 and 274 in the previous two six month time spans, a 50% spike. Men also accounted for around 75% of opioid overdose deaths

Much of the treatment opioid addicts received before the pandemic was either stopped or moved online last March.

The pandemic also caused increased social isolation for many, which leads to more drug use.

The general emotional toll of living through the pandemic may have also caused some to start abusing drugs.

The researchers said there is an urgent need for low-barrier access to harm reduction services, especially for younger people, in order to prevent the surge in 2020 from happening once again.

Opioid deaths have surged across the United States as well, with a 34 percent increase in deaths since the pandemic began last March.

Public health officials worry that the pandemic may have undone progress on controlling the opioid epidemic over the years.

Opioid deaths have become common place in the United States, with an epidemic officially being declared in 2017.

Some preventative public health measures have been put into place over the years, such as first responders carrying Narcan, a drug which can prevent overdoses, and Good Samaritan laws that protect those who seek medical treatment from an overdose from legal charges.

Mozambique Palma attack: 'I had to pay a bribe to flee'