An Oscars red carpet unlike any before got underway on Sunday night, with no crowd, socially-distanced rules and fewer cameras amid the ongoing Covid pandemic.

The attendees both chose white suits for the awards show, with Tiara opting for a racy version while Diane opted for a sparkling element.

Here goes! An Oscars red carpet unlike any before got underway on Sunday night, with no crowd, socially-distanced rules and fewer cameras amid the ongoing Covid pandemic. Tiara Thomas and Diane Warren kicked off the 93rd annual Academy Awards, which took place at Union Station

The red carpet looked similar to how it did last year except there were far fewer people as there are social distancing restrictions in place due to the COVID-19 pandemic that has allowed only 170 people to attend this year rather than the normal 3,000.

This marks the first time Tinseltown’s finest have assembled in over a year, for a three-hour show that co-producer Steven Soderbergh has described as being ‘like a movie.’ 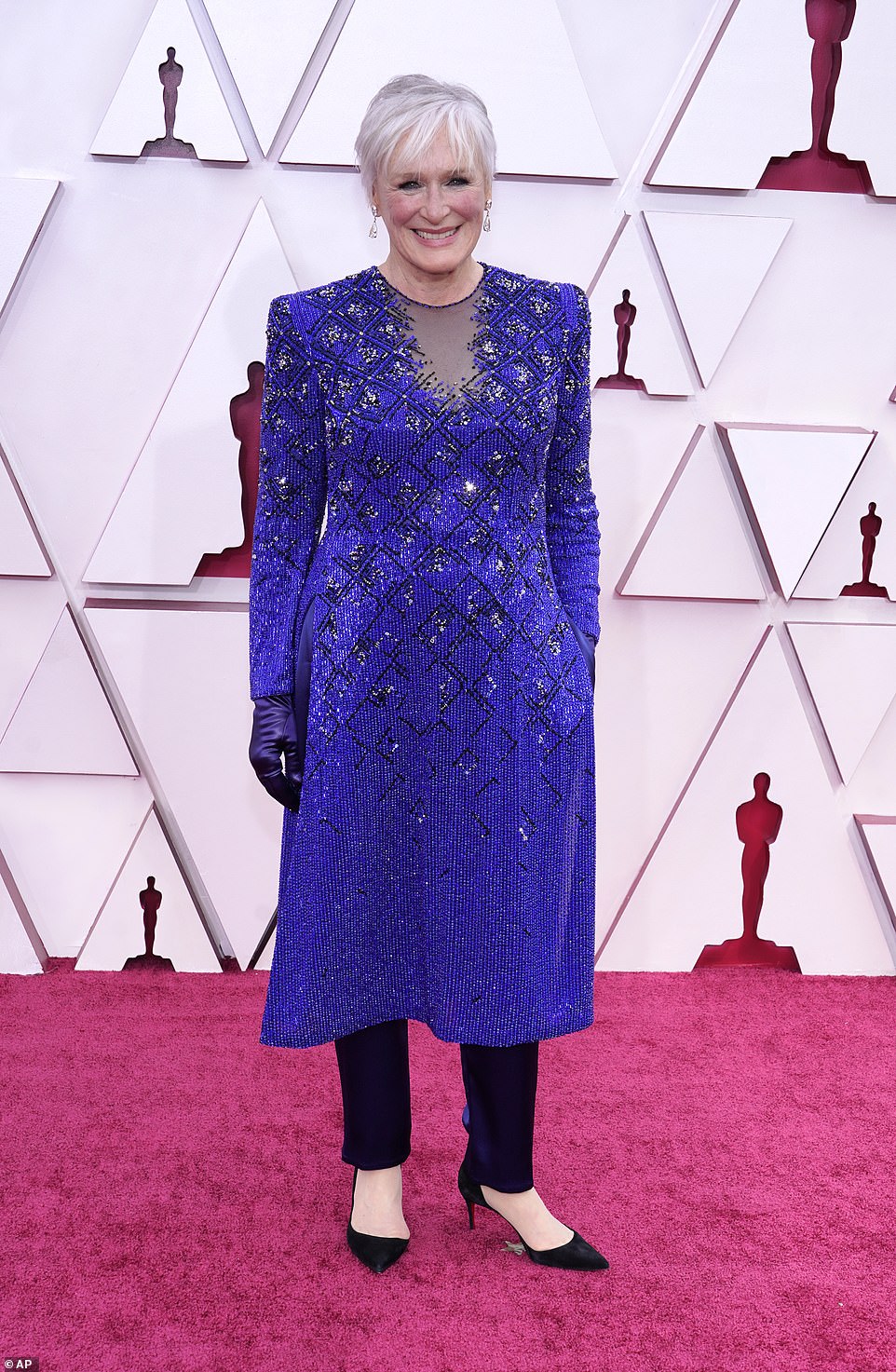 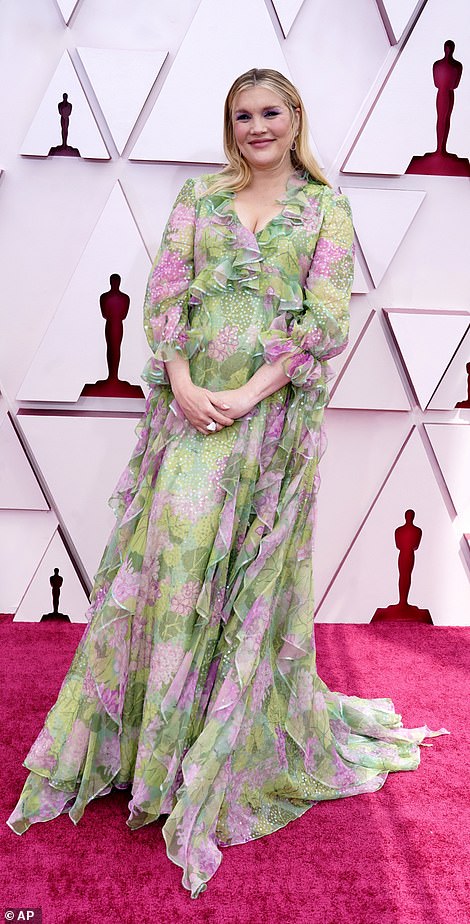 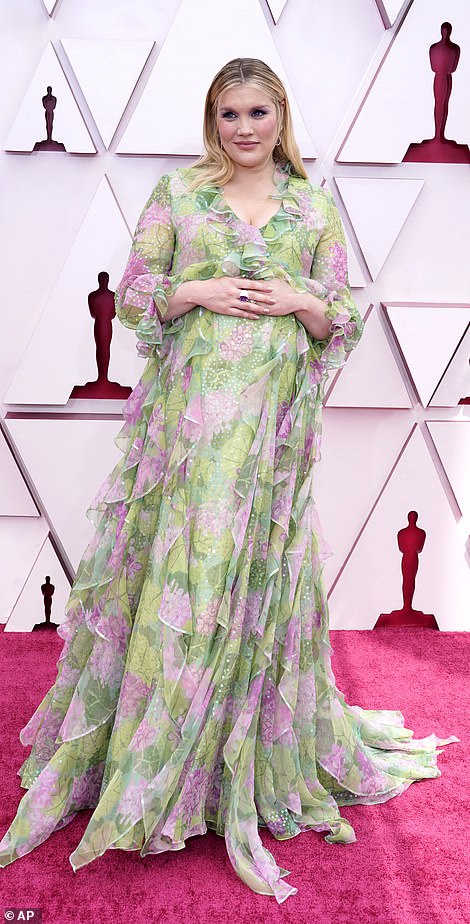 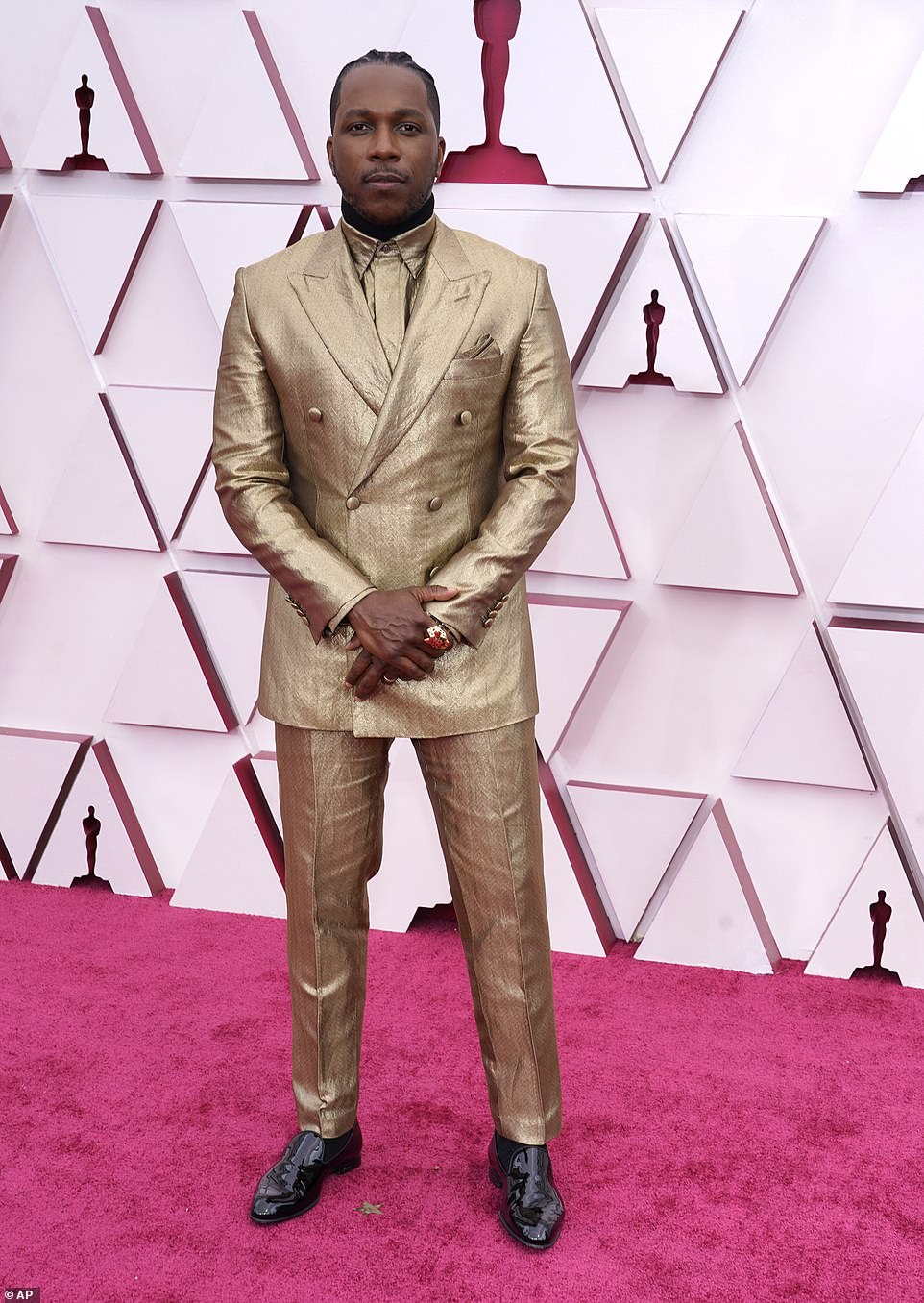 Dapper: Leslie Odom Jr. rocked a gold suit, complete with a matching button-up beneath; Leslie is nominated for two Oscars: Best Supporting Actor for his role in One Night in Miami and Best Original Song for film’s main song Speak Now 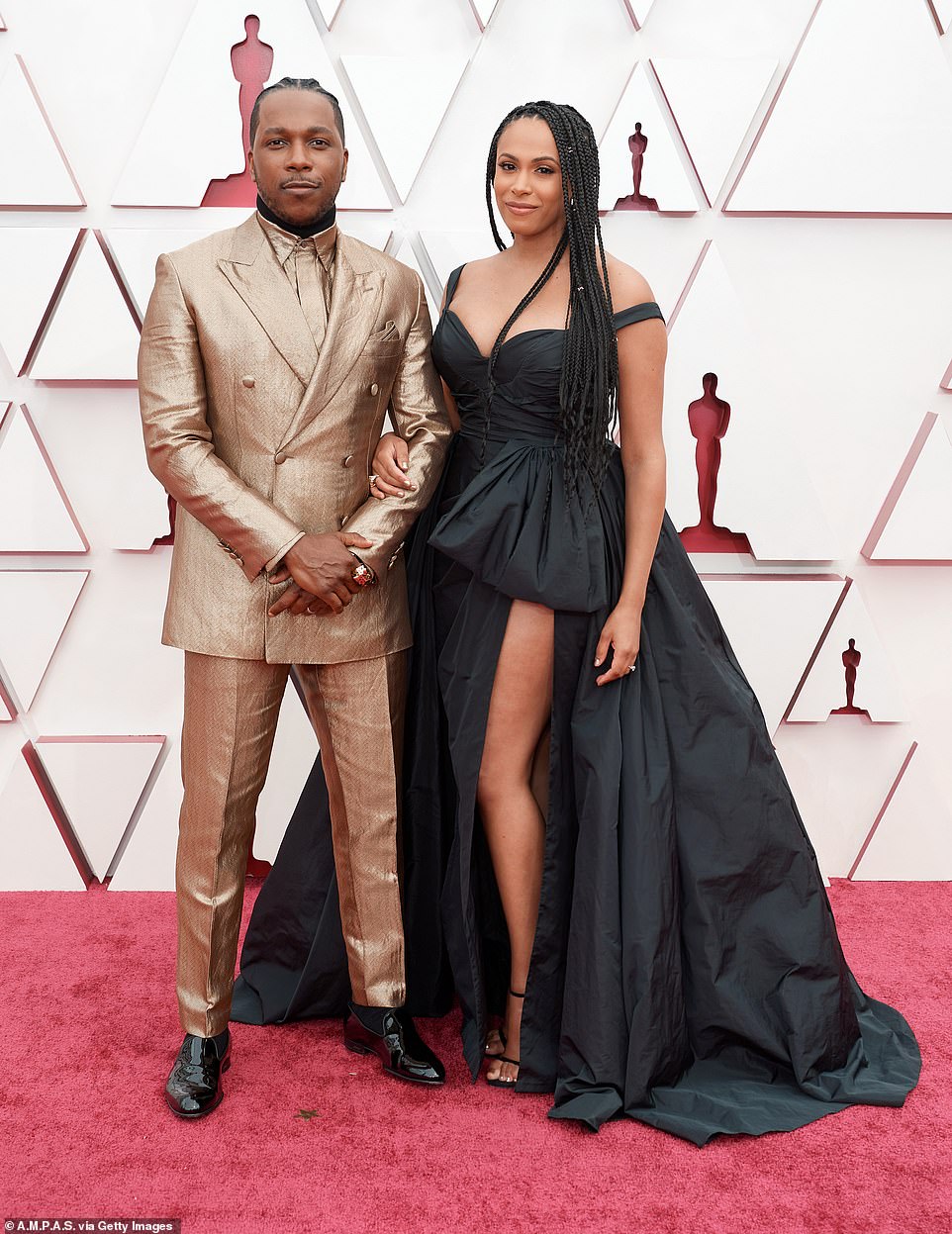 Good looking duo: Leslie arrived with his wife Nicolette Robinson; the couple welcomed their second child – a baby boy named Able Phineas or ‘Abe’ for short on March 25, 2021. They are parents to three-year-old Lucy 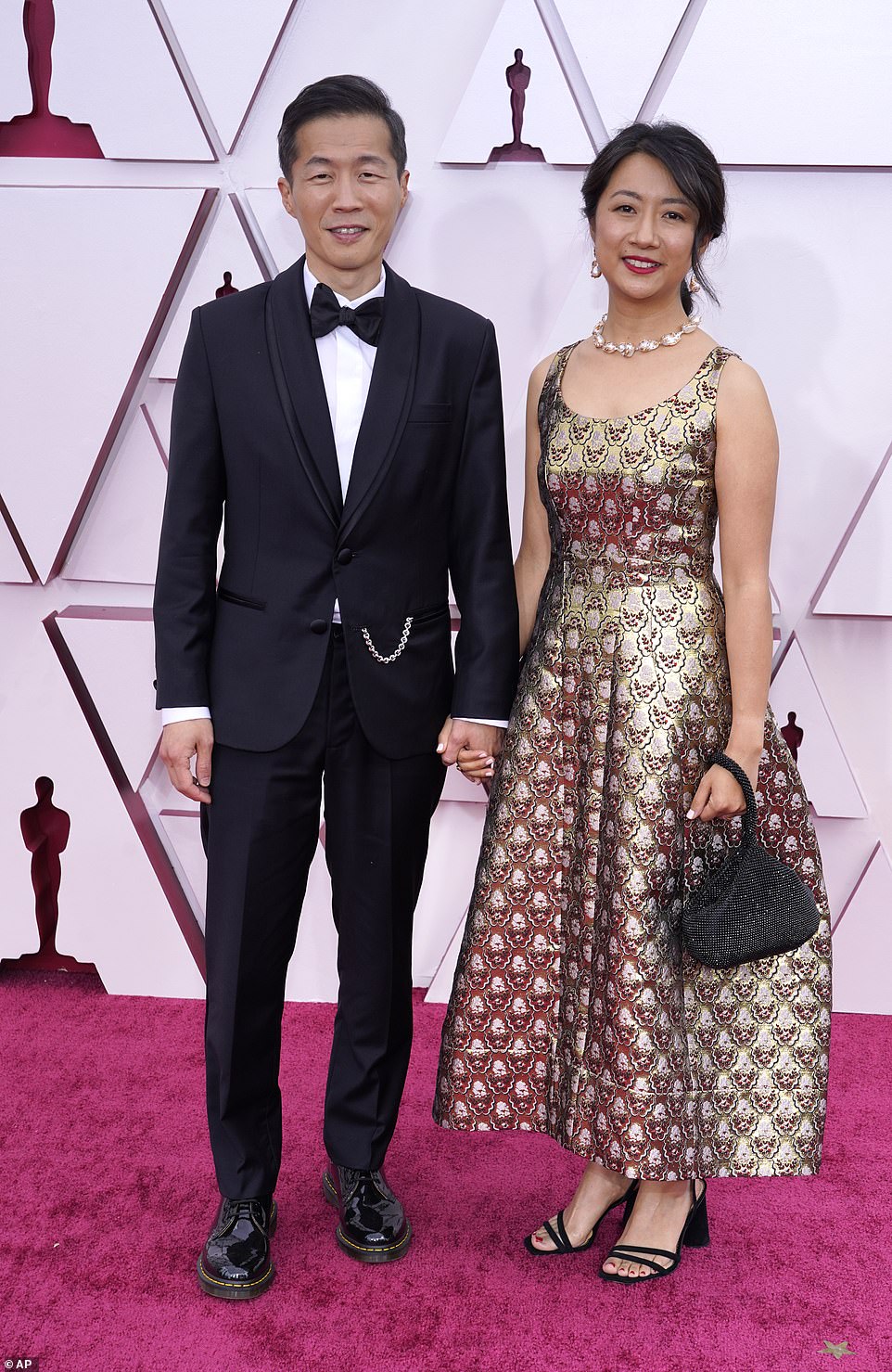 Pulling the musical interludes (though not the in memoriam segment) from the three-hour broadcast – and drastically cutting down the time it will take winners to reach the podium – will free up a lot of time in the ceremony. And producers, led by filmmaker Steven Soderbergh, are promising a reinvented telecast.

The Oscars will look more like a movie, Soderbergh has said. The show will be shot in 24 frames-per-second (as opposed to 30), appear more widescreen and the presenters – including Brad Pitt, Halle Berry, Reese Witherspoon, Harrison Ford, Rita Moreno and Zendaya – are considered “cast members.” The telecast’s first 90 seconds, Soderbergh has claimed, will “announce our intention immediately.” 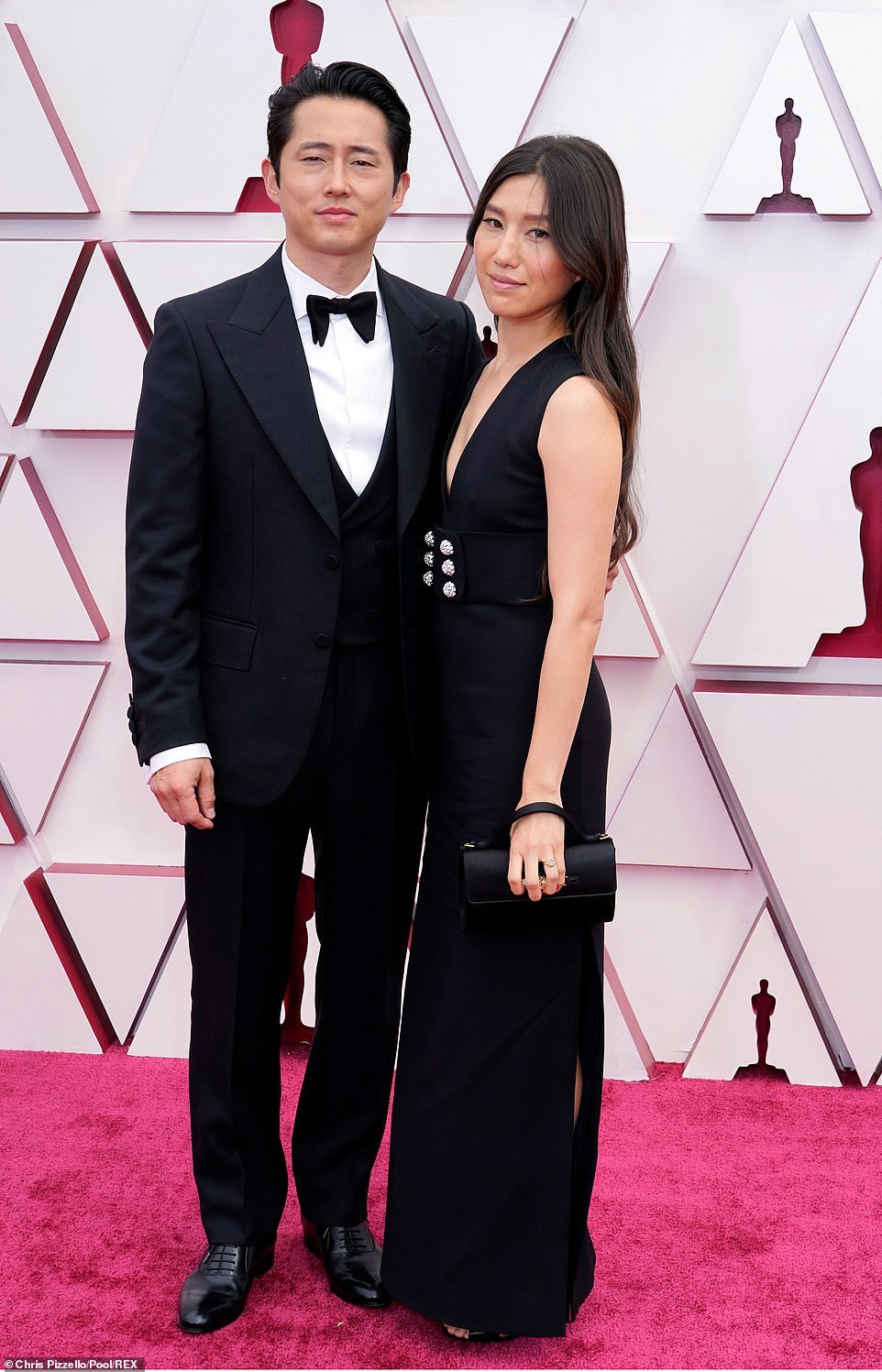 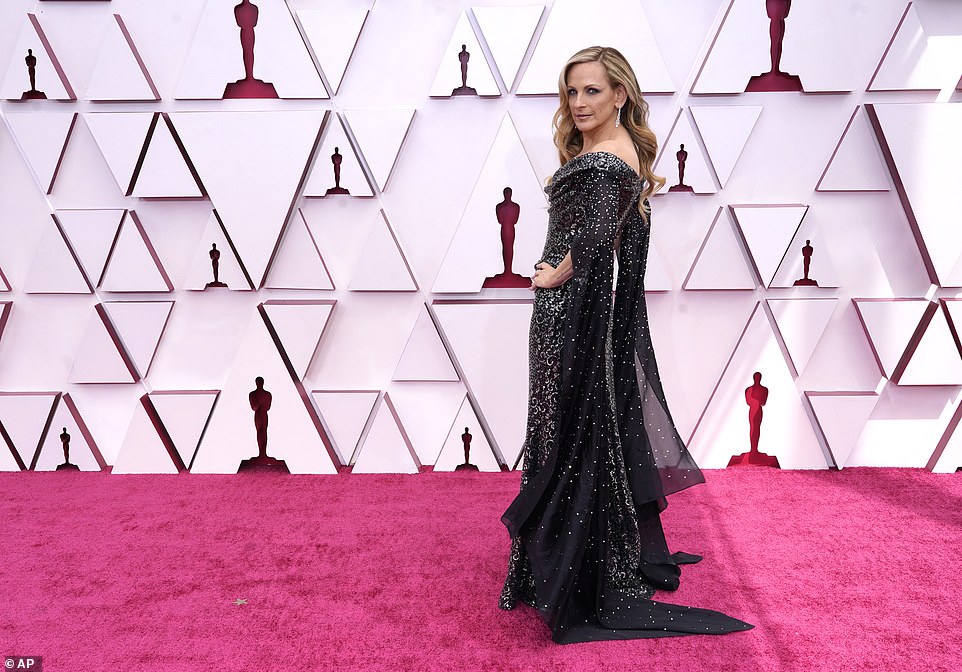 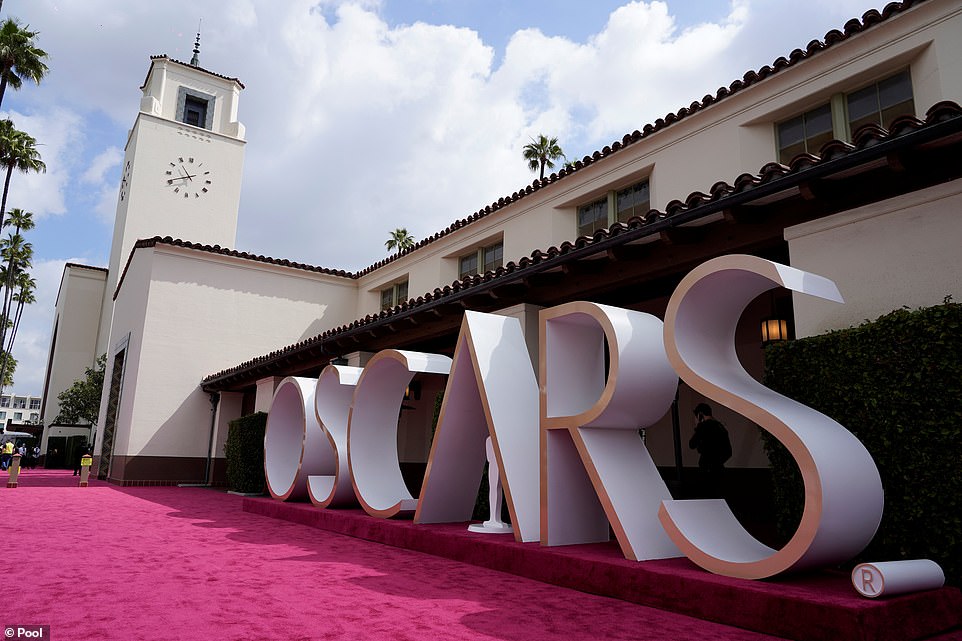 Low key: The Oscars red carpet was quiet this year, due to the COVID-19 pandemic. The red carpet seen just before the show kicked off 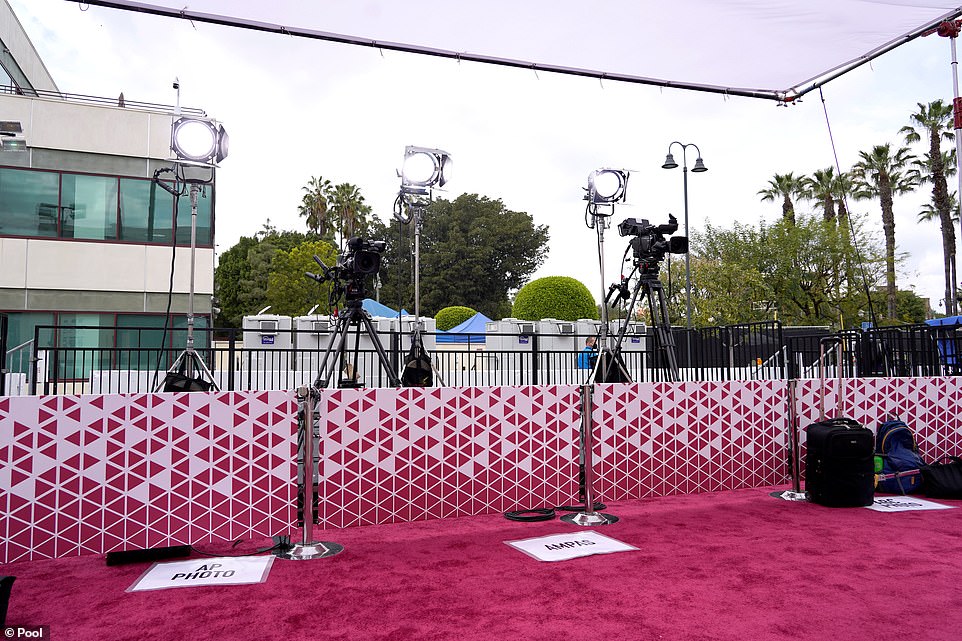 Another angle: The normally buzzing awards show – and the last one before the end of awards season – appeared deserted just before the show began 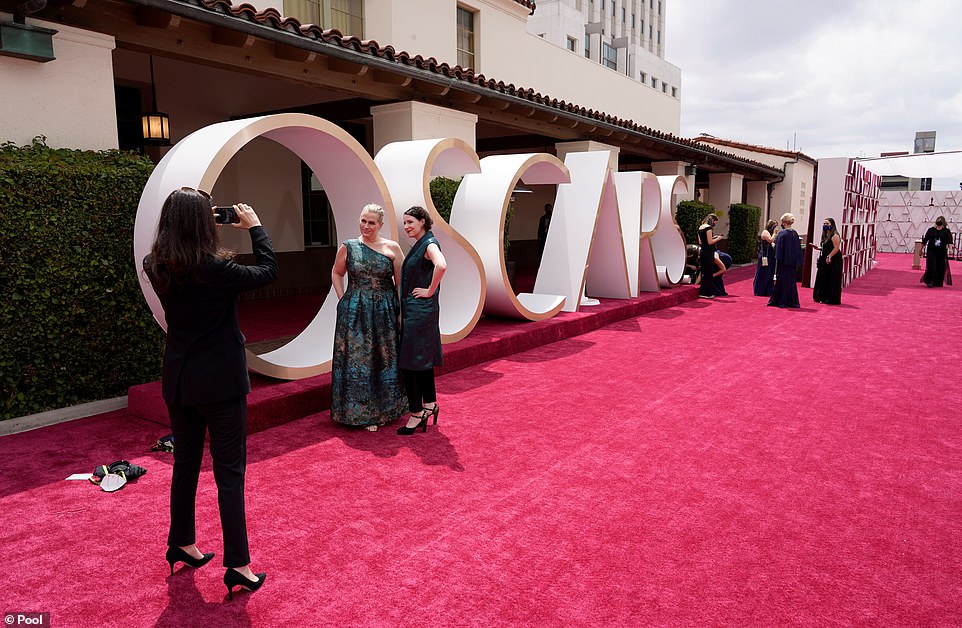 What a difference a year makes: The socially distance red carpet seen on Sunday afternoon

It is the first time that two female directors have ever been nominated in the Best Director category, with Chloé Zhao (Nomadland) and Emerald Fennell (Promising Young Woman) both receiving nods. Netflix dominated this year with 36 nominations, including the lead-nominee Mank, David Fincher’s black-and-white drama about Citizen Kane co-writer Herman J. Mankiewicz. The streamer is still pursuing its first best-picture win; this year, its best shot may be Aaron Sorkin’s The Trial of the Chicago 7.

But the night’s top prize, best picture, is widely expected to go to Chloé Zhao’s Nomadland, a contemplative character study about an itinerant woman (Frances McDormand) in the American West. Should it be victorious, it will be one of the lowest budget best-picture winners ever. Zhao’s film, populated by nonprofessional actors, was made for less than $5 million. (Her next film, Marvel’s Eternals, has a budget of at least $200 million.)

Zhao is also the frontrunner for best director, a category that has two female filmmakers nominated for the first time. Also nominated is Emerald Fennell for the scathing revenge drama “Promising Young Woman.” Zhao would be just the second woman to win best director in the academy’s 93 years (following Kathryn Bigelow for “The Hurt Locker”), and the first woman of color.

Only five women have ever been nominated in the category before.

History is also possible in the acting categories. If the winners from the Screen Actors Guild Awards hold – “Ma Rainey’s Black Bottom’s” Chadwick Boseman for best actor, Viola Davis for best actress; Yuh-Jung Youn (“Minari”) for best supporting actress; and Daniel Kaluuya (“Judas and the Black Messiah”) for best supporting actor – it would the first time nonwhite actors swept the acting categories – and a dramatic reversal from recent “OscarsSoWhite” years.

Several of those awards appear to be locks, particularly for the late Boseman, who would become the third actor to ever win a posthumous Academy Award following Peter Finch and Heath Ledger. Taylor Simone Ledward, Boseman´s widow, has often accepted previous honors on his behalf.

If there’s one less certain category, it’s best actress. Davis, who has won previously for her performance in “Fences,” is up against Carey Mulligan (Promising Young Woman) and two-time winner McDormand. Prognosticators call it a three-way toss up. 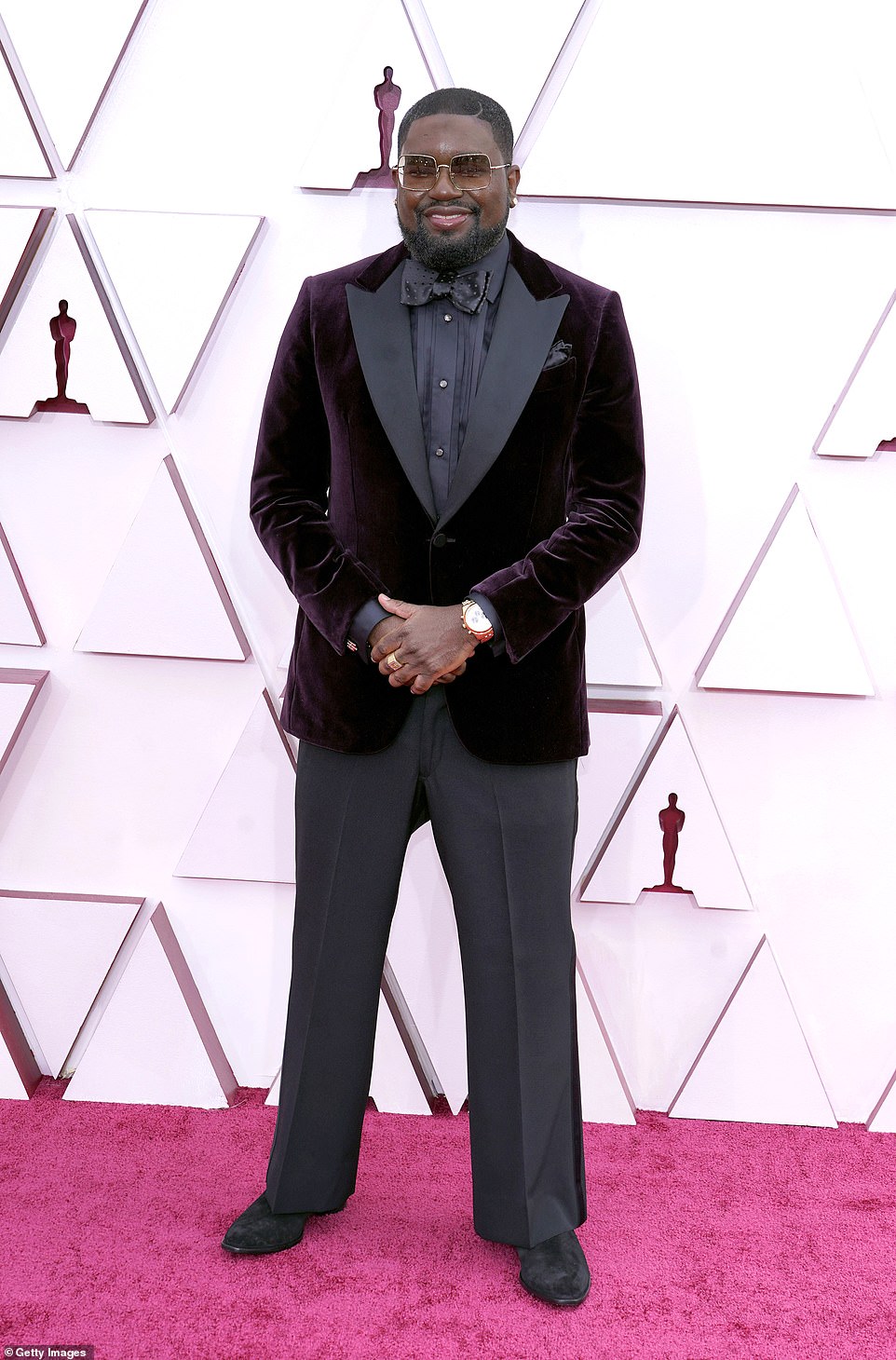 Suited and booted: Lil Rel Howery arrives at the Oscars  in a velvet black blazer with matching shirt and bow tie 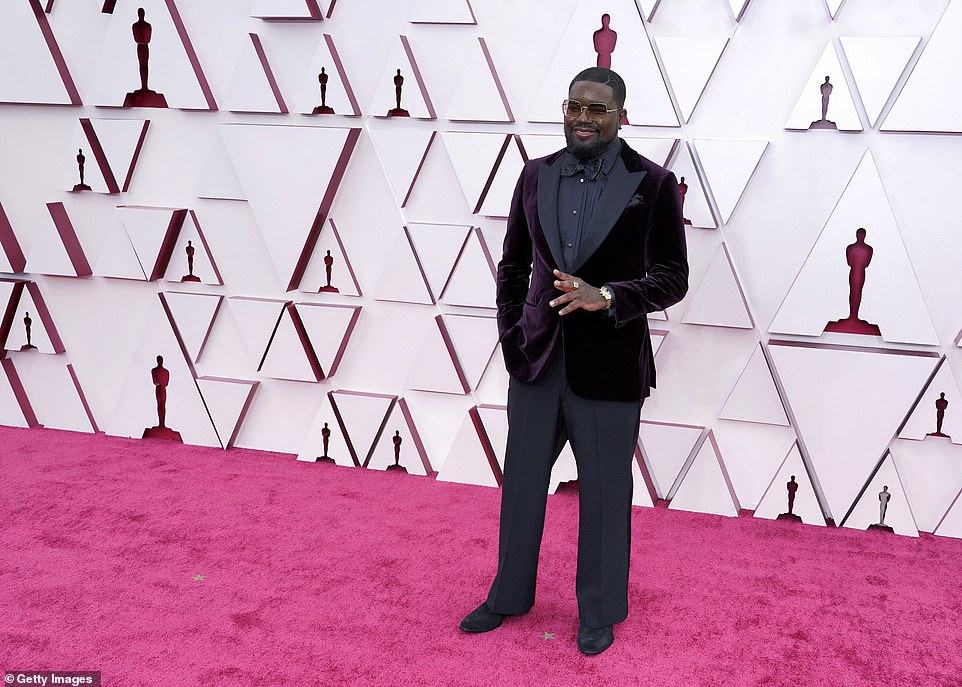 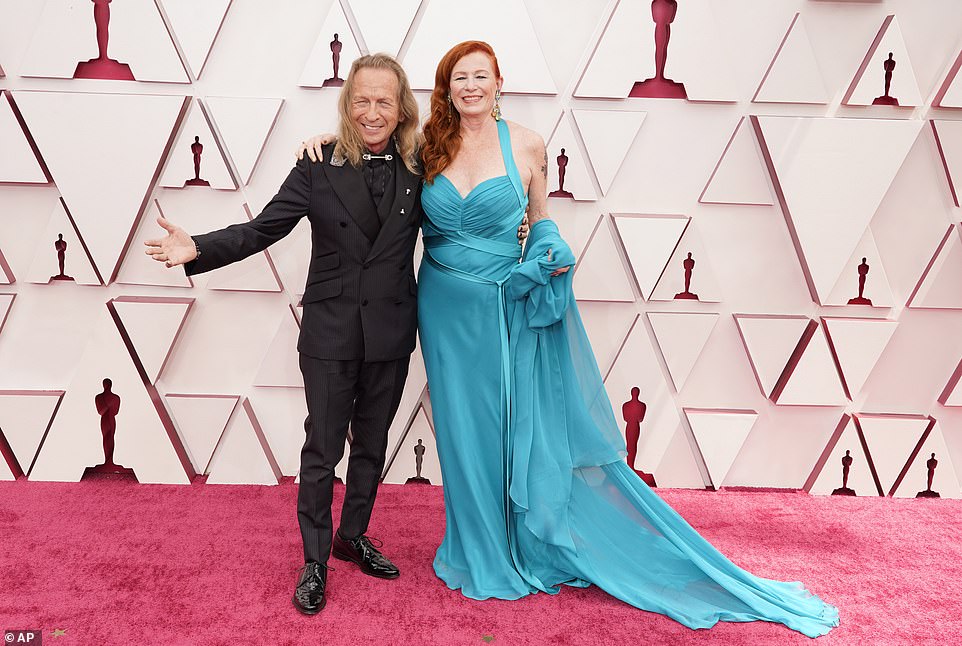 Ready to roll: Paul Raci, left, in a black suit and Liz Hanley Raci in a teal gown

If Anything Happens I Love You 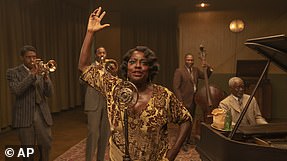