The shattered husband of a young woman who died from ovarian cancer at 26 has revealed the four telltale signs everyone should know about in a bid to help others avoid his heartbreaking grief.

Rebecca Hurst was only 25 when she was diagnosed with a rare subtype of stage four ovarian cancer in April 2019.

Described as ‘super fit and healthy’, she was a non-smoker with no family history of cancer who rarely drank and enjoyed an active lifestyle.

Despite rounds of chemotherapy and multiple surgeries, including an eight-hour operation to remove a tumour the size of a brick, Rebecca lost her battle on November 30, 2020, just over 18 months after her diagnosis. She was 26 years old.

Rebecca’s husband Ryan, who she married in a backyard ceremony at their home in country Victoria just three months before her death, is keeping her legacy alive by warning others about the vague symptoms she experienced.

Ryan told Daily Mail Australia his wife became bloated for no apparent reason, felt full after eating tiny amounts of food, lost her appetite and started to use the bathroom much more frequently in the months before her diagnosis. 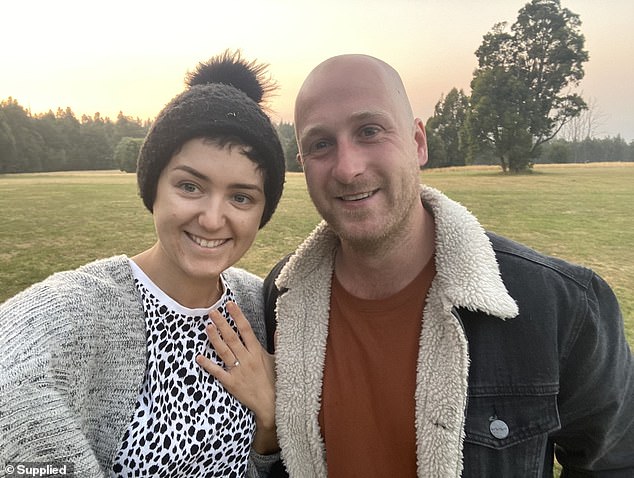 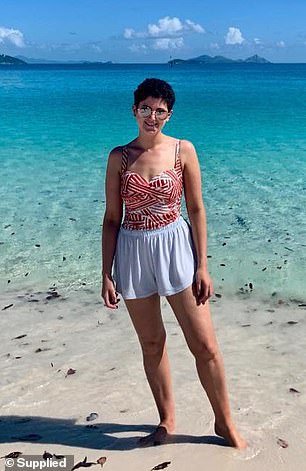 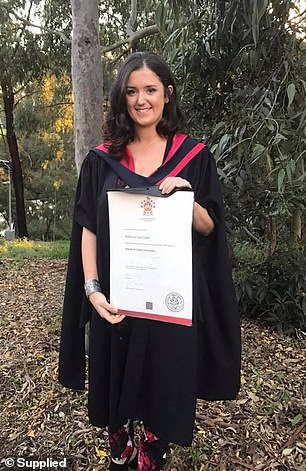 Described as ‘super fit and healthy’, Rebecca (left, on holiday and right, at her university graduation) was a non-smoker with no family history of cancer who rarely drank and had always enjoyed an active lifestyle

But neither of them ever suspected the cause could be anything as sinister as terminal cancer.

‘The thing is the symptoms are so vague they can be palmed off as different things,’ Ryan said.

‘And because she was so healthy, no one in the family ever imagined it could be what it was.’

It wasn’t until November 2018 that they started to piece together the seemingly commonplace, unrelated symptoms.

After months of consultations and blood tests, Rebecca was finally given an abdominal ultrasound which she described as ‘the end of the beginning, and the start of something very serious’. 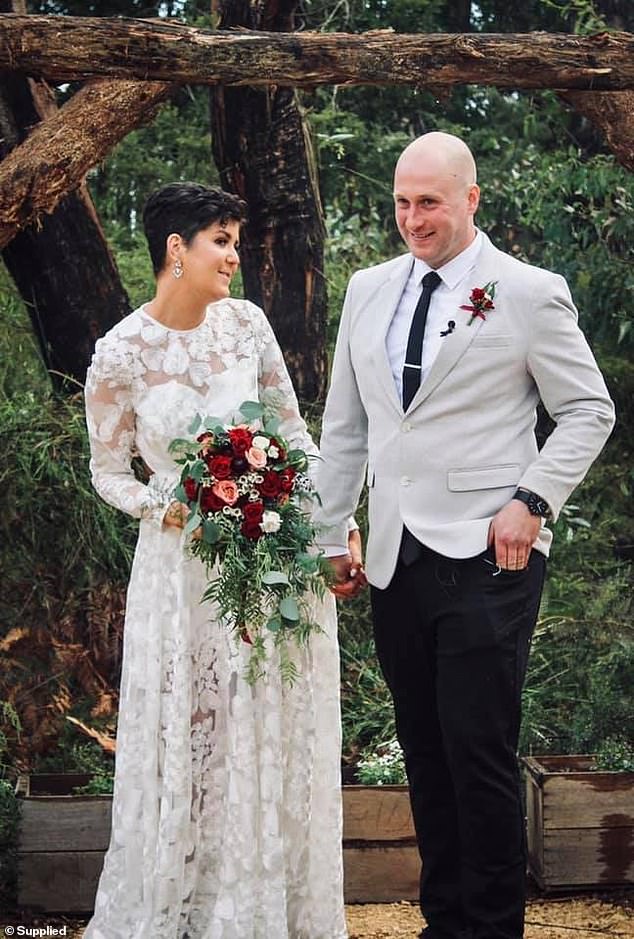 Rebecca married her fiancé Ryan, 28, surrounded by their parents and one friend in an intimate backyard ceremony during lockdown at their home in Kinglake West in Victoria (the couple are pictured on their wedding day on August 4, 2020) 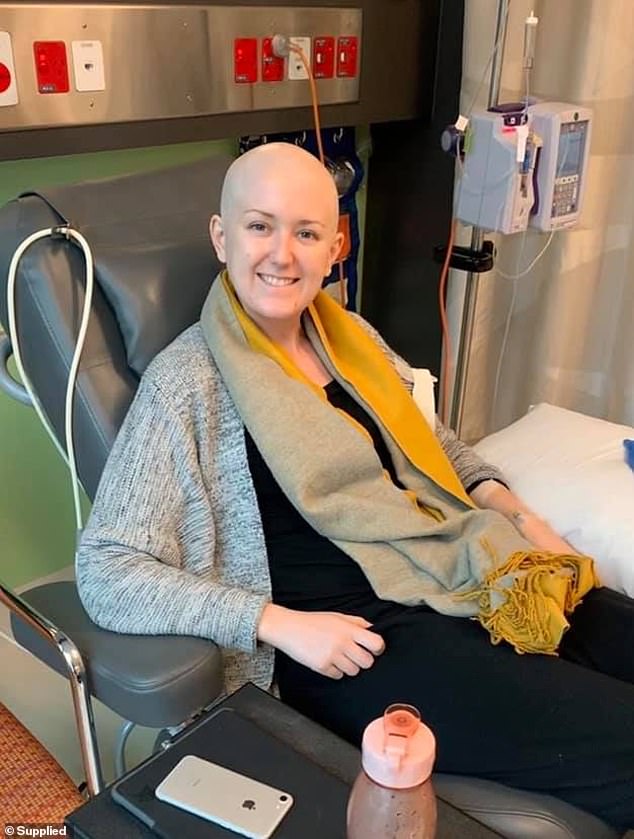 Rebecca (pictured during treatment) was one of an estimated 1,068 Australian women who lost their lives to ovarian cancer in 2020

The scan revealed a mass so large that doctors were unable to determine whether it was growing from her bowel or her ovaries.

On August 4, 2020, Rebecca married her fiancé Ryan, 28, surrounded by their parents and one friend in an intimate backyard ceremony during lockdown at their home in Kinglake West, VIC.

‘It was really special even though there was only five people there,’ Ryan said.

‘From the minute she walked out it was like the day just lifted her – it was like she wasn’t sick, just for that day. I wouldn’t have changed it at all.’

Rebecca Hurst was one of an estimated 1,068 Australian women who lost their lives to ovarian cancer in 2020, government health department research shows.

It is the sixth most common cause of death from cancer among Australian women, behind lung, bowel, stomach, liver and breast. 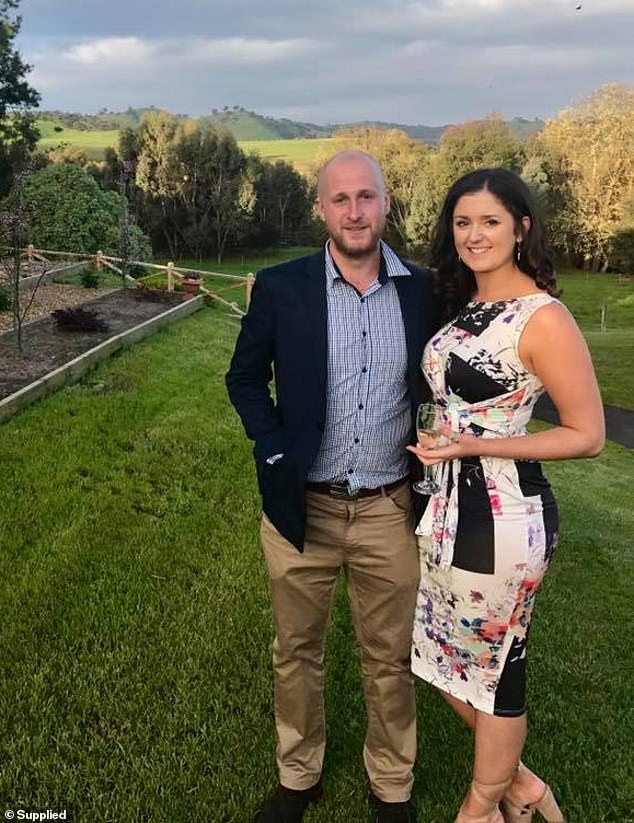 In the months before her diagnosis, Ryan said Rebecca became bloated for no apparent reason, felt full after eating tiny amounts of food, lost her appetite and started to use the bathroom much more frequently – all telltale signs of ovarian cancer

Ovarian cancer is notoriously difficult to detect because early stage symptoms are vague and easily confused with those of less sinister illnesses like irritable bowel syndrome (IBS).

Common warning signs include abdominal bloating, feeling full after small amounts of food, an urgent need to urinate and constipation, as well as indigestion, fatigue and pain during sex.

Sufferers may also experience pain in the lower back, stomach or pelvis and sudden, unexplained weight loss.

–  Ageing (risk increases for women over 50)

– Early onset of periods (before 12 years) and late menopause

– Women who had their first child after the age of 35

– Back, abdominal or pelvic pain

Unlike cervical, breast and colon cancer, there are no screening programs for ovarian cancer.

A specialist blood test that detects the CA125 protein – which is produced by ovarian cancer cells – can be used to diagnose the disease.

However conditions including menstruation, endometriosis and benign ovarian cysts also cause this protein to develop, meaning the test alone cannot be used to confirm the presence or absence of cancer.

In addition more than 50 percent of women with early stage ovarian cancer do not show elevated CA125 levels, which means internal ultrasounds must be performed in conjunction with the blood test for a conclusive diagnosis.

All types of ovarian cancer are highly treatable if the patient receives care in the initial stages, but mortality rates remain high due to the lack of effective measures for early detection. 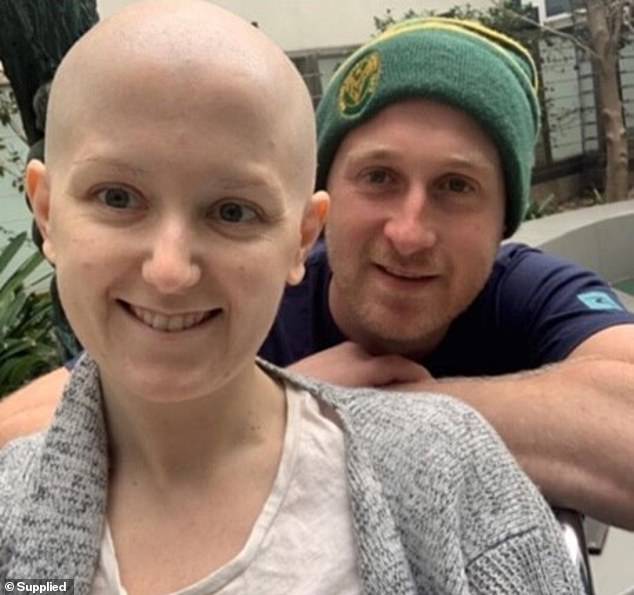 During treatment, Rebecca (pictured with Ryan) walked 94km and raised $10,700 for cancer research

The subtype that Rebecca was diagnosed with – low grade serous ovarian cancer – is rare and does not respond as well to chemotherapy as other forms.

During treatment, Rebecca was determined to prove that cancer patients can still achieve great things.

Fighting the debilitating side effects of chemotherapy, she walked 94 kilometres and raised $10,700 for The March Charge, a month-long fitness challenge undertaken to raise funds for life-saving cancer research.

Ryan is bravely sharing his wife’s story to raise awareness about the early signs of ovarian cancer and keep her memory alive.

‘I know that it would make her proud of me. Her strength and courage was absolutely inspirational, right until the end,’ he said.

Ryan urged others to look for second opinions if doctors are providing what you deem to be unsatisfactory or dismissive answers.

‘You know your own body better than anyone else. If you have doubts, keep pushing,’ he said.

Will the Altcoins Flip to Their Previous Positions?

A horrific crime in Mumbai ... she refused to give him alcohol, so he slaughtered her and smashed her head!

In pictures: Troops guard US Capitol, one week after riots

A secretive Airbnb team, which works to keep disasters out of the press, paid an Australian...