Looking to stave off lockdown boredom with a little online shopping? This week sees one of the UK’s most eclectic art collections going on sale in a live virtual auction – and you could pick up a 65-million-year-old dinosaur skull, a floating giraffe named Gerard, or an antler chair that has housed the derriere of Liam Gallagher.

The treasure trove of eccentric artefacts, said to be worth £2million, are housed at the Aynhoe Park mansion in Oxfordshire, made famous for hosting Jade Jagger’s wedding and Noel Gallagher’s 50th birthday party – and will be on sale with auction house Dreweatts on the 20th and 21st January.

Owned by Sophie and James Perkins, this week’s sale comes ahead of the couple and their three children moving onto their next country estate, Grade I-listed Parnham House in Dorset. Sophie says the artefacts ‘belong at Aynhoe’ and so should be sold ahead of their move. 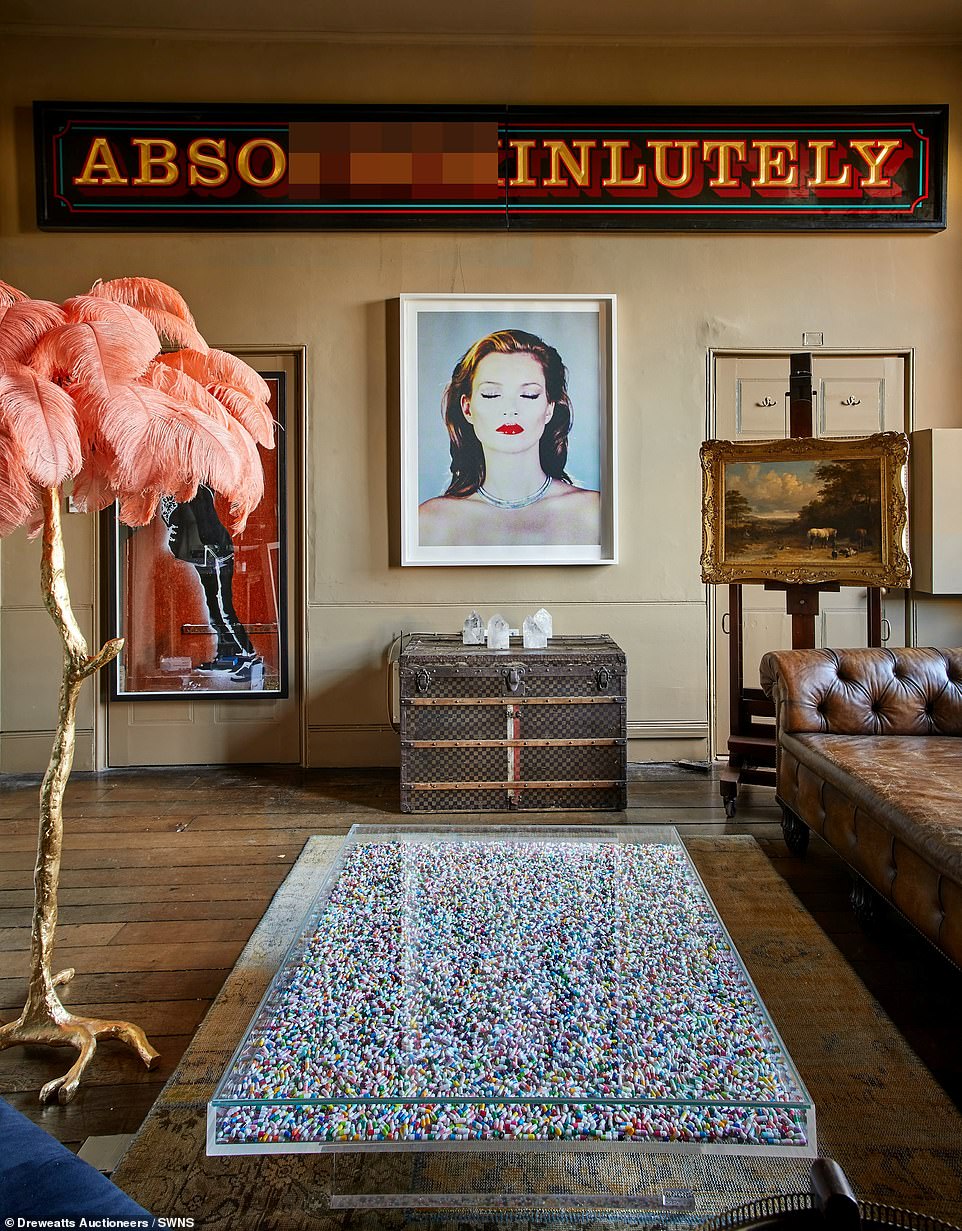 Lockdown purchase? Among the items being put on sale this week by James and Sophie Perkins, who own Aynhoe Park mansion in Oxfordshire, is a £35,000 Kate Moss portrait with with hand-applied Swarovski crystals 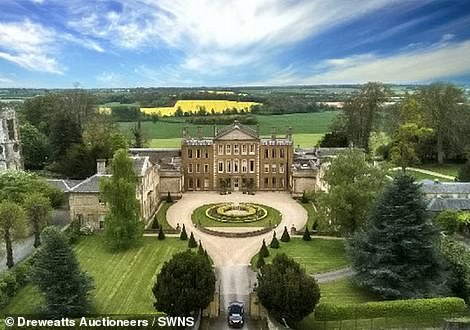 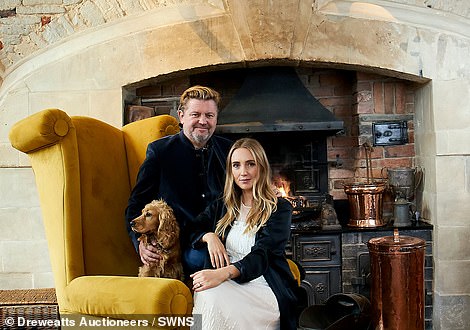 The stately home in Oxfordshire has been a regular haunt for celebrities, with Noel Gallagher hosting his 50th birthday party here. Aynhoe Park’s owners, James and Sophie Perkins, have decided to sell of some of the unique pieces they own in an auction set to raise £2million 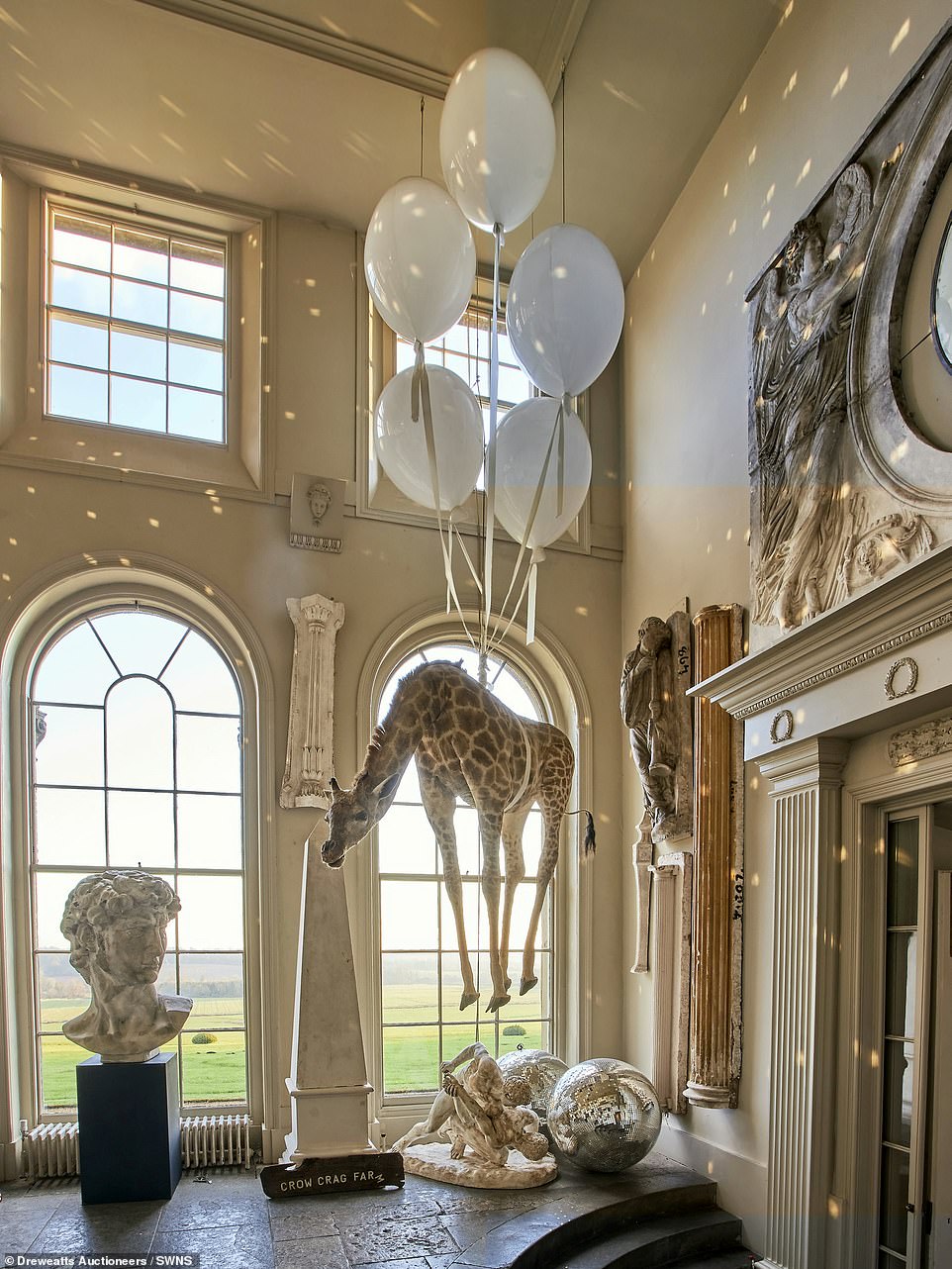 The grown-up playground has curios in almost every room of the home which the couple have called home since 2006. Owner James says Gerald the flying giraffe (pictured) is among his personal favourites from the collection

Collected over 25 years, the catalogue of items includes a £35,000 Kate Moss portrait with with hand-applied Swarovski crystals, a huge plaster cast of a section from the Acropolis in Athens and a red chair bearing the Queen’s Royal Cypher, thought to have once been owned by a judge.

Every room of the Grade I Palladian country house that has been the family home of James and Sophie Perkins since 2006, is adorned with fascinating artworks, sculptures and curios.

Described as a cross between Downton Abbey and Narnia, the palatial pile has been a playground for celebrities from the music, film, art and fashion as well as hosting weddings and lavish parties.

From a giant white statue of Hercules wearing a gold watch around his neck, a stuffed zebra rocking-horse, flamingos, circus lights and a polar bear wearing a captain’s hat, the 17th century stately home has been called ‘a museum crossed with a fantasy world’. 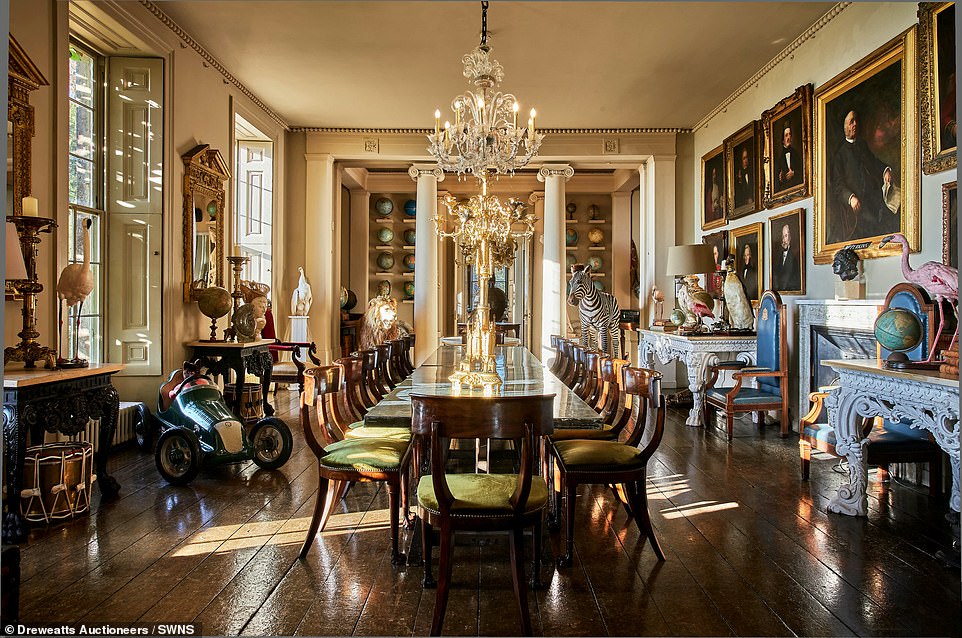 Designer Matthew Williamson is among those to have items in the Perkins’ collection, and has said the house is ‘magical, unique and unforgettable’ (Pictured: some of the couple’s art works in the dining room of the mansion) 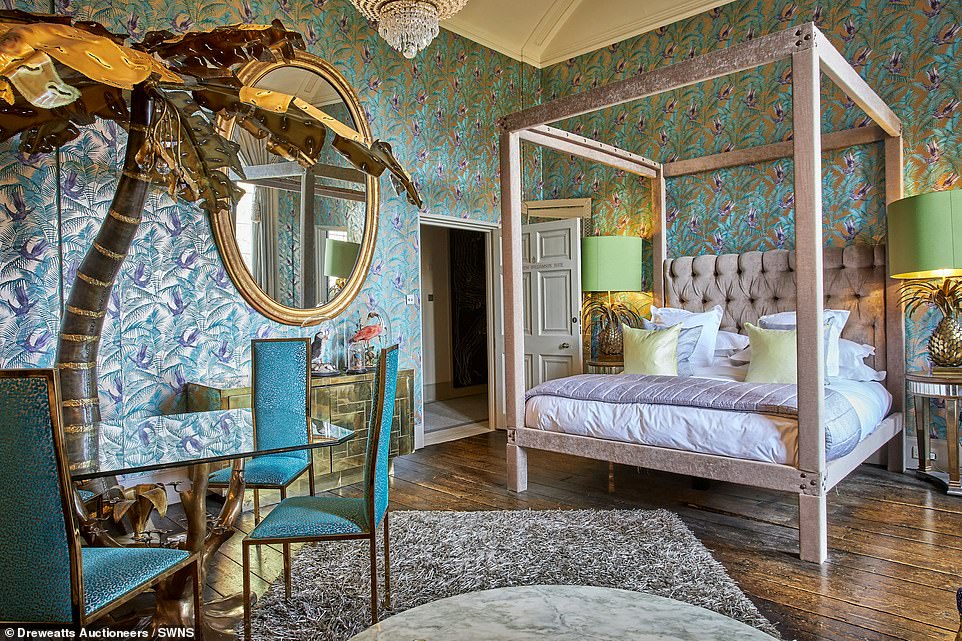 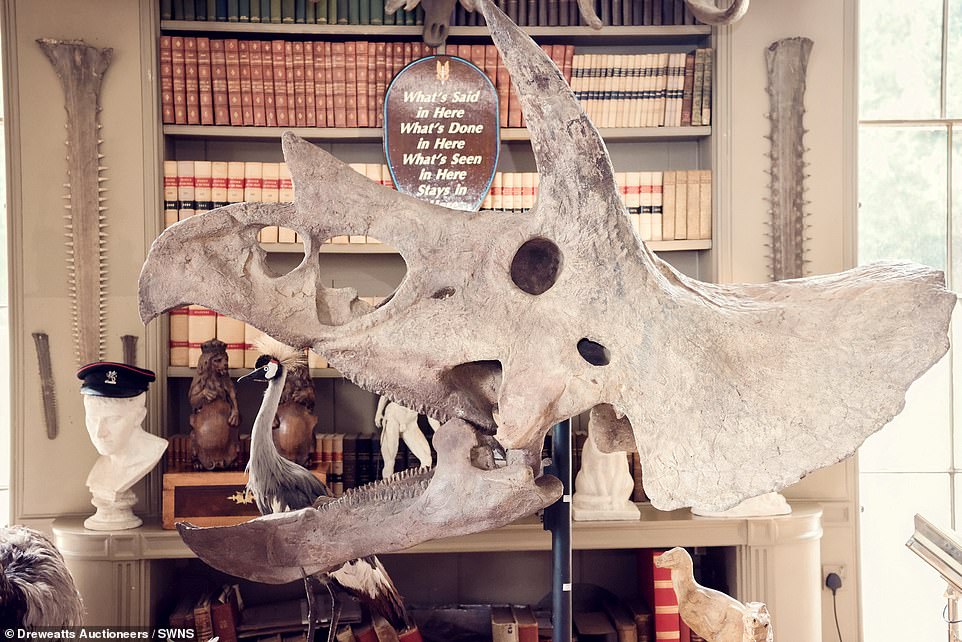 Big hitter: This 65-million-year-old triceratops skull is expected to fetch around £250,000 in the auction

Books, furniture, taxidermy, modern design and objects such as a 65-million-year-old triceratops skull, which could make up to £250,000, litter the ornate 28-bedroom home.

One stand-out item is a 1959 Le Mans tribute half-scale model of the winning Aston Martin DBR1 that is kept in the library.

The static model worth around £15,000 was created to commemorate the victory by Roy Salvadori and Carroll Shelby at the 24-hour race.

Before becoming a property developer with a taste for the eccentric, James made his fortune organising legal raves in the 1990s. Along with wife Sophie, he now works on projects restoring properties, including Aynhoe Park. 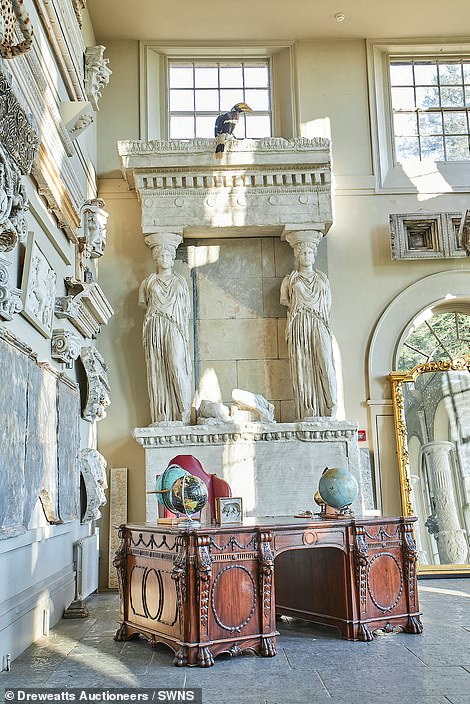 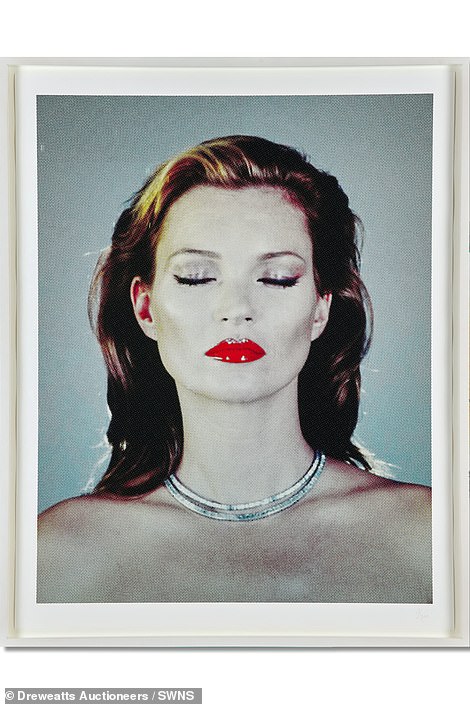 The house has been described as an ‘Aladdin’s cave’ of treasures, with Kate Moss’ portrait in crystals expected to be among the more expensive items sold 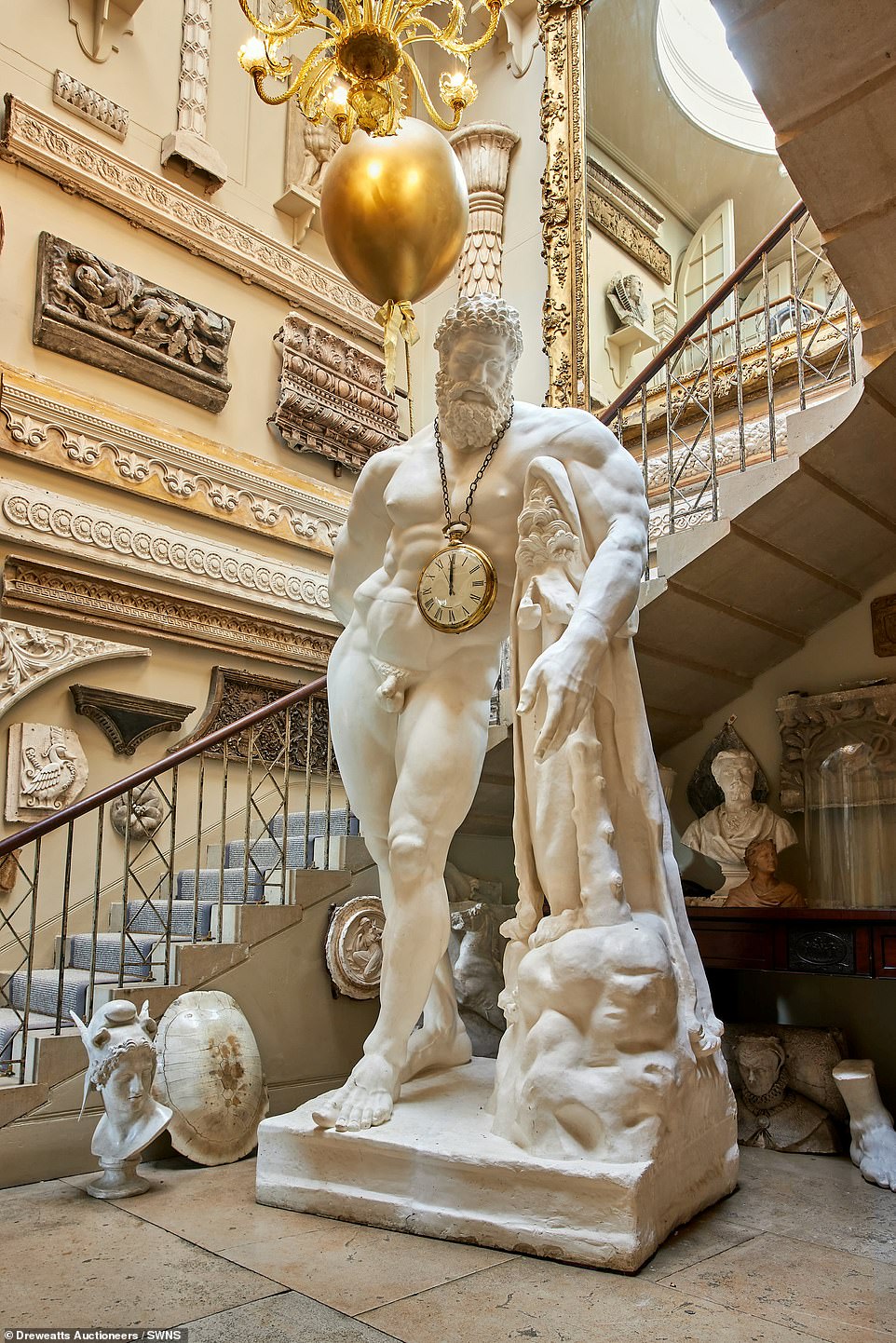 A little  something for the hallway? A giant white statue of Hercules wearing a gold watch around his neck is among the items listed 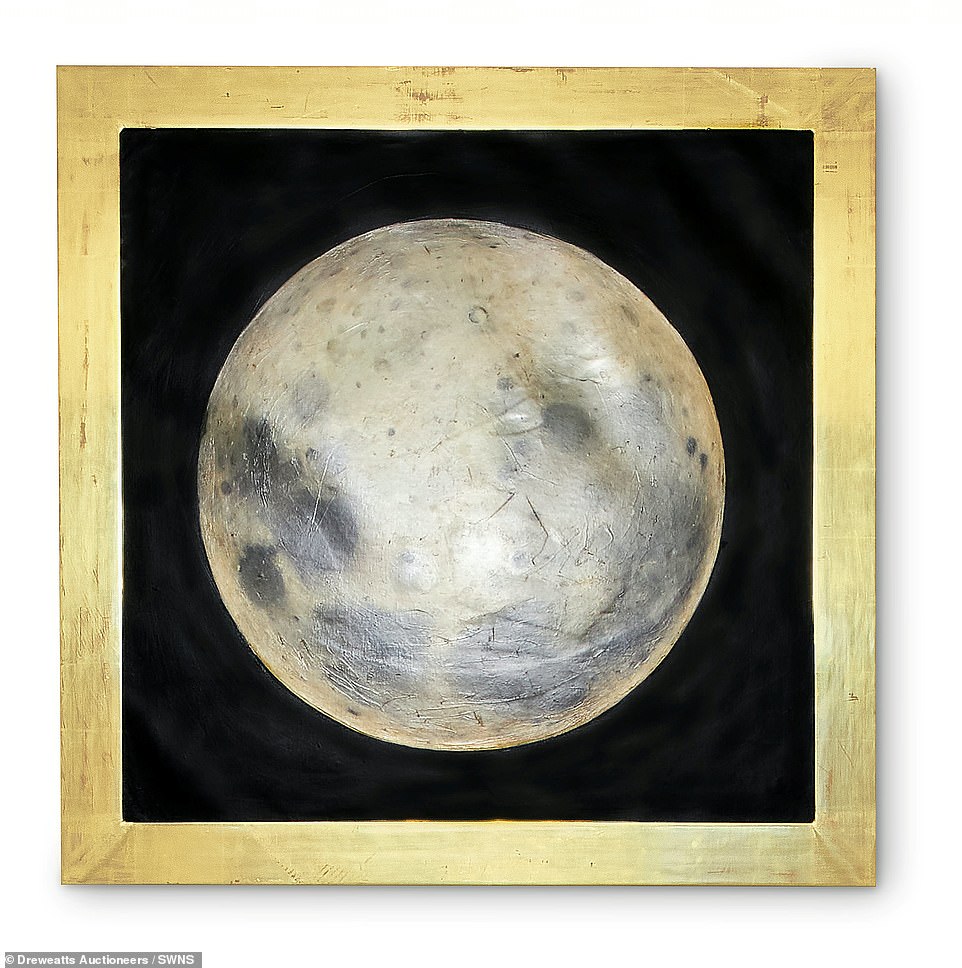 Another favourite of the owners is a painting of the moon, which could sell for £5,000

Auction bosses say the whole collection is expected to fetch between £1.2m and £2m, but this is very likely to be exceeded as bidding is already taking place online and many items are exceeding their estimates.

Nearly 700 lots make up the The Celebration of a Modern Grand Tour auction, held from January 20 to 21.

James, 50, said: ‘It’s a chance to buy a piece of history. Aynhoe Park is evocative of the modern Grand Tour, hence the auction title. It is furnished with a collection of iconic objects and curiosities from our travels across the globe.

‘It has been my passion, as well as a family home. We have enjoyed carrying on the tradition of Aynhoe Park by sharing and hosting our home with the most respected people from the world of business, film, fashion, art and music.’

When asked what his fondest memories of Aynhoe will be, he replied: ‘It has to be our four day wedding two years ago such an incredible coming together of special friends from across the globe to witness our marriage followed by the most incredible three days of partying in what turned about to be the hottest few day on record for April.’

Other artefacts for sale include a unicorn statue estimated to fetch between £5,000 and £8,000 and a steamer trunk with ‘first class Orient Express’ written on the side. 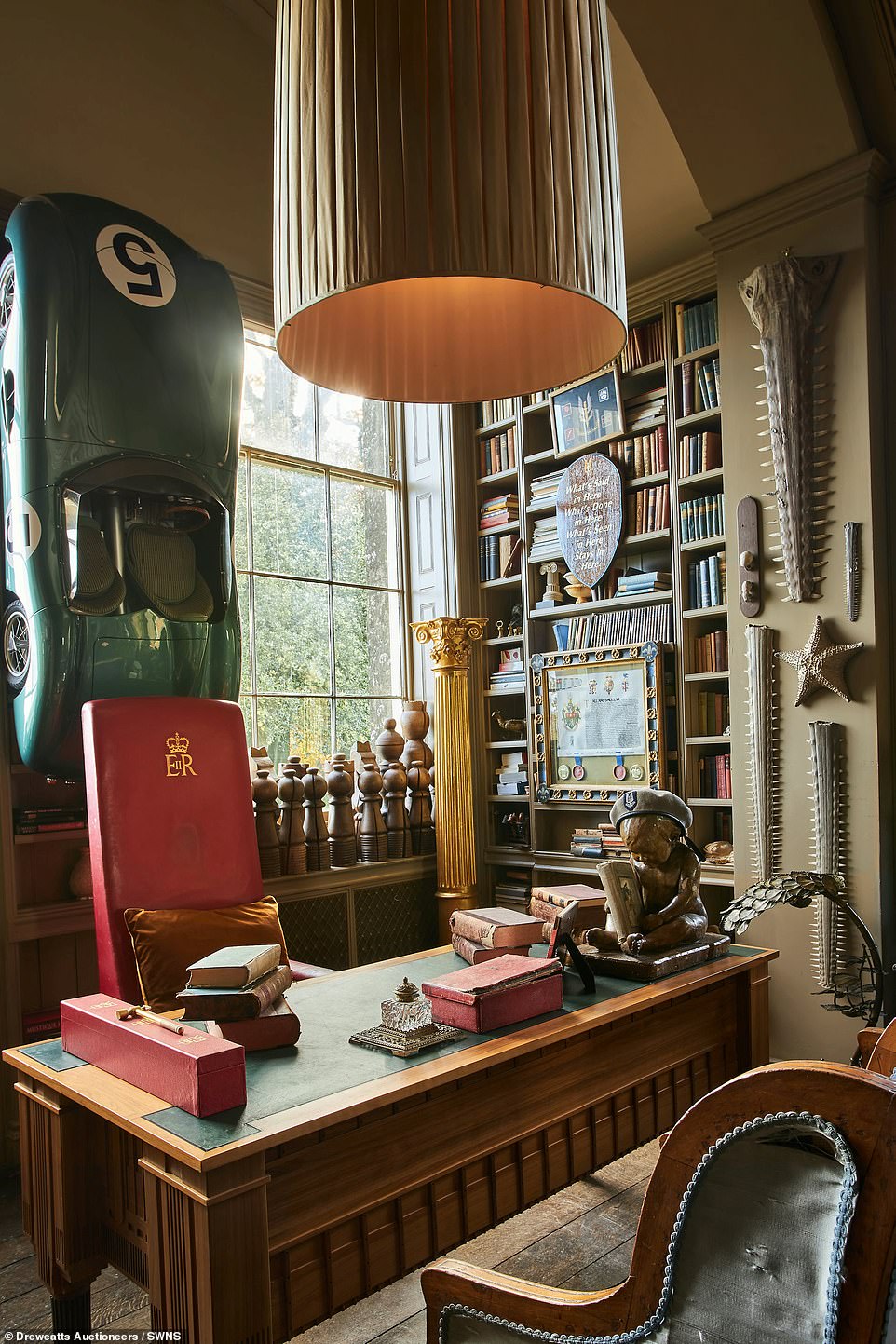 Behind the desk in the drawing room sits a perfect replica of an Aston Martin DBR1, which ran in the 1957 Le Mans grand prix 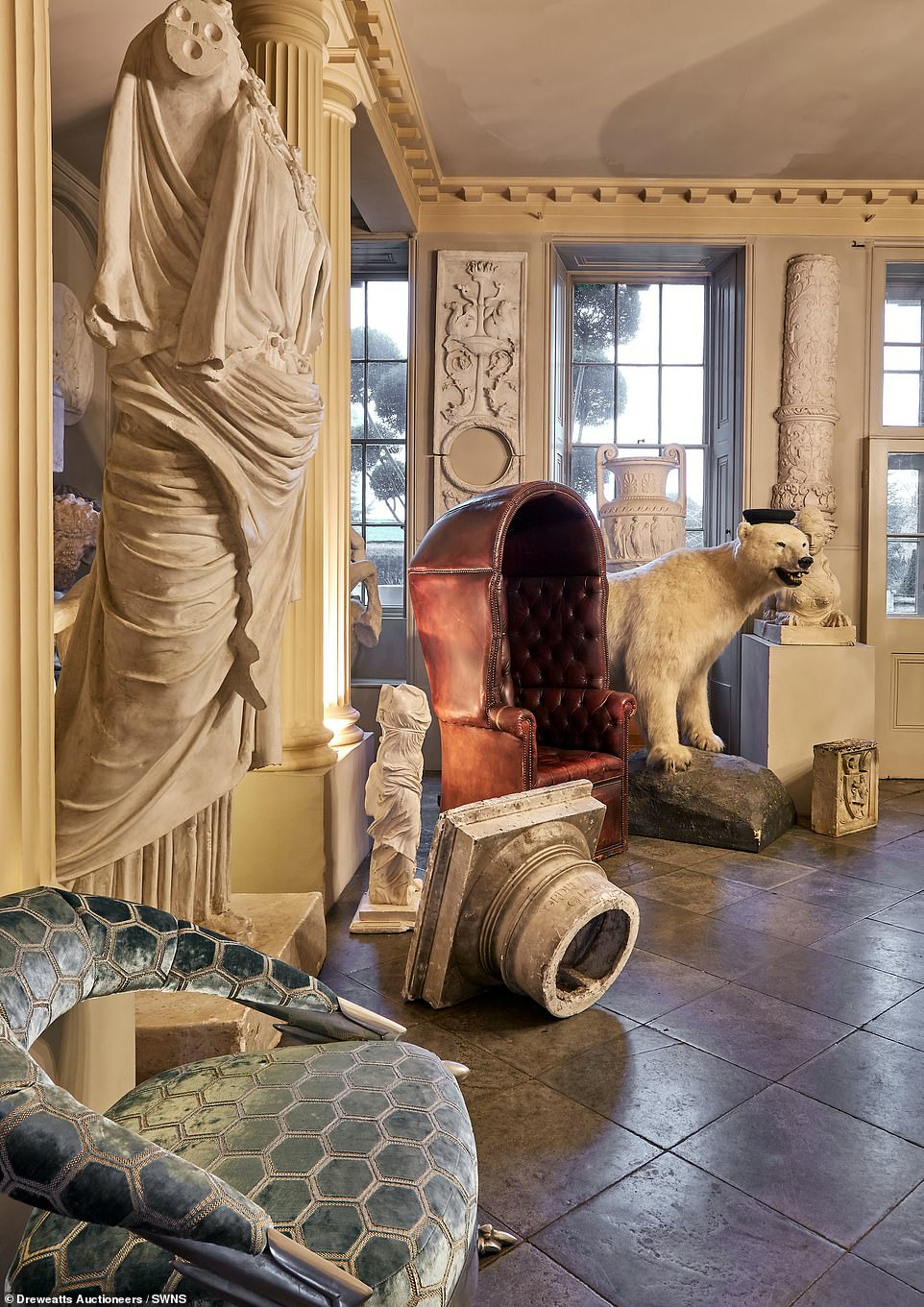 The couple are moving house hence the sale, with the family of five heading to Grade I-listed Parnham House in Dorset

A pair of Zaffre glass and metal commodes that could sell for as much as £35,000, a painting of the Moon worth around £5,000 and ammonite fossils are also for sale.

On the couple’s personal favourite pieces, James added: ‘For me probably Gerald my flying giraffe and the Aynhoe moon painting, and the Battersea desk plus the dinosaur.

It is going to be hard to see these fascinating objects collected over so many years being sold, but they belong at Aynhoe…

‘But for Sophie I know she loves the Duval Brasseur bug wall lights and our red ER chair, plus the brass and jewelled parrot in the Matthew Williamson suite, as it’s so beautifully made.

‘The triceratops skull was bought many years ago and has been our pride and joy appealing to everyone that visits, it has such presence and scale.

‘It is going to be hard to see these fascinating objects collected over so many years being sold, but they belong at Aynhoe and with those that have so many fond memories and so they will become mementos and talking points amongst those admirers of times past here at Aynhoe.

‘And one day I can go shopping again.’

James and Sophie Perkins have sold Aynhoe and along with their three children, are due to move to their next project – restoring Grade I-listed Parnham House in Dorset, which was nearly completely destroyed in a suspected arson attack by its former owner in 2017.

Describing the sale and the collection, Will Richards, deputy chairman of auctioneers Dreweatts said: ‘Aynhoe Park really is an Aladdin’s cave of beautifully-chosen works, from the academic to the more eclectic and from the ancient to the contemporary.’