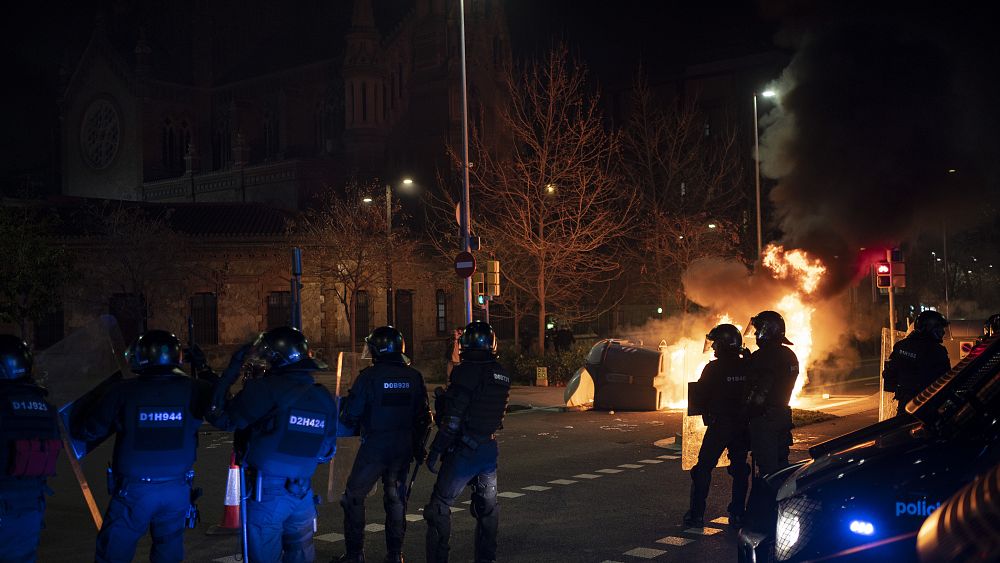 Protests over the imprisonment of a rapper convicted of insulting the Spanish monarchy and praising terrorist violence were marred by rioting for the third night in a row Thursday.

The plight of Pablo Hasél, who began this week to serve a 9-month sentence in a northeastern prison, has triggered a heated debate over the limits of free speech in Spain and a political storm over the use of violence by both the rapper”s supporters and the police.

The ruling coalition’s junior partner, the far-left United We Can (Unidas Podemos) party, on Thursday filed a petition for a “total pardon” for Hasél and another rapper, Valtònyc, who fled to Belgium in 2018 to avoid trial on charges of “glorifying” terrorism.

But potentially deepening the tension, court authorities in the northeastern Catalonia region announced that Hasél lost a recent appeal and is looking at an additional prison sentence of 2 1/2 years for obstructing justice and assault in 2017. The sentence can be appealed again before the country’s Supreme Court.

Like the two previous nights, the protests began Thursday with large gatherings in several cities that were, at first, mostly peaceful.

In Catalonia’s regional capital, Barcelona, hundreds sang songs, rapped and shouted “Pablo Hasél, freedom!” and “Spanish media, manipulators!” at a central square before dozens broke off the main group to set alight a barricade of trash containers and a construction skip that blocked a main city artery, hurling stones, bottles and other objects at riot police.

There were moments of tension as flames threatened to extend to nearby buildings before firefighters arrived.

In the eastern coastal city of Valencia, police used batons to disperse protesters and arrested at least eight people, according to the Spanish government’s regional delegation.

Nearly 80 people have been arrested and more than 100 injured since Hasél was taken away from a university where he had sought refuge after refusing to show up at prison voluntarily.

The facades of several political parties’ headquarters have been graffitied, a police station in the town of Vic was battered and protesters significantly damaged shop fronts and bank offices in several cities, including the capital, Madrid.

The Catalan regional police has also launched an internal investigation to establish whether one of their foam bullets hit a youth who lost an eye in the protests.

The rapper and his supporters say Hasél’s nine-month sentence for writing a critical song about former King Juan Carlos I, and for dozens of tweets that judges said glorified some of Spain’s defunct terrorist groups, violates free speech rights.

Besides that case, the rapper has previously faced other charges or has pending trials for assault, praising armed extremist groups, breaking into private premises and insulting the monarchy.

His legal situation has drawn considerable public attention because it comes after a string of other artists and social media personalities have been put on trial for violating Spain’s 2015 Public Security Law, which was enacted by a previous conservative-led government and criticized by human rights organizations.

One of them was Valtònyc, who has so far avoided extradition from Belgium.

United We Can parliamentary spokesman Jaume Asens said Thursday the party had triggered the first step to demand an “urgent” and “total” pardon of both rappers. Pardons are a bureaucratic process and need the final approval from the Spanish government, which is currently in the hands of a left-wing coalition led by Prime Minister Pedro Sánchez and Asens’ party.

And although both parties have agreed to amend the criminal code to eliminate prison terms for offenses involving freedom of speech, the protests have also opened the latest divide in the shaky partnership after the opposition lambasted United We Can for not publicly condemning the violent protests.

Deputy Prime Minister Carmen Calvo, a member of the center-left Socialist Party, also criticized a United We Can spokesman who expressed support for what he called “antifascist protesters fighting for freedom of expression.”