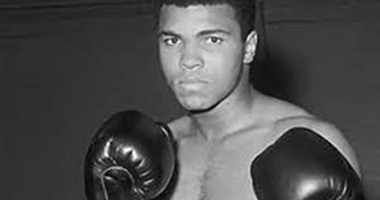 An auction in New York City, America, sold 26 paintings by the late boxing legend, Muhammad Ali, for a sum of nearly one million dollars, and sold specifically for 945,524 dollars.

Among the works, a felt-tip pen drawing of the late boxing legend about the sport of boxing fetched more than $425,000 at an auction in New York on Tuesday of his little-known artwork, according to Russia’s Sputnik agency.

While the painting called “Sting Like Bee” or “Sting as a Bee”, which he drew on paper in 1978, was the most requested work among more than 20 paintings, and estimates prior to the sale indicated a price between 40 and 60 thousand dollars.

He wrote on the drawing, “Fly like a butterfly and sting like a bee!” Ali is famous for using this phrase to describe his style of boxing.

Bonhams Auctions said 26 paintings by Muhammad Ali sold for a total of $945,524, more than three times the minimum initial estimate. others.

Ali’s paintings and drawings up for auction came from the collection of Rodney Hilton Brown, who worked with Ali on his artwork.

Body language is a powerful and effective way to communicate messages in a subtle way, and in fact, it...

The role that smartphones play in our lives is huge considering that the average person spends more than 4...

How to make crunchy chicken like shops in simple steps

Crispy chicken is one of the favorite meals of many children, and mothers try to cook it in different...

5 tips to follow in the care of oily hair .. Excessive use of gel is prohibited

Among the various hair problems that people face every day, the problem of oily hair remains relevant among almost...

Natural recipes from guava for skin care..Treatment of acne scars and other problems

Guava fruit contains all the important nutrients of vitamins and minerals, which help in strengthening the body's immunity and...

Weight gain is the most prominent.. Learn about the causes of lower back pain