Palestinian leaders have insisted that a foul-mouthed recording purportedly of president Mahmoud Abbas insulting China, Russia and the US, is fake.

Allies of the 85-year-old leader claim that the audio, which has been shared widely on social media, is designed to smear him ahead of upcoming elections.

The clip is said to have been secretly recorded at a Fatah party meeting on April 19 when an unidentified attendee asked Abbas what his message was to China on the 100th anniversary of the Chinese Communist Party.

The rant continues: ‘And Russia, America, and all the Arabs. What’s wrong with you? All of you go to hell.’ 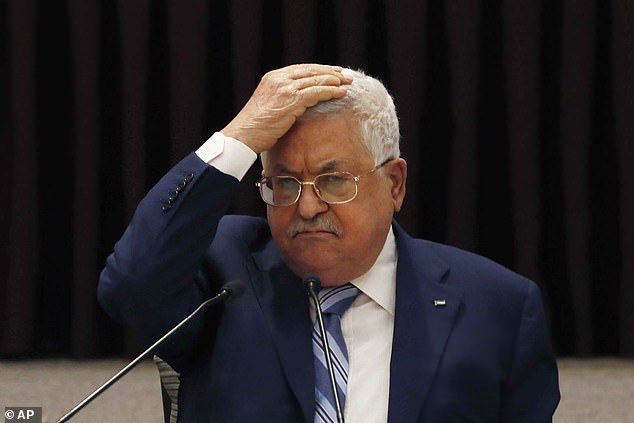 Palestinian President Mahmoud Abbas gestures during a meeting with the Palestinian leadership, in the West Bank city of Ramallah on August 18, 2020. The president is under great pressure ahead of elections, the first in Palestine in 15 years. The polls, scheduled for next month, were today delayed amid splits in the Fatah party and over whether the vote should be held in Israeli-annexed East Jerusalem.

The clip was shared online by anti-corruption activist Fadi Elsalameen, a prominent critic of the Palestinian regime who has claimed that he has received death threats from Abbas-backed terrorists.

Abbas confidantes were quick to pour scorn on the claims that their boss would have launched such a vulgar tirade.

A member of Abbas’ Fatah party council told Russia Today: ‘What was published is a voice composite on a picture and may be fabricated. Those who published this are parties whose aim is to offend the Palestinian leadership and strike its relationship with the countries mentioned.’

Mahmoud Al-Habbash, the president’s religious affairs adviser, wrote on Facebook: ‘The destructive fabrication, which is falsely attributed to the president, did not and will not succeed in influencing our steps and our national fight against occupation.

‘Nor will it succeed in confusing our relations with our brothers, our friends whom we cherish, their supportive attitudes, our national cause, our legitimate rights to liberation, independence, and our independent state with Jerusalem as its capital.’

Critics of Abbas claim the recording proves concerns that the elderly president is in mental and physical decline and ‘lashing out’ as he faces pressure in the upcoming elections.

Those polls were today delayed amid an ongoing row within the Fatah party and over whether the vote should be held in Israeli-annexed East Jerusalem.

Many Palestinians were sceptical from the start on whether parliamentary and presidential votes planned for May and July would even take place after they were announced by Abbas in January.

Abbas has been in power since 2005 and there have long been questions over who will succeed him.

Peace talks between Israel and Palestine have been put on ice since Jerusalem agreed historic deals with Arab nations, brokered by the Trump administration.

‘Abbas has been under immense pressure to hold elections after being marginalised for the last four years by former president Donald Trump and a number of Arab states,’ Jonathan Schanzer, a Middle East expert told The Washington Free Beacon.

‘He has felt alienated. Now he is boxed in. He is lashing out.’ 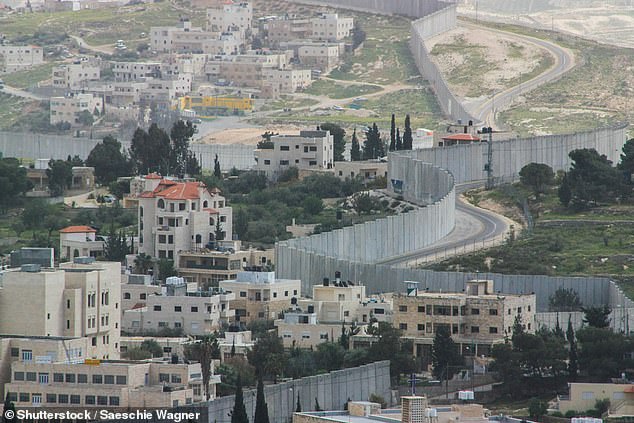 The wall between Palestinian territory and Israel. Palestinians seek East Jerusalem as the capital of a future independent state in the West Bank and Gaza, territory Israel captured in the 1967 Middle East War. Israel annexed East Jerusalem in 1980 but the move has not been recognised internationally. The area is still considered as occupied by most of the international community, although Israel deems Jerusalem its ‘eternal and indivisble’ capital.

The timing of the long-awaited polls was largely seen as a bid to reset relations with Washington under President Joe Biden.

Earlier this month, Biden began to restore U.S. aid to Palestinians in the occupied West Bank and Gaza that was cut under predecessor Donald Trump.

Wasel Abu Youssef, an Abbas confidant and member of the Palestine Liberation Organization’s Executive Committee, confirmed to Reuters on Tuesday that the issue of voting in Jerusalem was a key factor in Abbas’s thinking.

‘Any prevention or obstruction of holding elections in Jerusalem would entail a postponement,’ he said.

Another Palestinian official close to Abbas, Hussein al-Sheikh, said Israel had officially informed the Palestinians that it would not permit balloting in Jerusalem, the contested city at the heart of the Israeli-Palestinian conflict.

Palestinians seek East Jerusalem as the capital of a future independent state in the West Bank and Gaza, territory Israel captured in the 1967 Middle East War.

Israel annexed East Jerusalem in 1980 but the move has not been recognised internationally. The area is still considered as occupied by most of the international community, although Israel deems Jerusalem its ‘eternal and indivisble’ capital.

Highlights of Prince William and Kate Middleton’s wedding: 10 years after they were wed

Amazon delivers a variety of courses for written content creators to monetize their audiences. The e-commerce giant has affiliate-advertising equipment and strategies to provide products and solutions dwell....

Moment single father-of-two breaks down in tears as well-wishers offer to pay for food after he admitted he 'can't take it anymore' and is forced to eat his...