Panda Mei Xiang: Chinese web users urge their government to ‘save’ US-based bear from ‘being abused’


Chinese web users have accused a US zoo of ‘abusing’ an elderly panda loaned by China and urged authorities to ‘save’ the bear by bringing her back to the country.

They alleged that the Smithsonian National Zoological Park in Washington, DC, regularly underfed 22-year-old Mei Xiang – the oldest panda in the United States – and maltreated her.

The zoo has rejected the online allegations, stressing that Mei Xiang is eating plenty every day and being looked after well by keepers. 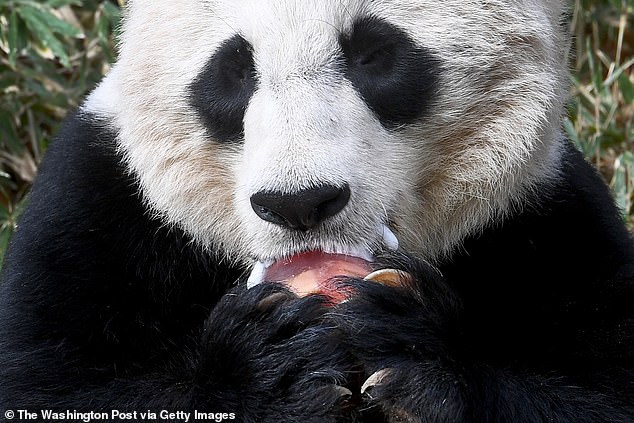 Chinese web users have called on authorities to bring panda Mei Xiang back to the country. The panda (pictured in February) arrived in the Smithsonian National Zoological Park in 2000 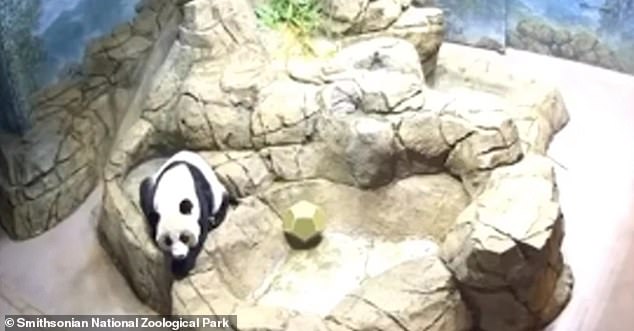 Users of Twitter-like Weibo have shared multiple security videos, said to be made public by the zoo, to prove the alleged abuse. One of them (above) was said to show Mei Xiang not being fed 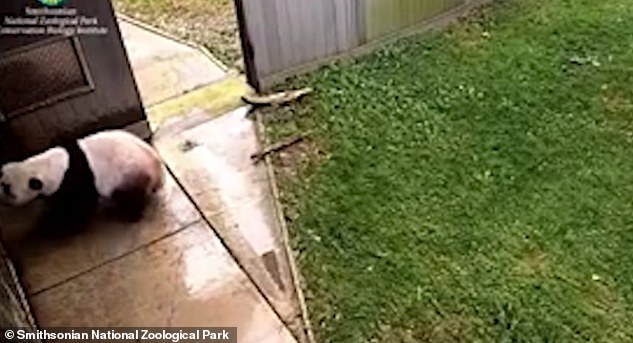 Another clip (above), said to be filmed on October 21, allegedly shows her begging for food

Mei Xiang, born in China’s Sichuan in 1998, was sent to the United States as a diplomatic gift in late 2000.

Users of Weibo, the Chinese equivalent to Twitter, have flocked to express their fury towards her US caretaker in trending topics, ‘Panda Mei Xiang‘ and ‘Save Mei Xiang‘.

The two hashtags have amassed more than 260million and 88million views respectively as of writing.

The netizens have shared multiple security videos, said to be made public by the zoo, to prove the alleged abuse.

In one of them, Mei Xiang is said to have been forced to beg her keepers to feed her on October 21 by repeatedly waiting by the gate of her enclosure.

One Weibo user who shared the clip wrote: ‘Hope you can come back soon and not to undergo hardship again.’ 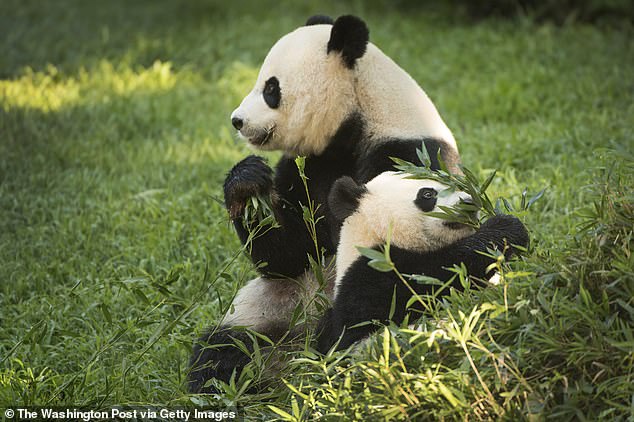 Mei Xiang is the oldest panda in the US and the second oldest documented in the world to give birth, according to the zoo. The picture shows Mei Xiang and her cub Bei Bei in August, 2016

In another clip, said to be filmed on October 27, Mei Xiang was allegedly given only leftover bamboo around lunchtime and ignored by keepers when she tried to get their attention.

A self-described panda lover, who uploaded the footage, accused the zoo of underfeeding Mei Xiang during the entire 20 years she spent in the US – without giving any details for the assertion.

The user claimed that Mei Xiang and her partner, China-born panda Tian Tian, were ‘living like stray cats and dogs’ and demanded the Chinese authorities not extend Mei Xiang’s lease to allow her to return.

The Smithsonian National Zoological Park has said that the online claims about Mei Xiang were ‘unsubstantiated’.

It said that the panda is eating more than 60 pounds of bamboo every day.

In a statement to MailOnline, the zoo stated: ‘The Smithsonian’s National Zoo’s Department of Nutrition Science uses best-practices and conducts scientific research to provide the best diets to the animals in the Zoo’s care.’

It added: ‘The team comprises two clinical nutritionists, a commissary manager, a laboratory manager, a food service specialist, a group of dedicated keepers, and a management support specialist.

‘Nutritionists work closely with the other animal care service departments and in coordination with the curatorial and keeper staff to ensure appropriate nutrition for all of the Zoo’s animals.’ 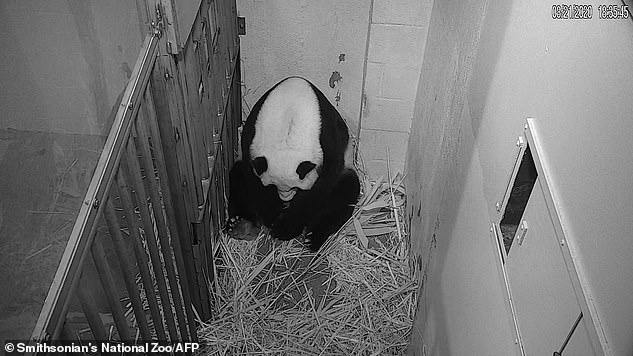 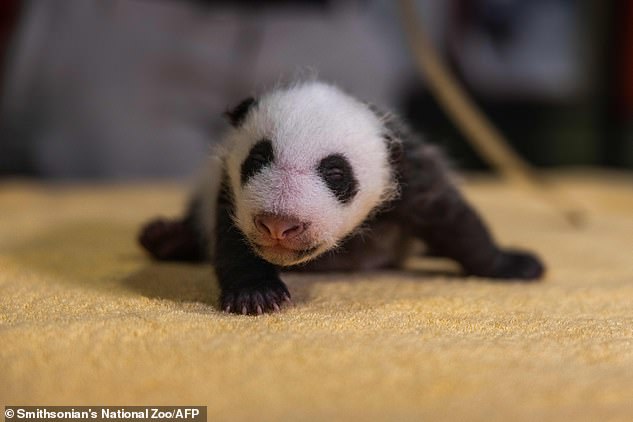 Mei Xiang’s youngest cub, seen on October 5 at six weeks old, has been confirmed to be male

This is not the first time Chinese web users have slammed the zoo for allegedly mistreating Mei Xiang.

A similar outcry broke out last month, and Chinese authorities had to release a statement to calm the critics.

On September 3, the China Research and Conservation Center for the Giant Panda, the state-run organisation responsible for Mei Xiang, refuted the accusations that the American zoo had abused Mei Xiang and her newborn cub. It recognised its US partner’s efforts in looking after the pandas.

Although the centre has not directly responded to the last controversy, its official Weibo account yesterday ‘liked’ a 2017 report by Chinese state broadcaster CCTV, which addressed related issues.

In the three-year-old report, CCTV claimed it had sent a journalist to the Washington zoo and denied that keepers had abused Mei Xiang. It said the panda was ‘healthy, happy’ and branded relevant allegations posts as ‘rumour’.

The Smithsonian’s National Zoo said it is in regular contact with its Chinese partners to provide them with updates about Mei Xiang.

Mei Xiang was born at the China Research and Conservation Center for the Giant Panda in Sichuan on July 22, 1998.

She and Tian Tian, who was born in the same centre in 1997, arrived in Washington, DC, on December 6, 2000. They are the second pair of pandas to live there.

Mei Xiang’s current lease will expire on December 7 this year.

‘The Smithsonian’s National Zoo and Conservation Biology Institute is currently discussing the arrangement of the giant pandas beyond Dec. 7, 2020, with our colleagues in China,’ the zoo said. 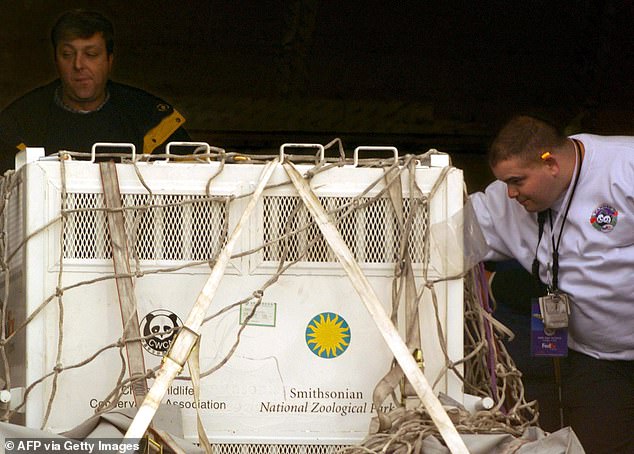 Mei Xiang is the oldest giant panda in the United States and the second oldest documented in the world to give birth, according to the zoo.

She delivered a male cub on August 21. Before that, she had given birth to three surviving cubs, all of which are now back in China.

Bei Bei, Mei Xiang’s second-youngest cub, was returned to China in November last year at the age of four.

Although it is hard to put an exact conversion rate between panda years and human years, pandas’ health seems to deteriorate four times faster than that of the humankind, a Chinese panda expert previously told MailOnline.

This means Mei Xiang is nearly 90 in human years.

WHAT IS CHINA’S ‘PANDA DIPLOMACY’? 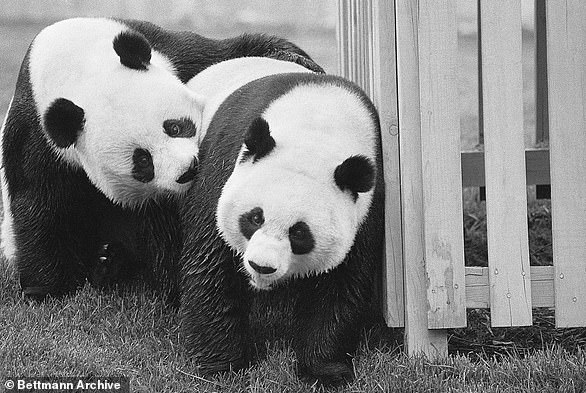 Hsing-Hsing and Ling-Ling (pictured) were the first pair of giant pandas sent to the US by China. They arrived in Washington, DC, in April, 1972

Giant pandas originated in western and south-western parts of China.

They mainly live in bamboo forests high in the mountains of Sichuan province and are used to cool weather.

China has been sending giant pandas to other countries as ‘diplomatic gifts’ allegedly as early as the Tang Dynasty (618-907).

It is said the country’s first female emperor, Empress Wu Zetian of the 7th Century, sent two pandas to Japan.

In modern times, the most famous case of ‘panda diplomacy’ took place in 1972.

China’s then-Premier Zhou Enlai gave two of those cute animal ambassadors to the United States two months after Richard Nixon’s made his landmark visit to Beijing to end 25 years’ of tension between the two nations.

The giant panda was shifted off the endangered species list in 2016 by The International Union for Conservation of Nature after years of intensive conservation efforts led by Chinese experts.

The latest census in 2014 found that there were 1,864 wild pandas in the world, according to World Wildlife.