Puppies adopted by Americans working from home throughout the pandemic are suffering from stress and anxiety as their owners return to work, a study says.

A team from Auburn University found these ‘pandemic puppies’ are fearful during encounters with other dogs and humans because they spent so much of their early lives cooped up inside.

They were also found to sometimes panic when exposed to an unfamiliar environment, and are struggling to cope with being alone as their owners return to the office as the United States reopens.

This, according to researchers, is because the animals were confined inside homes during their first three months of their lives, which are extremely important to its social development. 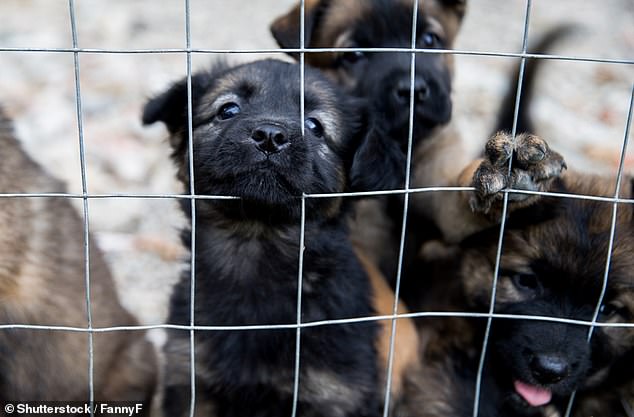 A team from Auburn University found these ‘pandemic puppies’ are fearful during encounters with other dogs and humans, and sometimes panic when exposed to an unfamiliar environment

Around 3 million Americans purchased or adopted a pet at the height of the pandemic, but now that restrictions are lifting for much of the US, these puppies are just now starting to explore the world – with many facing behavioral and social challenges.

One of these furry creatures is a soon to be one-year-old mixed-breed puppy named Gabby.

Scientists at Auburn University studied Gabby and found that she reacts with fear or uncertainty when she encounters new people or other dogs.

She is near panic when faced with a new environment or an unfamiliar situation. 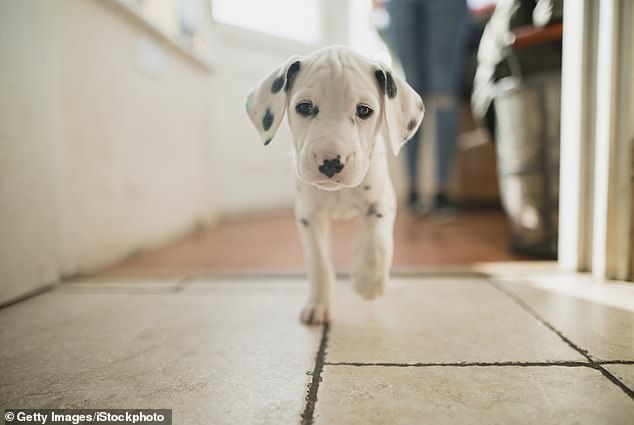 This, according to researchers, is because the animals were confined inside homes during their first three months of their lives , which are extremely important to its social development

And trips to the vet are stressful for both Gabby and her owner , all of which is due to the puppy staying inside and only with its owners.

Dr. Christopher Lea, assistant clinical professor in the Department of Clinical Sciences in Auburn University’s College of Veterinary Medicine said in a statement: ‘Primary socialization occurs during the first three to six weeks with a puppy’s littermates.

‘Then there is a secondary period of development from six to 12 weeks. This is when a puppy learns to interact with humans.’

‘During this time frame, puppies learn how to properly bond and socially communicate with both other dogs and people, as well as how to interact with and respond to different environments,’ Clutton said.

‘Simply put, dogs that are not properly exposed to a variety of individuals, objects, sights, sounds, smells and environments during this period may always be fearful of some of those same things.’

Not only were these pandemic pups secluded from the world like their owners, many of them were adopted by first-time owners who are more likely to make mistakes raising a young pet.

‘This produced a perfect storm of bad circumstances at a critical time in the developmental stages of these dogs,’ the researchers shared in a statement.

Along with not being social towards other dogs and humans, veterinarians and dog trainers found these puppies are more likely to have separation anxiety.

And they say it is only going to get worse.

William ‘Blue’ Brawner, owner of PetVet Animal Health Center in Auburn, Alabama, said: ‘We are seeing an uptick in pets having issues with separation as owners return to their regular schedules.

‘These are dogs that have never been left alone all day. They’ve been fine up to this point. But as a lot of owners return to normal routines, we are seeing more dogs that have trouble adjusting to that. This is an area where I think the pandemic has highlighted an already existing problem.’

Some owners are back pedaling on their decision of adopting a pandemic puppy.

The American Kennel Club estimates that 73 percent of first-time dog owners who adopted a puppy during the pandemic have at least considered rehoming them or turning them in to a shelter.

A genetic analysis of the world’s oldest known dog remains revealed that dogs were domesticated in a single event by humans living in Eurasia, around 20,000 to 40,000 years ago.

Dr Krishna Veeramah, an assistant professor in evolution at Stony Brook University, told MailOnline: ‘The process of dog domestication would have been a very complex process, involving a number of generations where signature dog traits evolved gradually.

‘The current hypothesis is that the domestication of dogs likely arose passively, with a population of wolves somewhere in the world living on the outskirts of hunter-gatherer camps feeding off refuse created by the humans.

‘Those wolves that were tamer and less aggressive would have been more successful at this, and while the humans did not initially gain any kind of benefit from this process, over time they would have developed some kind of symbiotic [mutually beneficial] relationship with these animals, eventually evolving into the dogs we see today.’