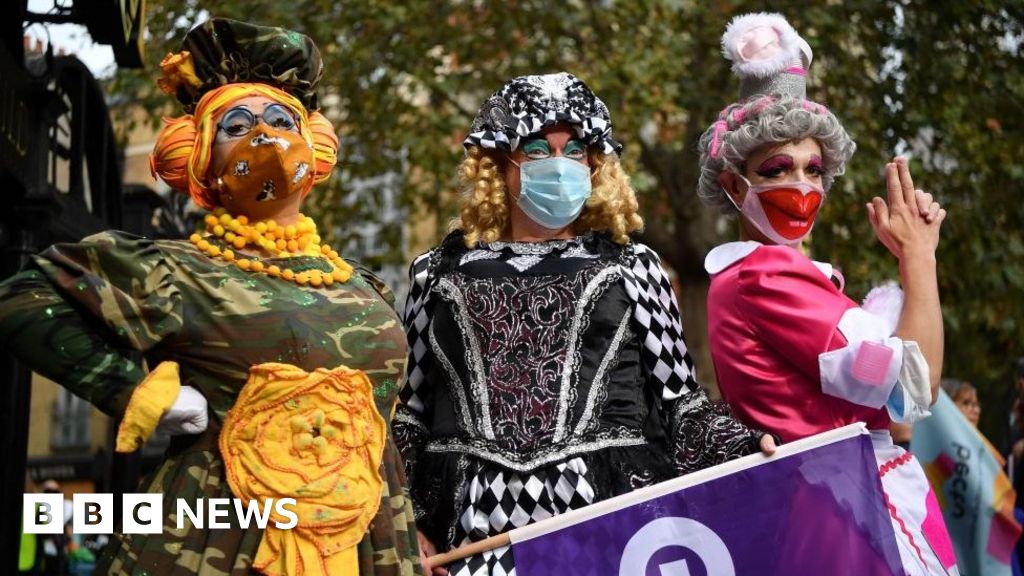 Dozens of pantomime dames have marched on Westminster, as part of a day of action highlighting the plight of the live events industry.

The parade was organised after the rise in coronavirus cases prompted the cancellation of the 2020 panto season.

The impact “will ripple through the entire theatre industry for a generation,” said actor Gary Bridgens.

Organisers are calling for an extension to the government’s furlough scheme for theatre workers.

“If the Government don’t support theatre in its hour of need, there won’t be any – or worse, it will all need rebuilding after this disaster,” said Mr Bridgens, who normally performs in pantomime, under the stage name Gacko, every year.

The protest in London coincided with a day of global events reflecting the issues facing the live event industry.

Under the slogan “red alert”, the #WeMakeEvents campaign will see venues in 25 countries bathed in red light, to draw attention to the continued uncertainty over when concerts and shows can resume; and the precarious position actors, musicians and crew find themselves in.

Pre-empting Wednesday’s day of action, hundreds of people who normally work at concerts, festivals and theatres gathered in Parliament Square on Tuesday to hold a 30 minute silent protest at the government’s handling of the situation.

While venues have been allowed to reopen with social distancing measures in place, there are scarcely any plays or concerts taking place compared with the start of 2020.

Some musicians have already started cancelling shows planned for 2021 – and that has a knock-on effect on crew and support staff.

“We’re aware of around 6,000 redundancies at the moment, but I think that’s just the tip of the iceberg because also many people have been laid off,” said Philippa Childs of the entertainment workers union, Bectu.

The #WeMakeEventscampaign is calling for the introduction of a government-backed insurance scheme, which would ensure that organisers can recover costs if concerts are cancelled due to a local lockdown.

Organisers also want government support for a Covid-19 testing scheme at venues; and a three-year extension on the reduced VAT rate on tickets.

In common with the “Panto Parade”, they are also calling for a job support scheme that is specifically tailored to the live events industry.

‘An industry in crisis’

The campaign has won the support of Glastonbury organiser Emily Eavis, who said “tens of thousands” of people who work in the industry were currently out of work, with many receiving no financial support.

“We are part of a UK creative industry which contributes over £100 billion to the economy each year and which puts this country on the map,” she wrote in a statement which was published on social media.

“But as it stands, there is no sign of the live events industry returning in the coming months. We are an industry in crisis.

“If we don’t speak up, many theatre companies, venues, promoters, artists and crew could struggle to such an extent that this industry is simply never able to return to the incredible force it was before this pandemic struck.”

Although the government announced a £1.57 billion rescue package for the arts in July, it is going principally to museums, galleries and venues, rather than individuals. Many of those who work in the sector have not been covered by either the self-employed initiative or the furlough scheme.

The #WeMakeEvents campaign estimates that the live event industry is currently operating at between 1-5% of normal capacity, ruling it out of contention.

“Our furlough ends next month and we don’t know when we’re going to go back to work because apparently we’re unviable,” said Zoe Gale, a wigs, hair and make-up artist who has worked on West End productions of Hamilton, Dirty Dancing and Motown: The Musical.

Last week, the Musicians’ Union said one third of its members were considering giving up their careers due to the impact of the coronavirus pandemic.

A survey of 2,000 members found that 34% were “considering abandoning the industry completely”, because of the financial difficulties they faced, while almost half had already found work outside the industry.

Veterans Day 2020: Clint Eastwood, Elvis Presley, other stars who served in the military