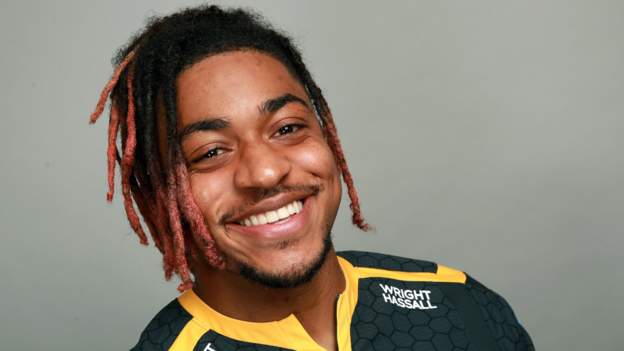 
Rugby is a game for all shapes and sizes. That’s what they say.

If so, it was ill-prepared for Paolo Odogwu’s skillset.

Midway through his rugby debut, even the referee was questioning that tactic.

“I scored a 60-metre try and the referee was like ‘you’re too fast to be a prop’, and I was like ‘I don’t really know what a prop is’ to be honest,” Odogwu told the Coventry Telegraph in December.

Fortunately he never really had to learn.

Odogwu’s skills soon saw him shifted from number eight to centre to wing and finally back into midfield and a place in the England squad for Six Nations.

It is reward for a stellar start to the season with Wasps.

An injury to former all Black Malakai Fekitoa opened a door and Odogwu has barged through into the limelight.

The 23-year-old, who also qualifies for Italy and Nigeria, has scored six tries in eight games and leads the Premiership in defenders beaten and metres made.

Such stats seem almost inevitable when you see him play. Built like a bowling ball, but zipping about like a pinball, he can hurt defences in a number of ways.

He cleverly winkles out gaps in broken-field defences and has the blurring speed to drive through them.

His most recent appearance was in the sort of game he relishes.

Wasps beat Bath in a 52-44 full-throttle barnburner. Odogwu scored two tries, left Jonathan Joseph on the seat of his pants to set up a third and shrugged off Sam Underhill – England’s most effective tackler – on another burst.

“I didn’t know he was there,” said Odogwu afterwards of England coach Eddie Jones’ presence at the Rec.

Jones seems to have done so. In a Six Nations squad cut down to 28 men by Covid precautions, the Australian, often unswayed by sudden bursts of Premiership form, has found room for a player who was barely on his radar a year ago.

Odogwu made only eight try-less appearances for Wasps in 2019-20. The few headlines were for a red card.

In the last minute of a game against Sale, he went up for a high ball and caught Rohan Janse van Rensburg in the face with his outstretched foot.

The aftermath and Odogwu’s reflections on it, his sport and society in general show a man who thinks deeply and speaks clearly.

Odogwu reacted with obvious shock to referee Tom Foley’s decision, shaking his head and applauding, apparently sarcastically, as he walked off.

He apologised on social media afterwards, but the venom he received made him question if rugby is as welcoming, accepting and understanding as it sometimes claims.

“It’s an emotional, professional game, but if I show anything besides being stone-faced, shake hands and run off…,” he told The XV.

Odogwu, who grew up idolising Nigerian football legend Jay-Jay Okocha, does show himself. He personalises his boots with drawings of wrestlers and superheroes. He dyes his dreadlocks. Asked what he might be if he weren’t a rugby player, he lists fashion designer as a possible career path.

“That’s something that has bothered me for a while because the whole selling point of rugby is that it’s a game for everyone, it’s really inclusive,” he added.

“When you actually look at it, they expect everyone to act in the same way.

“I came through the Leicester Tigers academy and you had to fit a certain mould, it was drill-sergeant kind of vibes.

“In a lot of English teams, you barely see people smiling.”

If Odogwu can add the glitter to the truckload of grit in Jones’ side, there will be a few more grins on English faces.

Jack Willis: England flanker set for ‘up to a year’ out after knee surgery