Parents are divided over this mum’s school lunchbox for her eight-year-old daughter – so what do YOU think?

Parents have been left divided after a mum shared a photo of the lunchbox she gives her eight-year-old child, as while some think it looks healthy, others believe there aren’t enough vegetables.

The Australian woman, called Stacey, posted on Facebook, where she shared the photo and said the reason why she gives her daughter these foods is because she ‘struggles to get her to eat anything other than what’s pictured’.

‘I’d love for her to enjoy a wider variety of fruits and vegetables such as cucumber, capsicums or celery,’ Stacey posted.

‘Does anyone have any ideas or recipes they’d be happy to share?’ 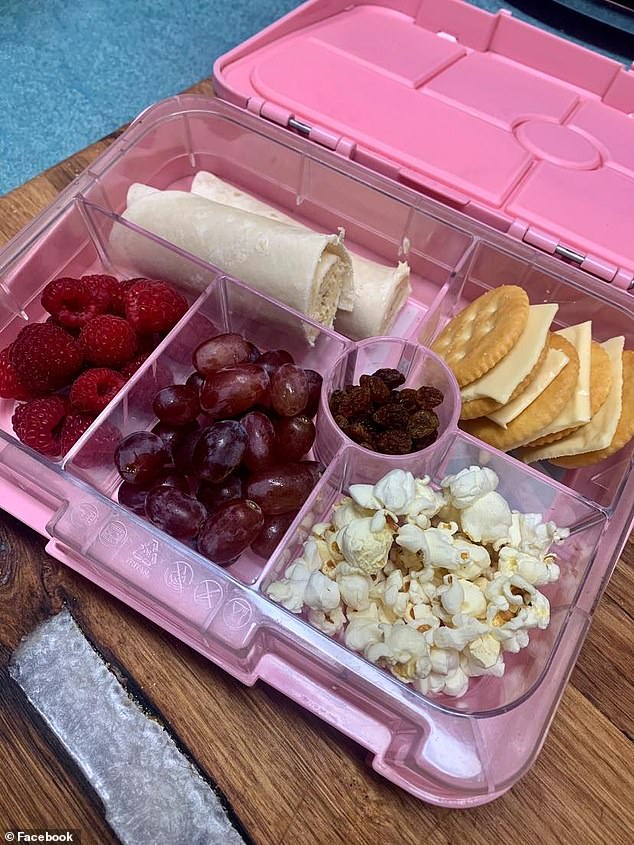 Parents have been left divided after a mum shared a photo of the lunchbox she gives her eight-year-old child (pictured), with some saying there aren’t any vegetables

Many were quick to say the lunchbox isn’t all that unhealthy, and they would be happy if their child ate the likes of raspberry, grapes and raisins.

‘Wow – to be honest that’s more variety than my eight-year-old eats,’ one mum wrote.

‘That’s great to give her exactly what she eats, at least she’ll eat it,’ another added.

Do you think the lunchbox is healthy?

Others criticised the fact that there aren’t any vegetables in the midday meal:

‘Maybe try adding veggies – carrot or celery sticks and hummus or corn fritters, which you can cook and freeze,’ one parent wrote.

Another added: ‘I convinced my kids to start eating veggies by talking about what they do for your body.

‘Now, when there is a new veggie on her plate the first question is “how does it help my body?” I just need to make sure my phone is with me so I can do a quick Google.’

Some made useful suggestions like hiding vegetables in muffins or scrolls, so her daughter doesn’t know when she’s eating something she doesn’t like.

‘I’d start by just throwing one single piece of veg in there,’ another added.

‘My three-year-old eats cucumber and tomatoes, but is not a fan of carrots. So I just throw one or two carrot sticks into his lunchbox.’

She continued: ‘Sometimes he has a nibble and spits it out. But my theory is they will never eat it unless they are constantly exposed to it.’

Susie’s formula means you should always ensure you have a sandwich, wrap or salad with protein in their box, as well as fruit and veggies, a protein-rich snack and one ‘fun and yummy item’.

Italian hermit on island alone is leaving after 32 years

Silverdale stink: ‘My house and children’s toys all smell of landfill’

Silverdale stink: 'My house and children's toys all smell of landfill'