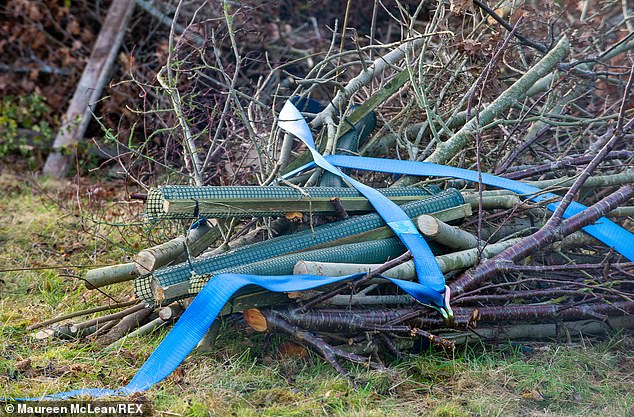 The parents of a young girl whose remembrance tree was torn down to make way for the HS2 rail project have shared their heartbreak over the decision.

Parents Yvonne and Dean were shocked to discover the tree for their 11-year-old daughter Alanya at the Wendover Memorial Woodland in Buckinghamshire had been chopped down for the high speed railway line.

The memorial site was gifted to the charity Iain Rennie Hospice at Home, now Rennie Grove Hospice, ten years ago as a place for grieving families to plant a tree in memory of their loved ones.

Alanya’s mother Yvonne, 46, from Aylesbury, Buckinghamshire, described how she was left ‘broken’ after discovering the tree for her daughter, who was severely disabled from birth and died of a chest infection in 2009, had been cut down.

Alanya’s mother Yvonne, 46, from Aylesbury, Buckinghamshire, said she discovered the tree for daughter had been cut down when she visited the site on the anniversary of her death

Yvonne, who made the discovery as she visited the site on the anniversary of Alanya’s death, also said the memorial stone for her daughter had been removed.

She told The Mirror: ‘The trees were carelessly thrown into a pile. My heart is broken. I felt like I lost her all over again.’

Meanwhile Alanya’s father Dean, 52, from Chorleywood, Hertfordshire, told Yahoo News UK: ‘It really is the lowest of the low to desecrate a memorial to dead children. Of all the things that anyone could do, that’s the very worst.

‘If HS2 needed to use the site, they could have dealt with the matter sensitively, making sure that the families of the children whose memorials were there, were given the opportunity to dig up their trees and remove their memorial stones.’

In a statement Rennie Grove Hospice Care said they had written to every family recorded as having a tree in the woodland prior to their removal but later discovered one family did not receive their letter.

The charity said: ‘The agreed route for HS2 will run nearby and in order to construct this section, known as the Wendover Green Tunnel, HS2 has taken possession of the land on which the Memorial Woodland is located for a period of five years to create access to the construction site.

‘This has resulted in a number of the trees in one section of the Memorial Woodland being cut down.

‘Rennie Grove Hospice Care and the landowner have been in negotiations with HS2 for over a year trying to secure the best possible outcome for the woodland and for the families whose loved ones are remembered there.

‘These negotiations have yet to reach a conclusion, and are still ongoing, but the charity remains hopeful that an agreement will be reached for HS2 to provide financial compensation to restore the woodland to its former state at the end of the five year period.

‘Rennie Grove Hospice Care and the landowner were given a month’s notice of HS2’s intention to take possession of the land on 20 October 2020. Rennie Grove wrote to every family recorded as having a tree in the woodland to let them know that the area would be out of bounds after this date.

‘The charity has since become aware of one family who did not receive their letter and who subsequently visited the woodland to find the tree planted in memory of their daughter and a memorial stone they had also placed by it were no longer there.

‘Rennie Grove fully appreciates how upsetting this situation is and has spoken to the family concerned to reassure them that it is doing all it can to reach a satisfactory conclusion to restore the woodland once construction has been completed.

‘It continues to work tirelessly on behalf of all the families who have trees in the Woodland to secure the restoration of the area for them, their loved ones and the local community to use as a place of remembrance and reflection.’

Last month ministers were told that Phase One of controversial rail line HS2 could cost £800million more than planned.

It came just six months after a budget increase saw total predicted costs for the first stage of the high-speed line soar by £20.6billion to £43billion.

In a written statement to Parliament, HS2 Minister Andrew Stephenson said half of the figure was due to preparation of the route for construction involving ‘more significant challenges than anticipated’.