The family of TikTok star Miranda Derrick believes their daughter has been taken in by a cult in Los Angeles run by a pastor accused of stealing millions from at least one member.

Melanie Wilking and her parents, Kelly and Dean Wilking, say that they have not been able to speak to Miranda since January 2021 after she refused to go to her grandfather’s funeral in a now-viral Instagram video.

‘It’s been haunting us for over a year now,’ Melanie said on the video, which they dated February 24. ‘It’s definitely been the hardest year of my life.’

‘You don’t need to cut us off. Life is going on and there are so many exciting things going on,’ Melanie added.

They said that Miranda, 24, left last year to join an entertainment management company called 7M Films, which has ties to a church called Shekinah Church and a sect of Christianity known as the Seven Mountain Mandate, according to Gawker. The Wilkings believe the sect targets dancers like Melanie. 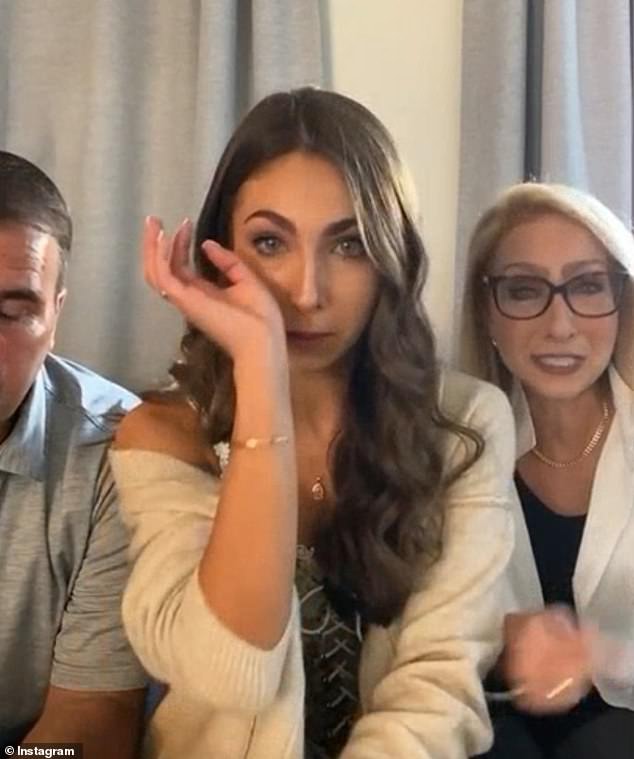 Melanie Wilking and her parents, Kelly and Dean Wilking, say that they have not been able to speak to Miranda since January 2021 after she refused to go to her grandfather’s funeral in a now viral Instagram video 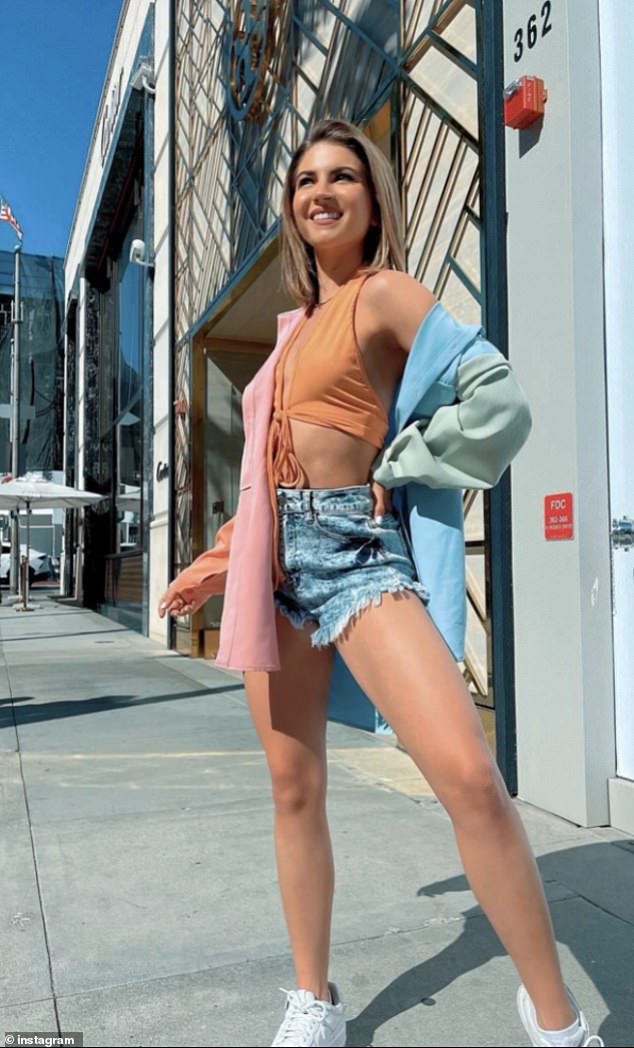 TikTok star Miranda Derrick, 24, is believed by her family to have been taken in by a religious cult

The Seven Mountain Mandate comes from a reading of Bible verse Isaiah 2:2, from which ‘a group of self-proclaimed ‘apostles’ have a plan rooted in biblical prophecy to ‘invade’ every sphere of life as we know it.’

Followers of the mandate focus on education, religion, family, business, government, entertainment, and media; they argue they must rid those institutions of demons and witchcraft.

The principles are followed by several Christians, including prominent Trump-affiliated pastor Paula White.

Shekinah Pastor Robert Israel Shinn – whose son Isaiah is a director and choreographer for 7M – teaches a belief about prepping for the apocalypse and owns several companies, including a production group that made a film starring Meghan Markle.

He has been sued in the past by former member Lydia Chung, who in 2009 claimed that Shinn had taken her from her family, brainwashed her and defrauded her out of almost $4million, allegedly sent straight to Shinn through church which does not pay taxes.

A judge ruled in Shinn’s favor in May 2011, but Chung remains insistent that Shinn is running something sinister .

‘This is a cult,’ she said. ‘This totally ruins people. You hear about the people who went to Vietnam – going through such a trauma, many people cannot function as a normal human being – this is what it does.’

A representative for Shekinah Church and 7M Films denied to The Daily Beast they were affiliated with the Seven Mountain Mandate, saying the M stands for ‘Millenium.’ 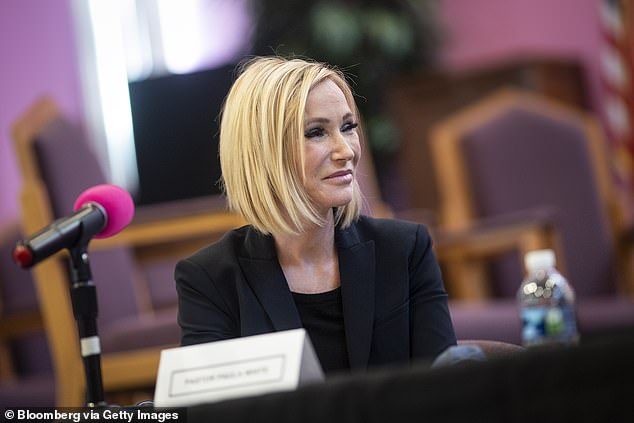 Pastor Paula White, an advisor to the Trump White House, is a believer in the Seven Mountain Mandate

Melanie, Miranda’s sister, used a TikTok video of Miranda to spread the word about what she believes happened.

In the video, Melanie claims Miranda has ‘no control over her social media’ and that the church has control over Miranda’s finances.

Both Miranda and her now-husband James Derrick responded to the allegations on Instagram, with Miranda saying that Melanie kicked her out of their shared TikTok account and stopped speaking to her family because she said they called the cops once on James, who is black, when she moved in with him.

‘I can speak for James and our friends who are in 7M that they DO speak to their families (so what you guys have heard about 7M dancers not speaking to their families is a complete lie). It’s just a unique situation with my family,’ she wrote.

James has also personally argued in his own posts that the family doesn’t like him because he’s a ‘black man from Compton’ who is divorced with a son, had no car and was living in a rented room. 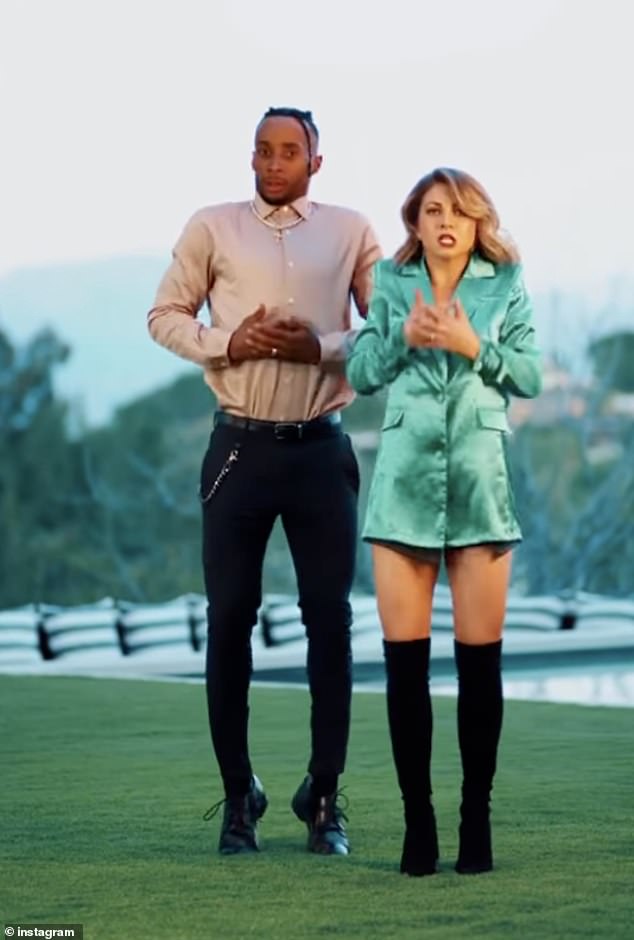 Miranda Derrick seen in a video with her now-husband James, both of whom claim Miranda’s family doesn’t approve of 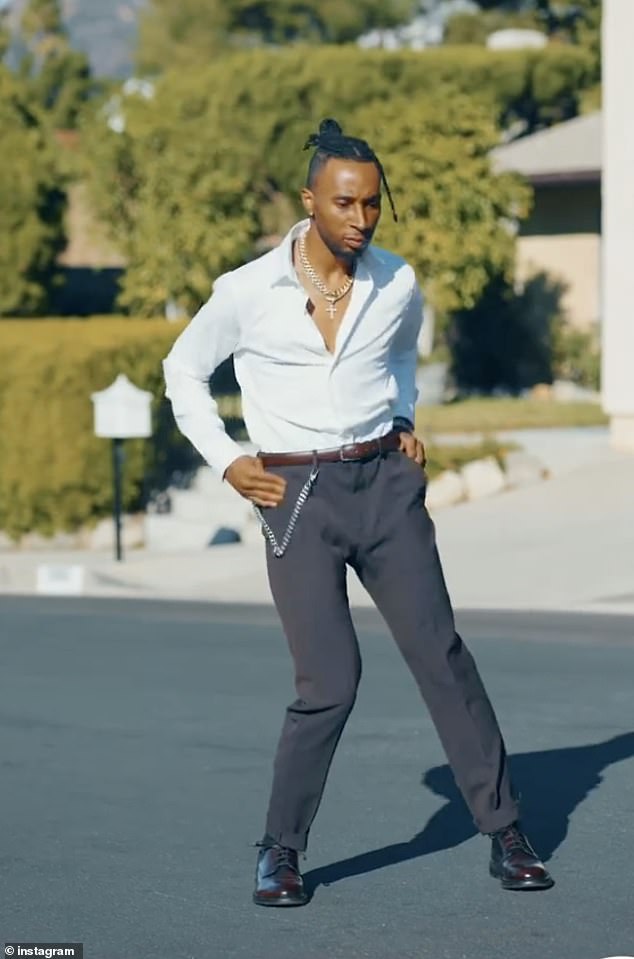 James and Miranda have both alleged that Miranda’s family dislikes him because he is black, though the family denies it and points out that Miranda’s sister is also dating a black man 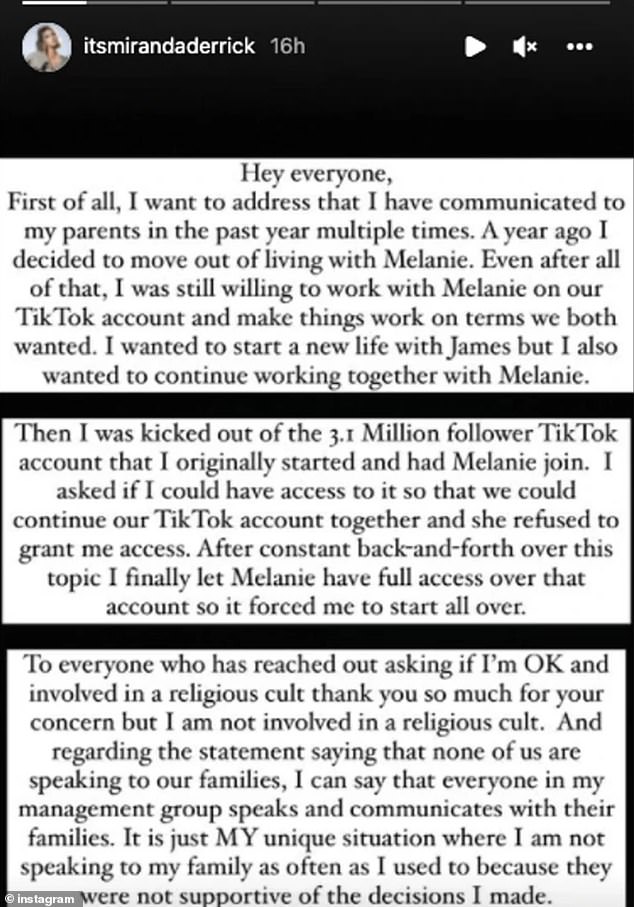 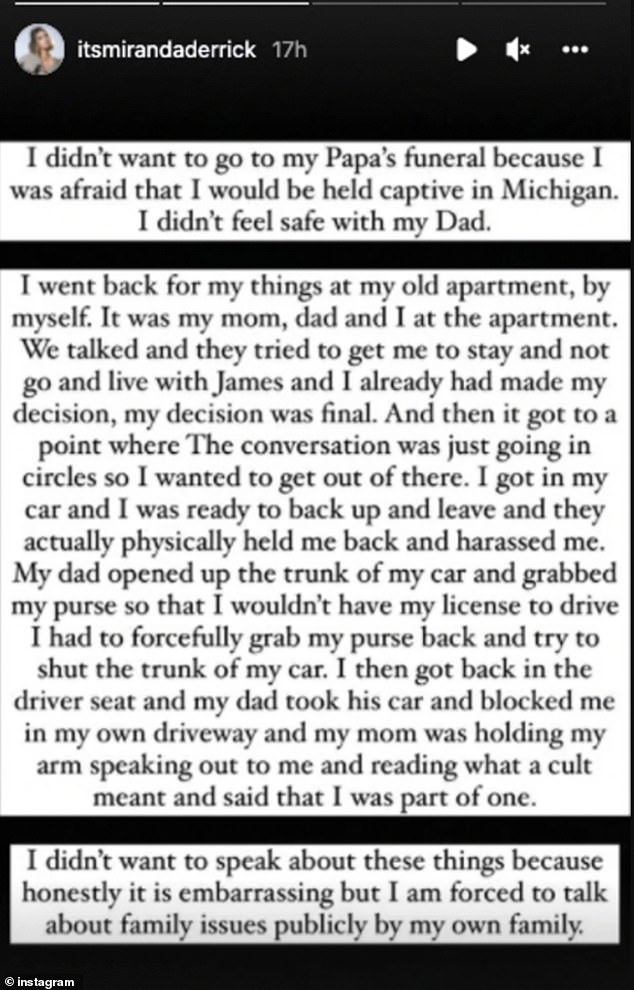 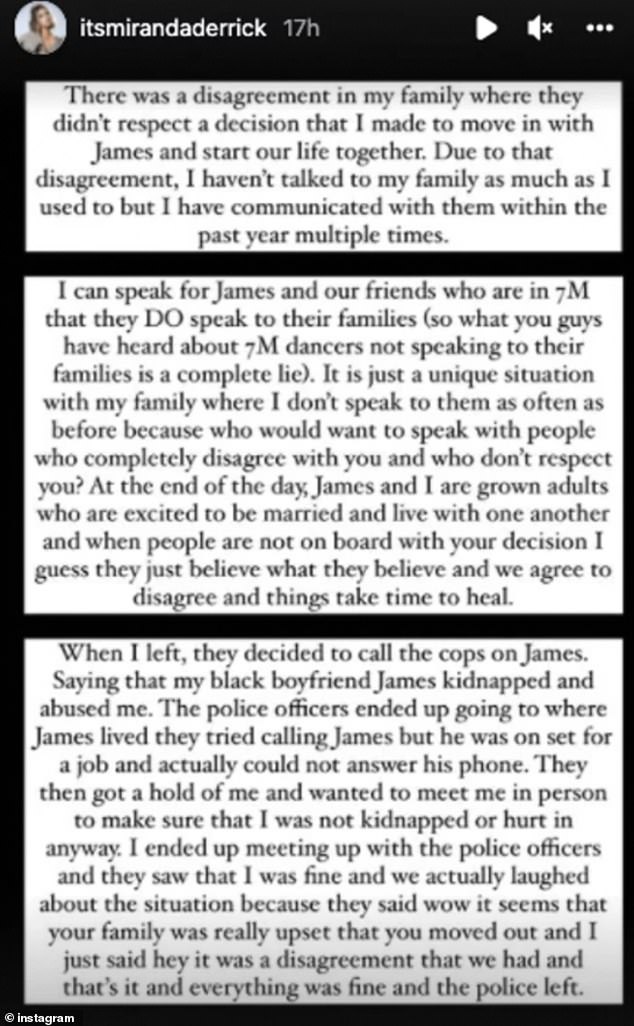 He credits 7M with leading to his own personal success ‘in a matter of months’ and argues it’s not a church but a ‘secular for-profit company run by people who have faith in God.’

The family has refuted any claims of disliking James for reasons of race, noting that Miranda’s sister Melanie is herself dating a black man.

The Michigan-born Wilkings sisters started their online dancing careers as a duo.

The two sisters posted videos of the latest TikTok trends and gained more than 3 million followers after shooting to social media stardom in 2020.