Parties, pageants and pop concerts and huge Sunday lunch are among events to mark Queen’s 70 years


Flag-waving crowds joyously thronging the streets and full-blown displays of pageantry may seem a distant memory.

But after the dolour of the pandemic and lockdowns, at last the nation is set to come together next year in a great celebration of the Queen’s historic Platinum Jubilee.

It will see everything from glittering royal showpieces to community parties and a star-studded live concert called the Platinum Party at the Palace, it was announced yesterday.

There will also be the Big Jubilee Lunch, a nationwide event that will encourage as many people as possible to have a meal with their neighbours. 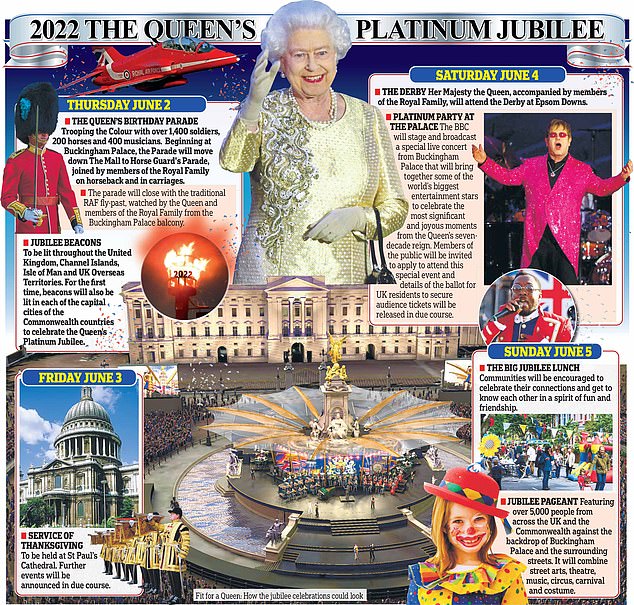 All will take place over an extended four-day bank holiday weekend from Thursday, June 2, to Sunday, June 5, Buckingham Palace said.

In 2022, the Queen will become the first British monarch to celebrate a Platinum Jubilee – reigning for 70 years – having acceded to the throne on February 6, 1952, when she was 25. She will be 96 by the time of the jubilee celebrations.

As with the Queen’s Golden and Diamond Jubilees, the first week in June has been chosen for the celebrations as the summer offers a better chance of good weather than February. It is understood that Harry and Meghan will be included in the celebrations, should they wish to travel over to the UK.

Although they would not undertake any engagements, they would be invited to join the Queen and wider Royal Family on the balcony at Buckingham Palace as part of Trooping the Colour, as well as joining them at the palace concert and pageant. 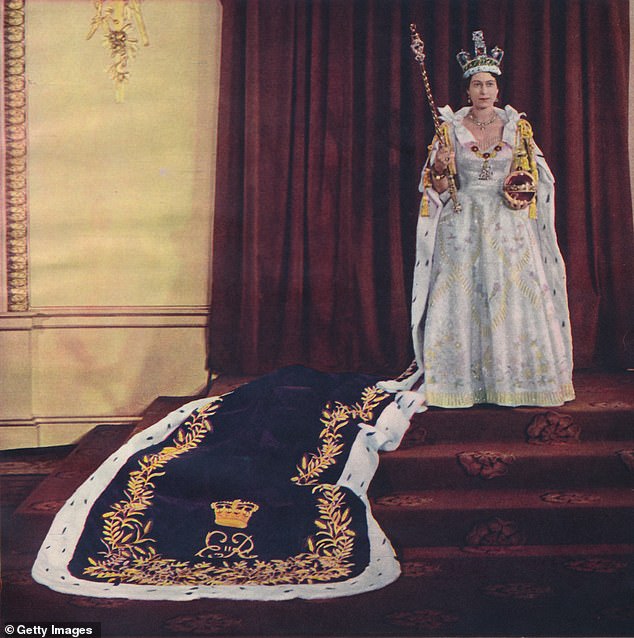 Queen Elizabeth II in her coronation robes in 1953

The Queen has always made clear that the couple are ‘much loved’ members of her family, despite the current rift.

Trooping the Colour will begin the celebrations on June 2, with the event set to return to Horse Guards Parade for the first time since 2019.

Last year it had to be scaled down because of the pandemic and was held at Windsor Castle. The Palace has said this year’s event will not go ahead in its usual form either.

Diana’s dress goes on show for first time since 1996 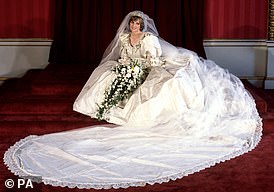 Princess Diana’s wedding dress will go on show from today so fashion fans and royal followers can get a glimpse of the outfit that charmed the nation in 1981.

The dress, complete with its 25ft sequin-encrusted train, will be on public display for the first time in 25 years at Kensington Palace.

It features a fitted bodice overlaid at the centre both front and back with panels of antique lace that had originally belonged to Queen Mary.

Prince William and Prince Harry have loaned the gown to the fashion exhibition, which will run until the new year.

But next year will see a traditional parade to mark the Queen’s official birthday. Beacons will be lit throughout the United Kingdom, Channel Islands, Isle of Man and UK Overseas Territories.

For the first time, beacons will also be lit in each of the capital cities of the Commonwealth.

The following day, a service of thanksgiving for the Queen’s reign will be held at St Paul’s Cathedral. On Saturday, June 4, the public will be invited into Buckingham Palace gardens for the Platinum Party – a televised concert that will bring together ‘some of the world’s biggest entertainment stars’ to celebrate the most significant and joyous moments from the Queen’s seven-decade reign.

Details of the ballot for tickets will be released later.

The following day, a pageant featuring more than 5,000 people from across the UK and Commonwealth will take place against the backdrop of Buckingham Palace and surrounding streets.

Combining street arts, theatre, music, circus, carnival and costume, it will celebrate the service of Her Majesty’s reign, as well as honouring the collective service of citizens and communities across the country.

Community spirit will also be bolstered by the Big Jubilee Lunch, whether it is in the form of a street party, picnic, barbecue or traditional Sunday roast.

People are invited to share friendship, food and fun with neighbours as part of the celebrations, the Palace said.

The Queen, an avid horse owner and racegoer, will attend the Epsom Derby on Saturday, June 4, accompanied by members of the Royal Family.

There will also be year-long celebrations throughout the UK, the Commonwealth and around the world as communities and people come together to celebrate Her Majesty’s historic reign.

The Queen and other members of the Royal Family will travel the country taking part in engagements to mark the occasion – but the focal point will be the special June weekend, with the Thursday and Friday being bank holidays.

Culture Secretary Oliver Dowden said: ‘The Platinum Jubilee will be a historic moment for the Queen and the Commonwealth.

‘It’s the perfect opportunity to give thanks to Her Majesty for seven decades of unwavering public service. After an incredibly difficult year, it’s a fantastic opportunity to bring communities together, boost tourism and give the country a much needed lift.’

Details of a special Jubilee emblem competition will be released this month. The winning entry will become the official emblem for the celebrations.

Opinion: NFL should apologize for using disgraceful practice of race-norming

How to prepare for your first marathon

Samuel Paty: A murder showing the cracks in European society

Andrew Neil is a man on a crusade – to cancel the ‘cancel culture’ he believes...