Passengers on Ryanair flight prayed as the cabin filled with smoke


‘Better than Alton Towers’: Passengers on Ryanair flight that made an emergency landing in France after plunging 35,000ft in seven minutes prayed as the cabin filled with smoke

Passengers on a Ryanair flight that made an emergency landing in France after plunging 35,000ft in seven minutes prayed as the cabin filled with smoke.

Flight FR4052 took off from Manchester at 6.33pm on Monday headed for Faro, southern Portugal, where it was expected to land at around 9.30pm.

But just over an hour into the flight, pilots of the Boeing 737-8AS aircraft made a sudden descent from 41,000ft to 7,000 ft while over the English Channel.

Those onboard joked the experience was ‘better than a ride at Alton Towers’ after they were safely back on land in Brest, northern France.

The plane made the emergency landing shortly after 7.30pm and was met on the tarmac by fire trucks and police vehicles as passengers were evacuated.

Despite France’s strict Covid quarantine rules for arriving Britons, the passengers were allowed to board another plane shortly after and continued to Portugal. 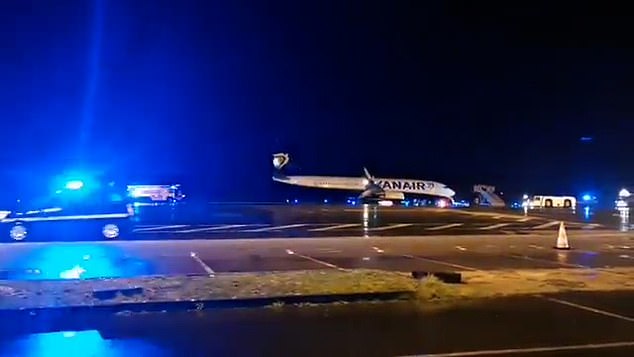 Flight tracking software suggested that the plane engaged in an extremely rapid descend from 41,000ft to 6,725ft in seven minutes between 7.14 to 7.21pm, sparking concerns that there could have been a loss of cabin pressure

Patricia Smith, was one of the few people on board the flight last night.

She said that she ‘said the Lord’s prayer’ during the emergency landing, which according to flight analysis sites saw it drop thousands of feet within minutes.

She said: ‘The crew were first class. The pilots remained totally calm issuing very clear instructions on procedures and the brace position.

‘All of the passengers stayed calm although I did recite the Lord’s Prayer as we started to plummet to land.

‘Nobody moved. We all sat practising the brace position. It sounds odd, but you could have heard a pin drop.

‘It was a very frightening experience but passengers afterwards remained calm and joked with each other.

‘There was the British spirit once we had made the fast decent. People joked ‘get that bar open’ and that it had been ‘better than the black hole ride at Alton Towers’.

‘Thankfully there was no young children who would have been terrified as I was. The Ryanair crew were a credit to the Aviation industry.’ 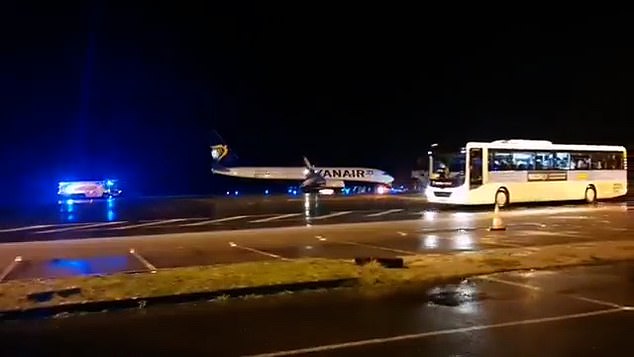 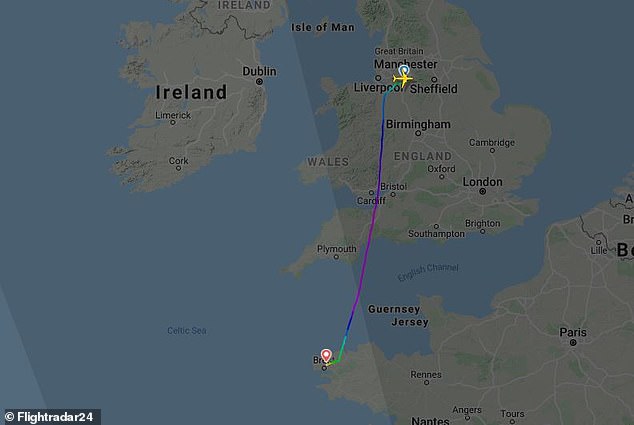 Flight FR4052 took off from Manchester on Monday at 6.33pm and was headed for Faro, Portugal, where it was expected to land at around 9.30pm. Flightradar’s flight tracker shows the plane made an unscheduled stop in Brest, France

The pilots initiated the dive of 35,000ft after a fire broke out inside the aircraft, according to plane spotters in France.

Following its landing, travellers sat for 15 to 20 minutes before they were taken into the airport and handed food in a box.

And within three hours, they had been moved onto a replacement London flight to Faro to meet their final destination.

The Boeing 737 aircraft was pictured on the runway with fire crews in attendance after it landed shortly after 8.30pm.

Ryanair has since confirmed that a technical fault caused smoke in the cabin.

A Ryanair spokesperson said: ‘This flight from Manchester to Faro, Jan 3, diverted to Brest Airport as a precaution due to a minor technical issue which caused an unidentified smoke smell in the cabin.

‘Passengers disembarked the aircraft as normal and were taken to a secure area in Brest airport where they were provided with refreshments.’

Whoopi Goldberg is infected with covid-19

AVROBIO down 30% as it reprioritizes pipeline programs

AVROBIO down 30% as it reprioritizes pipeline programs