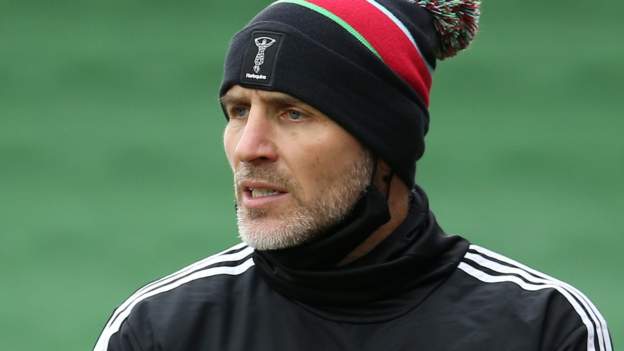 The 44-year-old joined Quins in the summer of 2018, having previously been England’s defence coach, and has departed ‘to enable him to pursue other opportunities’, a club statement said.

Gustard led Harlequins to a fifth-placed finish in his first season in charge and sixth place last term.

Quins are seventh in the Premiership with two wins from six games.

“The club thanks Paul for his tireless energy and commitment over the last two and a half years,” the Harlequins statement read.

“His passion and drive to succeed have been evident throughout his time at the club. Everyone at Harlequins wishes Paul and his family all the very best for the future.”

Millard spent four years running Australia’s sevens team and was also head coach at the Melbourne Rebels, as well as being backs coach with Cardiff Blues, Connacht and the USA national team.

Gustard was a decorated player, winning four Premiership titles and a Heineken Cup in a five-year spell at Leicester from 1997 to 2002 before spending five years at London Irish and two seasons at Saracens.

He joined the Saracens coaching team in 2008 and was the club’s defence coach until 2016 – a period which saw Saracens win three Premiership titles and a European Champions Cup – before Eddie Jones brought him into his England coaching set-up.

Under Gustard’s leadership, Harlequins were runners-up in last season’s Premiership Cup, losing to Sale in the final, and made the semi-finals of the 2018-19 European Challenge Cup.

But in the Premiership the club lost more games than they won in both of Gustard’s full seasons in charge, although they improved on the 10th-placed finish the club experienced the season before he took over.

Gustard arrived at Quins in 2018 to much fanfare, a defence coach with a strong track record getting his deserved shot at being the top man, even foregoing the experiences of a Rugby World Cup to move to The Stoop.

It is the second Quins coaching ticket in under three years that has disbanded prematurely, for which both the board and the players must take some responsibility, and now the pressure is on to get the next appointment right otherwise the club could end up languishing at the wrong end of the Premiership table.

An Early Build of Zelda: Ocarina of Time Has Been Found, in Which Link Could Turn Into Navi