Topofthegame remains on target to return to action in the Ladbrokes Trophy at Newbury on November 28.

Paul Nicholls’ charge won the RSA Chase at the 2019 Cheltenham Festival before finishing second at Aintree in April that year, but he missed last term after sustaining a leg injury.

Despite the financial constraints currently prevalent due to the pandemic, the race is being run at a value of £200,000 and 39 horses have been entered. 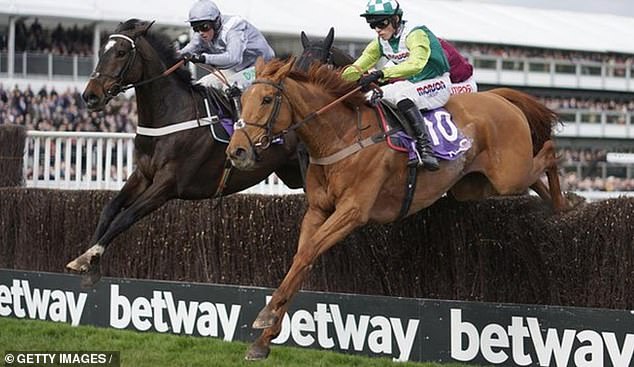 ‘We remain on target with Topofthegame, with the plan to go straight for the Ladbrokes Trophy,’ said Nicholls.

‘We’ll probably take advantage of the invitation to gallop him at Newbury in mid-November as part of their official gallops morning.

‘The prize-money on offer for the big race and across the two days is very good considering the current climate.’

Last year’s winner De Rasher Counter, trained by Emma Lavelle, will be aiming to become the first back-to-back winner of the race since Arkle.

‘De Rasher had a nice warm-up when coming second off top weight in a handicap hurdle at Newton Abbot a couple of weeks ago, which was a little earlier than we had originally planned,’ said Lavelle.

‘The whole weekend last year was quite amazing and all being well, both horses will be back defending their titles in just a few weeks’ time.’

Colin Tizzard’s Copperhead is second favourite behind Topofthegame, who heads the sponsor’s betting at 5-1.

Kim Bailey’s pair of Imperial Aura and Vinndication are prominent with The Conditional, Black Op and Kildisart others to note. There are no Irish-trained entries for the race.

Meanwhile, Latest Exhibition looked an exciting staying prospect when making a successful debut over fences in the Bet 10 Get 10 Betdaq Virtuals Beginners Chase at Punchestown on Wednesday.

A Grade One-winning novice hurdler and runner-up in the Albert Bartlett on his final start last term, Paul Nolan’s seven-year-old promises to go a long way over the bigger obstacles.

His jumping may have been sketchy in the early stages, but Latest Exhibition warmed to the task as the race developed.

Taking closer order after four out under Bryan Cooper, the 6-5 favourite led approaching the final fence and went on to beat School Boy Hours by two lengths.

The winner appeared to interfere with the second on the run-in, but the places were allowed to stand following a stewards’ inquiry.

‘I’m relieved. It’s our best horse and I wasn’t nervous about winning, I was nervous about a clean, safe round of jumping,’ said James Nolan, assistant to his brother.

‘Bryan had been thrilled with his schooling at home and said he jumps like a two-miler and is very fast through the air. It didn’t suit early in the race that it was a bit like a handicap and Bryan just started schooling him then.

‘He was delighted with him thereafter and to be honest, if he went around with an ass he’d only just do that and only does what he has to.’

The Grade Two Florida Pearl Chase back at Punchestown next month could be Latest Exhibition’s next port of call.

‘We’ll be trying to avoid Envoi Allen and he might come back here in 18 days’ time for the Florida Pearl Chase,’ said Nolan.

Latest Exhibition was cut to 10-1 from 14s for the RSA Chase at the Cheltenham Festival.