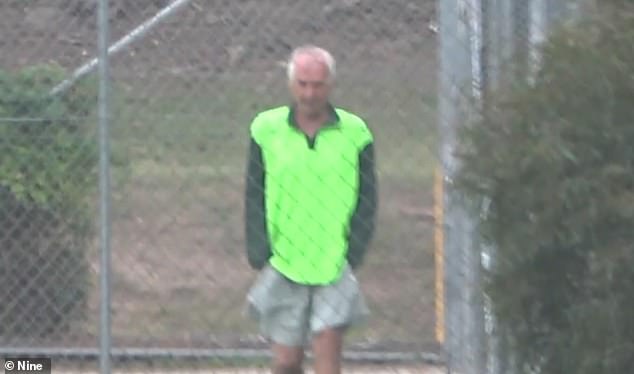 A man who terrified a teenage girl for 10 hours straight after strapping a collar bomb around her neck is expected to be freed from prison after a decade behind bars.

Paul Douglas Peters was sentenced to 13 years in jail with a non-parole period of 10 years after he broke into the $15million family home of Maddie Pulver in Mosman, on  Sydney’s north shore, in August 2011 as she was studying for the HSC.

He then put the collar bomb – which was later found to be a fake – around the neck of Maddie, who was 17 at the time, with a letter demanding cash from her parents, former Australian Rugby Union boss Bill Pulver and his wife Belinda.

Peters was arrested in Louisville, Kentucky, in the US, two weeks later at his ex-wife’s place after fleeing Australia and sparking an international manhunt.

He was extradited back to Australia where he pleaded guilty and is currently serving out his sentence at the Cooma Correctional Centre in the NSW Snowy Mountains.

Peters put a collar bomb around the neck of Maddie Pulver (centre) while he demanded cash from her parents Bill (left) and Belinda (right). They are pictured leaving Sydney’s Downing Centre court in 2012

The now 60-year-old’s earliest possible release date from prison is August 14, if he is granted parole by the NSW Parole Authority.

A Current Affair revealed on Monday Peters had taken the initial steps to freedom after he was granted work release from jail for at least two days a week, with the possibility of day and weekend leave in the coming weeks.

Peters, a former lawyer and investment banker, was recently spotted wearing hi-vis attire as he headed from prison to his work at a local transport company.

He has also been seen walking around the grounds of the Cooma jail, where he is classified as a minimum security prisoner, and playing with the prison dog.

Peters will need to complete prison reform and work and day release programs before his case can come before the parole authority.

‘It’s 10 years that he’s been in custody now. In my mind, in this case, justice has been done,’ Detective Luke Moore, who ran the police investigation on the day the collar bomb was placed around Maddie’s neck, told A Current Affair.

‘I’m sure he’s reflected, I would hope, during his time in custody on what he’s done and the pain and anguish that he caused Madeleine and her entire family.

‘It would have just been every parent’s worst nightmare.’

Peters (left) was arrested in Louisville, Kentucky, in the US, two weeks after placing the collar bomb around Maddie’s neck at her home in Mosman, Sydney’s north shore

Maddie had the collar bomb, which was later discovered to be a fake, around her neck for an agonising 10 hours. Pictured, police at the scene in Mosman in August, 2011

Det. Moore was provided with photos from officers at the scene as the horrific incident unfolded.

‘I will never forget one photo in particular of Maddie, she’s holding the device and the absolute terror and fear that was on her face,’ he said.

Ms Cunneen, who was recently been in contact with the Pulver family, said they wished to not be defined by the collar bomb ordeal.

‘They don’t want this matter to define them or to be affected anymore by anything to do with Paul Peters. It just doesn’t concern them and that’s a very healthy attitude,’ she said.

Peters told a psychiatrist during court proceedings that he had no memory of the crime but suggested he had taken on the persona of a character in a book he was writing.

Peters (pictured) was arrested two weeks later hiding out in America and sentenced to 13 years in prison for the crime, with a non-parole period of 10 years

The court heard Peters started to morph himself into his protagonist John Chan, and he was looking for ‘dual revenge for Chan and for me’, but it was a defence the judge said he was ‘not prepared to accept’.

During sentencing, Judge Peter Zahra said: ‘The offender placed the victim in fear that she was going to die in order to extort money from her family.

‘The victim was vulnerable, being entitled to the sanctuary of her own home… the terror she experienced can only be described as unimaginable.’

Speaking outside the court after sentencing, Maddie said she was pleased with the result and hoped that she and her family could look to a future ‘where Paul Peters’ name is not linked with mine.’

Her father said: ‘She’s a very, very special young lady who has handled herself with incredible poise and dignity throughout this trial.’

Maddie was studying for the HSC in the bedroom when Peters, clad in a balaclava, broke into her family home

In October, 2019 NSW Police released details of the traumatising ordeal, including how Maddie was forced to call her parents to tell them she was being held hostage.

‘Madeleine Pulver, 17, contacted her parents by mobile phone asking them to contact police and send them to their home address urgently,’ a dispatch note written by an officer at the time read.

‘Police from the Harbourside LAC responded and located the victim in her bedroom with what she described as a bomb locked around her neck.’

The Harbourside Local Area Command officers described the teen as ‘distraught’ at the time. She was convinced she was going to die.

Maddie was able to tell officers that a man wearing a balaclava and carrying a baseball bat entered her home and told her she wouldn’t be hurt as long as her parents followed instructions.

‘A plastic sleeve was attached to the lanyard which held a two page document outlining extortion demands and instructions,’ police documents read.

A X-Ray taken of the collar bomb in 2011 showed how intricate the device was. Police were initially not certain about its authenticity

In October, 2019, NSW Police released a photo of the touch pad device (pictured) which was strapped to Maddie

The ‘Brian Douglas Wells’ event he referenced occurred in the US in 2003, when a man was killed after he detonated a collar bomb.

A never before seen X-Ray image taken while the bomb was still attached to Maddie’s neck displayed the complex situation officers were faced with.

The device featured a coded touch pad and sophisticated technology which initially baffled the team, who were working in a high pressure situation, fearing the intruder was watching from afar.

Maddie told Daily Mail Australia in October, 2019, she was living her dream as an interior designer.