Retired teacher James Young thought he was doing the right thing for his family by taking out an insurance policy to pay for his funeral.

But seven years on and the 90-year-old has now surrendered the over-50s plan — losing £1,270 — and started saving again from scratch.

Over-50s plans promise a fixed lump sum payable on your death, which is typically aimed at covering funeral costs — as long as you keep paying a monthly fee. 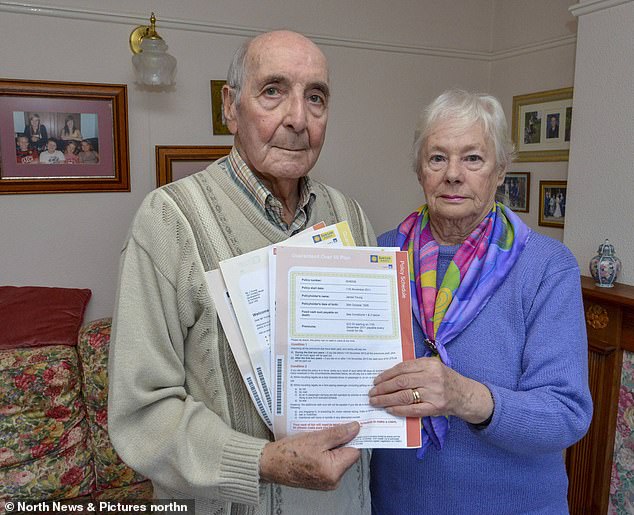 Cut their losses: James and Dorothy Young and the SunLife policy he has now surrendered

James, who is deaf and partially sighted, made the difficult decision to give up his SunLife policy after realising that he had paid in far more than his family would ever receive on his death.

The City watchdog said customers might think that the plans would cover the full cost of a funeral when, in reality, they would pay for only part of it.

With the average funeral estimated to cost £4,271, according to SunLife, James’s plan would have covered less than a third of the final bill.

James, who lives with Dorothy in Northallerton, North Yorkshire, signed up for the Guaranteed Over 50 Plan after a SunLife leaflet came through his door.

The couple, who have four children, thought it was a good idea to have some money put aside for James’s funeral as he is more than ten years older than Dorothy.

But it wasn’t until October last year, when Dorothy was going through bank statements, that she realised they were still paying for it.

When she called SunLife, an employee told her that they would face debt collectors if they cancelled.

When she complained, SunLife sent a letter assuring her she would not be chased by debt collectors, but confirmed the payout would be lost if payments stopped.

In the end, the couple decided to go ahead with cancelling the policy and have now set up an ISA to save for funeral costs instead. Dorothy adds: ‘We just want to cut our losses and stop paying, out of principle.

‘We don’t want to keep giving SunLife our money.’ 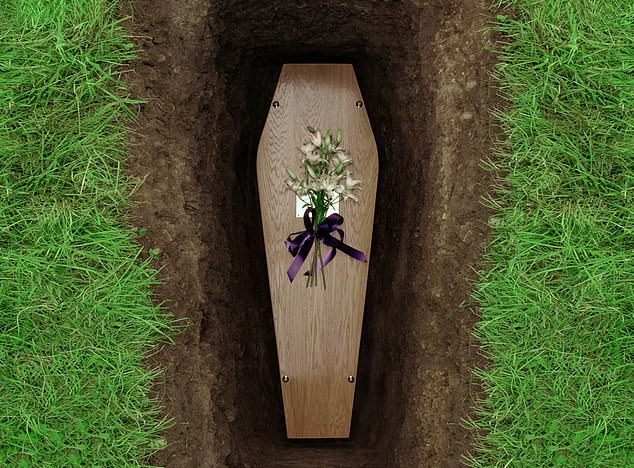 The City watchdog said customers might think that over 50s would cover the full cost of a funeral when, in reality, they would pay for only part of it

Janet McSpadden, 81, from Hamilton, South Lanarkshire, signed up to a SunLife plan in January 2009 for a payout of £890 when she died.

The mother-of-two, whose husband is in a care home, has handed over £9 every month and has now paid in £1,071. But she will lose it all if she stops her payments.

Janet, who used to run a haulage business, says: ‘I didn’t know that I could end up paying in more than the payout.’

‘I feel like I’ve been robbed. They shouldn’t be allowed to get away with this.’

Unlike most policies which require customers to keep paying until they die, he is bound to his monthly payments until April 8, 2023 — the final anniversary of the plan before his 90th birthday.

He had six children with his late wife Maureen, a former nurse, and they both took out plans for the peace of mind.

But when Maureen died aged 79 on their wedding anniversary in 2013, the £1,780 payout didn’t cover the cost of her funeral.

Complaints website Resolver received 117 grievances about SunLife in the first six months of 2018 — a rise from the 105 in the previous six months,

Martyn James, at Resolver, says: ‘The fact that every year, a consistent number of people complain they didn’t realise they could pay in more than they’d get out demonstrates that the warnings with these products need to be much clearer.’

He adds that it is always worth querying your policy with the company if you’re concerned.

A SunLife spokesman says: ‘As with any insurance, it is possible to pay in more than you will get back. We explain this very clearly, and when a customer buys, we tell them — based on their current age and the premium they have chosen — exactly what age they will be when they have paid in more than they will get back.

‘We also explain very clearly that if someone stops paying their premiums, their cover ends and they get nothing back.’

SunLife also says that customers can cap their premiums.