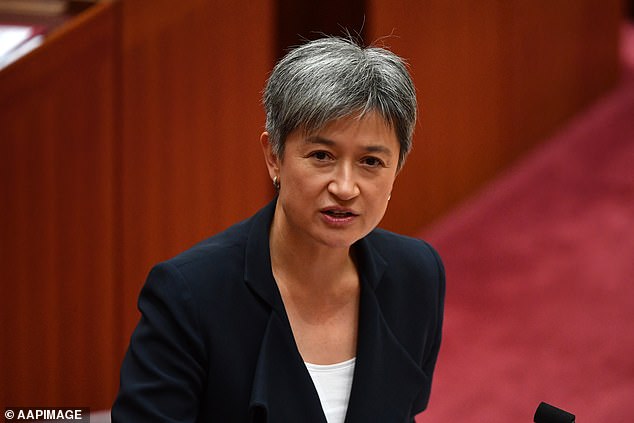 Labor’s leader in the senate Penny Wong has revealed she personally knew the woman who alleged she was raped by a senior government minister, and referred her to support services.

Senator Wong, along with Prime Minister Scott Morrison and Greens Senator Sarah Hanson-Young, received a letter about the alleged 1988 rape this week.

The woman died in June 2020 and it is understood the letter was not written by her.

However the letter came with a detailed statement attached, prepared by the complainant for her lawyer, ABC’s Four Corners has reported.

Senator Wong released an initial statement on Friday saying she had referred the letter to the Australian Federal Police and was aware the matter was already before NSW and South Australian police.

On Saturday Senator Wong issued a further statement ‘in the interests of transparency’ revealing she had detailed prior knowledge of the matter.

‘I first became aware of the complainant’s allegation when I ran into her in Adelaide in November 2019,’ the senator wrote.

‘The complainant reminded me we had met once before.’

‘The complainant made an allegation that she had been raped many years earlier by a person who is now a senior member of the federal government. She indicated she intended to report the matter to NSW Police.

‘I said that making a report to the appropriate authorities was the right thing to do. I facilitated her referral to rape support services and confirmed she was being supported in reporting the matter to NSW Police.’

Senator Wong said the woman’s death was a tragedy and her thoughts were with her family and friends.

The senator’s statement follows comments by federal frontbencher Simon Birmingham who told reporters in Adelaide the minister at the centre of the allegations should not be made to step aside.

The trade, tourism and investment minister was questioned in his home state of South Australia on Saturday about whether the man in question should come forward or be identified.

‘I’m not sure then how you think it would be resolved thereafter,’ Mr Birmingham replied.

‘We have to respect that we have justice systems in Australia, that everyone is entitled to natural justice and that in this case allegations have been made … and we have to back the appropriate authorities.’

‘We back the police to do their job in this … I don’t wish to see anybody lose their rights to natural justice.’

The year the alleged rape occurred is well before the cabinet minister concerned entered politics. The complainant was aged 16.

A spokesperson for Mr Morrison indicated on Friday evening the allegations had been referred to the Australian Federal Police, which Mr Birmingham confirmed.

The AFP on Saturday said it would liaise with the relevant state authorities.

Four Corners says the woman reported the alleged rape to NSW Police in February 2020, but took her own life in June after informing them she no longer wanted to proceed with the complaint.

NSW Police said in a statement on Friday that a report of alleged historic sexual violence was received in February 2020 and detectives commenced an investigation under Strike Force Wyndarra.

‘After strike force investigators were advised that the body of a 49-year-old woman was located at a home at Adelaide by South Australia Police (SAPOL) on Wednesday 24 June 2020, the investigation was suspended,’ the statement said.

The Morrison government has been under intense pressure over its response to the 2019 incident, in which Ms Higgins alleges she was sexually assaulted by a former colleague in Parliament House.

There are four inquiries under way, including a multi-party investigation aimed at ensuring parliament is a safe working environment.

Media: A woman was killed during a protest dispersal in Myanmar