Married people have revealed the reasons why they remove their wedding rings – and it’s not always to cheat.

People from around the world took to anymous confessions-sharing app Whisper to explain why free drinks and speeding tickets both easier to sway if you’re single.

One person admitted that they take off their ring when they cheat on their husband, while another wanted to pick up a younger person on a business trip. 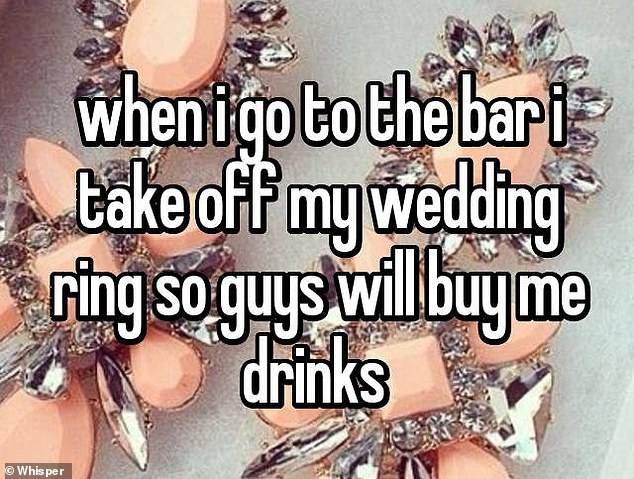 People from around the world have been admitting why they don’t wear their wedding ring on anonymous confessions-sharing app Whisper, including one from Philadelphia, Pennsylvania, who removes their ring so guys will buy them drinks at the bar 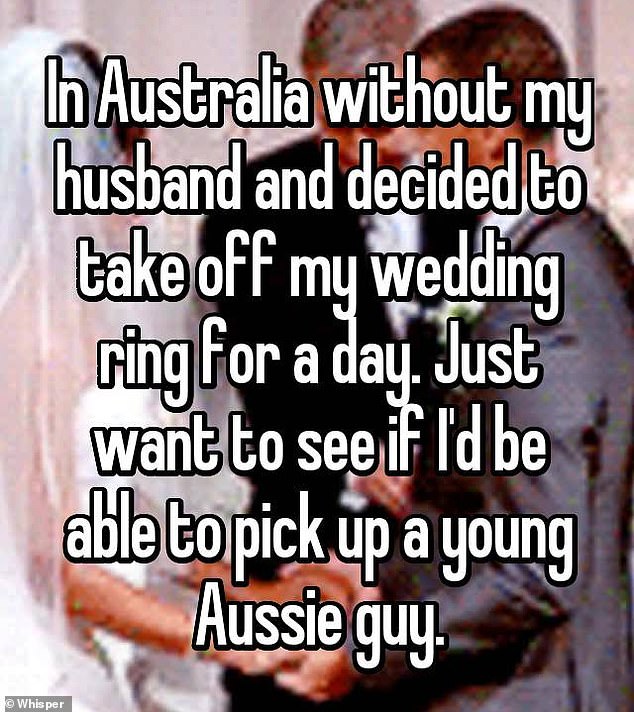 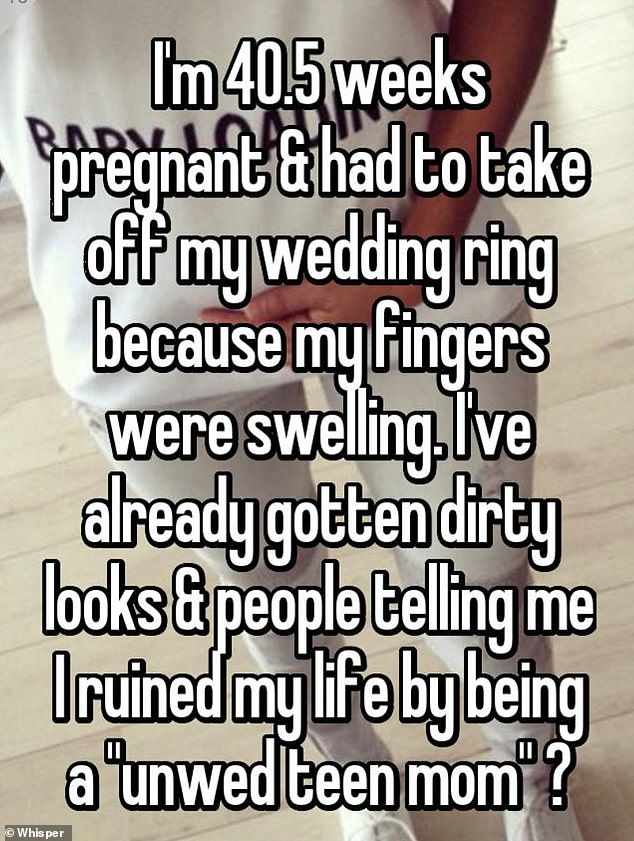 One pregnant woman, from California, received ‘dirty looks’ and was told she had ruined her life by being an ‘unwed teen mother’ when she removed her wedding ring due to swelling in pregnancy 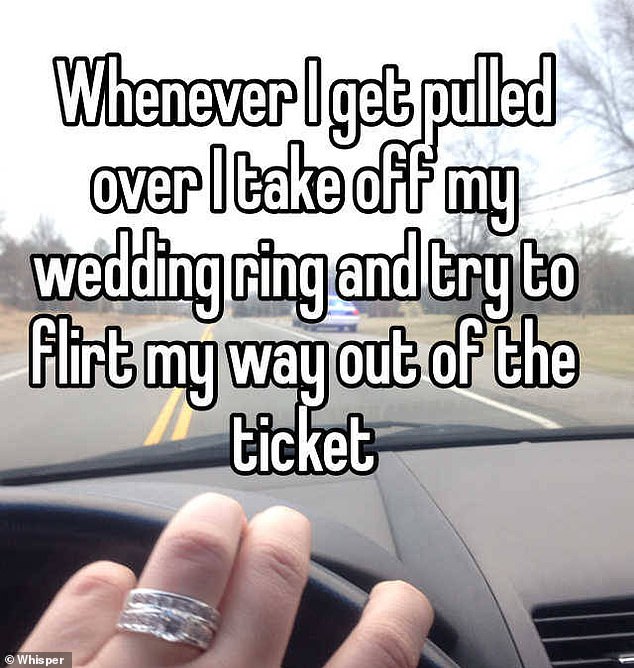 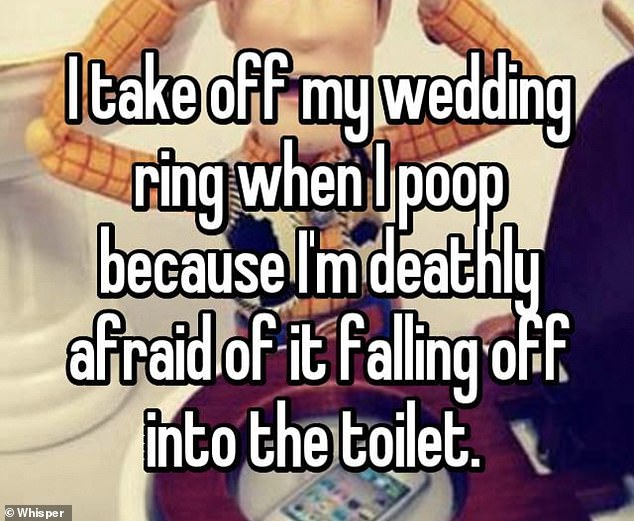 A messy end! One user, from an unknown location, detailed how they remove their wedding ring when they go to the toilet because they are ‘deathly afraid’ of it falling in 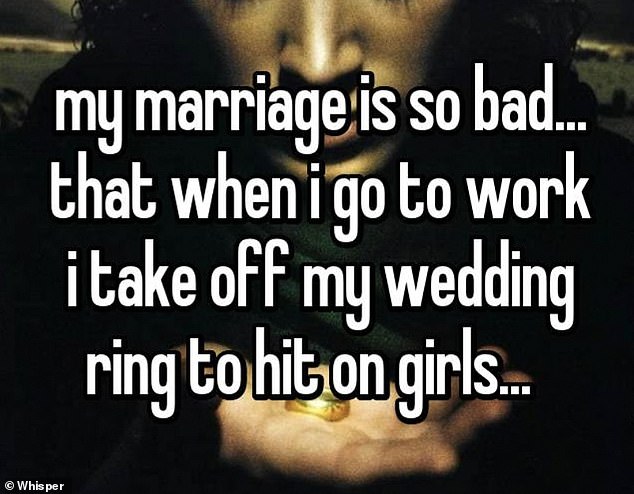 Another, who said they have a ‘bad’ marriage, said they take off their ring so they can ‘hit on girls’ when they go to work 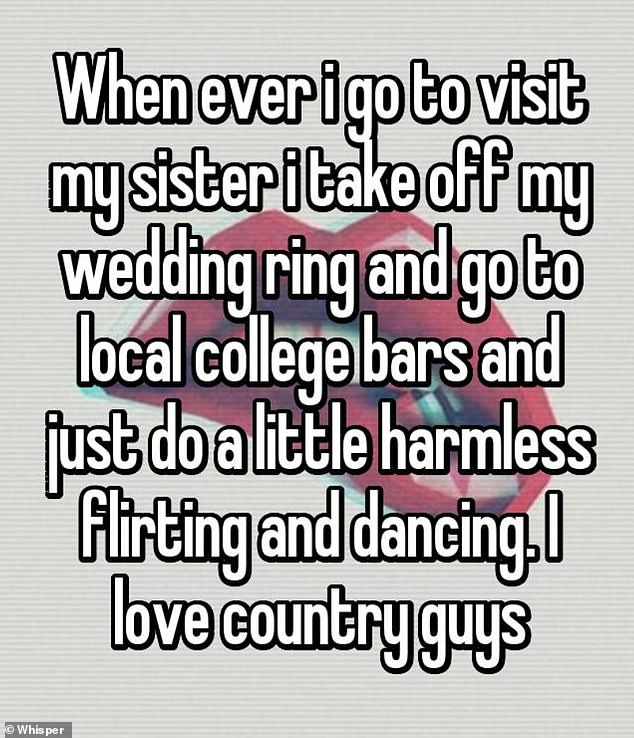 Another person, whose location is unknown, removes their ring whenever they visit their sister and go to local college bars so they can ‘just do a little harmless flirting and dancing’ 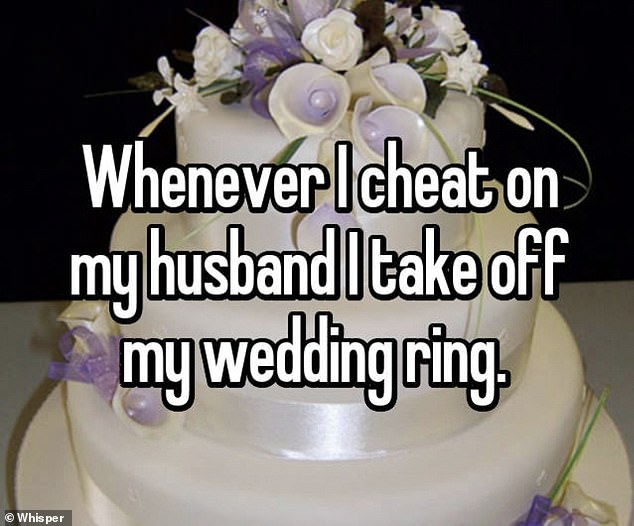 Another, from an unknown location, said that their wedding rings comes off whenever they cheat on their partner 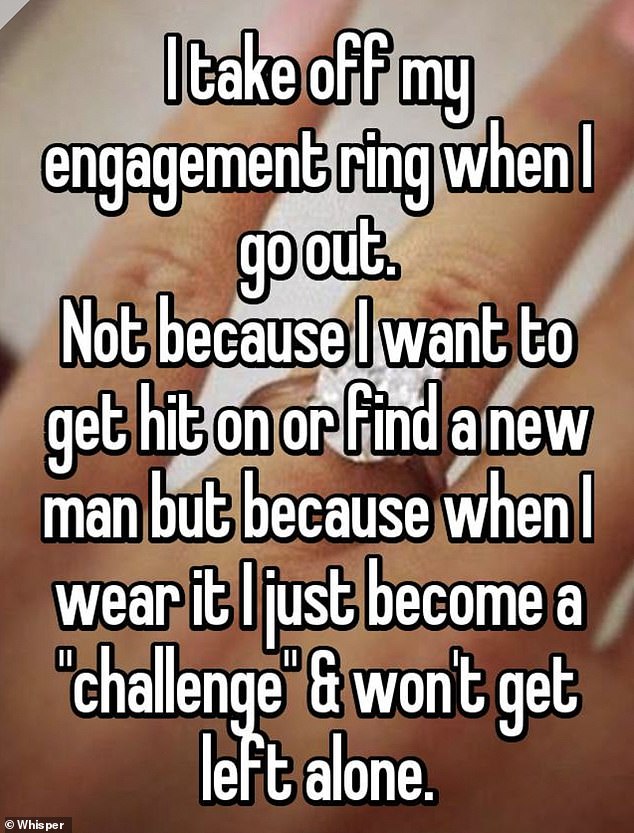 Someone else, from an unknown location, said that they take it off when they go out because they receive more attention when they are wearing it 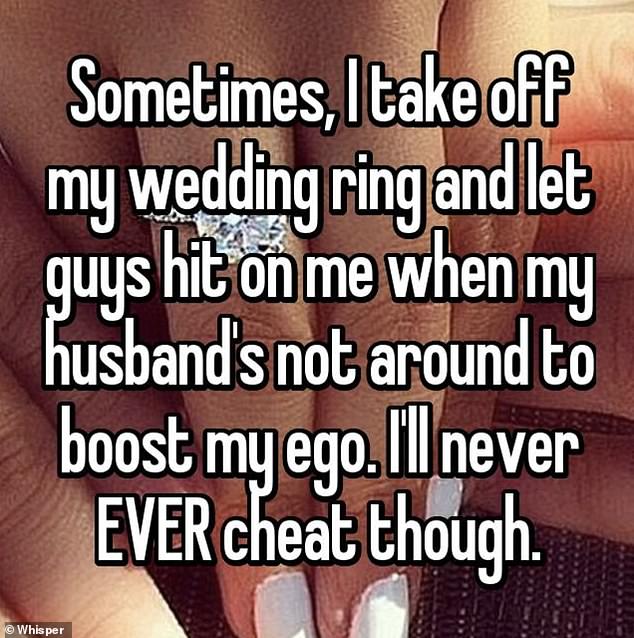 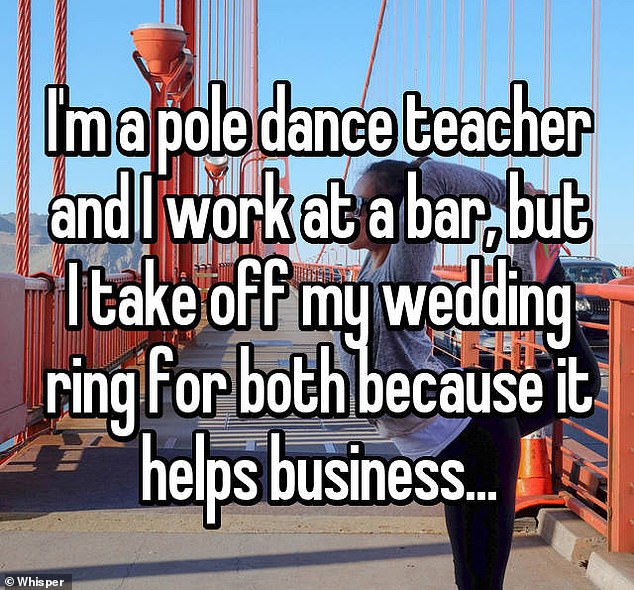 Another person, from Shanghai, China, said that they take off their wedding ring because ‘it helps business’ because they’re a pole dance teacher and work at a bar 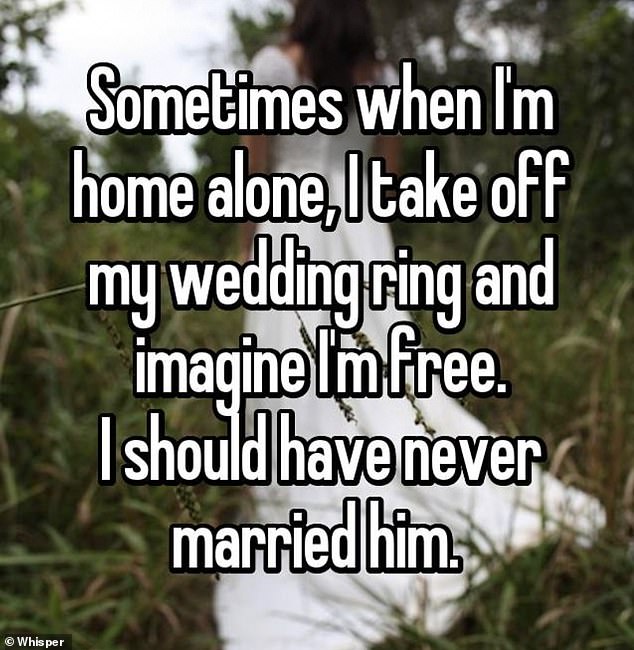 Another, from Jacksonville, takes their wedding ring off when they are home alone and in order to ‘imagine they are free’, admitting they ‘should have never married him’ 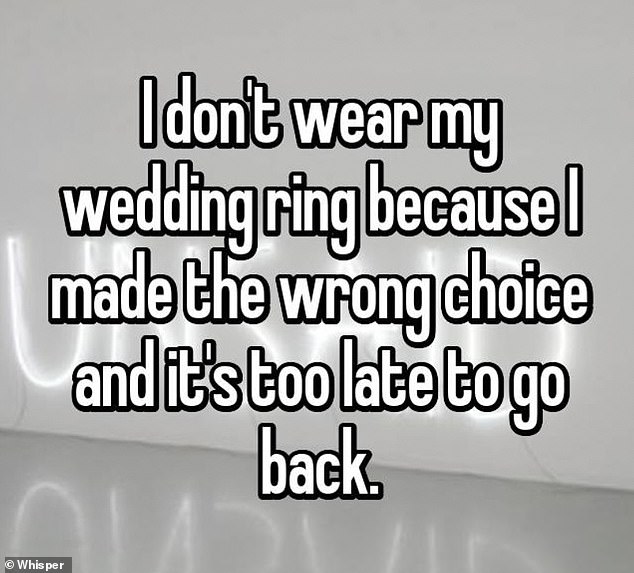 Another user, from an unknown location, admitted that they don’t wear their ring because they ‘it’s too late to go back’ after making the ‘wrong choice’ 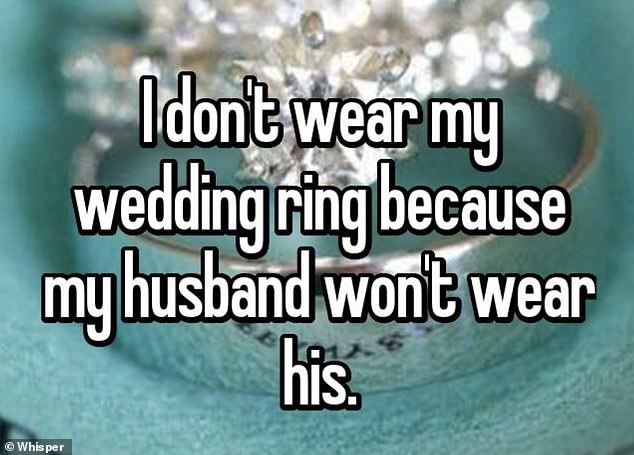 Another user, from Minnesota, admitted that they don’t wear their wedding ring because their husband doesn’t wear his 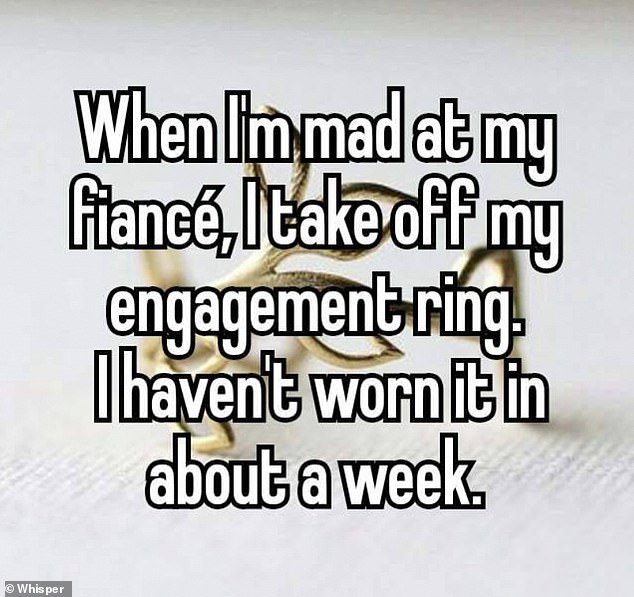 A user, from an unknown location, takes off their engagement ring when they are angry with their fiancé and revealed they haven’t worn it ‘in about a week’ 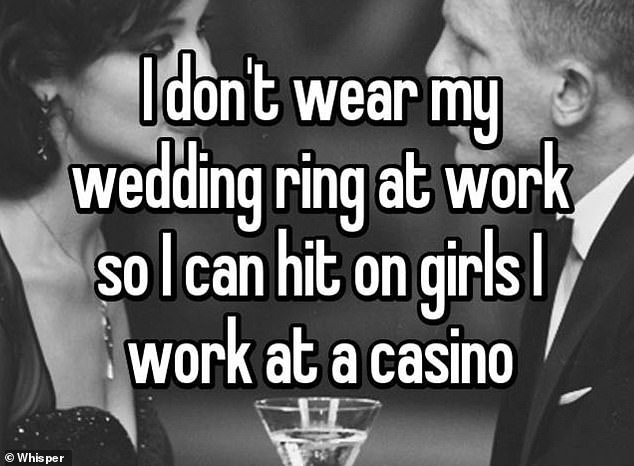 A user from Michigan admitted that, when they work at a casino, they take off their wedding ring so that they can ‘hit on girls’ 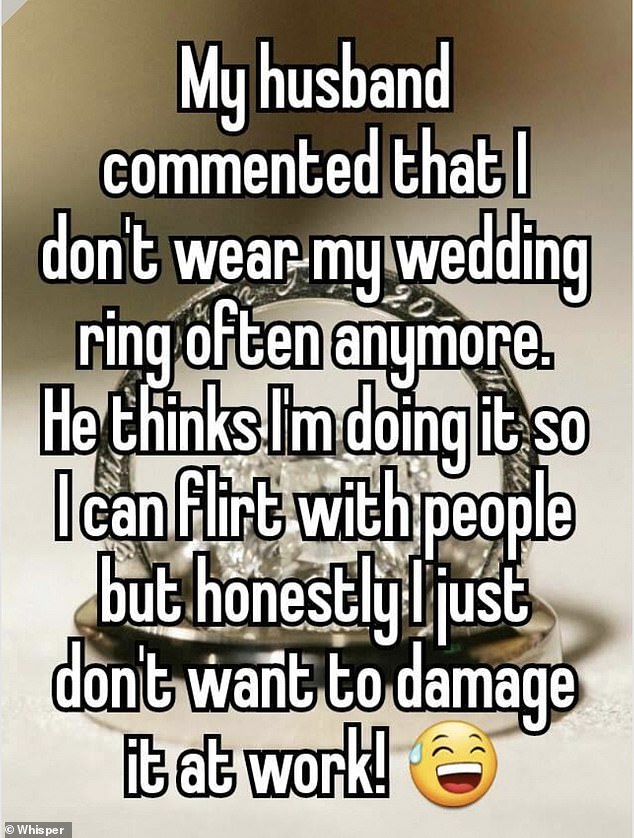 Another user, from an unknown location, said they don’t wear their ring often anymore because they don’t want to damage the jewel while at work 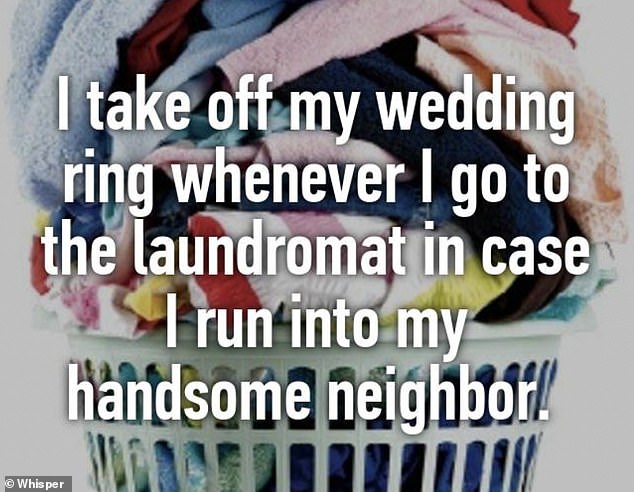 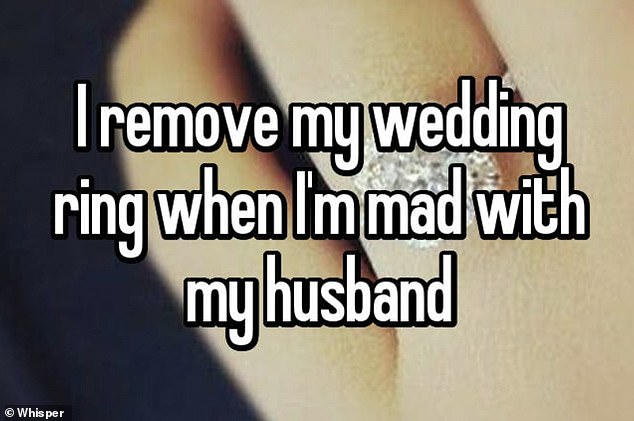 Meanwhile another woman, from San Antonio, confessed to removing their wedding ring whenever they were angry with their husband