Here comes the bridezilla! Shocking social media posts capture outlandish wedding behaviour – including one notice telling guests how to style their hair and what to spend on gifts

Weddings are a stressful time for many, and trying to organise everything can seem like a huge task- but some brides appear to have taken their demands for a perfect big day to the next level.

People from around the world have taken to social media to share the biggest bridezilla moments they have encountered, with WorldWideInterweb rounding up a selection of the most shocking posts.

One exchange reveals how a bride asked her friend make all 20 table decorations in one week and uninvited the guest when they say no.

Another American bride sent out a lengthy email with ‘dos and don’ts’ for the big day, including no gifts under $75 and a list of acceptable hairstyles. 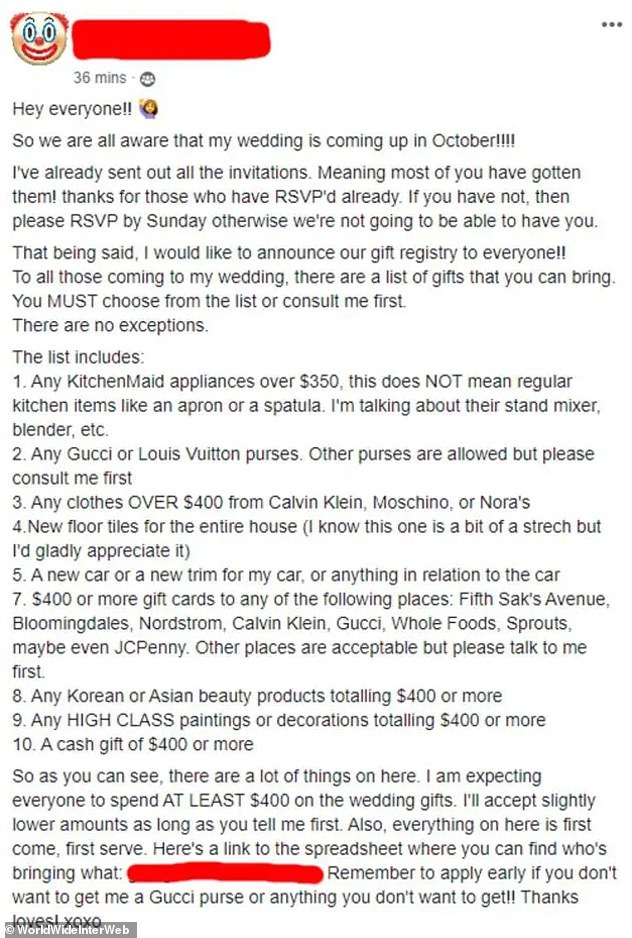 People from around the world have been sharing their worst bridezilla moments, with WorldWideInterweb rounding up a selection of the hilarious stories (pictured, one bride, from the US, asked her guests to spend a minimum of $400 on gifts and even sent a list of the top ten things she’d like them to splurge on, including Gucci purses and a new car) 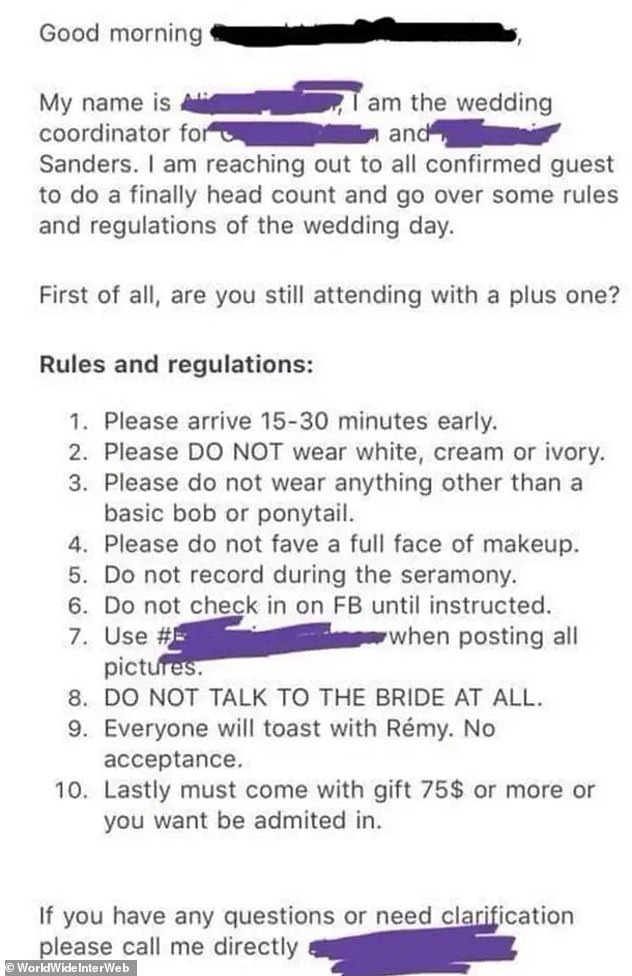 A list of ten rules – including not speaking to the bride – was sent to these American guests, who were told they wouldn’t be allowed into the venue without a gift over $75 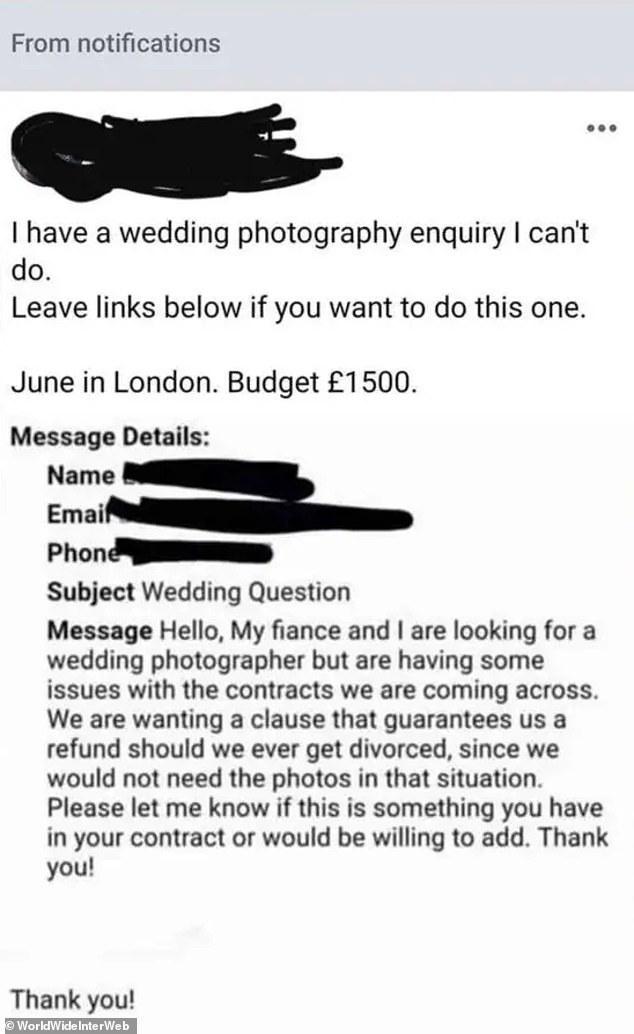 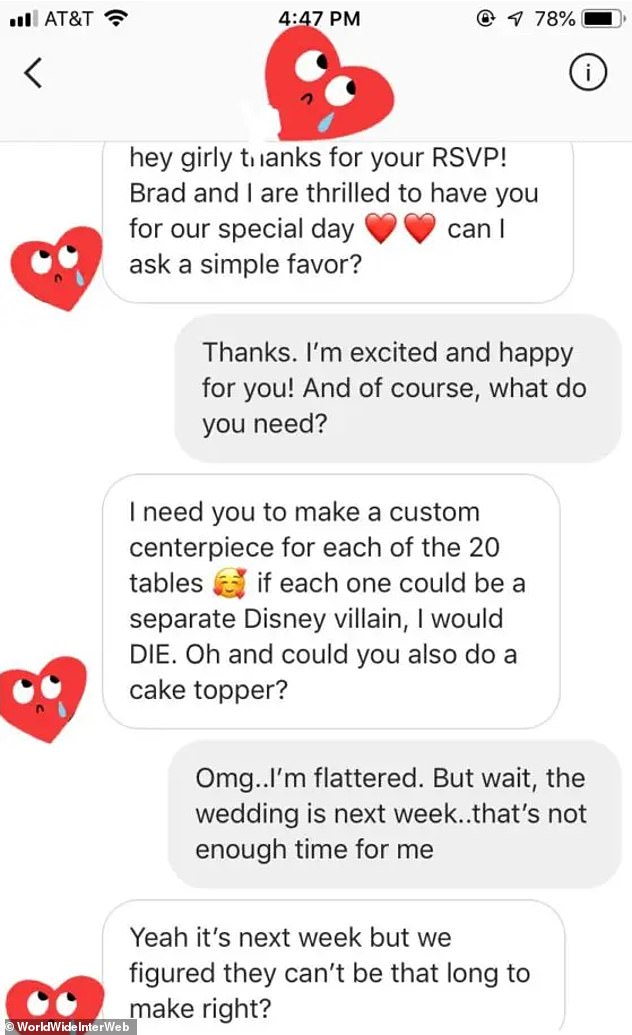 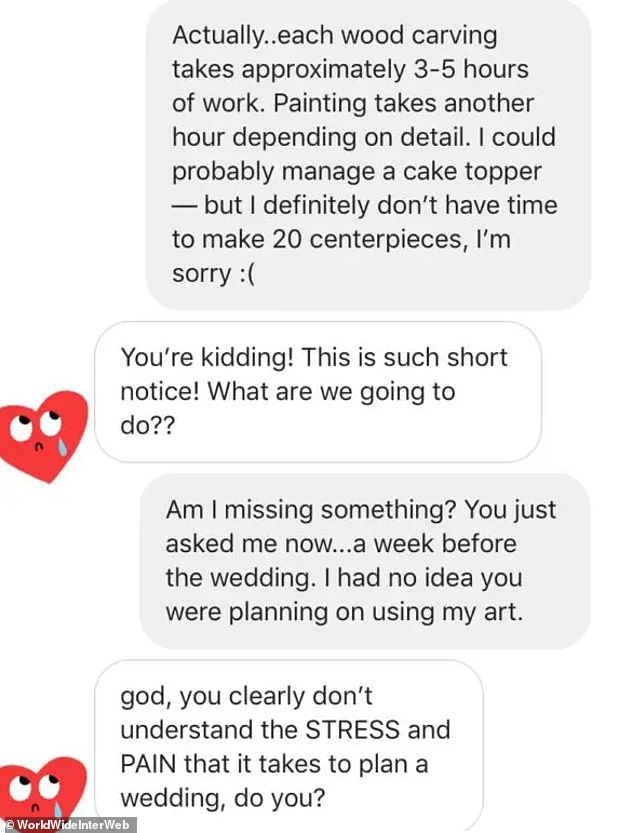 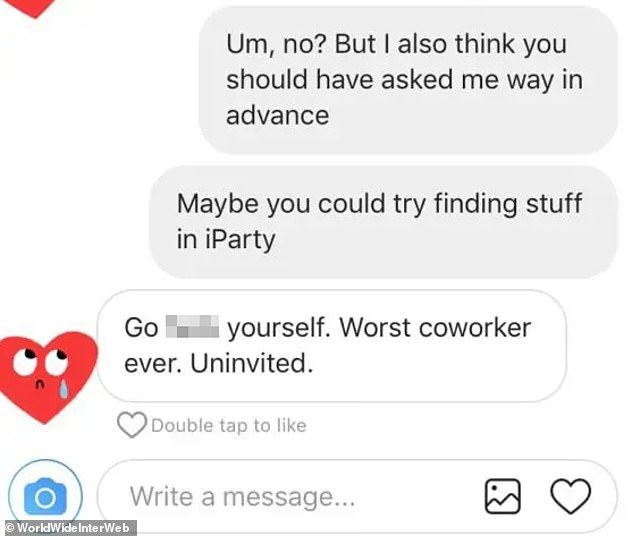 One guest, believed to be from the US, was swiftly uninvited to a wedding after the bride asked her to create 20 table decorations for her big day in one week’s time and she declined 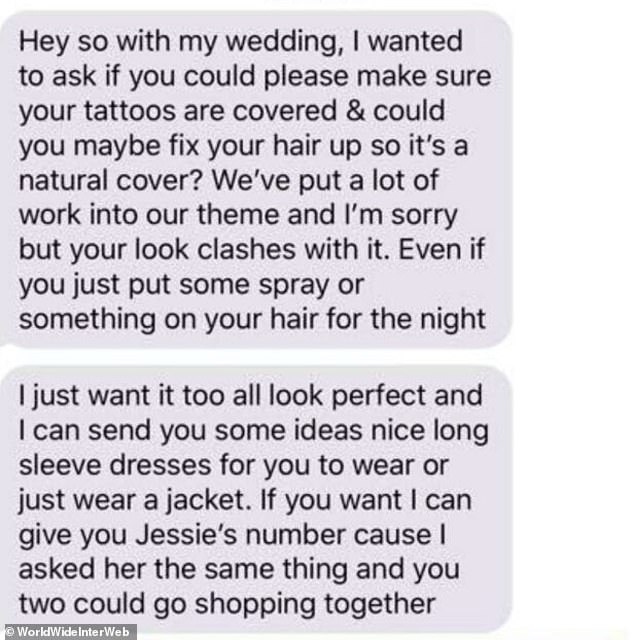 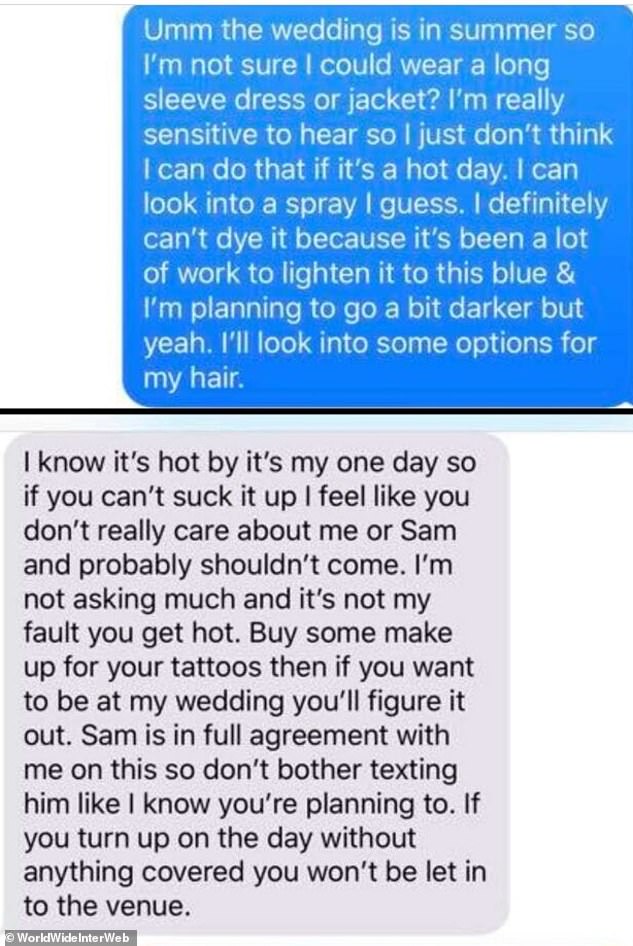 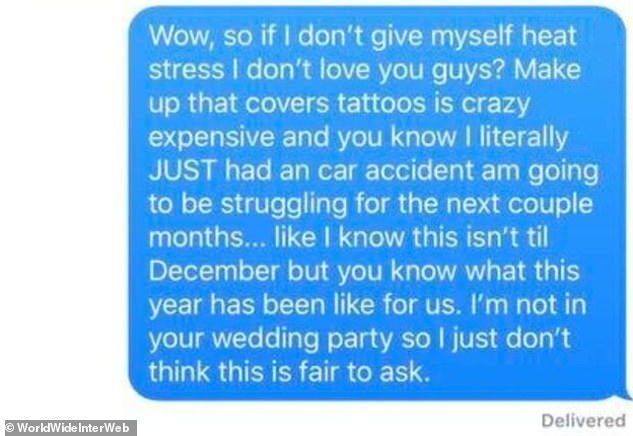 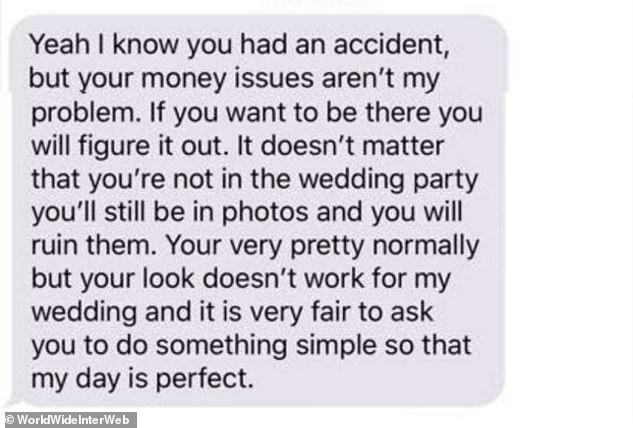 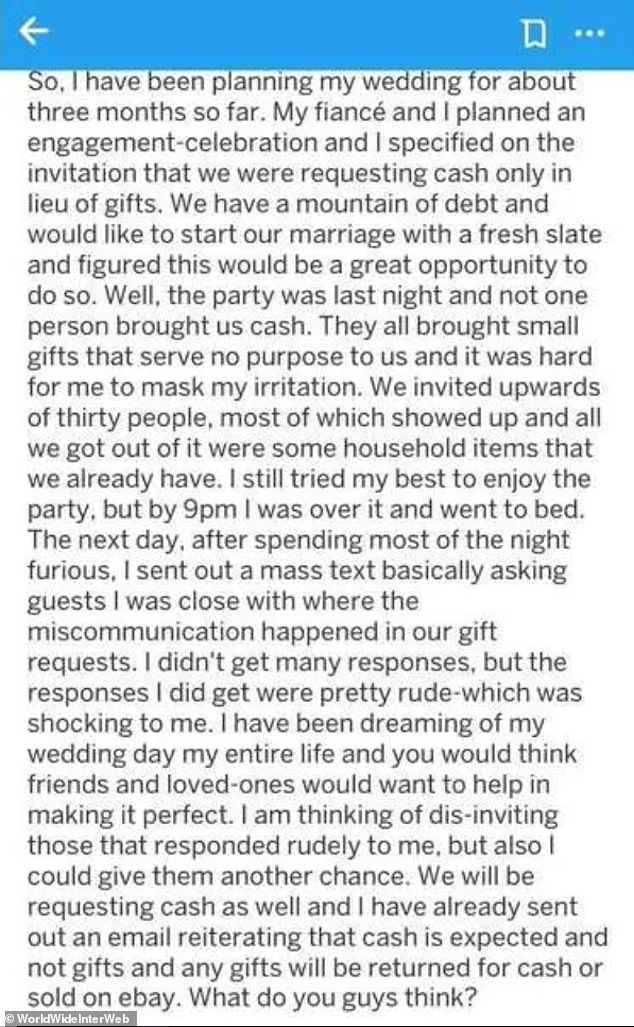 One bride, from an unknown location, with a ‘mountain of debt’ asked guests for cash only instead of presents – but was left disheartened when people turned up with ‘small gifts with no purpose’ 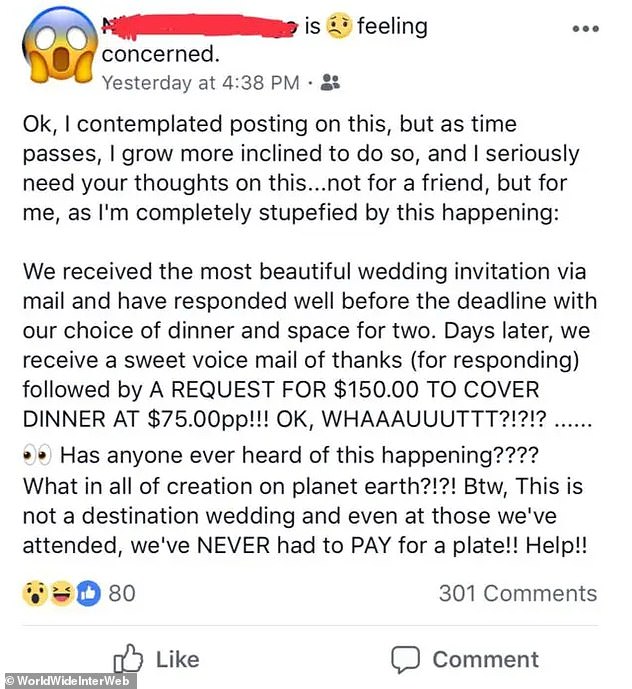 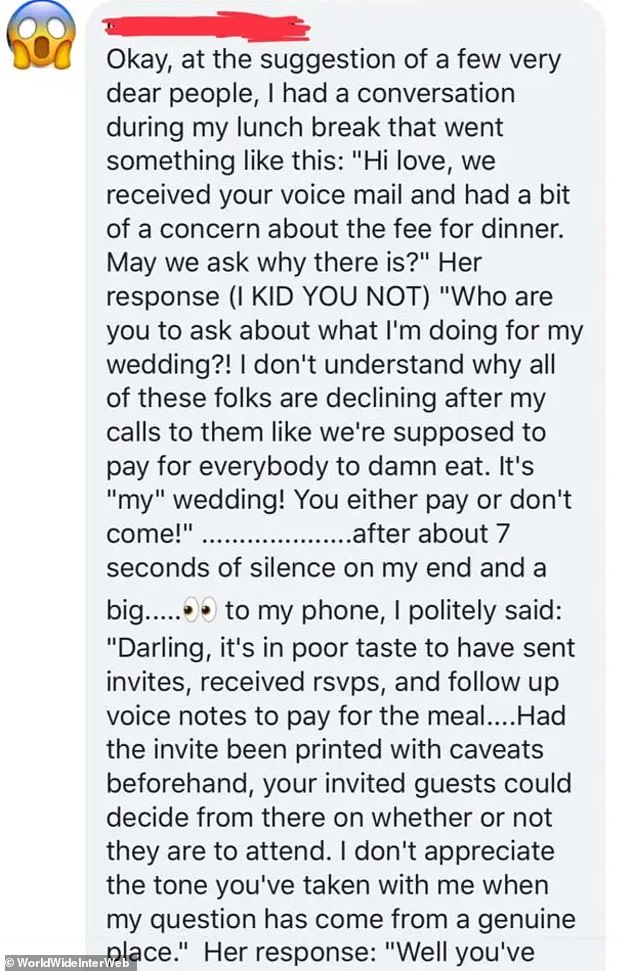 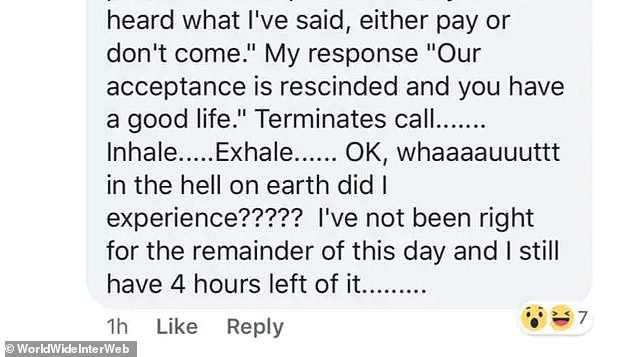 One bride seemed particularly annoyed that her guests weren’t happy about paying for their own meals, after she charged them $150 to cover dinner

LIVE UPDATES: Biden to meet with Russia's Putin in Switzerland for high-stakes summit