Should have said ‘I don’t’! Guests share their most cringe-worthy big day snaps – from drunk brides to a mother-in-law turning up in a wedding dress

Wedding are always cause for celebration, but as some unlucky guests found out, they are not universally tasteful.

People from the US have shared snaps of the most outrageous things they’ve spotted at weddings, in a gallery collated by Bored Panda.

One of the worst offenders was a mother-in-law from Ohio who turned up in a white gown that looked exactly like a wedding dress for the big day, much to the inevitabele horror of the bride.

Elsehwere, antoher bride was photographed exiting her ceremony over her husband’s shoulder with a bucket hanging around her neck after getting a bit too carried away, while another desperately clutched a bottle of wine and refused to let go.

And grooms did not escape either, with one making a bad impression by asking guests for donations to buy a gun rather than going on honeymoon. 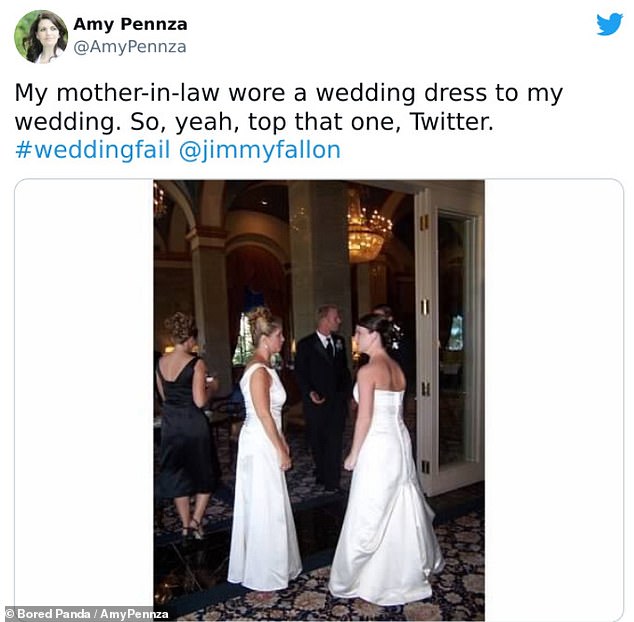 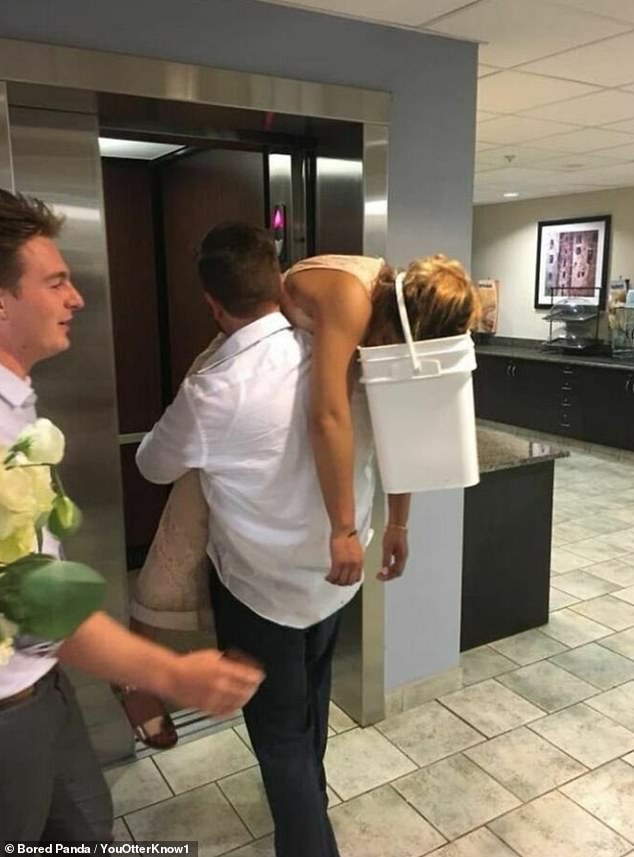 Not the wedding night they had in mind! One bride had a little bit too much to drink and ended the night with her head in a bucket as her groom carried her to bed 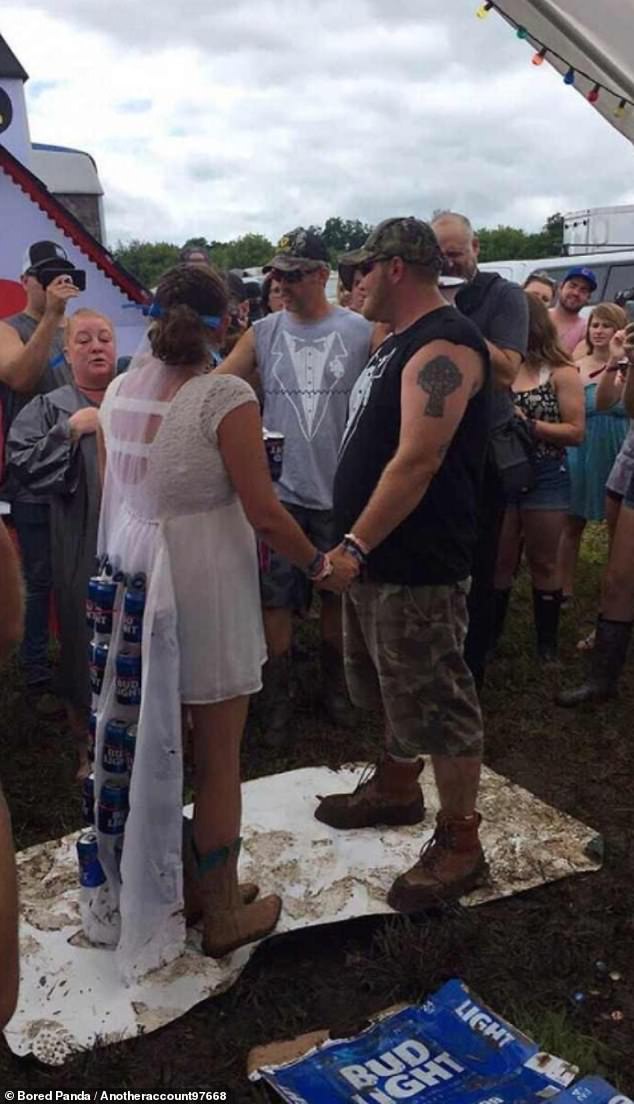 Beer comes the bride! A US-based womean went one step further and decorated her train with cans of Bud Light beer on her big day 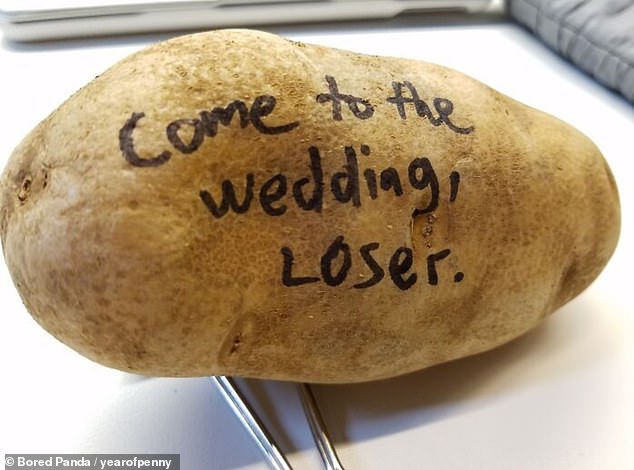 Would you RSVP? This bride and groom scrawled a message on a potato rather than sending a proper invitation 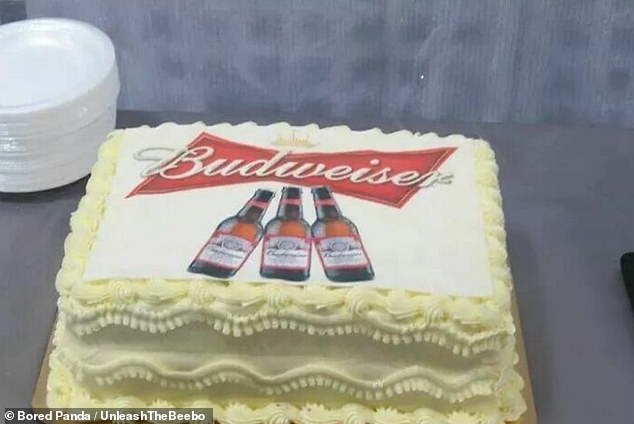 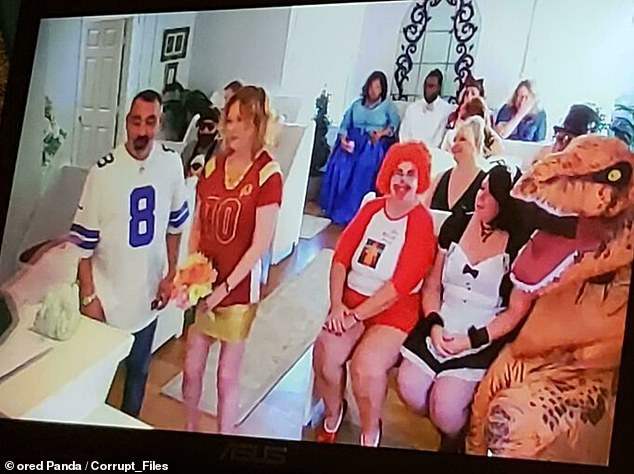 One person explained their uncle streamed his Vegas wedding online, which was attended by people in fancy dress, including someone in a T-Rex costume 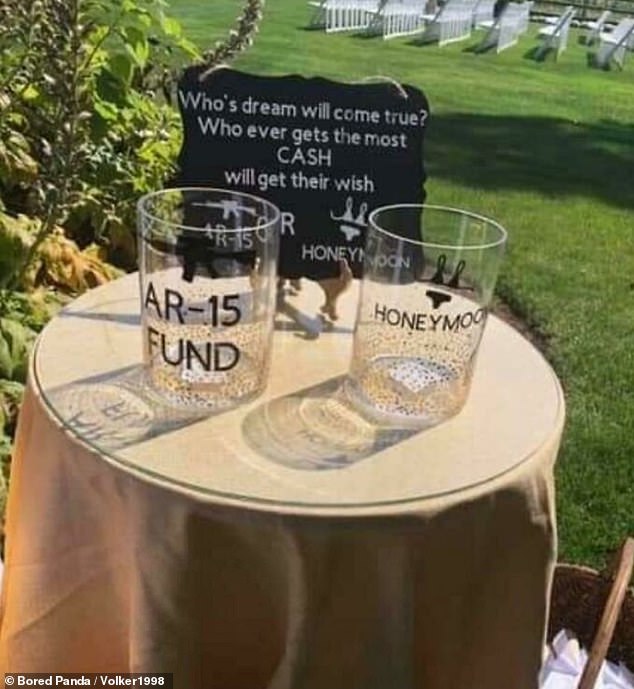 One wedding guest showed how a bride and groom put tipping jars to see would would get the most money – the groom wanted a semi-automatic rifle, while the bride wanted the honeymoon 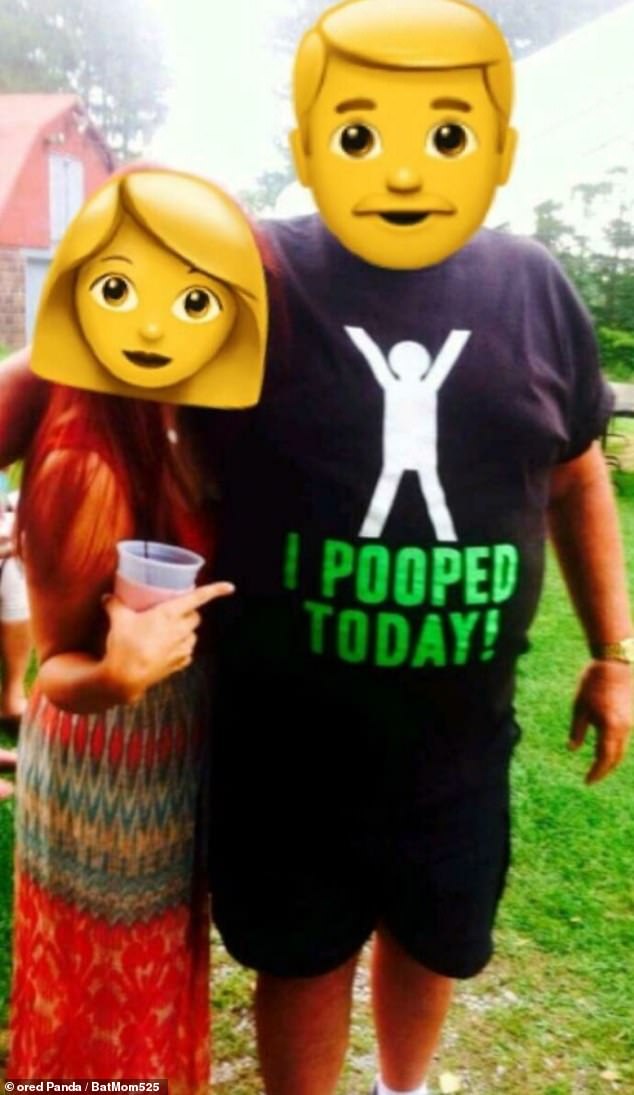 And that’s why you should always have a dress code: One woman from Pennsylvania shared a picture of this guest who rocked up at a wedding with a t-shirt that read ‘I pooped today’ 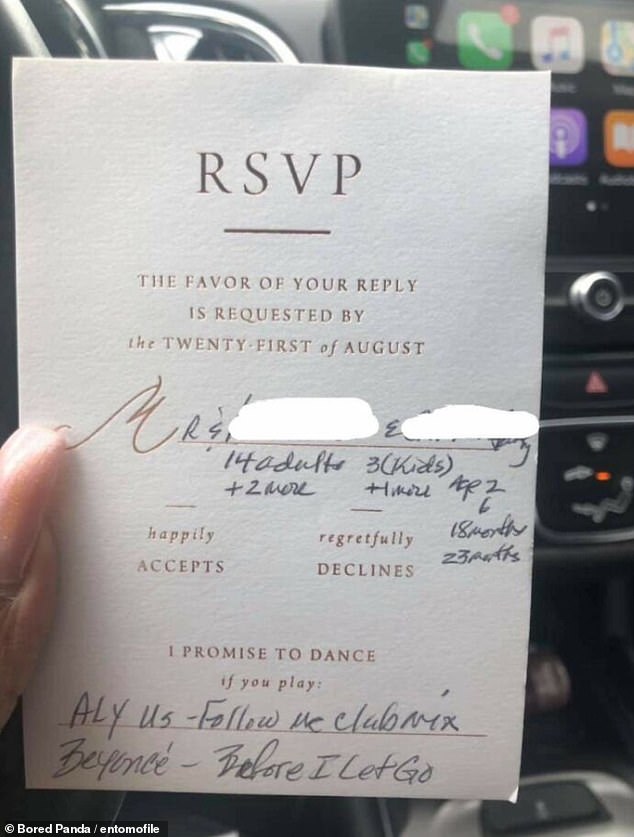 Cheeky! One guest showed that a guest added 20 extra persons to their wedding RSVP without consulting the bride and groom 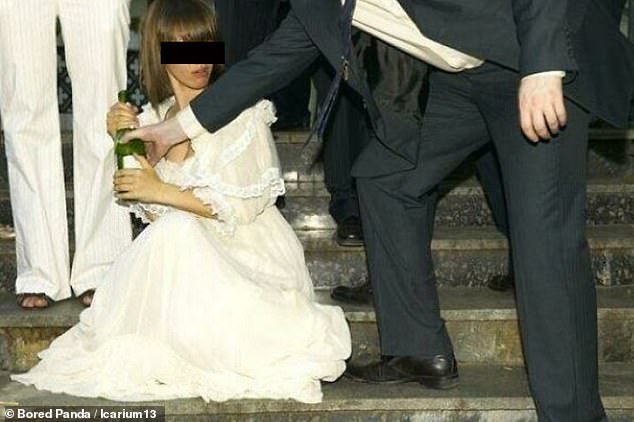 Wine not! One bride refused to give her bottle away after a few drinks at her wedding reception, in what has been called the ‘Best wedding picture ever’ 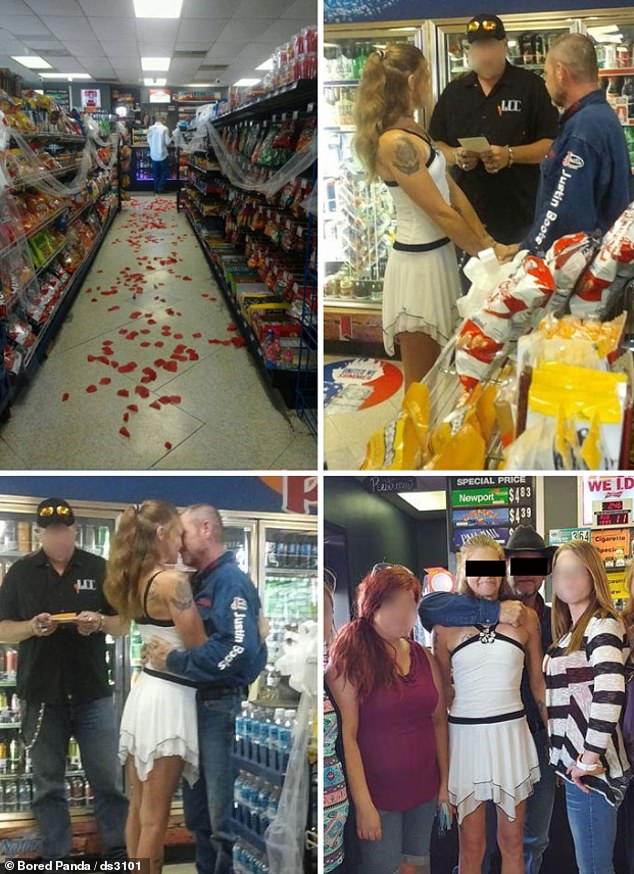 Aisle marry you! One couple decided to have a quaint ceremony at a local gas station, with rose petals strewn on the floor 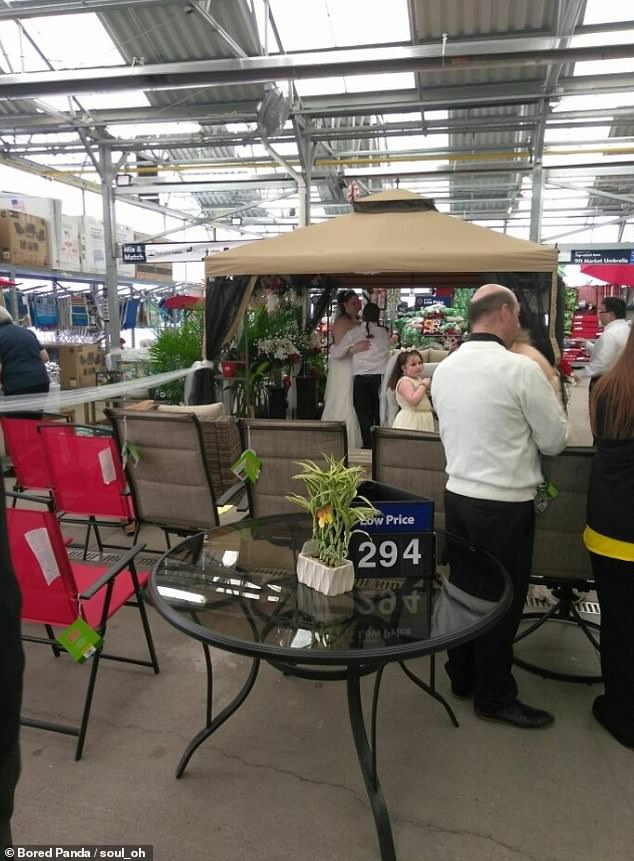 That’s one way to save money! A customer said they were shocked to see someone was having a wedding in the garden furniture section of their local Walmart 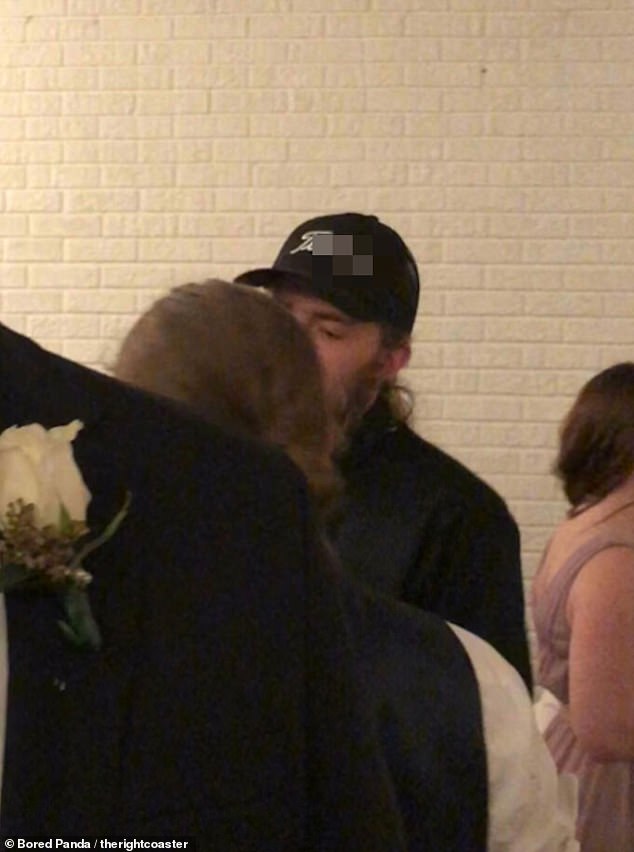 In the US, one man decided to wear a hat that praised a certain part of the female anatomy at his friend’s wedding 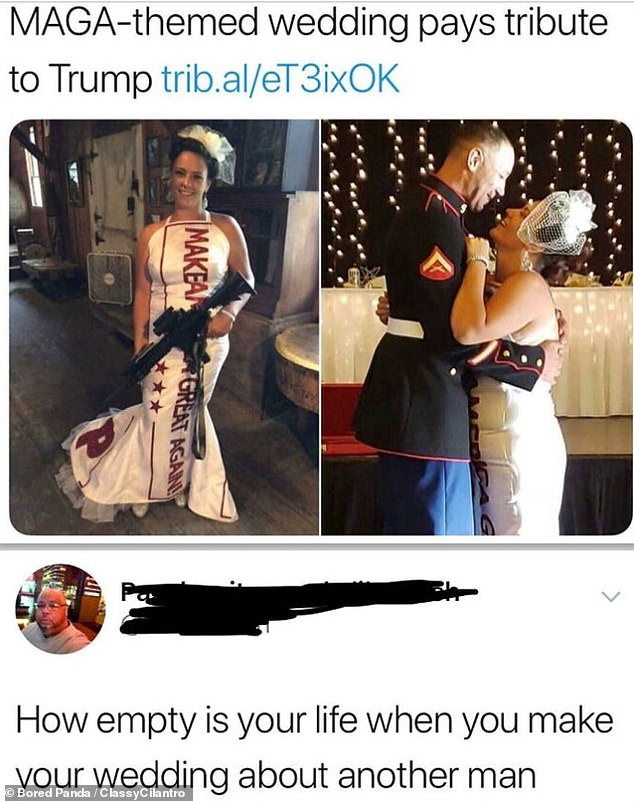 Shiba Inu price remains one of the hottest topics ever since it rallied notably in the...