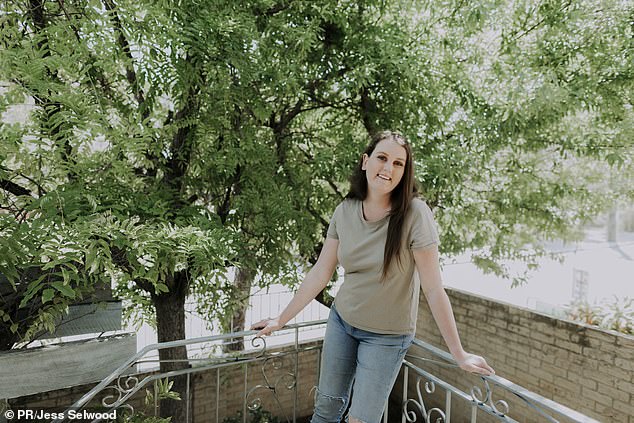 
A talented Perth student whose dream job at Disney World turned into a nightmare when she mysteriously started to go blind and deaf has revealed how the sudden health change led to a shock cancer diagnosis.

Jess Selwood, now 23, spent summer working at ‘the happiest place on earth’ in Orlando, Florida in 2018 after taking a break from her masters degree in taxation law.

In October that year she suddenly started to lose her hearing, eyesight and began to vomit frequently while working at the world-famous theme park.

Ms Selwood tried to get answers in the United States but was put off by potentially huge medical bills and concerns she may have just been acting ‘dramatic’.

In January the following year, she flew back to Perth, Western Australia, and had an MRI scan the day after she arrived home.

Ms Selwood was given the devastating news that she might have an aggressive form of brain cancer known as glioblastoma.

Jess Selwood, now 23, decided to take a break from her masters degree in taxation law and spend the summer working at ‘the happiest place on earth’ in Orlando, Florida in August 2018

She was immediately sent for surgery on the tumour – which was the size of her fist – but doctors drained it using a shunt instead.

Tests were performed to determine if it was cancerous and two weeks later, Ms Selwood’s life changed in an instant.

‘I was in a dream state. Everything between the surgery and the diagnosis is a bit foggy,’ Ms Selwood told Daily Mail Australia.

‘I don’t think I fully comprehended how serious it was – and I was probably on a bunch of pain medications as well.’

Ms Selwood said the wait to find out her fate from the surgeon while he took out her staples from the procedure was agonising.

‘It was a strange thing having to get this done while being so anxious. Then, he told us the diagnosis,’ she said.

‘My parents, my partner and I all burst into tears.’

Ms Selwood found out the mass was on top of her central nervous system – making surgery impossible due to the risk of damage.

‘I was never strictly told it was terminal – but that is what it is, for insurance purposes,’ she said.

Ms Selwood was working as a lifeguard at Disney World when she started to losing her hearing, eyesight and was vomiting constantly

‘I say I have terminal cancer and I use that as motivation to keep going but I don’t let it hold me back or keep me down.’

The 23-year-old is incredibly excited about Christmas – her favourite time of year.

‘It was always a very special time for us growing up. My brother and I would always wake up early and rush into our sister’s room,’ she said.

‘We would stay up and try to catch Santa, rush to grab our stockings and open them in our rooms.’

The days were spent splashing in the pool, enjoying a delicious barbecue with family and going on overseas trips.

This included Disney World, where she would work several years later.

She said Christmas is different now she is an adult, splitting it between time with her loved ones and her boyfriend’s family.

‘It is just filled with so much love.’

Ms Selwood said having a terminal illness in the middle of the COVID-19 pandemic made this year all the more challenging.

She knew her immune system wouldn’t be able to fight off the virus if she became infected.

Ms Selwood said she was incredibly thankful to have her family and partner.

She also praised young adult cancer organisation CanTeen and their new program SPACE, which is why she spends so much time volunteering for the group.

‘It is one way for me to take control of my cancer, and make a difference in the world before this thing takes me,’ she said.

Coronavirus meant the organisation had to switch online, meaning people around the country could meet.

This is how SPACE – a program run by clinicians who help people adapt to their diagnosis – was born.

Sandy Cham, General Manager of Services at CanTeen, said: ‘What’s wonderful about SPACE is the immediate sense of connection between the young people involved as they reflect on how cancer has impacted them physically, socially and emotionally.

‘SPACE really supports these young people as they explore their values and strengths while learning new coping skills and techniques.

‘At the end of the program everyone felt a very real sense of shared understanding that, while cancer is now part of their life stories, it won’t define who they are or what they’re capable of.’

More information about CanTeen can be found here.

WHAT IS JESS’S CANCER?

Glioblastoma is an aggressive form of brain tumor that grows incredibly fast inside of the patient.

Around 12 to 15 per cent of patients with brain cancer have this type of tumour.

The median survival rate for this type of cancer is 12 to 15 months.

Treatment includes surgery – which is not possible in Jess’s case due to the location of the tumor – or radiation or chemotherapy.