‘I’m asking the questions here’: Perth man trolls police outside a station as they ask him to wear a mask on eerily deserted city streets on first night of five-day lockdown

A video has emerged of a man trolling two policemen who told him to wear a mask one hour into Western Australia‘s snap lockdown that began on Sunday evening.

The video, uploaded to YouTube, details his walk through the eerily quiet streets, before his encounter with the police.

The man gives his viewers a tour of the back of a police station before ranting at cops, who are asking him to wear a mask. 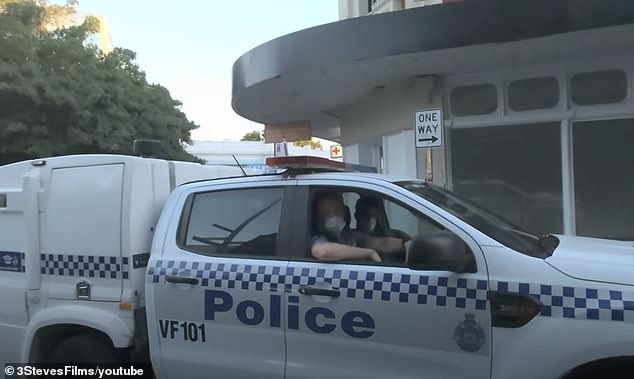 The policemen then tell the man he has five minutes to leave the premises.

Lockdown rulings will continue until Friday night throughout metropolitan Perth, Peel and the South West of Western Australia.

The snap lockdown came after the state celebrated ten months free of coronavirus, when a security guard tested positive at the Four Points hotel by Sheraton Perth.

There were four active cases in the hotel quarantine when the security guard was working at the hotel.

Western Australian Premier Mark McGowan confirmed that of the four cases, three were variant strains, one from South Africa and two from the UK.

‘We are told the guard was working on the same floor as a positive UK variant case’, Mr McGowan said.

The family of the security guard have tested negative for Covid-19 and are currently in quarantine in a state run facility. 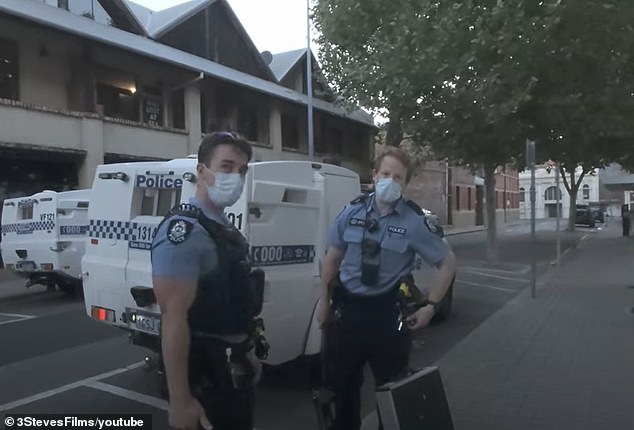 The policemen demand the man puts on a mask as he teases police, asking them ‘if there’s anything they won’t do for money’ before giving the troll five minutes to leave the premises

Western Australian Premier Mark McGowan has confirmed that masks will be mandatory throughout the lockdown period.

For those needing to leave their homes, people who work in indoor settings and on public transport, masks must be worn.

WA’s Chief Health Officer Dr Andrew Robertson said a rapid response was vital, particularly if the case in question was one of the more infectious strains.

Groundbreaking biofuel rocket could be 'Uber for space'