Owners should put SUNSCREEN on their cats and keep them indoors between 10am and 3pm on hot days to stop them losing their ears to sun burn, charity warns

Owners of white and pale-coloured cats have been warned to be extra-vigilant during hot weather as their pets are at additional risk of skin cancer, experts have warned.

Cats Protection has issued an alert following predictions by weather experts that this year will be one of the hottest on record. They recommend keeping cats indoors during the hottest parts of the day and treating vulnerable areas with sunscreen. 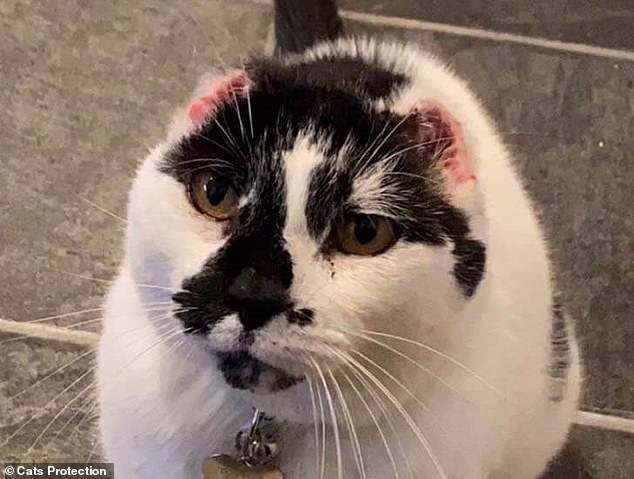 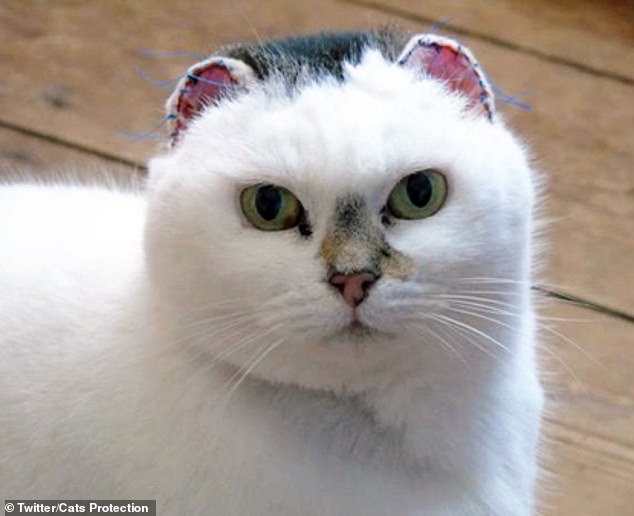 Strong sunlight can cause massive damage to the ears of light-coloured cats, such as Nancy, pictured,  due to the lack of melanin in their skin

She said: ‘We’re already seeing the effects of climate change across the country – 10 of our warmest summers on record have been since 2002 and heatwaves such as those seen in 2003 and 2018 are becoming much more likely.’

How to keep your cat safe in hot weather

Keep pet cats indoors when the sun is at its hottest, typically between 10am and 3pm.

Speak to a vet about suitable sunscreen for pet cats.

Provide plenty of opportunities for shade outdoors, such as cat hides, large cardboard boxes or plant plots placed close together.

Always provide an outdoor water source as there is a risk of your cat becoming dehydrated in the heat.

To stop cats feeling overheated, place a plastic bottle with frozen water inside a towel and place it in an area that the cat frequently visits.

Sarah Elliot, Central Veterinary Officer for Cats Protection warned: ‘White and pale-coloured cats don’t have a pigment called melanin in their skin, which is what protects humans from sunlight.

‘This can leave them vulnerable to sun damage – usually around the ears.

‘Over time, the damage caused by the sun’s ultraviolet rays can increase the risk of developing skin damage and cancer.

‘Cats with unpigmented noses or ears are also much more susceptible to sun damage and require additional sun protection.’

Each the charity deals with several cats which have suffered painful damage as a result of exposure to the sun.

Cats Protection has launched its awareness campaign this year because of the threat posed by climate change.

Commenting on the future weather prospects, Ms Rizzini said: ‘The UK’s highest temperature ever recorded was 38.70C at Cambridge Botanical Gardens on July 25, 2019.

‘However, the UK Met Office projects that heatwaves such as the one we saw in 2018 may well occur every other year by the time we get to 2050, and by 2070 summers could be up to 6C warmer.

‘Temperatures have already risen on average by a degree across central and eastern areas of England.

‘The slightly better news is that we could help to limit these changes by drastically reducing carbon emissions – but this will have to be done on a global scale according to the latest Intergovernmental Panel on Climate Change report released in April.

‘There’s still time to mitigate the effects of climate change but according to scientists it’s now or never.’

PlayOffs NBA 2022: This is the semifinals of the Playoffs Conference: Celtics and Warriors, to the assault of Giannis’s ring