You might be wondering what the connection is between Petr Cech — the Chelsea goalkeeping legend — and Gareth Ainsworth, manager of Championship Wycombe.

It is music, for one, but also a desire to see dementia in football properly tackled.

Cech suffered one of the game’s worst head injuries when, like Wolves’ Raul Jimenez last month, he fractured his skull against Reading in 2006 and required surgery. 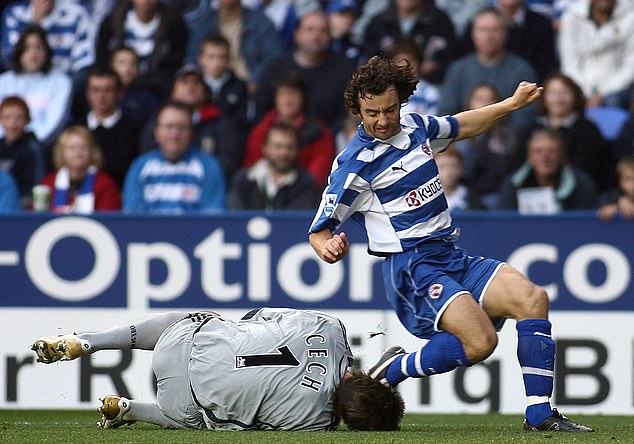 Ainsworth is a modern manager now wondering whether heading in training should be limited. Similar to Cech, his captain, Matt Bloomfield, now wears a protective headband in training and matches.

Together Cech and Ainsworth have produced a Christmas song called Drawing Straws, with any money made to be donated to dementia charities.

To their credit — and that of singer-songwriter Ian Wills — it is incredibly catchy.

Ainsworth sings, Cech plays drums, and the idea came from Chelsea’s director of football operations, David Barnard, in his guise as the band promoter.

CECH: Football is a contact sport. If you take away the contact, the energy, the tackles, the physicality, then it would not be the same.

But we can improve the way that injuries are dealt with. To have a substitute would take away the pressure to get the player back on the pitch.

If you have the right protocol, it might take six, seven, eight minutes but you are never allowed that. With the substitute, you are.

If it happens at the beginning of the game — like with Arsenal — the player would be available to the doctor without the team having to play for 10 minutes with 10 men. It’s unfortunate that you always wait for a tragedy to change rules.

When my incident happened, there was no ambulance on the ground, no paramedics, no equipment. Because of my injury, the equipment, the paramedics, the ambulance at stadiums becomes a must.

We should not wait for something bad to happen. We should try to prevent and help them. With the song, we wanted to reflect on this year and have fun with music. If on top of that, it brings awareness and help, then even better. 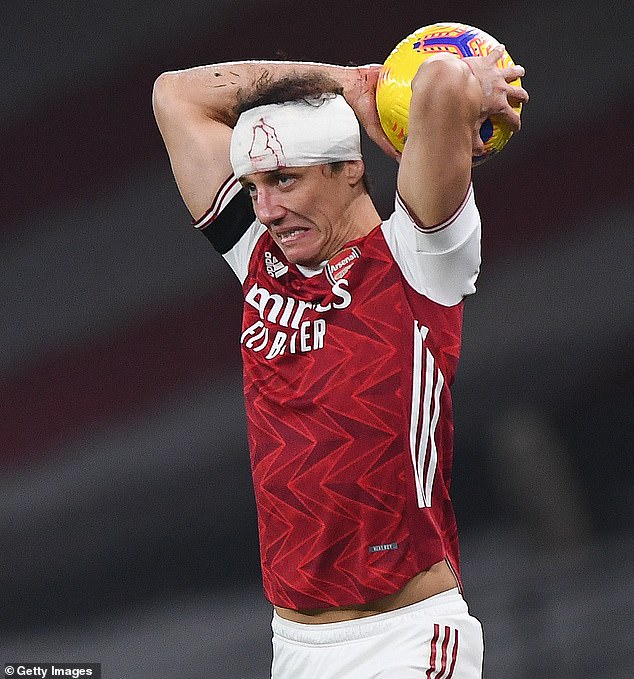 GILL: It was very uncomfortable watching Luiz play on until half-time at the Emirates Stadium.

CECH: When you see the bandage with the blood on, it looks bad and sometimes it can look worse than it is. But I was concussed a few times and I was never concussed in the first five or six minutes.

My concussion always had a delayed effect. After eight, 10, 12 minutes I might start to feel unwell. There was a game against Fulham in the League Cup in 2011.

I collided with a player. Even though I had my helmet on, my head went backwards. For 10 minutes I was fine, then for the next two minutes, I knew I had to go off. 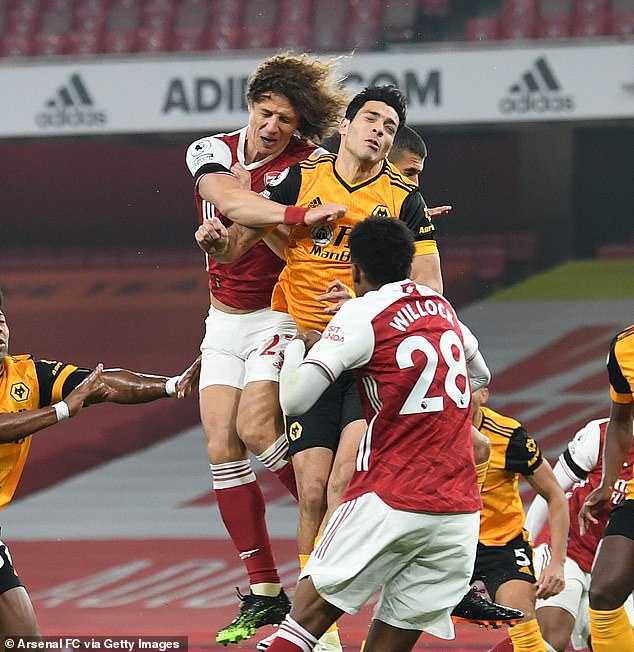 Luiz was involved in a clash of heads with Wolves striker Raul Jimenez, who fractured his skull

Sometimes the team and the doctor has limited time and for the first three or four minutes, the player is fine. No symptoms. That’s why the player stays on. But he can get worse. That’s the problem.

You can check the concussion protocol on the computer but it takes seven minutes. The player cannot sit out for seven minutes while their team is down to 10 men.

But the substitute takes that away. Somebody can come in, Luiz walks out, does the test which takes seven minutes. If he fails, he stays in the dressing room, the game carries on. If he’s fit to return, then the manager has the choice.

Clubs continue to practise heading and set-pieces across all divisions, though coaches question whether they should. Sportsmail have called for 20 headers a session and a minimum of 48 hours between sessions, along with increased funding from the FA and PFA. 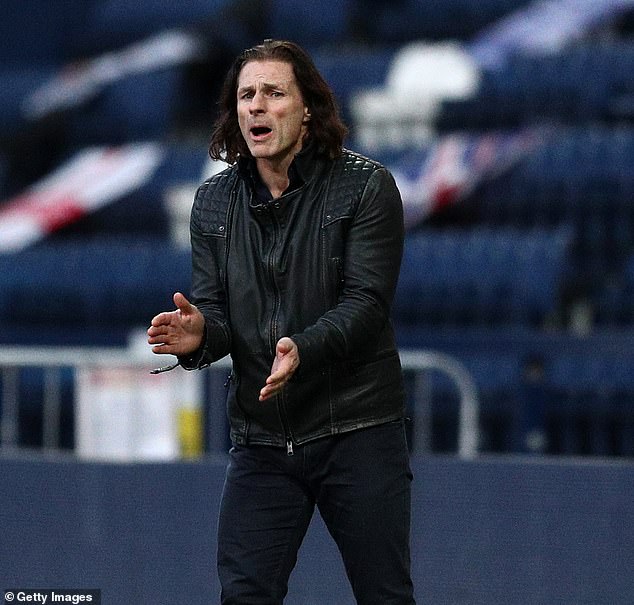 AINSWORTH: I need more research into this. I need more information. As managers, we’re doing crossing and finishing sessions in training. Am I doing the right thing? I’ve been concussed a couple of times in my career.

As Petr says, it is like a blackout for three seconds, then I’m back. I just need some information. We need some evidence of what we can do in training, how much the boys can do, computer tests which can hopefully filter down the leagues and we all have a concussion standard. At the moment, there are no guidelines. We’re waiting. A little guidance would be nice.

GILL: Like you, Petr, Rapid Vienna’s keeper Richard Strebinger wore headgear in their Europa League game against Arsenal. Would you recommend others wear one?

CECH: It was something I had to wear, because I had too much risk of getting concussion. Nobody could guarantee in case of any other impact my skull wouldn’t break again.

I had a really high risk playing without, and a lower risk with. I had a couple of concussions even playing with the helmet which makes you think the consequences could have been even worse. It would help but the players should have that choice. If you want to play with protection? Do it. 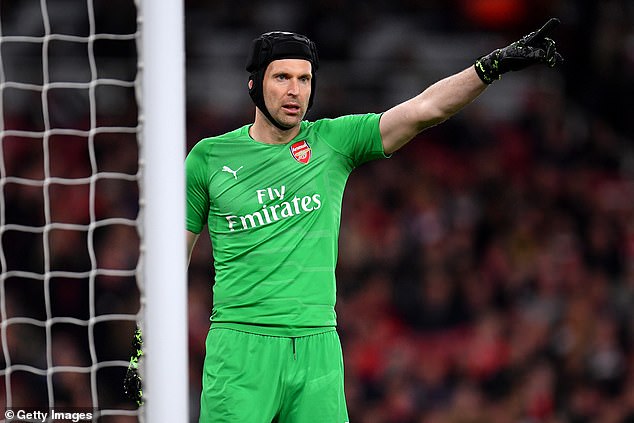 After the incident against Reading, Cech wore protective headgear for the rest of his career 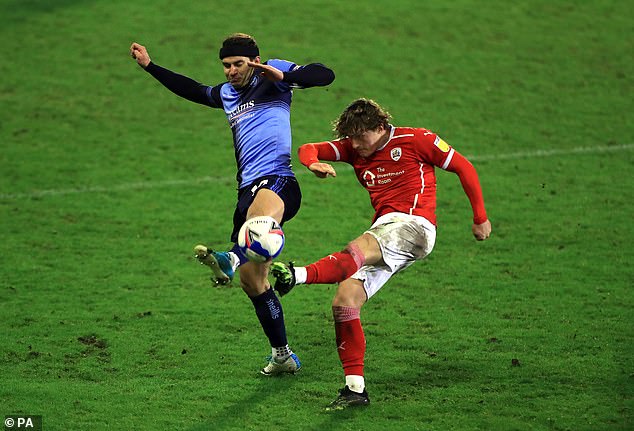 Ainsworth’s captain at Wycombe, Matt Bloomfield (left) has chosen to wear a headband

AINSWORTH: My club captain, Matt Bloomfield, is so committed. He had two serious concussions last year and if he’d had a third, his season would have been over. He took the option of wearing a headband. Every game, every training session, by choice.

CECH: Dementia is something you don’t see straight away. It might build up and build up. If there was any way we could contribute to help then we were happy to do that. Especially if it includes the ex- players who might suffer from it.

That is why any takings from Cech and Ainsworth’s song Drawing Straws — available for download now — are going to dementia charities. Barnard was Wimbledon chief executive for 13 years and signed Ainsworth in 1998 for £2 million from Port Vale.

The 47-year-old is now known as the leather jacket and snakeskin boot-wearing Wycombe boss. He did not take much convincing to provide vocals — nor Cech to do the drumming. 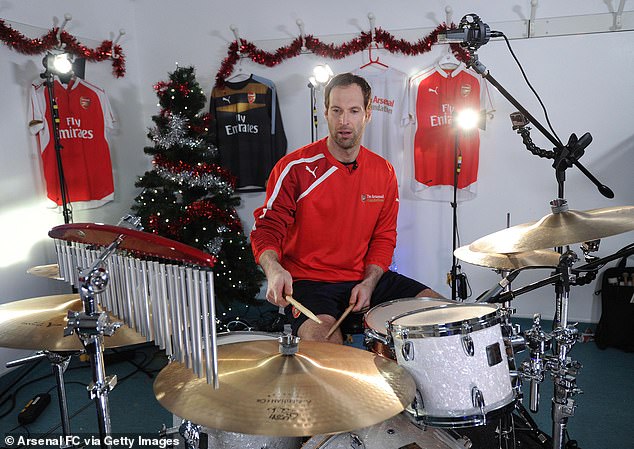 Cech, who plays the drums, teamed up with Ainsworth to release a song called Drawing Straws

AINSWORTH: I’ve played it at the training ground to the boys. They have very different tastes in music from me — believe me — and they’re singing along. When they found out it was me, there was a bit of banter. But the song itself was a memento of this period. Almost a keepsake of this year.

CECH: It reflects on the times we are living in. The writer Ian Wills has that ability to capture certain moments of the time. The song is going to keep this year in the archive. The beauty of being a drummer and a goalkeeper is you have the same responsibility almost. If you drop the ball it’s a goal. If you drop the stick the whole gig goes!

AINSWORTH: Wimbledon was my introduction to music. Trond Andersen, a guy from Norway who was a great guitarist, and Chris Perry played drums.

So we formed our own band and luckily, since 1998, I’ve been in bands right up to now. My first meeting with Ian was through Dave, more than a decade ago, at a festival in Guildford.

I met Ian in a BBQ area for the artists backstage and in the same queue for the burgers was Debbie Harry. Surreal. I met Ian and Blondie at the same time. Ian’s kept in touch. Blondie didn’t seem to fancy it.

All profits are going to Alzheimer’s Society’s Sport United Against Dementia, which aims to shine a light on dementia and spearhead change in the industry.

Ellen DeGeneres, 62, curls up with her dog after revealing positive COVID-19 diagnosis

What Is Blaseball? Developers Answer as Game Enters New Era

Cyber Weekend 2020: The best deals you can get at Best Buy