There have been a number of standout performers across the campaign but who will be crowned the PFA’s Player of the Year?

So did USA international Sam Mewis make a big impression? Will England’s Chloe Kelly claim it, or were Chelsea duo Fran Kirby and Sam Kerr just too good?

WSL players will vote for their winner but meanwhile the BBC pundits have had their say, and you can have a read and vote for yours from their selected shortlist below.

If you are viewing this page on the BBC News app please click here to vote.

Kirby has been the difference between Chelsea and Manchester City. She has been clinical in front of goal and her partnership with Kerr has been very impressive.

When Chelsea brought Kerr, then added Pernille Harder last summer, many assumed – me included – that Kirby, who missed the majority of the 2019-20 season with a virus, would have to accept secondary status at Chelsea. I remember there was even talk of her being sold to make way for Chelsea’s new-look attack…

Kirby not only fought her way into the Chelsea team, she has been their star player.

She is coming into her prime at 27 and is making up for lost time after a long spell on the sidelines last season. Kirby has 16 goals and 11 assists in the WSL this season – only Kerr, with 28, has more goal contributions in that competition, and their partnership is a huge reason why Chelsea have been so dominant this season.

It rightfully took Kerr some time to settle into the team but it’s been Kirby who has brought the best out of the Australian and can take a lot of the credit for Kerr’s Golden Boot award.

Kirby has been the WSL’s best player on merit, which is incredible when you consider that 18 months ago she wasn’t fit enough to climb the stairs due to pericarditis. It’s been a delight watching her make her comeback and be the best player in the league.

I’d usually skirt around some of the other options but ultimately I think Kirby is the way-out winner. 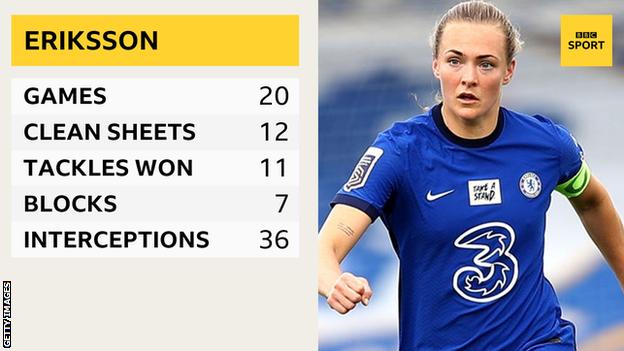 I thought about Kerr, Mewis and obviously Kirby but – and it pains me to say it as an attacking player – I’m going to pick defenders in both the men’s and the women’s categories this year.

I played with Magdalena Eriksson and people may have only seen just how impactful she is in those two games that she missed for Chelsea against Manchester City and Bayern Munich.

She’s the best centre-back in Europe. She is left-footed and left-sided, which is rare. She is quick, strong and good in the air. She has an unbelievable winning mentality, her positional intelligence is very good, she mops up and covers very well and I think her organisational and motivational skills are very good. Eriksson has it all.

The reason I’ve picked Eriksson is that while goals win you games, clean sheets win you titles. You have to have a strong foundation. When she wasn’t in the team, Chelsea were not the same.

Kirby has been unbelievable and probably will win it. She is a joke how good she has been. But I see the impact Eriksson has on the whole team. She makes the players around her better. Kelly and Lauren Hemp have been brilliant young players this season too.

What Kirby has had to overcome in terms of her injuries and illness, and to come back as strong as she has, is one of the reasons why I’ve chosen her. She’s been key in all of the games. The understanding and relationship she has with Kerr is brilliant to watch.

She has picked up assists and goals, and her all-round play is consistently high. I don’t think you can look past Kirby. Every game I’ve watched that she has played in, she has been my player of the match. You always think something can happen when she gets on the ball. She has that spark about her.

When you need somebody to step up and do something, it’s Kirby that you look to. Chelsea have a team full of quality players but she has been brilliant. It’s great for Chelsea and it’s great for England. I think this has been her best season. You can tell she is enjoying it and feeling good so her performances on the pitch have shown that.

It will be interesting to know if she has done some work on her mentality because it is really strong. Sometimes when you’ve been out through injury or illness, you just really enjoy being able to play again. She has a smile on her face and when that happens, she plays well. She can focus on her football and she has the belief in herself and those around her that they can achieve something.

She is as selfless as she is ruthless. Kirby is not what you would consider to be as a normal forward who focuses solely on scoring – she is so appreciative of those around her.

There’s something so driven about her. She is all about the team which is so valuable. Kirby will always try to score goals but she knows if she puts the ball into certain positions, Kerr or Harder have the quality to get on the end of it.

You have to have those players in the team willing to sacrifice some of their goalscoring output for others. 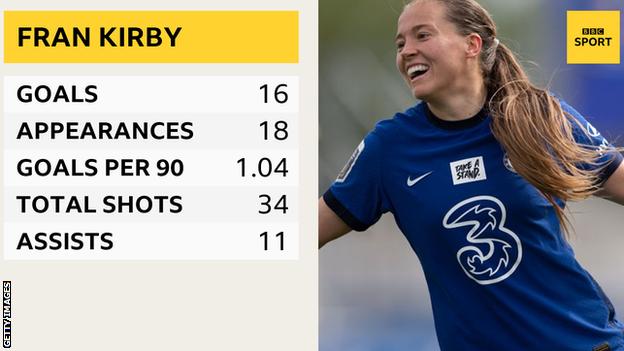 I’ve chosen Kirby simply for her consistency in the big games.

I found this tough to choose between Kirby and Kerr. They each have their unique stories this season and both would be worthy winners of the award.

But I think Kirby pips Kerr because she has developed into the complete player. Kirby has worked hard at developing her attacking abilities over the years but now she seems to have the defensive focus, creative genius and the ruthlessness in front of goal.

She has been an absolute dream to watch.

I also considered Chelsea goalkeeper Ann-Katrin Berger, Arsenal defender Katie McCabe and City’s Kelly but I had to go with Kirby in the end.

And the winner is…

Fran Kirby wins with seven votes – will the Women’s Super League players agree with our pundits?

People share the worst of LinkedIn, from 'humble brags' about money to cringe-worthy speeches

England suffer further blow ahead of this year's Ashes with Olly Stone ruled out for the...