BREAKING NEWS: Pfizer will only ship 50 million doses of its coronavirus vaccine worldwide – HALF as many as promised – by the end of 2020 after running into supply chain problems

Pfizer will only be able to ship half as many doses of its coronavirus vaccine as it promised by the end of the year, cutting its planned global rollout from 100 million to 50 million doses, sources told the Wall Street Journal.

The company had to walk back its plan due to slowdowns in its supply chain.

‘And it’s important to highlight that the outcome of the clinical trial was somewhat later than the initial projection.’

Pfizer’s vaccine was given temporary approval by UK regulators on Wednesday, and is expected to get emergency use authorization from the U.S. Food and Drug Administration following the agency’s December 10 meeting.

The UK ordered 40 million doses of Pfizer’s vaccine, with the expectation it could vaccinate 10 million people by year-end. That number will now likely be closer to five million.

Operation Warp Speed, the U.S. vaccine initiative, expected to have 40 million doses – enough to inoculate 20 million people with each of the two-dose shots – in total from both Pfizer and Moderna by the end of the year.

Now, the U.S. will likely get just 10 million doses of Pfizer’s vaccine next month. It is unclear whether Moderna’s supply chain will be affected.

It’s a second sobering blow to the American coronavirus struggle in 24 hours as the U.S recorded its highest single-day death toll of 2,804 on Tuesday. 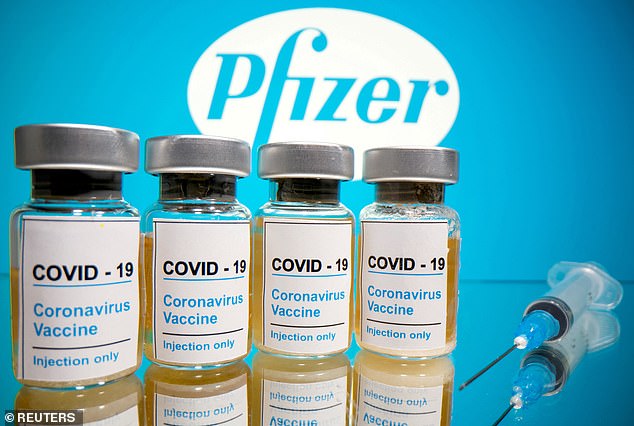 Immunisation experts are divided on whether Covid-19 vaccine is safe