Public Health England was reassuring politicians that the UK was not set for France-style coronavirus spike even as SAGE prepared to back a ‘circuit breaker’ lockdown , it can be revealed.

The assessment was given by the deputy head of the Emergency Response Department at the key body as he briefed senior peers.

Minutes from the meeting on September 15 show that Dr Nick Gent insisted the UK was ‘on the same trajectory as Germany‘ – which has seen a substantial rise in cases, but far lower than many other European countries.

However, the views contrast sharply with the position being developed by the government’s SAGE experts at the same time, even though that includes a slew of PHE’s own officials.

By September 21 the scientists were demanding the government imposes a ‘circuit breaker’ lockdown, cautioning that cases could be doubling every seven days. 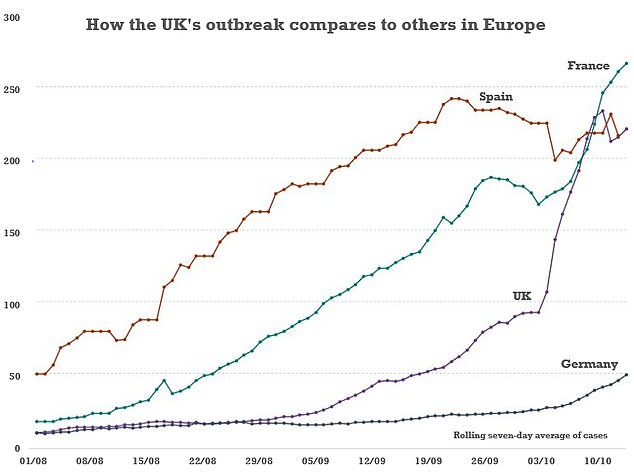 That same day medical and science chiefs Chris Whitty and Patrick Vallance told a briefing that the UK might have 50,000 cases a day by mid-October.

A PHE spokesman said: ‘Advice was given at the time which was in line with the pandemic and what was seen across the continent.’

Although the most drastic estimates have not been borne out, the PHE stance will raise further questions about its role in the crisis. The body is being replace by a new organisation headed by testing tsar Dido Harding.

It also underlines the difficulties for ministers in balancing different assessments from scientists.

By September 15 the UK seven-day rolling average of cases was tracking at more than double that of Germany.

The UK rate is now four times that in Germany, and close to the levels in Spain and France.

Dr Gent gave an update to a meeting of the ruling Lords Commission, including the Lord Speaker and other senior peers, along with Professor Virginia Murray, Senior Public Health Adviser and Head of Global Disaster Risk Reduction.

He cautioned that there was no reason to believe the disease had become less virulent, and the lower level of deaths was likely down to younger people being less vulnerable.

But he also said that ‘international comparisons suggested that the UK was on the same trajectory as Germany and would not see the same significant increase as France and Spain.’ 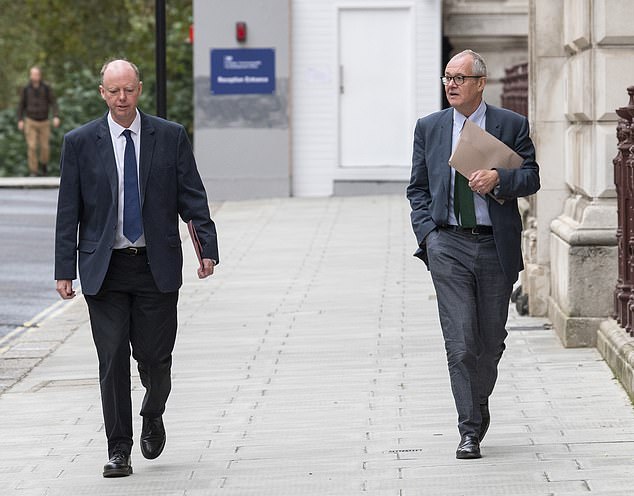 On September 21 medical and science chiefs Chris Whitty and Patrick Vallance (pictured left and right yesterday) told a briefing that the UK might have 50,000 cases a day by mid-October