Sarver – who is being investigated by the NBA for alleged sexist and racist behavior – spent the bulk of his nearly 10-minute speech detailing the sex life of Heckmann, who died last year at age 76 from Parkinson’s disease complications.

‘Dick was chasing everything that moved in Scottsdale,’ Sarver told attendees. ‘Someone said he left his DNA. He did leave his DNA in Steve Nash’s sock somewhere in the locker room. That was about the third week after we bought the team.’

Sarver did more than share salacious stories about Heckmann – he also threw his sons under the bus as he described the months after his group bought the team in 2004.

‘My biggest concerns were ticket sales, sponsorship revenue, trying to sign some players, getting a winning record,’ he said. ‘What I really know is my biggest concern was the Heckmann boys were f***ing their way through the cheerleading team.’ 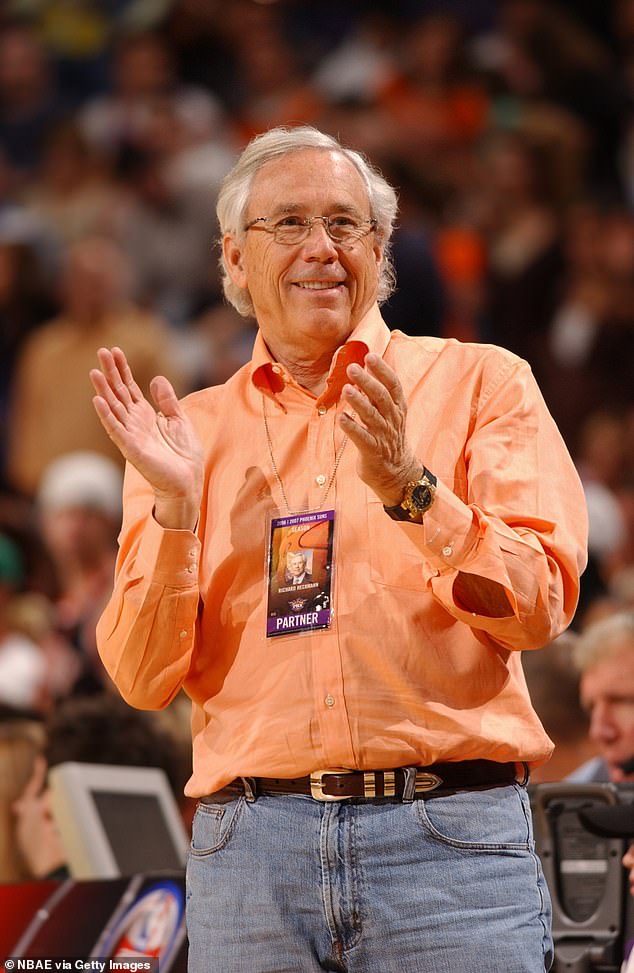 Sarver made the comments in April during a roast-style memorial for Heckmann hosted by wife Wendy.

Although excerpts of Sarver’s tribute commentary were previously reported, a video containing his entire speech was first published Tuesday by Sports Illustrated.

Wendy Heckmann had thrown the event to honor her late husband through jokes at his expense.

‘This is a roast and I just want to say that no one in this room is safe,’ she said when introducing the event. ‘This is what Dick Heckmann wanted. He did not want any tears, he wanted laughter, he wanted joy, he wanted everyone to laugh at his funny Dick-isms.’

During his speech, Sarver also spoke about Heckmann’s insatiable sexual appetite, recalling how his friend bragged about having ‘sex 10 times in a day – unmedicated.’

Sarver said he later learned that Heckmann was referring to 10 thrusts per day. 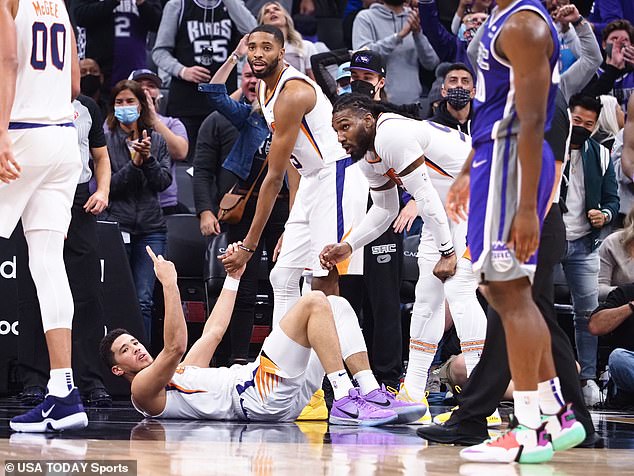 After Sarver and Heckmann bought the team in 2004, Heckmann’s sons were were f***ing their way through the cheerleading team,’ Sarver claimed 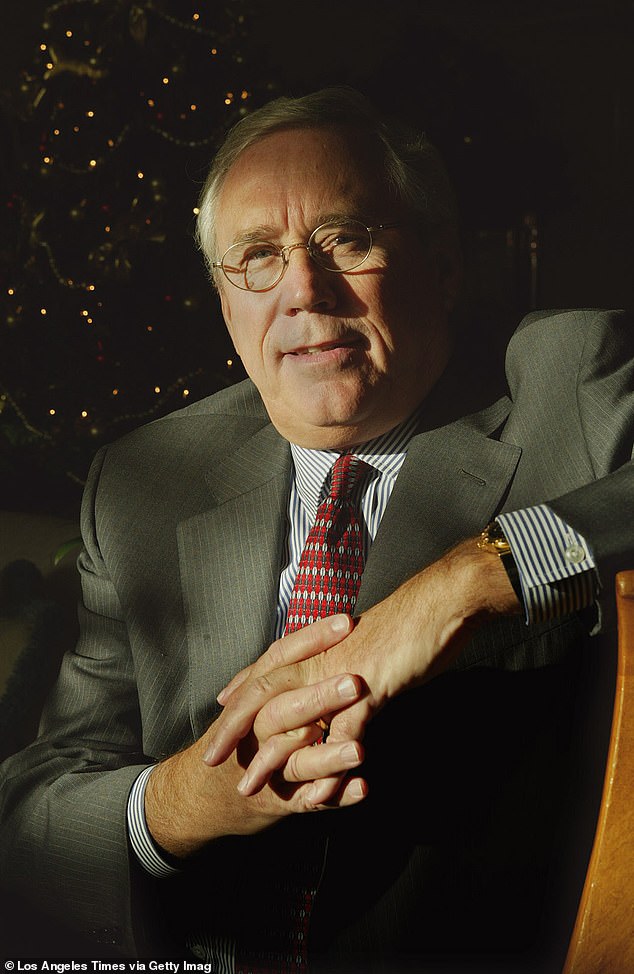 Sarver also spoke about Heckmann’s (pictured) insatiable sexual appetite, recalling how his friend bragged about having ‘sex 10 times in a day – unmedicated’

The video emerged as the NBA investigates Sarver over allegations made against him in a recently-published ESPN expose.

The bombshell report said Sarver made misogynistic comments to female subordinates — once asking ‘do I own you?’ — and frequently used the n-word.

The article detailed allegations of racism and sexism from more than 70 current and former employees. 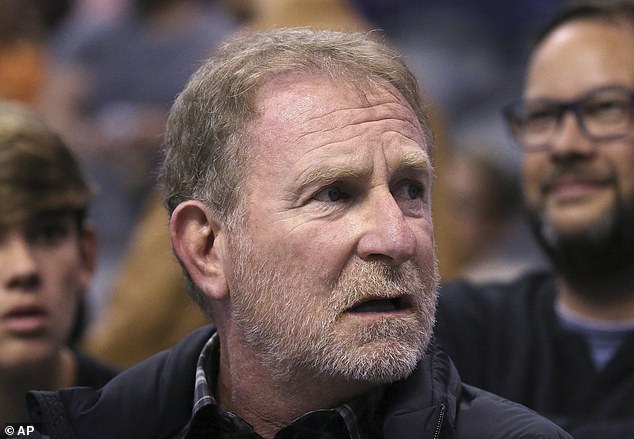 ‘There’s literally nothing you could tell me about him from a misogynistic or race standpoint that would surprise me,’ said a former Suns executive.

Of those who spoke to ESPN, mostly on the condition of anonymity, nearly a dozen say they’ve sought professional help for issues such as anxiety and sleep loss due to the working conditions, which were exacerbated by Sarver’s frequent verbal abuse. One person said they contemplated suicide.

The league is launching an investigation into the claims against Sarver, who also owns the WNBA’s Phoenix Mercury. The probe will be conducted by the Wachtell Lipton law firm.

‘The allegations contained in today’s ESPN article are extremely serious,’ league spokesman Mike Bass said in statement. ‘Once the investigation is completed, its findings will provide the basis for any league action.’ 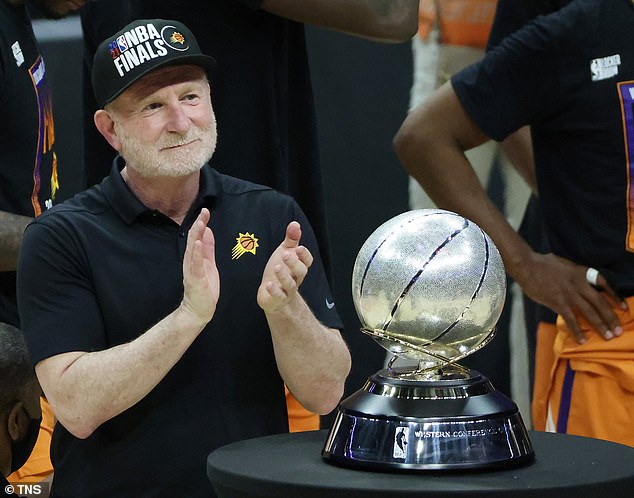 Sarver, 60, was accused by former Suns coach Earl Watson of using the n-word to complain in 2016 that Golden State Warriors forward Draymond Green had used the term on the court.

‘You can’t say that,’ said Watson, who is Hispanic and black.

Sarver only admitted to using the n-word once, years earlier.

‘On one occasion a player used the n-word to describe the importance of having each others’ back,’ the NBA team owner told ESPN through his attorneys. ‘I responded by saying, ”I wouldn’t say n***a, I would say that we’re in the foxhole together.”‘

‘An assistant coach approached me a short time after and told me that I shouldn’t say the word, even if I were quoting someone else. I immediately apologized and haven’t said it ever again. The n-word has never been a part of my vocabulary.’

Sarver also disputed having that alleged conversation with Watson, who now works as a Toronto Raptors assistant coach after being fired from Phoenix in 2017.

‘Let me be crystal clear: I never once suggested on that night (or ever) that I should be able to say the n-word because a player or a black person uses it,’ Sarver said through his attorneys.

Paul McCartney, 79, is joined by daughter Mary, 52, at premiere of documentary The Beatles: Get Back