Photo contest: The stunning winners of the Aerial Photography Awards 2020

The Aerial Photography Awards invited photographers from around the world to submit their best photos – using drones, helicopters, kites, balloons, or airplanes – to win $10,000 ($7,663).

And it’s clear the entrants pulled out all the stops.

The competition, promoted via photopublicity.com, received thousands of entries from 65 participating countries, with 106 pictures commended in some way.

The grand prize winner, though, was Belgium’s Sebastien Nagy, who was declared Aerial Photographer of the Year 2020.

He remarked after receiving this award: ‘To be honest, I had never participated in a contest before, but I had heard about this one in a very positive way, so I took part in the game. I didn’t think I would win anything and it was mostly for fun. So I was very surprised when I heard the good news. It was a bit hard to believe at first as it was the Grand-Prix, but I did feel a real joy and pride.’ 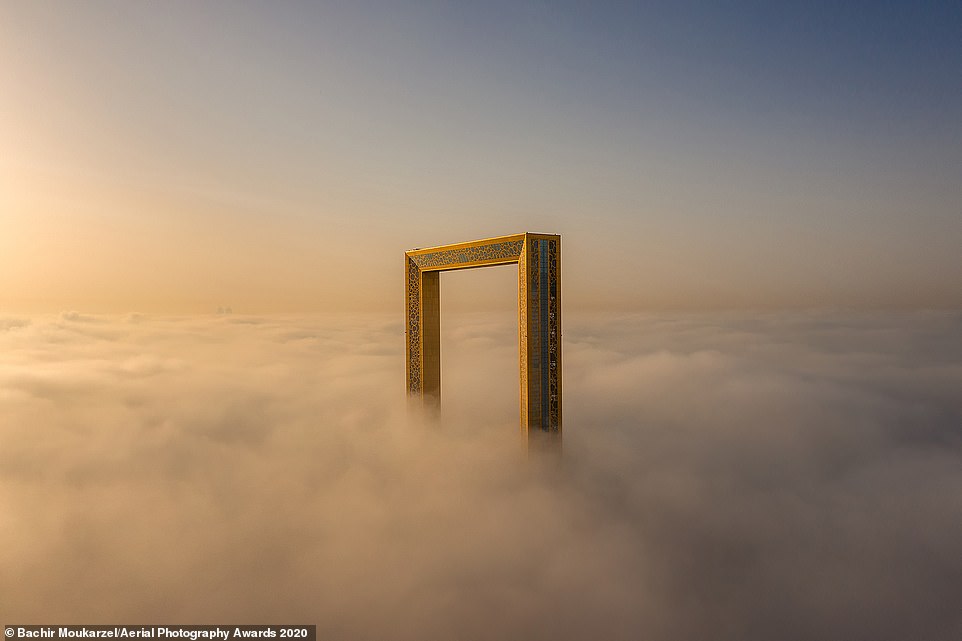 In the Constructions category, first prize went to Lebanese photographer Bachir Moukarzel for this stunning photograph of the 492ft-tall Dubai Frame, known as ‘the largest photo frame in the world’ 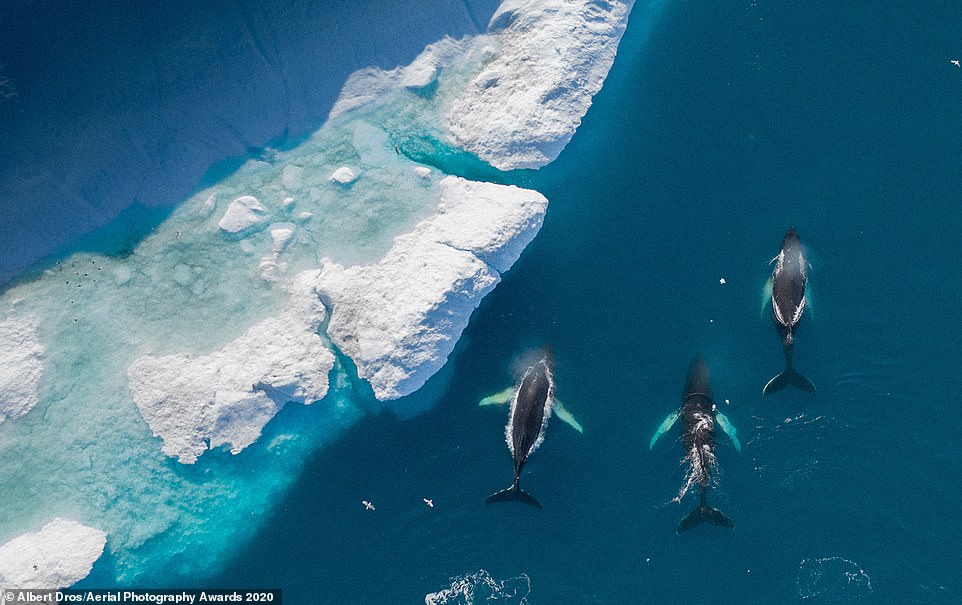 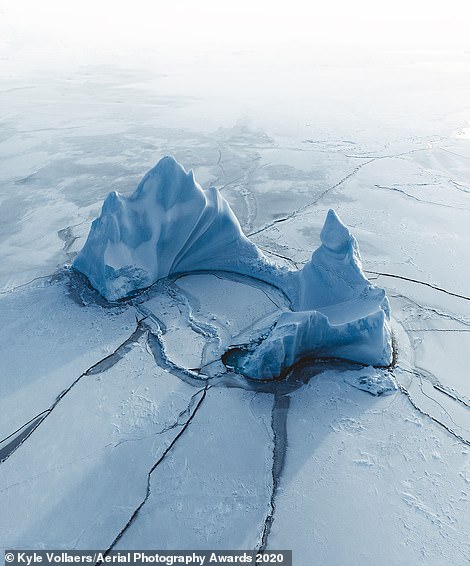 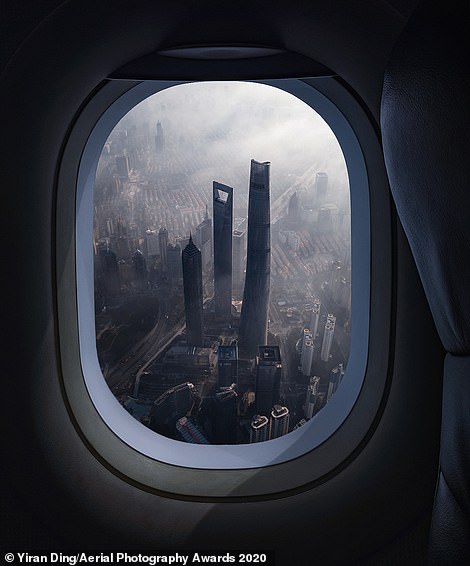 LEFT: This incredible image of an iceberg drifting off the coast of Qeqertarsuaq, Greenland, snared UK photographer Kyle Vollaers first prize in the Waterscapes category. He said: ‘It’s one of the most beautiful yet abstract places I’ve ever seen.’ RIGHT: Chinese photographer Yiran Ding and his photo of Shanghai seen through an airplane window claimed first prize in the Travel category 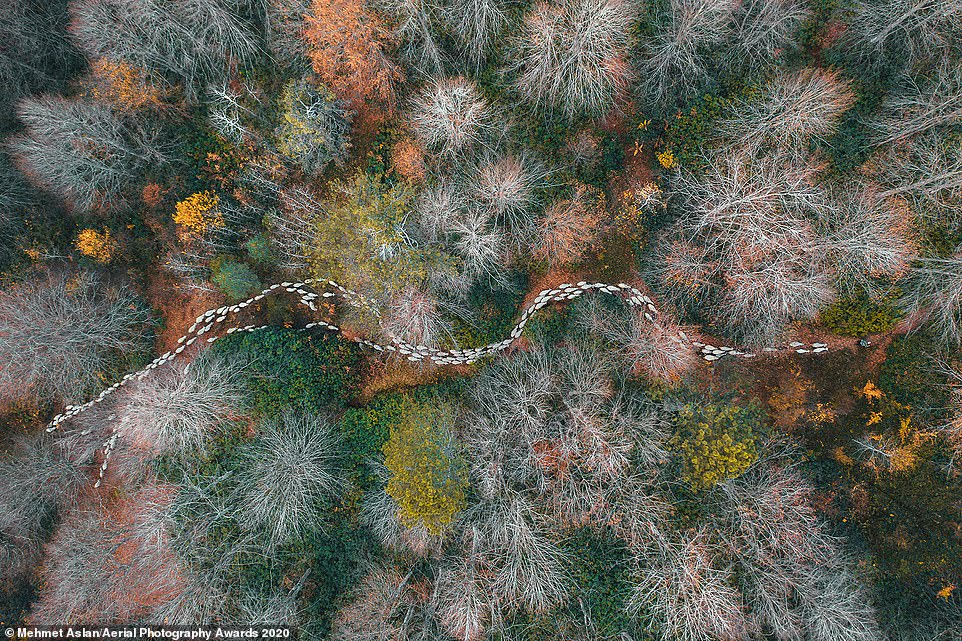 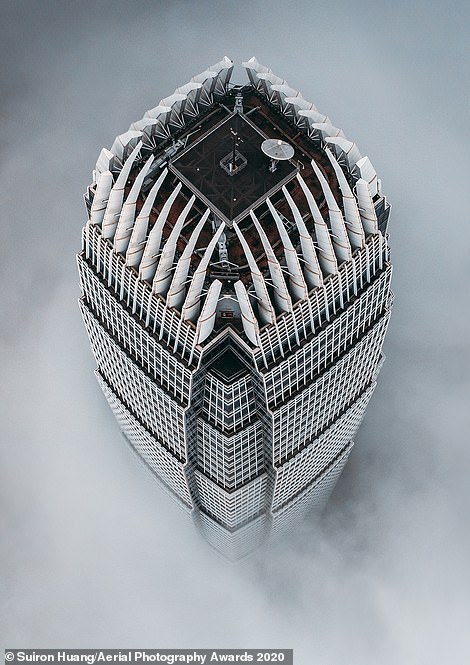 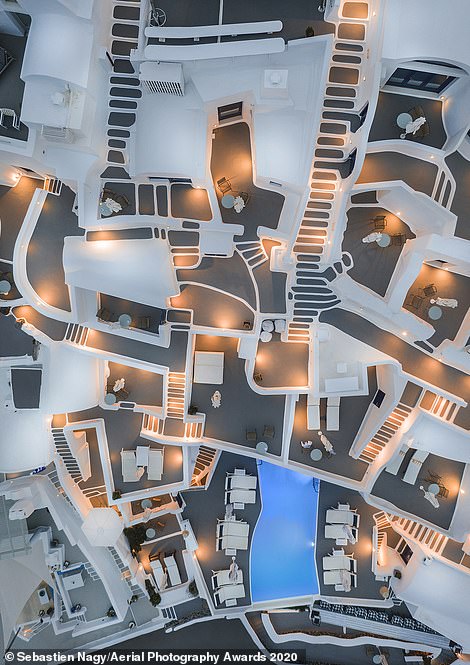 LEFT: This jaw-dropping drone shot is of one of the most iconic towers in Hong Kong, the International Finance Centre, which stands at a height of 415m (1,361ft). Photographer Suiron Huang said: ‘I captured this shot during the low altitude sea of clouds season which only happens once a year. I chose this angle to emphasise the architectural character of this tower to make it look like an angry claw punching through the soft clouds.’ RIGHT: This hypnotic drone image was taken by Belgian photographer Sebastien Nagy, named Aerial Photographer of the Year 2020 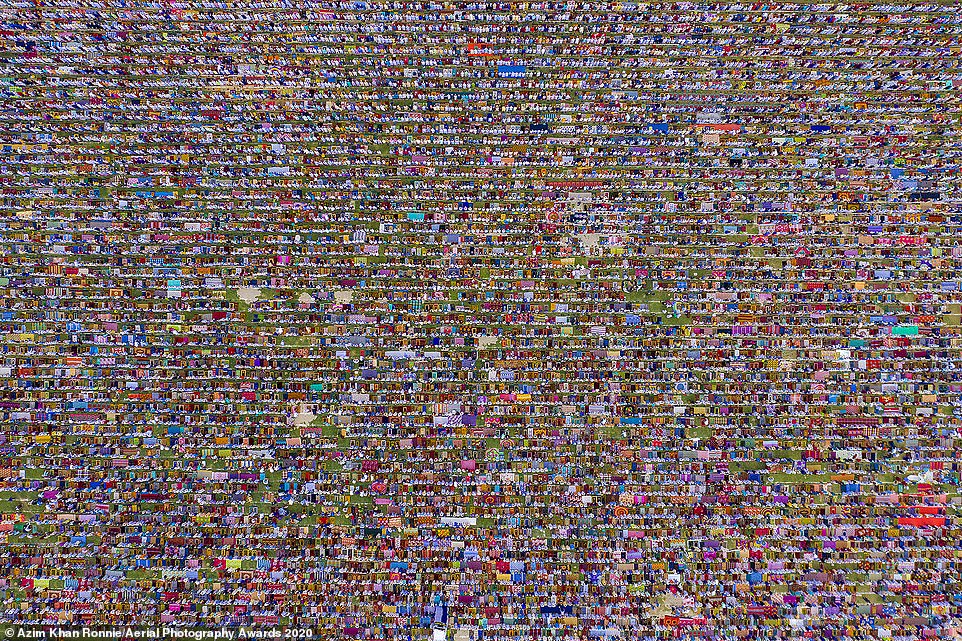 The World Culture category winner is this photo by Bangladeshi photographer Azim Khan Ronnie of 60,000 devotees participating in the Eid-ul-Fitr in Gor-e-Shahid Boro Math, Dinajpur, Bangladesh. Eid-ul-Fitr is a ‘Muslim festival of happiness’ that’s celebrated all over the world 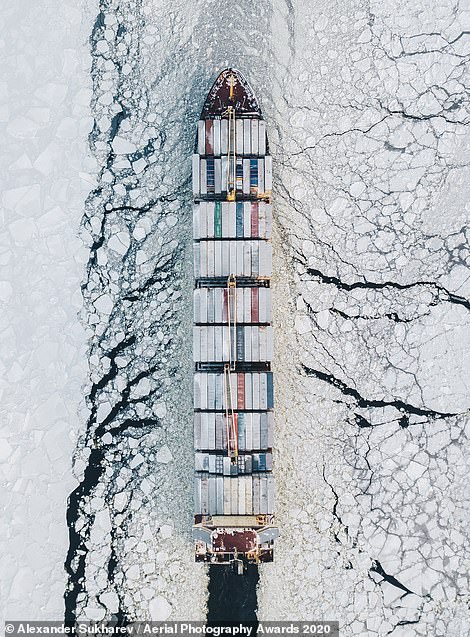 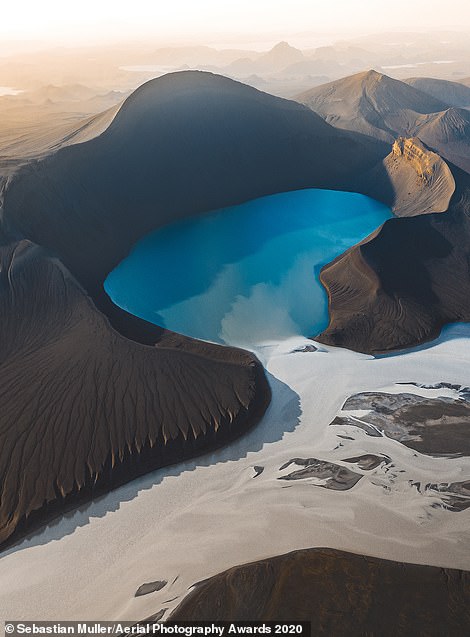 LEFT: This amazing picture was taken by Alexander Sukhare​v by drone in the Gulf of Finland. RIGHT: This drone picture taken in the Highlands of Iceland by Sebastian Muller wowed the judges 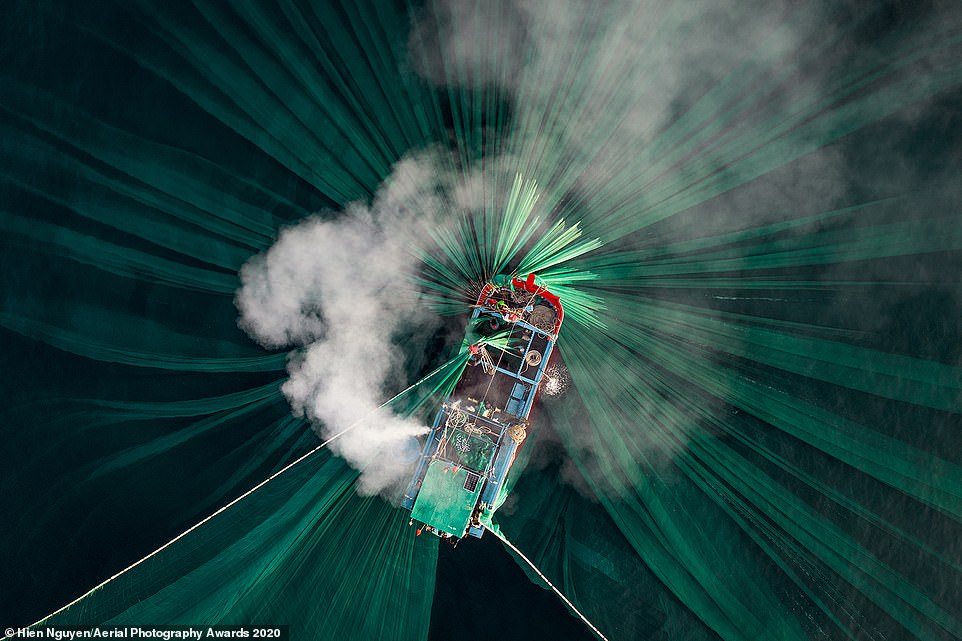 Vietnamese photographer Hien Nguyen was named Aerial Photographer of the Year 2020 in the People category after submitting this stunning shot. It shows smoke pouring from the engine of a boat belonging to anchovy fishermen on the Phu Yen coastline, with their green nets illuminated under the water 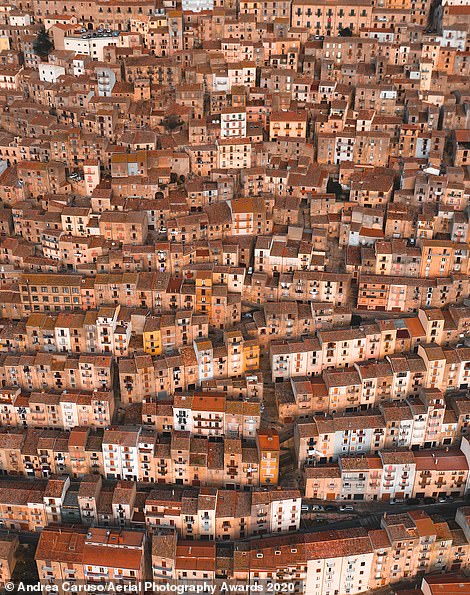 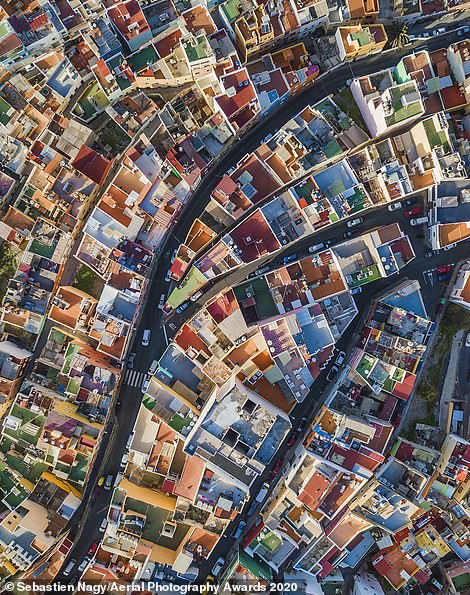 LEFT: This breathtaking drone image of Gangi in Sicily was taken by Andrea Caruso. RIGHT: The colourful roofs of Las Palmas de Gran Canaria, captured in a shot by Sebastien Nagy that compelled the judges to award it first prize in the Cityscapes category 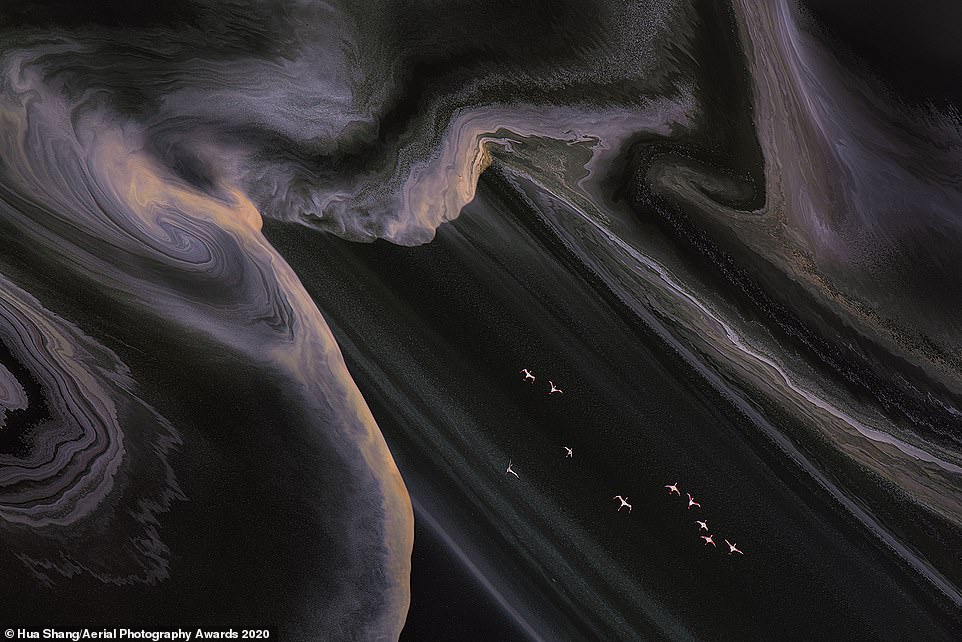 A stunning shot of flamingos flying over Lake Natron in Kenya by Chinese photographer Hua Shang. He was named runner-up in the Nature category 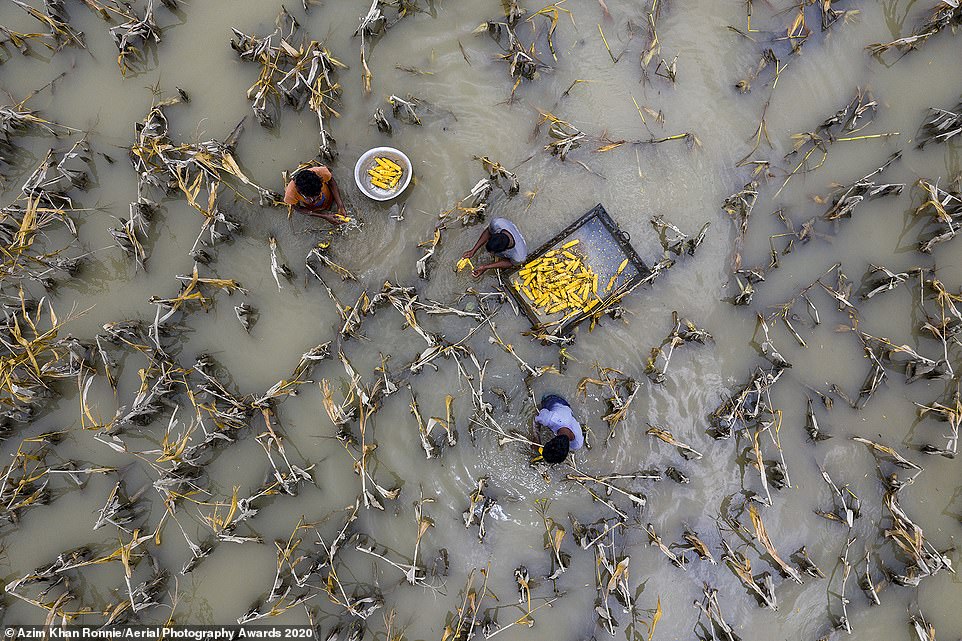 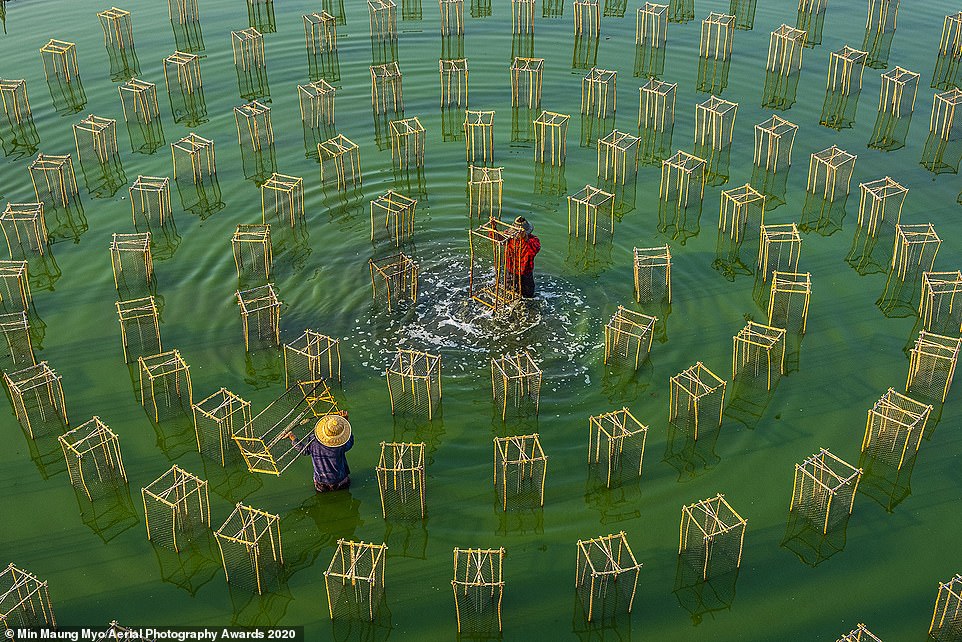 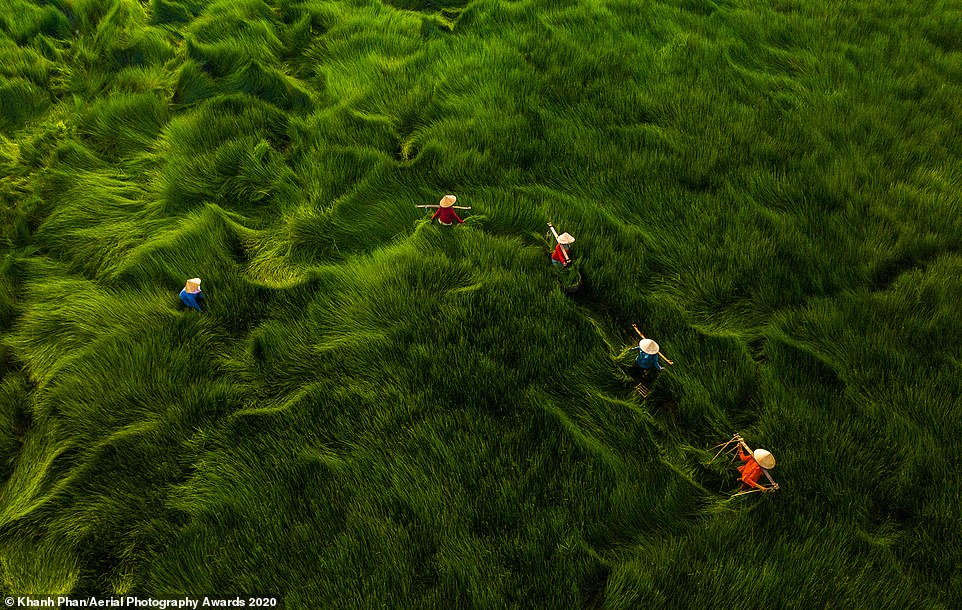 In this mesmerising image by Khanh Phan a field of grass with leaves over one metre high in Vietnam looks like waves. According to the photographer, the field is home to snakes, frogs and fish, with the grass cut to feed cattle 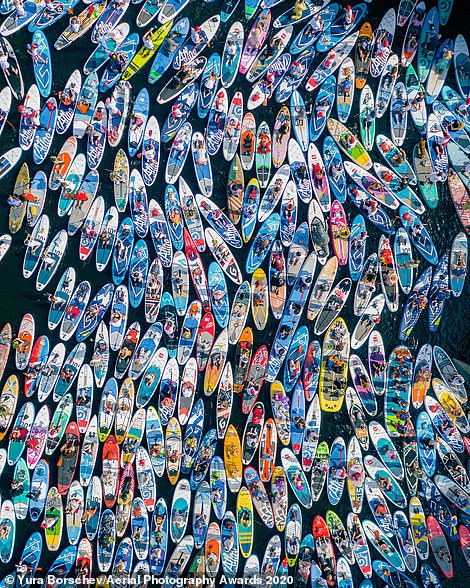 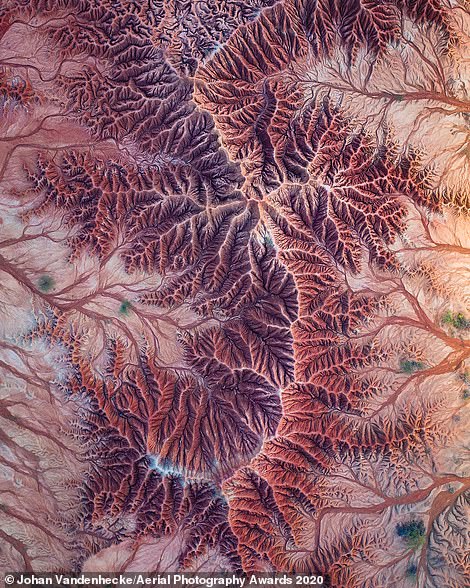 LEFT: An amazing picture taken by Yura Borschev using a drone of the Supsurf festival in Saint Petersburg. RIGHT: A stunning top-down view of the rock formations of Colombia’s Tatacoa Desert at sunset by Belgian photographer Johan Vandenhecke. The image was the winner in the Abstract category 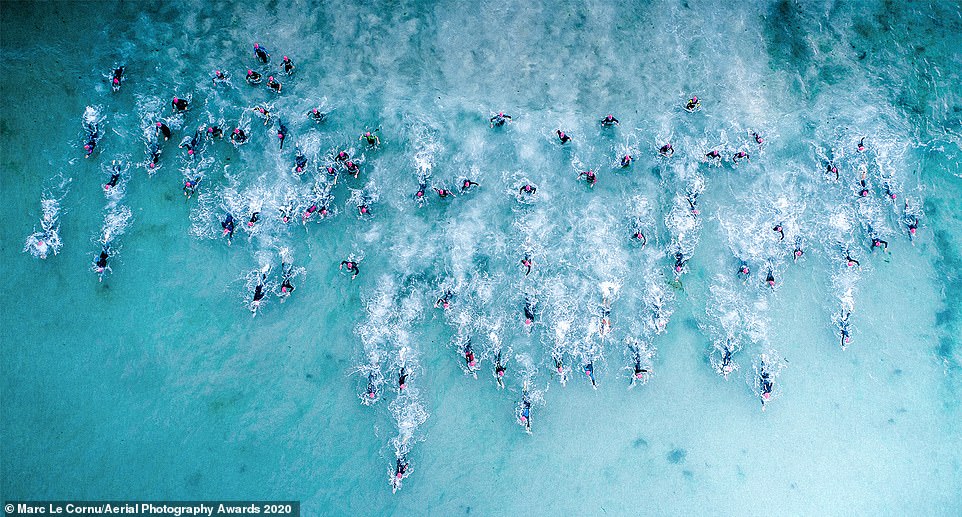 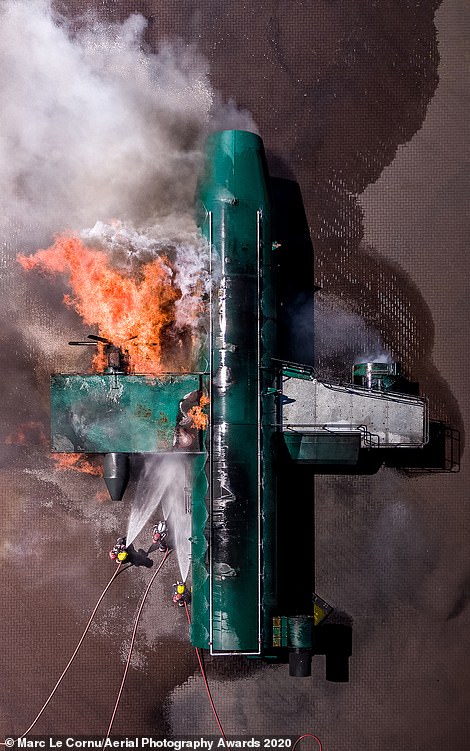 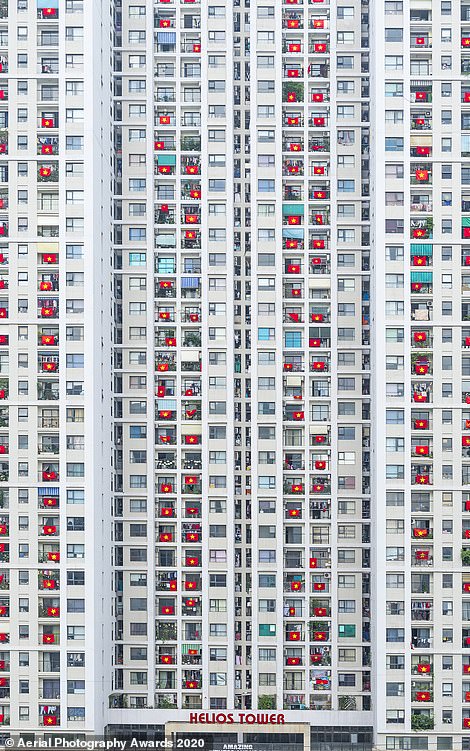 LEFT: In the Documentary category, photographer Marc Le Cornu took home first prize with this photo of the Jersey Airport Rescue & Firefighting Service training on a burning plane. He said: ‘These live-fire scenarios are designed to ensure the crews are fully skilled and ready should a real incident occur.’ RIGHT: This was one of the images picked out by judges in the World in Lockdown category. It was taken by Indian photographer Prabu Mohan, who said: ‘It is a residential apartment near my home [in Vietnam]. The residents hang the Vietnam national flags in support of those who are fighting against Coronavirus in the front lines’ 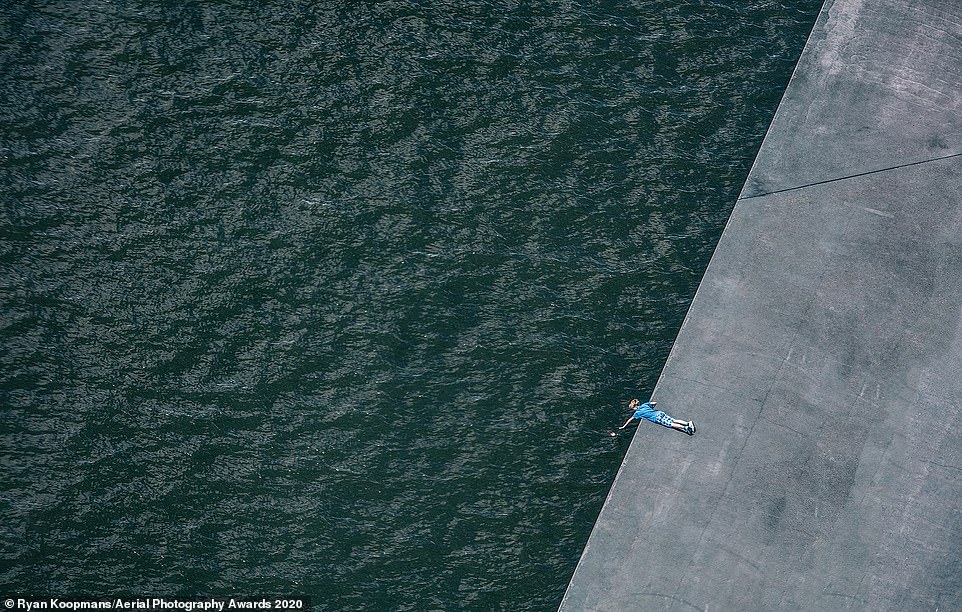 A child reaches for a plastic bag that has fallen into the Amstel River in Amsterdam. A hypnotic image by Canadian photographer Ryan Koopmans

In the Patterns category, this photo of multiple umbrellas crossing each other in the streets, taken by Japanese photographer Daniel Bonte, won the first prize

Covid in Scotland: Hospitality curbs extended for another week