The 39-year-old pop star is set to address the Los Angeles court on Wednesday, June 23, regarding her ongoing conservatorship and the control her father Jamie has over her $60million fortune.

Spears, seemingly accompanied by a bodyguard, was wrapped up in a grey longline cardigan for her Sheriff’s department visit. 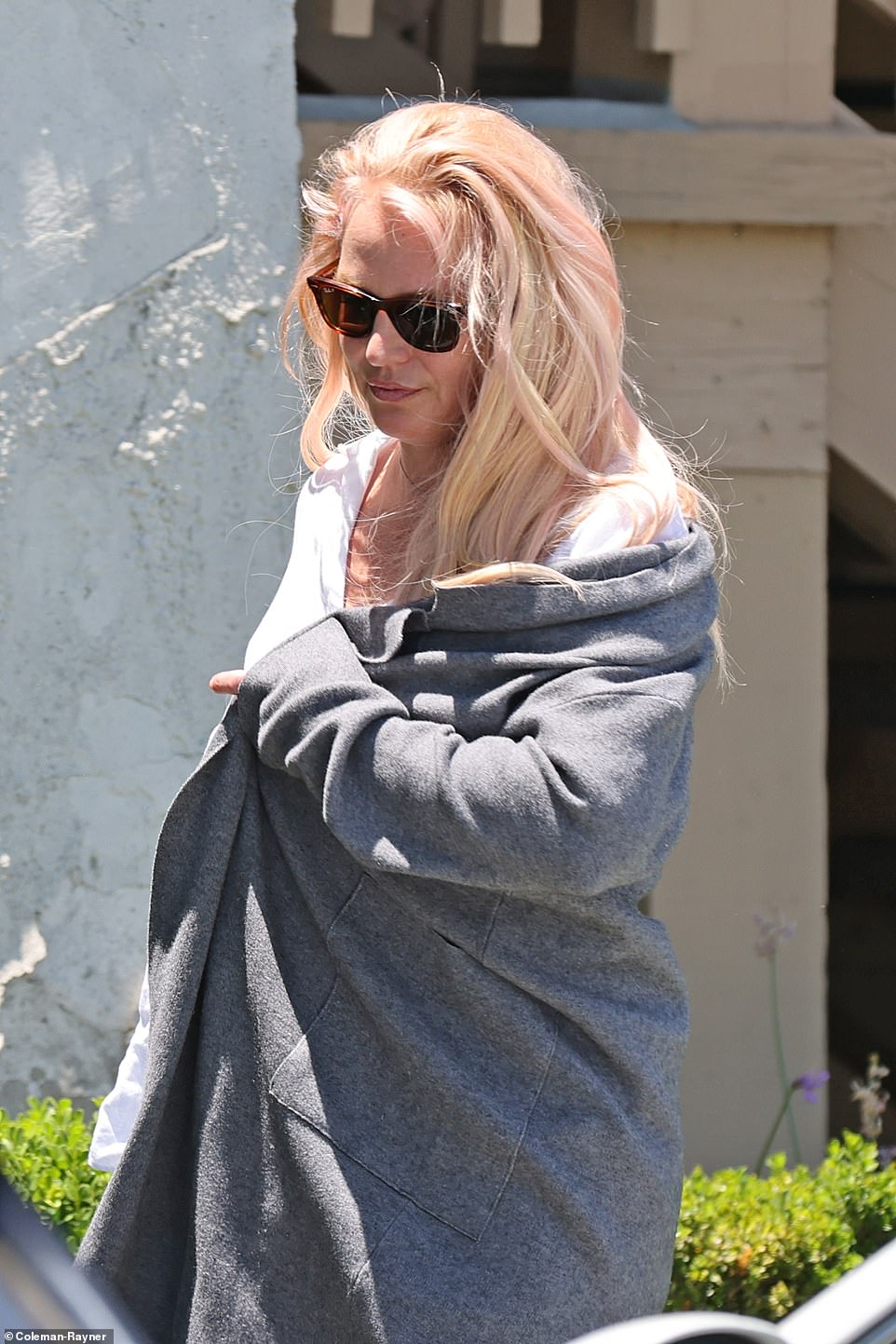 Court hearing: The 39-year-old pop star is set to address the court on Wednesday, June 23, regarding her conservatorship and the control her father Jamie has over her $60million fortun

The Toxic hitmaker layered the cardigan over a crinkled white button up shirt and a pair of pale blue linen shorts.

Britney strolled around in a pair of open-toed platform heels.

She arrived to the Sheriff’s department with her long blonde hair down, before exiting with it styled into a messy bun.

Britney’s complexion looked noticeably devoid of makeup and she concealed her brown eyes behind a pair of tortoise shell shades. 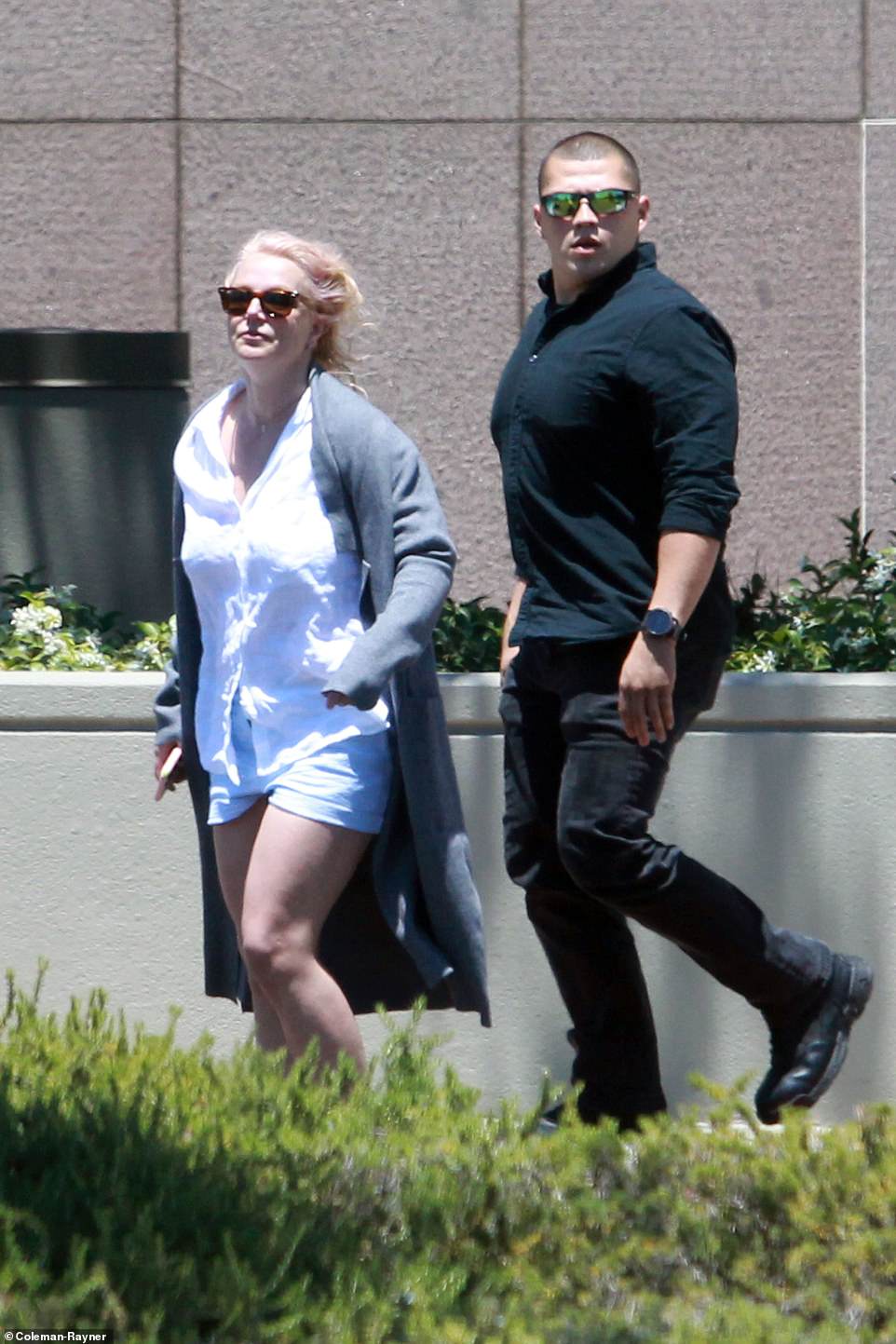 Guarded: Britney was accompanied by a bodyguard 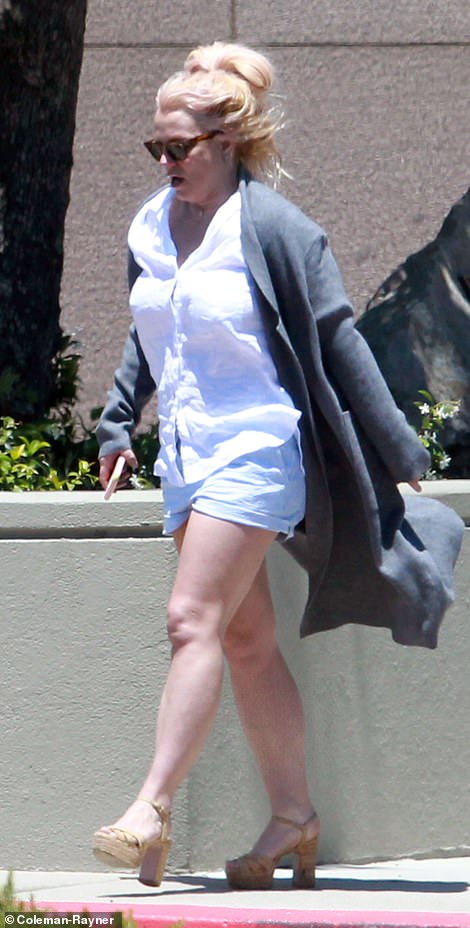 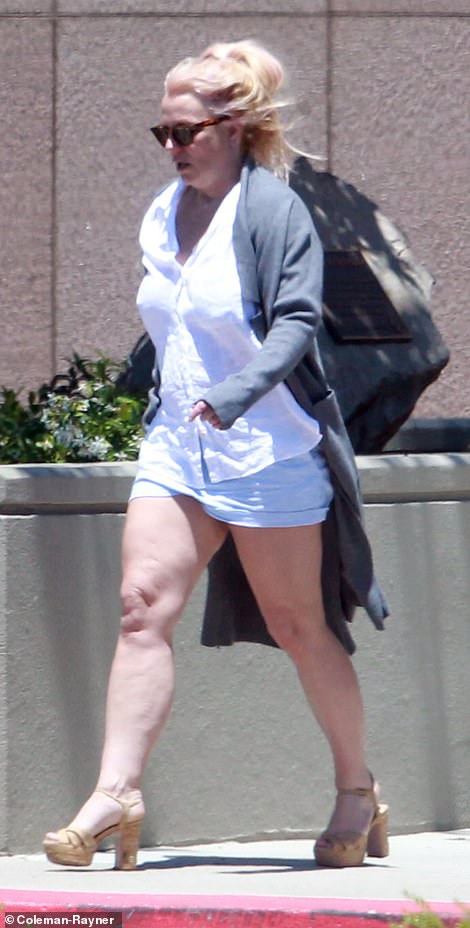 Casual: Spears donned a casual ensemble for her visit to the Ventura County Sheriff’s department 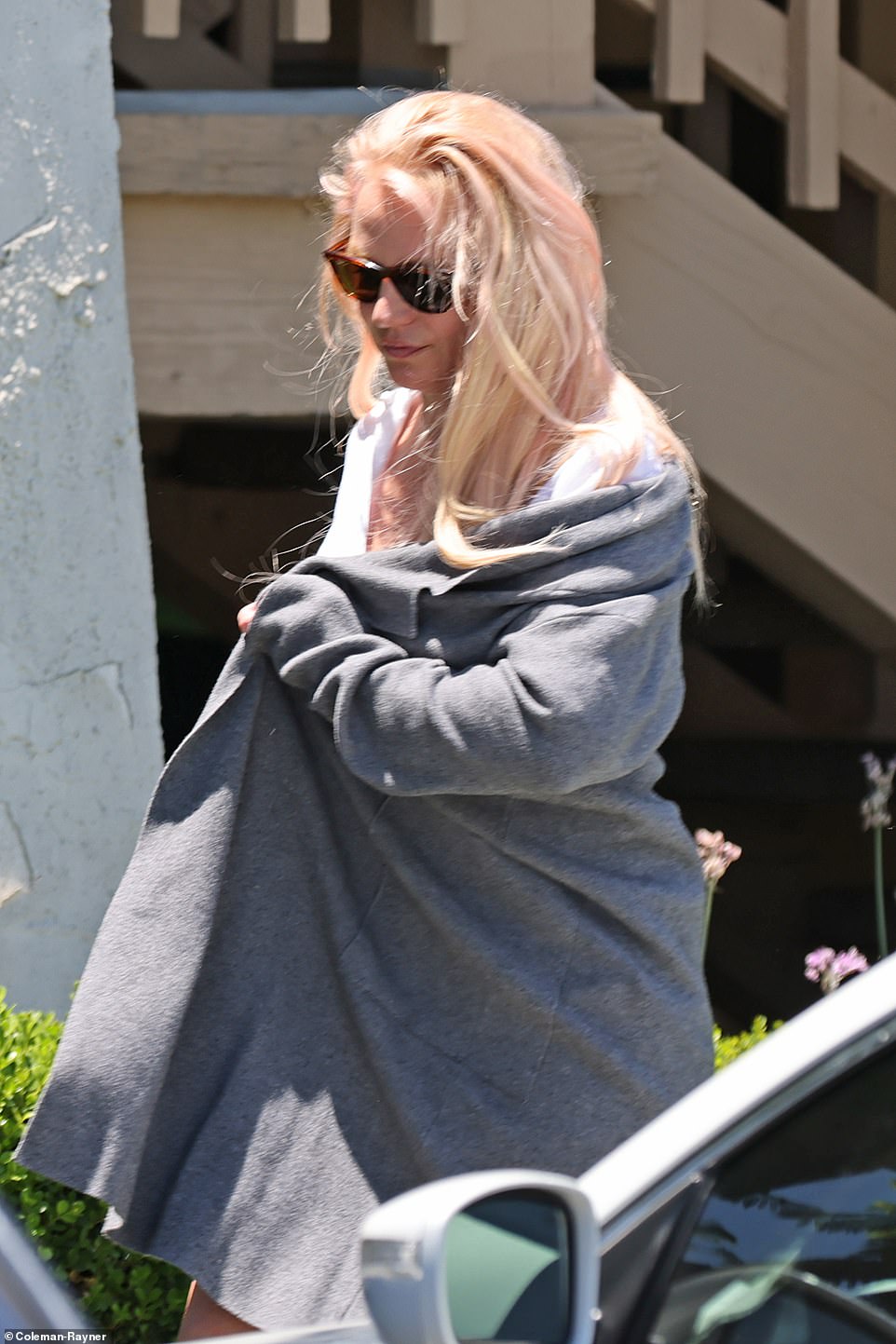 Covered up: The Womanizer songstress covered up with a grey longline cardigan 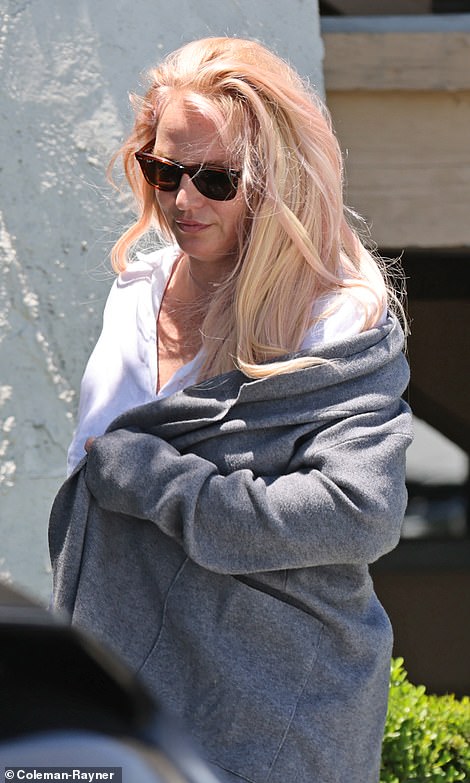 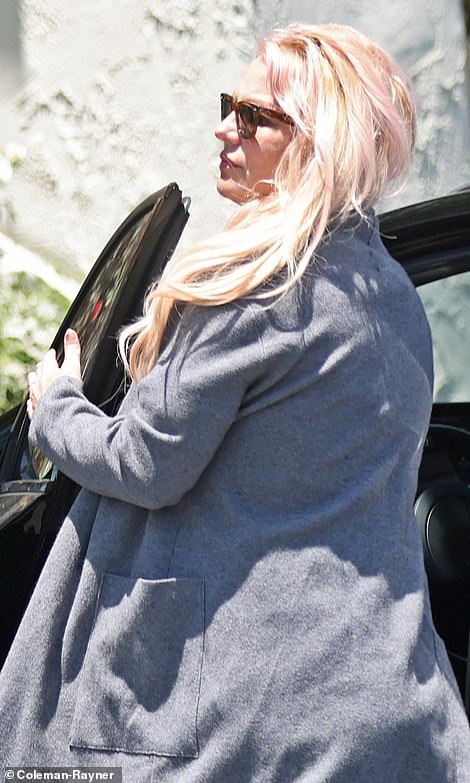 Flowing: She arrived to the Sheriff’s department with her long blonde hair down, before exiting with it styled into a messy bun

The Lucky singer’s outing comes after it was revealed that she told a court investigator in 2016 that her father had ‘too much’ control over her estate and was ‘oppressing’ her, as per newly unearthed records obtained by The New York Times ahead of Spears’ Wednesday court hearing.

Britney has been without control of her business or finances since her father obtained the conservatorship in the wake of her mental health struggles in 2008.

He says it is a smooth-running arrangement that allows him to protect her and that she can take control at any time. 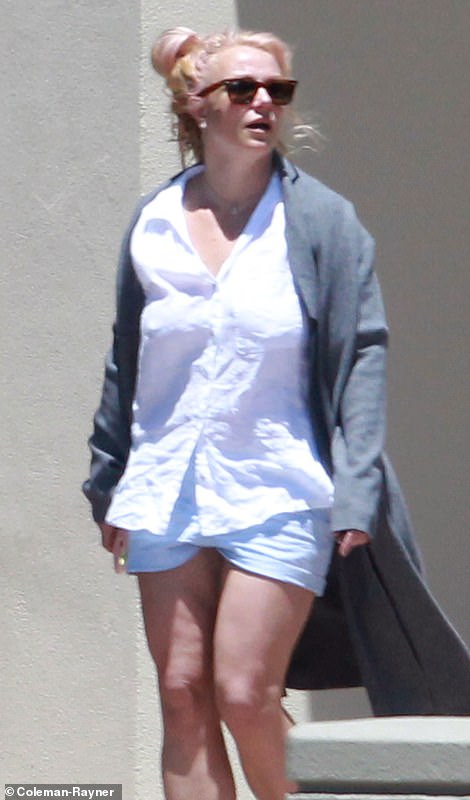 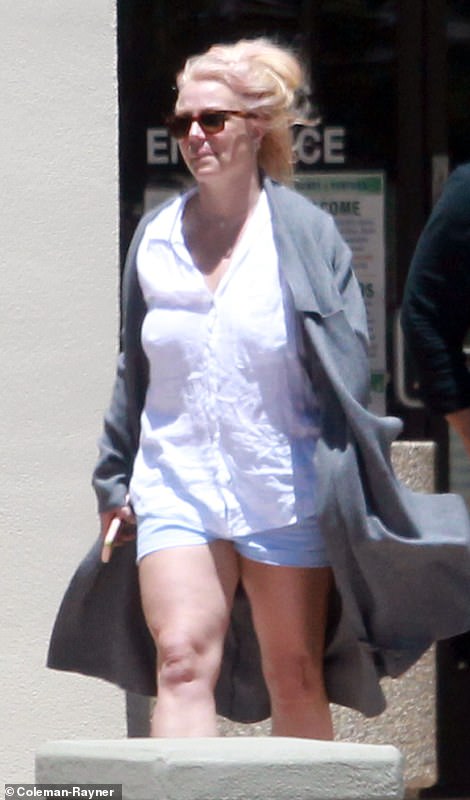 Layering: The Toxic hitmaker layered her cardigan over a crinkled white button up shirt and a pair of pale blue linen shorts 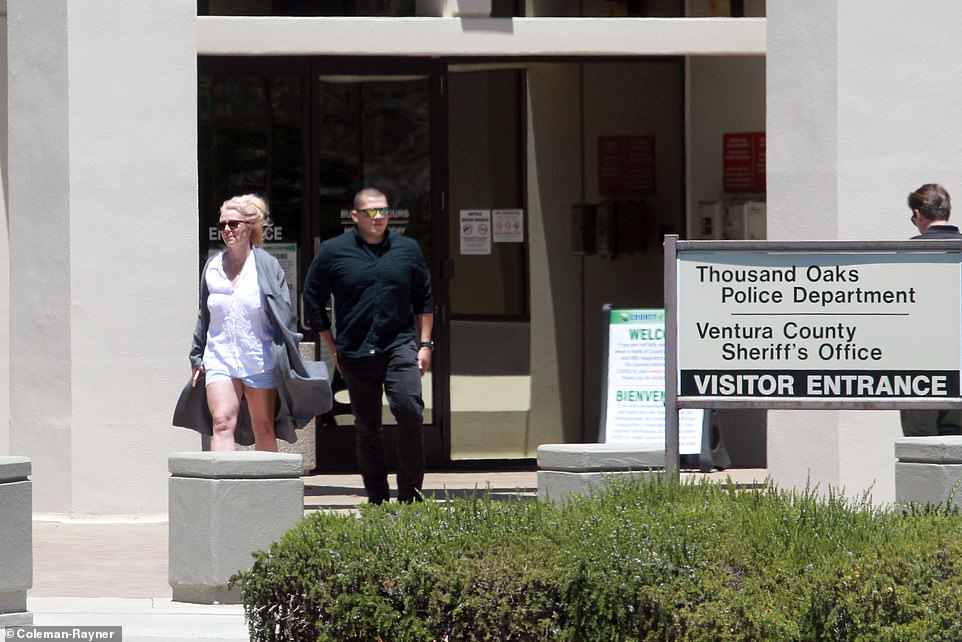 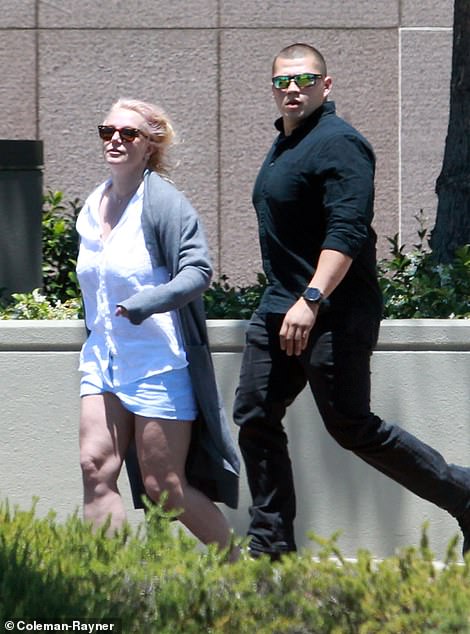 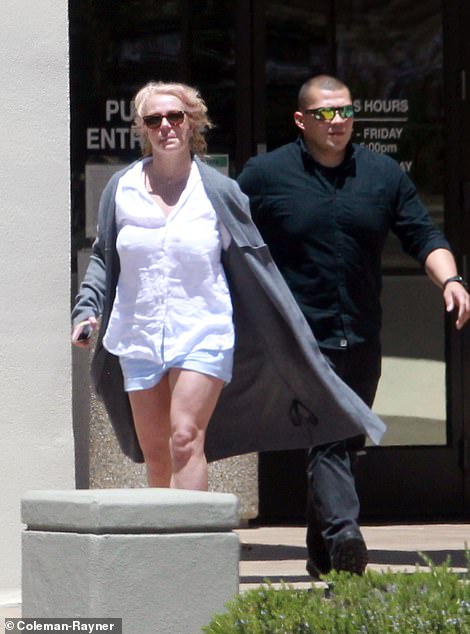 Natural: Britney’s complexion looked noticeably devoid of makeup and she concealed her brown eyes behind a pair of tortoise shell shades

Wednesday will be the first time Britney, now 39, addresses the court.

In the papers obtained by the Times ahead of that appearance, a court investigator wrote in a 2016 report that Britney told them the people involved in the conservatorship – her father and a lawyer – tried to intervene on who she dated and what color she painted her kitchen cabinets.

She complained that her father drinks too much and that it can impact his judgement too. 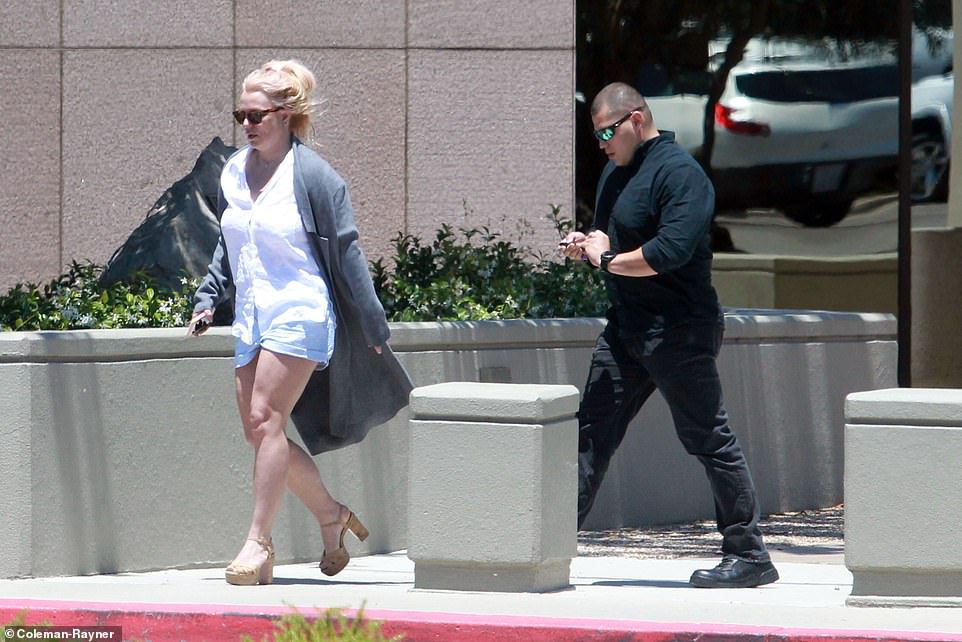 Heading off: With her bodyguard by her side, Spears made her way back to her parked car 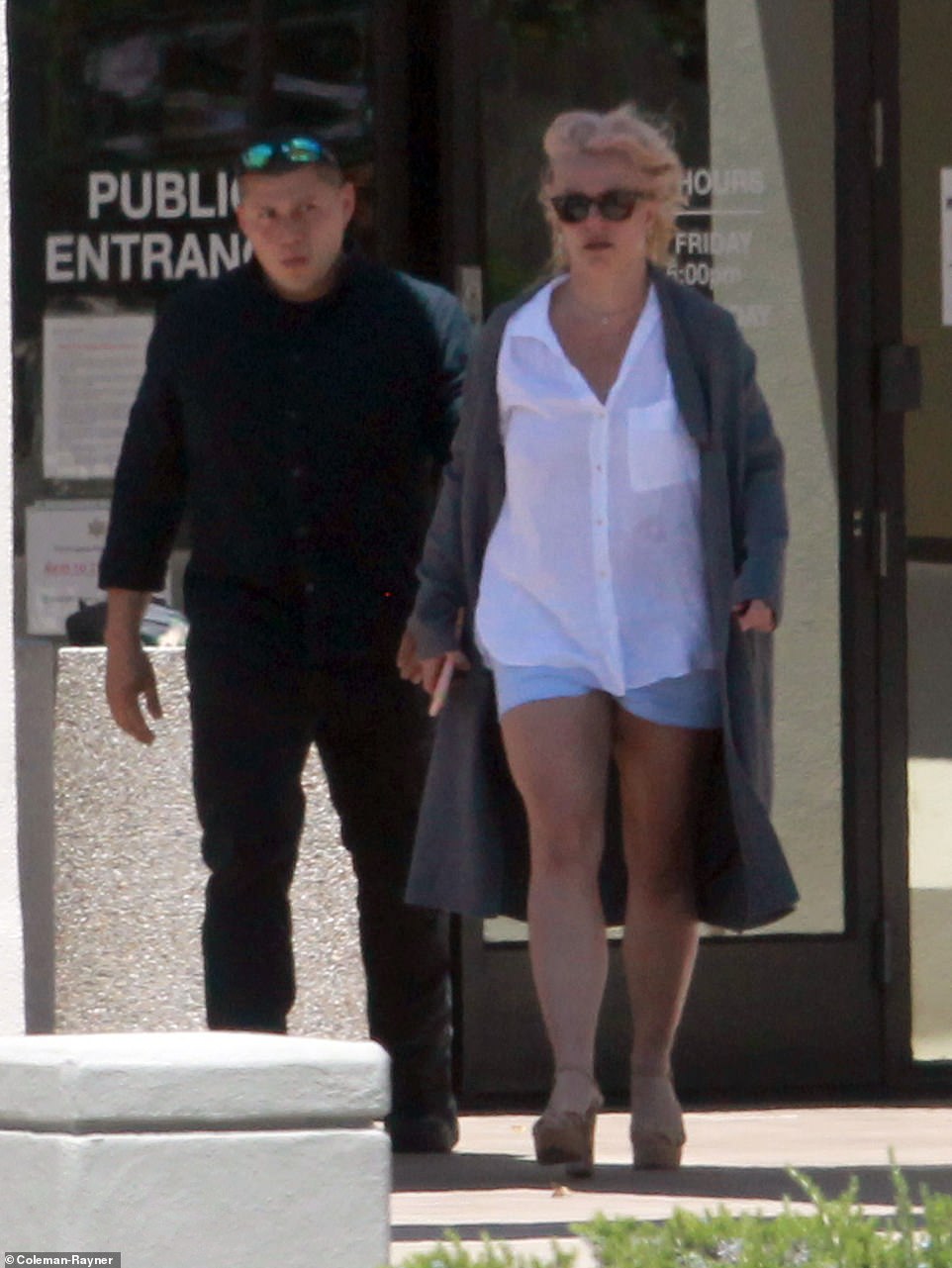 Bombshell: The Lucky singer’s outing comes after she told a court investigator in 2016 that her father had ‘too much’ control over her estate and was ‘oppressing’ her, according to newly unearthed records obtained by The New York Times ahead of Spears’ court hearing 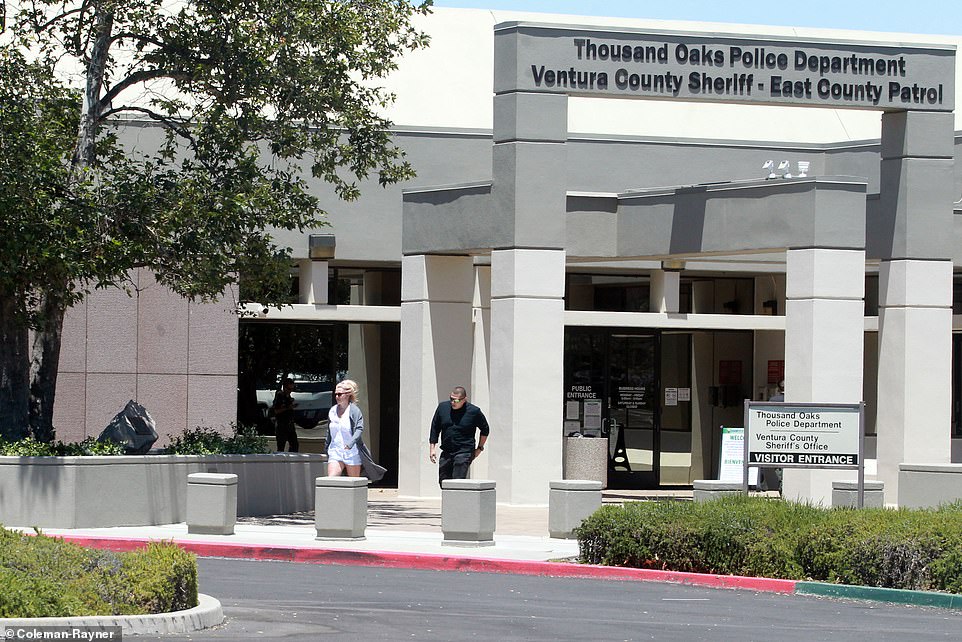 Overprotected: Spears was forbidden from re-painting her kitchen cabinets as it’s revealed the singer has been opposing father Jamie’s role as conservator for the past 7 years 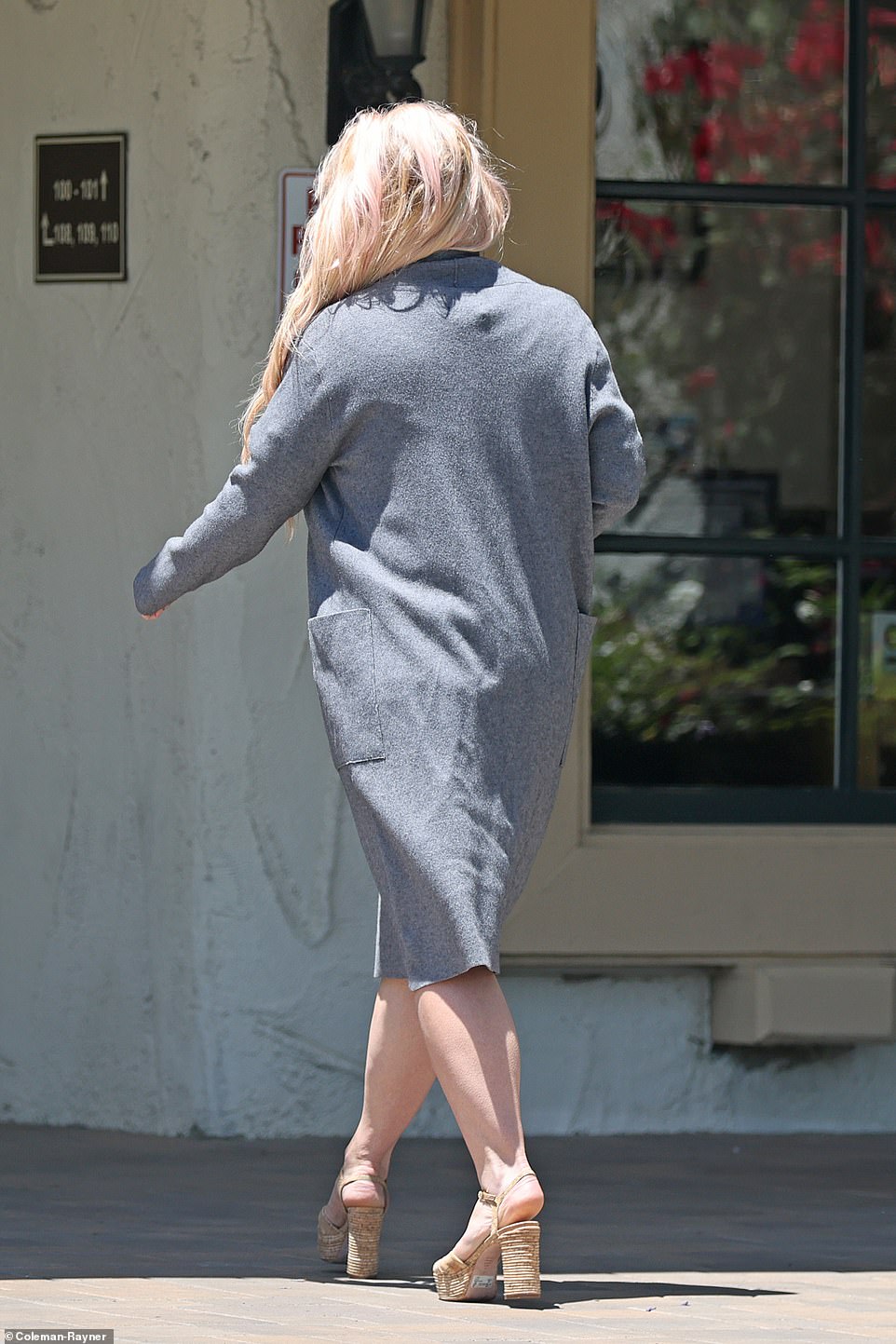 First time: Wednesday will be the first time Britney, now 39, addresses the court

In a 2016 report, a court investigator who had spoken to Britney wrote: ‘She articulated she feels the conservatorship has become an oppressive and controlling tool against her.

‘She is “sick of being taken advantage of” and she said she is the one working and earning her money but everyone around her is on her payroll,’ the investigator wrote.

She also said her father was ‘obsessed’ with her to the point that he had to approve who she became friends with.

Despite her complaints, the court investigator ruled that the conservatorship should remain in place. 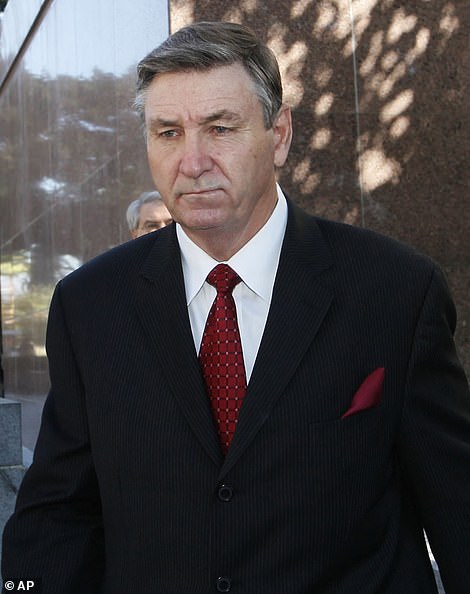 Control: Jamie Spears (pictured, 2012) has been in charge of Britney’s affairs since 2008

The records say that Jamie, a recovering alcoholic, drank and was abusive not long after taking control of the conservatorship.

Britney’s Circus tour in 2009 was supposed to not involve any alcohol for her benefit but, according to the testimony of a housekeeper, he was guilty of ;verbal abuse, tirades, inappropriate behavior and alcoholic relapses’.

During the conversation, Britney allegedly told the investigator she wanted the conservatorship terminated ‘as soon as possible’ and was ‘sick of being taken advantage of.’

The investigator added: ‘She is the one working and earning her money but everyone around her is on her payroll.’

Jamie, 68, was appointed as Britney’s conservator in 2008, after she was admitted into involuntary psychiatric care twice, as concerns grew over her mental health and substance abuse. 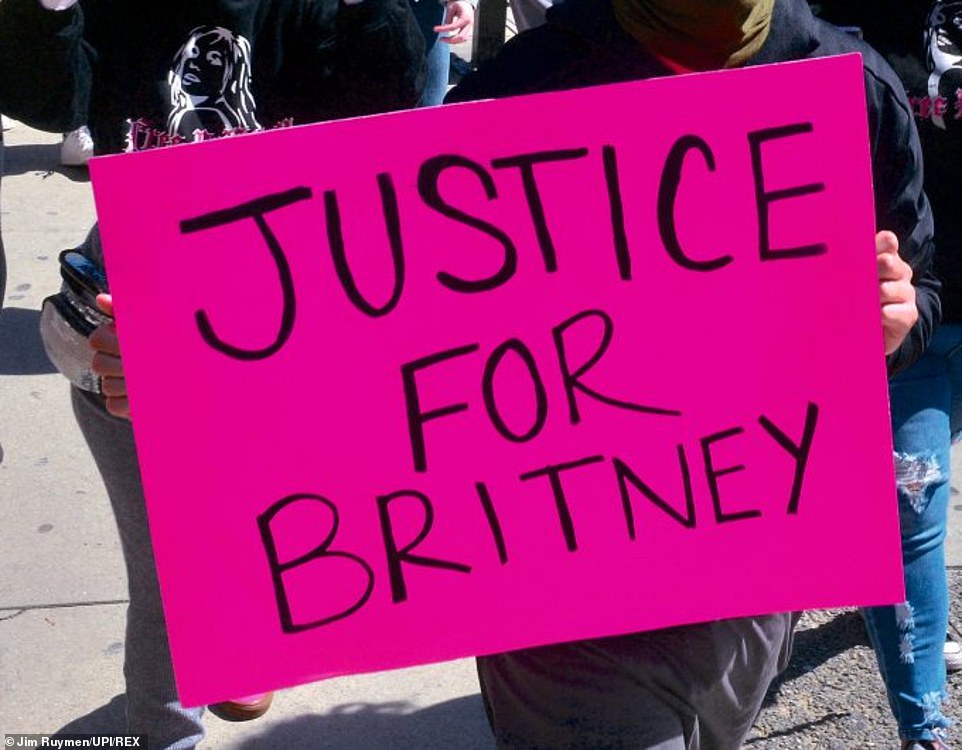 However, the court documents reveal that Britney first raised concerns over her father’s fitness for the role as early as 2014, when she had begun her years-long residency in Las Vegas.

Her court-appointed lawyer Samuel D. Ingham III said at the time that Britney wanted Jamie to be removed as her conservator, citing a ‘shopping list’ of grievances that including his alleged drinking.

Britney also told a court in 2019, that she had felt ‘forced’ into staying at a mental health facility as well as performing against her will by her conservator.

The singer claimed the enforced stay was under ‘exaggerated grounds’, after she made an objection during rehearsal, and also claimed she was forced to perform in Vegas while suffering a 104-degree fever.

According to the court documents revealed by the New York Times on Tuesday, Britney was limited to a $2,000 weekly allowance despite generating millions of dollars with her Vegas show Britney: Piece of Me.

Britney reportedly said in the documents that the conservatorship ‘comes with a lot of fear’ and any mistakes would result in ‘very harsh’ consequences.

Jamie – who went to rehab for alcoholism in 2004 according to court filings – is known to be a strict parent, and Britney’s mother divorced him 2002 following troubles in their marriage.

Despite releasing her ninth album and performing more than 50 times in Las Vegas in 2016, Britney was privately fighting against Jamie having control of her life, the documents allege.

The pop singer told the investigator she was ‘very angry’ about how her life was being run, revealing she had security around her at all times.

She was forbidden from making cosmetic changes to her kitchen cabinets by Jamie who told her it was too costly.

But Britney is said to have been unwillingly footing the bill for the conservatorship that she is keen to get out of – having to pay lawyers on both sides of the argument with a recent bill from Jamie totaling $890,000.

In 2019, Britney dramatically announced she would be taking an ‘indefinite work hiatus’ which was originally put down to her caring for father Jamie after he almost died from suffering a ruptured colon. 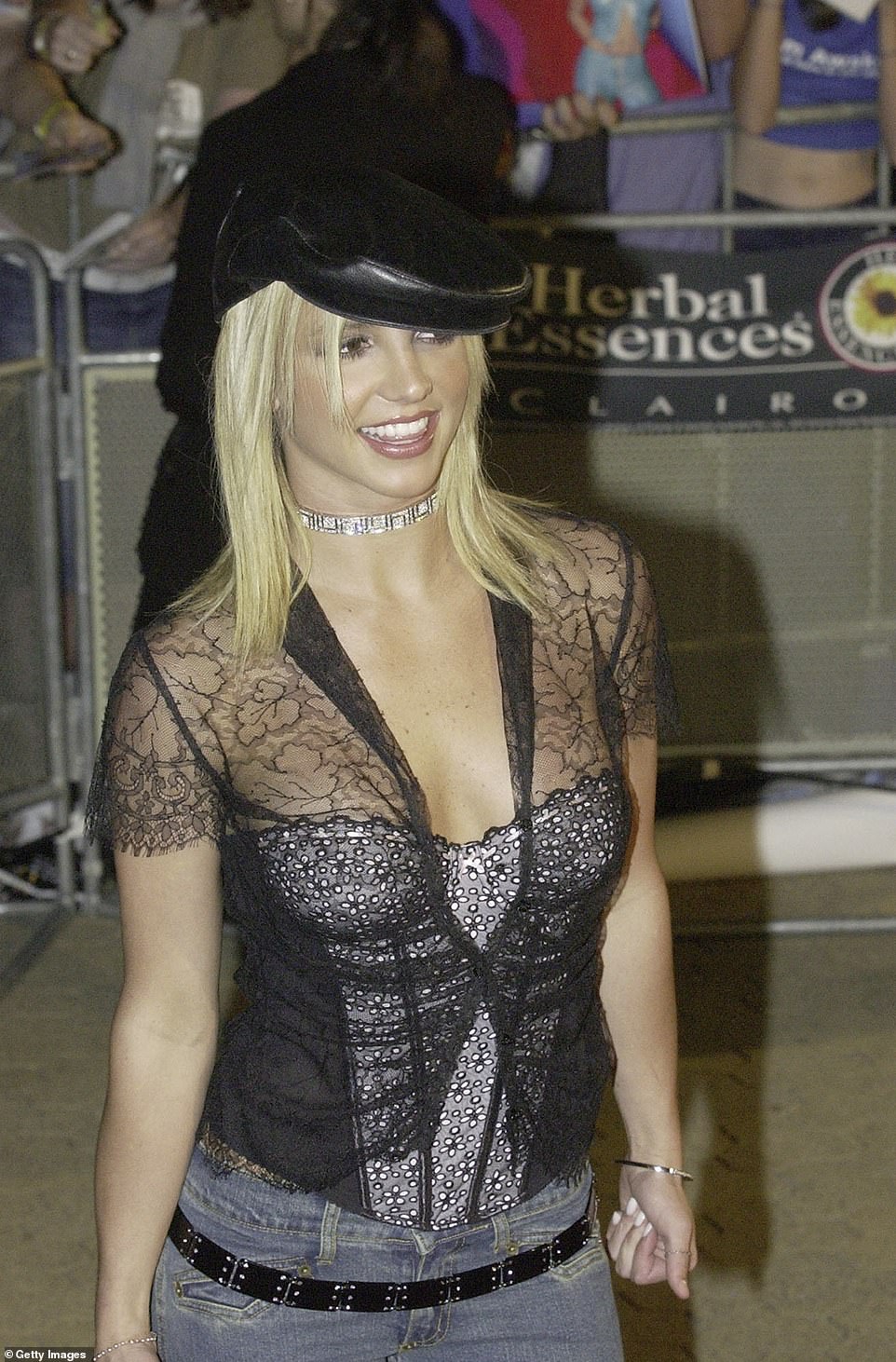 Way back when : Jamie was appointed as his daughter’s conservator in 2008 following her very public mental and emotional breakdown (seen in 2002)

However, during a closed-door hearing that was mistakenly unsealed, Britney alleged that she had been forced into a mental health facility against her will, as punishment for standing up for herself during a rehearsal.

According to the NYT report, Britney’s father Jamie recently returned home to Kentwood, Louisiana, where he hosts crawfish boils and is living in an RV that is parked by a warehouse that holds memorabilia from his daughter’s career.

Tomorrow, Britney will virtually address the Los Angeles County Superior Court and Judge Brenda Penny about her desire to have her father Jamie removed as her sole conservator.

In a press release, the court confirmed that for the hearing on June 23rd ‘all parties, including Ms. Spears, are scheduled to appear remotely’.

It is not expected that Britney will ask to end her long running conservatorship at the hearing.

Rather, she will request that the judge permanently remove her father Jamie from being in control of her estate.

Britney has appeared to be in favor of the temporary conservator currently in place, Jodi Montgomery, who stepped in back when her father fell ill.

In court documents, the A-lister’s lawyers have explained that their client would like Montgomery to be permanently put in place in lieu of her dad Jamie.

Pop star Britney Spears has been under a court-appointed conservatorship, or guardianship, since 2008. On Wednesday, she is due to make a personal address to the Los Angeles judge who is handling the conservatorship.

WHAT IS A CONSERVATORSHIP?

A court-approved arrangement in which a person or organization is chosen to protect and manage the personal care and/or finances of a person whom a judge has found to be unable to manage his or her own affairs.

IN WHAT CIRCUMSTANCES IS A CONSERVATORSHIP APPROVED BY THE COURTS?

When someone needs help taking care of his or her daily needs, managing their finances, or gives away large sums of money to strangers. Many are elderly people, or developmentally disabled, or people with temporary or permanent mental or physical disabilities. Details about the personal health of the conservatee is not made public. A court-appointed investigator is required to make a personal visit and submit a status report about the conservatorship every two years.

WHAT ARE THE DUTIES OF A CONSERVATOR?

A conservator can be a relative, friend or professional entity. Duties include deciding where the conservatee will live, making arrangements for their health care, housekeeping, transportation, managing finances, paying taxes and bills, making investments, protecting assets, accounting to the court for management of finances and reporting to the court on the status of the conservatee. Any changes require court approval.

WHO ARE THE CONSERVATORS IN THE BRITNEY SPEARS CASE?

HOW MUCH FREEDOM DOES A PERSON UNDER A CONSERVATORSHP HAVE?

Restrictions are determined by the court depending on individual circumstances. Since 2008, Spears has performed multiple concerts, been on several tours, recorded several albums, goes shopping, posts frequently to her Instagram account, has a boyfriend, gets an allowance and has gone on vacation.

HOW CAN A CONSERVATORSHIP BE BROUGHT TO AN END?

The conservatee, or a relative or friend, can ask the judge at any time to end the conservatorship. A court appointed investigator would evaluate the case and hear from all sides. The conservatee must prove they can handle their own personal and financial affairs. The judge would make a decision. Spears has not made such a request. The court can remove a conservator who is failing to perform their duties and appoint a new one.

WHY HAS THE BRITNEY SPEARS CASE ATTRACTED SO MUCH ATTENTION?

It is unusual for someone of Spears’ age and high profile to have been under such an arrangement for 13 years. Details of her mental health issues have never been revealed. The fan-based #FreeBritney movement, started in 2019, believes Spears is being held against her will and that she is sending cryptic messages through her Instagram postings. The 2021 TV documentary “Framing Britney Spears” brought wider attention to the case.

WHAT IS BRITNEY SPEARS EXPECTED TO SAY ON WEDNESDAY?

Neither Spears nor any of the attorneys in the case have said what the singer plans to speak about. She is not expected to attend the Los Angeles court in person but to speak via audio and/or video link. The last time she spoke to the judge, in May 2019, the hearing was closed to the public and her testimony was sealed.