Picture of daughter and father shows the pair breaking four road rules – so can you spot them?

Simple picture of father and daughter on a road trip shows the pair breaking four rules that could cost them $1,958 in fines – so can you spot what they’ve done wrong?

An Australian insurance company has posted an image asking the public to spot the four laws being broken – sparking an intense online debate.

The Royal Automobile Club of Queensland published the image on its Facebook page requesting followers to identify the four road rules not being adhered to – with many suggesting there were more.

The picture shows a young woman driving an older man with their dog seated in the back.

The RACQ confirmed the four laws being broken in the photo were: a dog unrestrained in the back seat; the woman having her phone on her lap; the man failing to wear a seat belt correctly; and the driver’s view through the back of the car restricted by luggage. 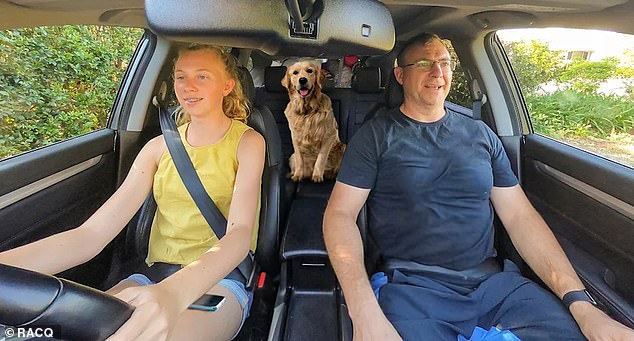 Can you spot the four road rules being broken in this image?

Most people identified the obvious four laws being broken and correctly commented on the post – but there was disagreement over the number of illegalities.

Several users said there were five or even six road rules in dispute, noting the rear vision mirror was not correctly placed and the young woman’s thumbs being tucked under the steering wheel.

One user said the fifth broken rule was the older man wearing ‘two-tone pants’ while another said it was a ‘Taylor Swift CD playing’.

‘Someone is on their bonnet taking photos. Very dangerous,’ another said. 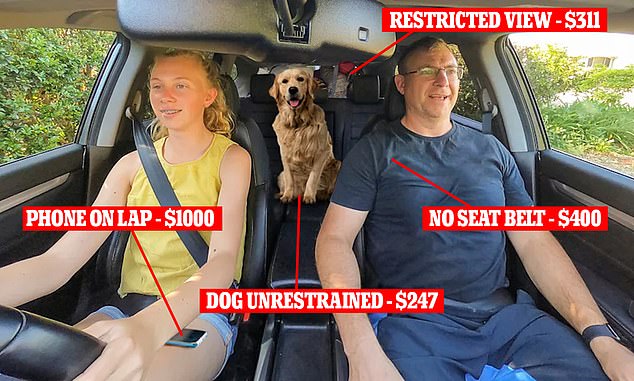 In Queensland the woman would be hit with a $1,000 fine and four demerit points for having her phone on her lap while the unrestrained dog would attract a $247 fine.

She would also be fined $400 and three demerit points for her passenger not buckling up and $311 for blocking the rear view with luggage.

The amount would total $1,958 if she was caught by police driving as she appears in the photo.

A spokeswoman for the RACQ told Daily Mail Australia the post was designed to create awarnesss about safe driving.

‘The penalty in Queensland for not wearing a seatbelt is $400 and three demerit points for drivers and passengers aged 16 years or older so both the occupants in the car could be fined,’ she said.

‘The others are unsafe behaviours, but there’s no specific law in Queensland against them. A phone on your lap could be a potential distraction and we urge drivers to set their phones then leave them alone so they’re not tempted.

‘An unrestrained pet in a car could be very dangerous, especially in a crash as it could become a missile. While in Queensland it is not an offence to have a dog unrestrained inside a car, you can be fined for having a dog on your lap while driving or if the dog interferes with the driver’s control of a motor vehicle.

‘While the back window isn’t fully blocked, it could be obscuring the driver’s view. While there are likely other mirrors available to use we’d recommend you can see clearly though your rear-view mirror at all times. In extreme cases in Queensland it could be determined your vision is blocked and you don’t have proper control of the vehicle and you could be fined $311.’

Dogecoin Price Crashed Heavily Amid SNL Event, Will It Ever Hit $1? 2021

Michael Jordan was named Sporting News' NCAA Player of the Year in the 1982-83 season with...

Dogecoin Price Crashed Heavily Amid SNL Event, Will It Ever Hit $1? 2021